Topics related to peak bagging, rock climbing and bouldering in the foothills and high country of the Sierra Nevada. Be sure to also check out the Information Booth forum category to learn from / see if you can contribute to a profile for High Sierra 13'ers, 14'ers and cross country passes.
Post Reply
8 posts • Page 1 of 1

Late October and it is still ridiculously warm in the mountains. I got a late start and headed up the Mountaineer's Route. The part from the main trail to Lower Boy Scout Lake is always steeper than I remember; how is that possible? After that, though, it feels like a normal trail. I turned onto a use trail up to Thor Peak for a very short ways before quickly reorienting myself. Ran into another hiker, and we both crossed over an icy stream and headed up the slabs to Upper Boy Scout Lake. This is my favorite part of the trail. 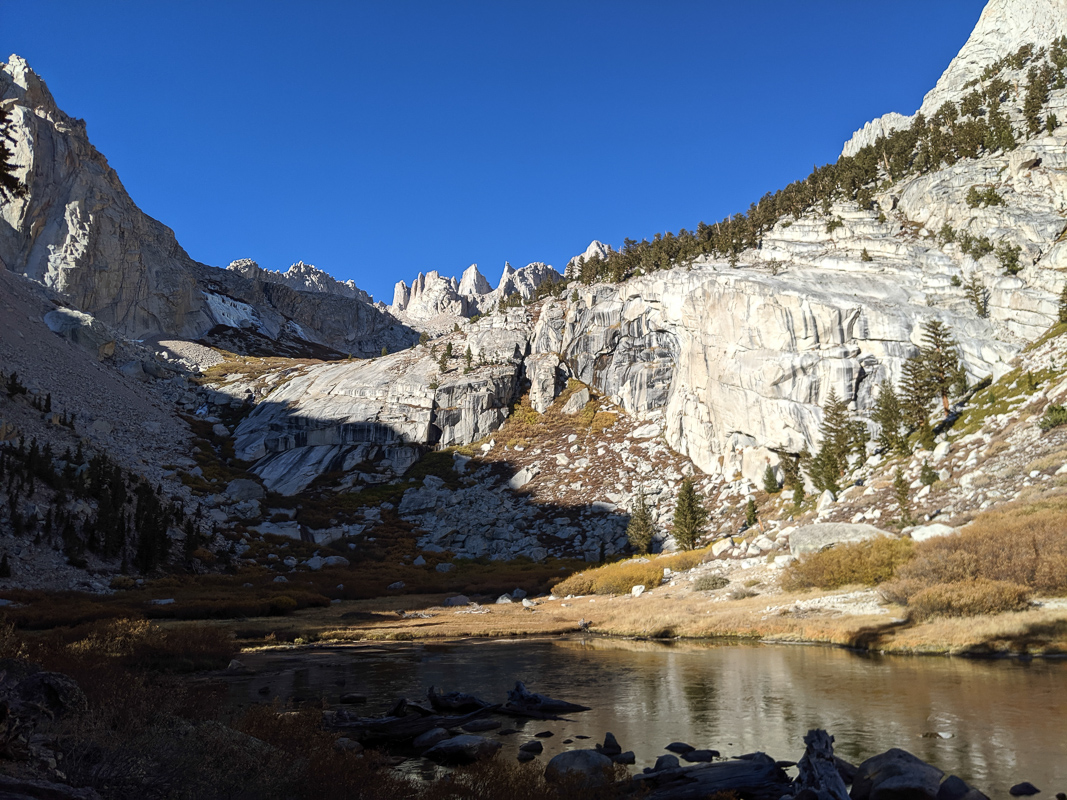 At Upper BSL, I turned north to get to Russell-Carillon saddle. A little tedious, but not terribly sandy. And just like the topo map shows, it really does flatten out almost completely at 12800'. The last ~500' is really just a pleasant stroll. From the saddle I caught a view of Tulainyo Lake and an ice-covered lake a bit higher up. 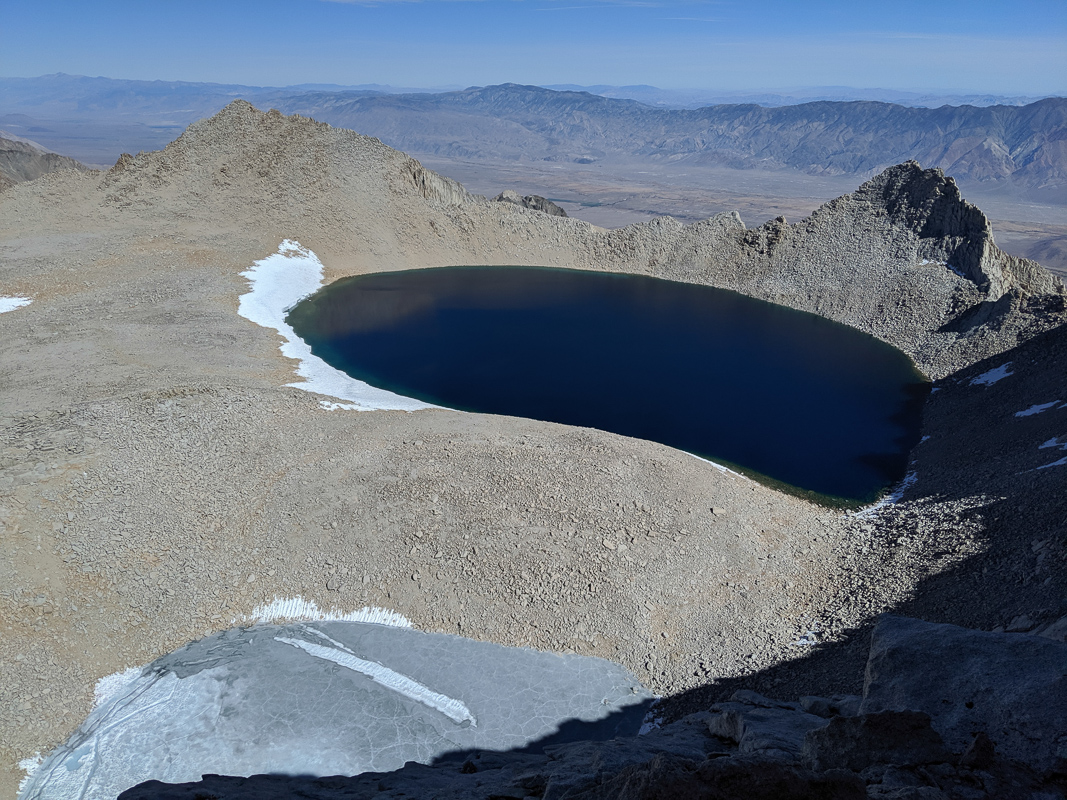 The ridge to Mt Russell is lots of fun. You can play it totally safe—stay S of the ridge until almost to the lower, eastern peak, then N of the ridge to the summit. Everything clearly goes and parts are even cairned. But it is more fun to stay right on the ridge. You can't be sure if it is going to go… but it generally does. There wasn't much exposure—the pictures make it look worse than it is—but it is still a joy to be walking along a narrow ridge high above everything on a beautiful day.

Sidewalk in the sky: 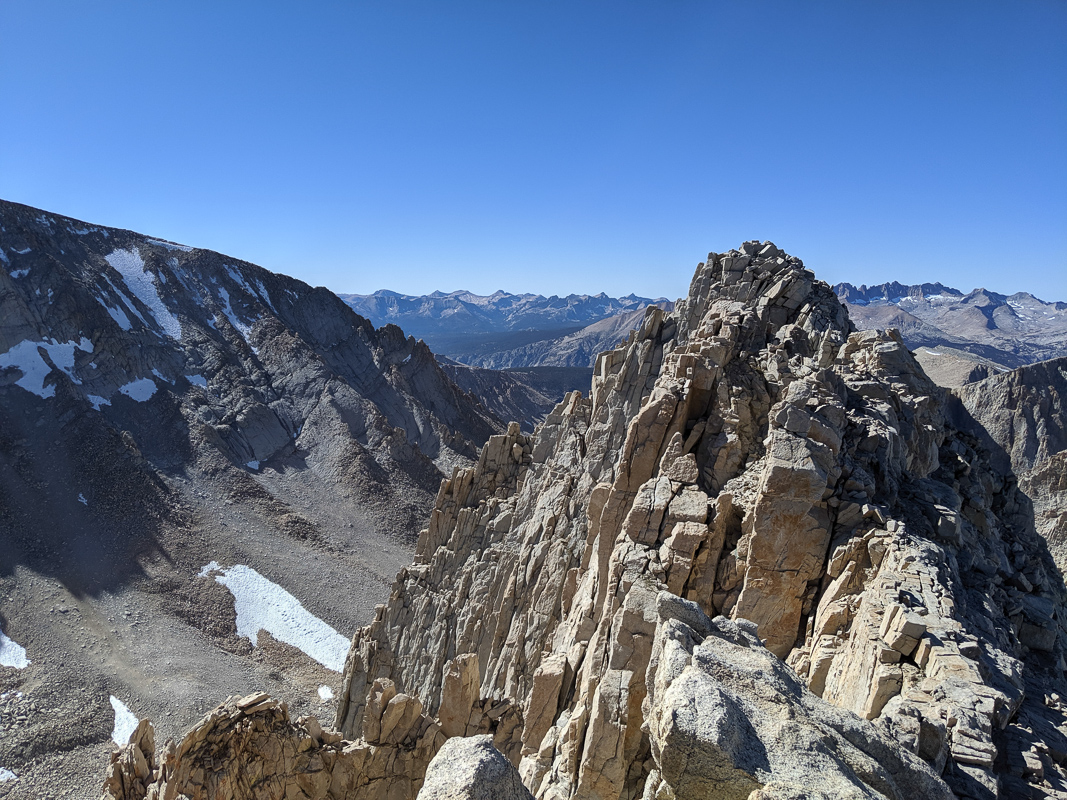 At the summit I took the obligatory photos (which I'd been taking the whole way), and had lunch. It was still early, too early to go home. There are other mountains around Tulainyo Lake, but nothing was singing to me. Instead I headed down the S face. From the summit of Russell, this is the *second* obvious big chute east (the first chute west of the lower summit). There are lots of rope anchors set up at the top, but they are just for two moves and really very easy ones. (I suspect that people use ropes because everyone else uses them? Or maybe for winter climbs.) After these moves, it is a standard scree chute, where the rocks are fairly stable and aren't covered with kitty litter.

Whitney's north face looked like it would go. I was particularly tempted to try because the party before me had written in Russell's summit log, roughly, "Planned on doing Whitney N face, but it looks too scary." Come on, it's almost Halloween! It looks like Bob Burd has gone up the third main ridge to the right (west) and another TR goes up the fourth ridge, claiming some class 4 at the top. I started on the fourth ridge and toward the top went over to the third ridge to get closer to Whitney's summit. Maybe there was a class 3+ move or two, but just because I was looking for them. It was quite fun climbing, everything solid, steep but not scarily so.

Whitney summit of course was a nuthouse. People talking on their phones, etc. I found a huge piece of trash, someone's poster, and managed to stuff it in. I don't mind people, but was also happy to leave. 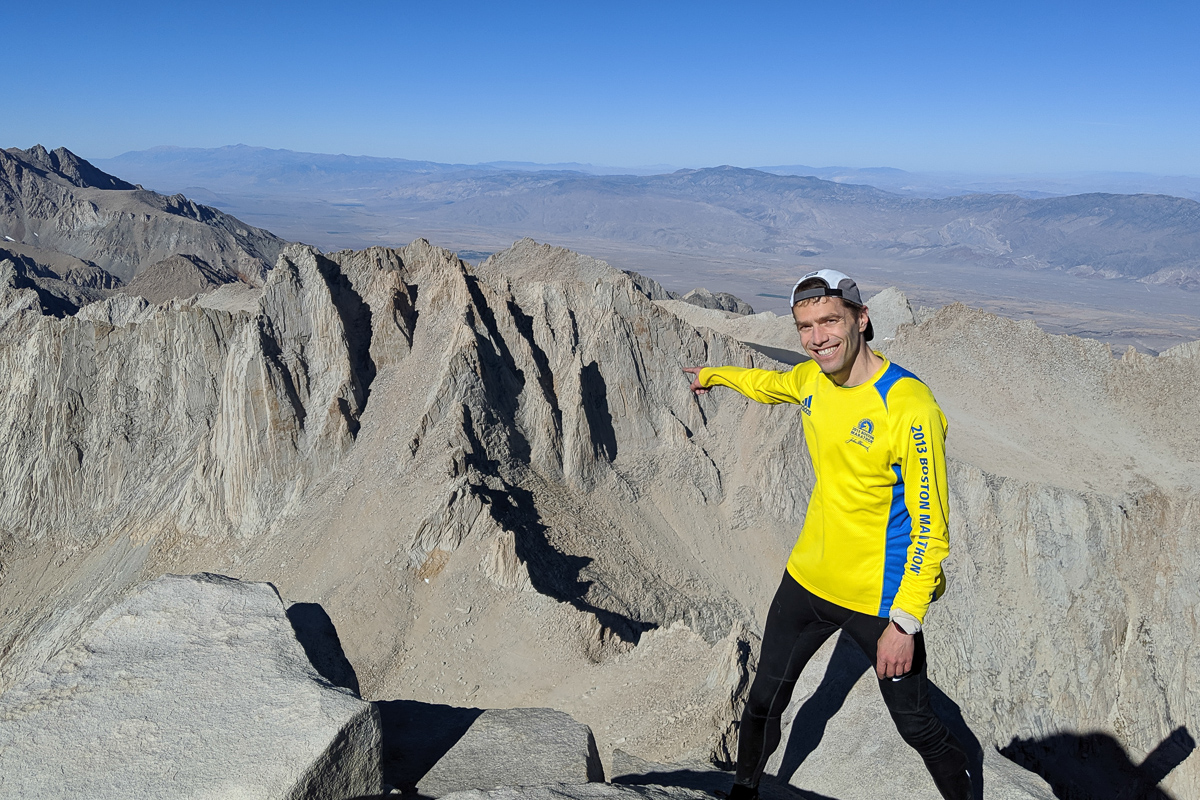 I dropped down the Mountaineer's Route, starting left of the ice field then cutting across to its right (eastern) side. So easy. I remember the first time I climbed this we rappelled down. Granted it was winter so we all had gloves and mountaineering boots…

At the Notch I turned down the chute. I actually ended up taking the right (southern) chute because I was curious if it would go (it looked more solid than the scree in the main chute) and because coming down to it I discovered… the same hiker I'd run across above Lower Boy Scout Lake! This was ~1000' below the summit. I was rather worried, because it was almost 4:30. I tried to convince her to turn back, then gave her beta on the route above the notch. A couple minutes later, seeing how slowly she was moving I ran back up. She did seem to have the right gear, including clothing and GPS, it was a very warm day, she said she'd hiked down the main trail in the dark before, and there are plenty of people and cell phone service on the summit. I still think it would be smarter to turn back, but what do I know? The MR in the dark is a bit trickier than the main trail, but you can make mistakes even on the main trail. In the end I wished her the best.

Racing the sun down: 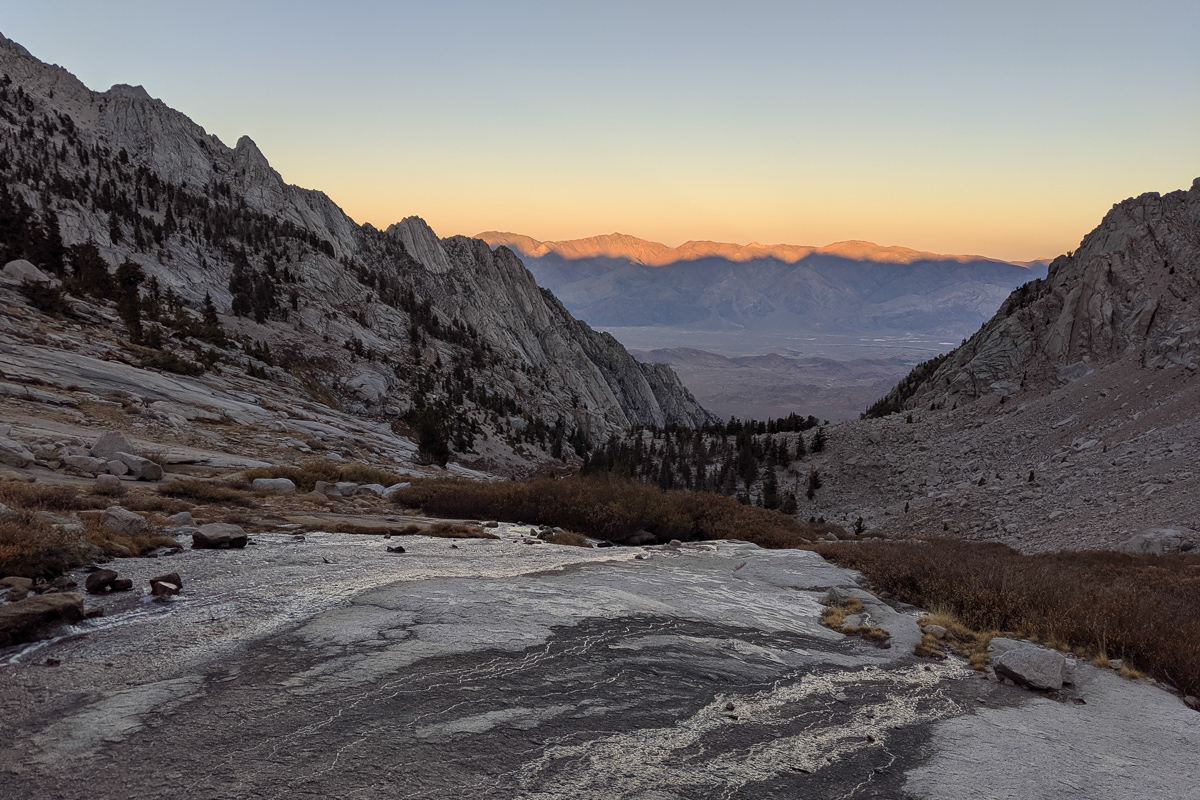 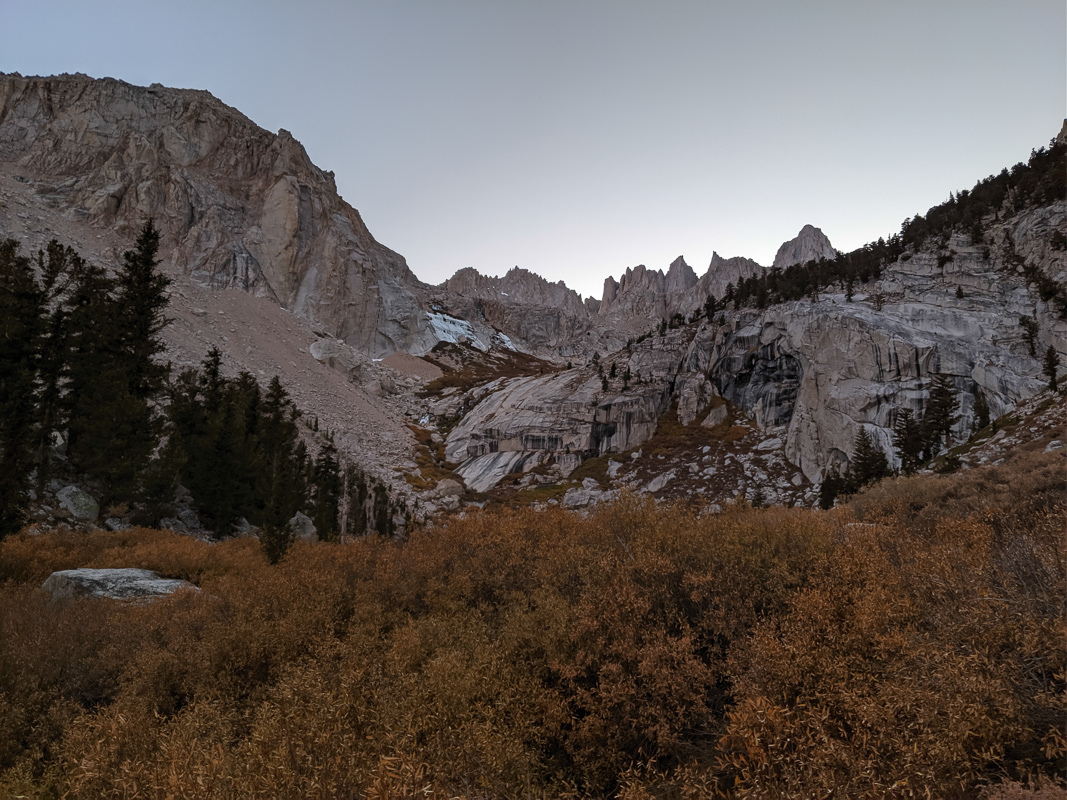 I had last filled my water in a side stream below Lower Boy Scout Lake, and had finished it descending Russell. My mouth was a bit dry, but I don't know that I particularly trust Iceberg Lake. I raced the sun down to the Ebersbacher Ledges, which I covered in the last light. (I've descended them before in the dark, but still.) Then I turned on my flashlight and took the main trail back to my car. And drank some water. 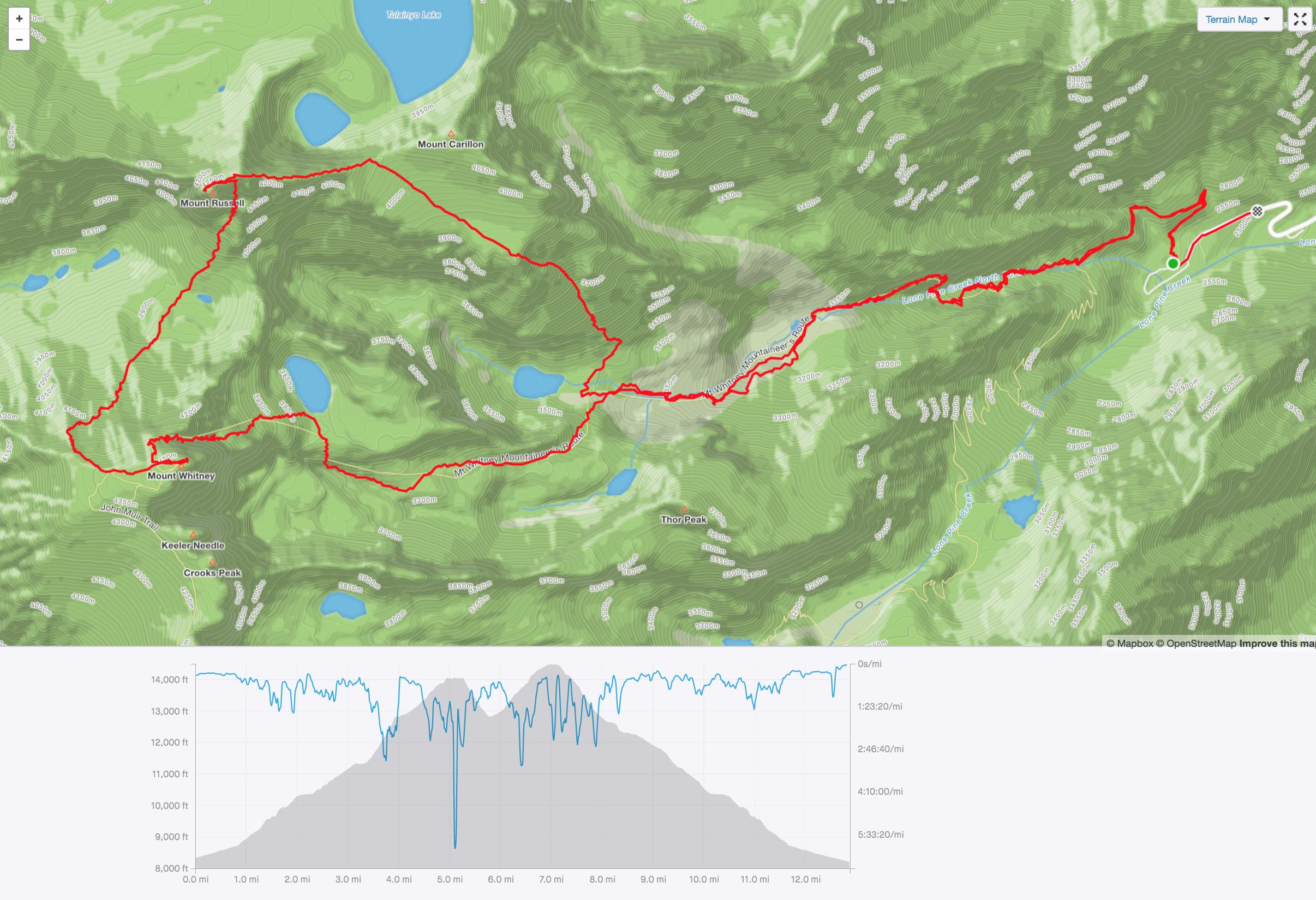 Wow what a great adventure - very impressive day - you must be in killer shape, you made me want to climb that ridge on Mt. Russel! Congrats and thanks for sharing the excellent report.
Top

Just another reminder that I'm fat and slow, thanks.
"Adventure is just bad planning." - Roald Amundsen
Also, I have a blog no one reads. Please do not click here.
Top

Great pics and awesome route! Thanks for sharing - and congrats
Top

Congratulations on pulling off such a fine route. That's a really impressive day trip! You give us good advice, and inspiration, but I think the coolest thing of all is your caring for your sister mountaineer.

I was rather worried, because it was almost 4:30. I tried to convince her to turn back, then gave her beta on the route above the notch. A couple minutes later, seeing how slowly she was moving I ran back up. She did seem to have the right gear, including clothing and GPS, ... she said she'd hiked down the main trail in the dark before, ... In the end I wished her the best.

That was perfect. Kudos.
Top

I've been out nearly every weekend this summer, so am reasonably acclimated and have learned a lot about my limits. But I've enjoyed reading everyone else's TRs so much that I felt I needed to share at least one.

@Harlen, that's the other reason I wrote this TR. I wasn't sure what is best practice. I don't know if there's something I should have done differently.
Top

I wasn't sure what is best practice. I don't know if there's something I should have done differently.

Every situation is unique, and there are differing opinions on safety. The best part of your response was that you were willing and able to hike back up to the person, and check her out. You checked out her gear; you found out that she had the right experience- having descended the Whitney Trail in the dark before; and we suppose that you assessed her attitude and saw that she was confident rather than freaked out. I think that wishing her luck was the right response under those circumstances. Had you given her dire warnings you might have shaken her confidence.

I travel w/o any devices beyond map and compass, but someone might ask if you assessed her ability to summon a rescue via "Spot," or whatever???

Many of us have had these sort of experiences, and when they come along, they are an interesting challenge. I have thrown a rope to people; I've sat and watched shaky-looking climbers descending till they were safe; and recently, I feel I really blew one on Shasta by not making sure an injured climber had made it back to his camp. http://www.highsierratopix.com/communit ... =8&t=19414
Your question about the "best practice" in these situations is an interesting one that would make an good Thread of its own. Again, great trip Tie!
Top
Post Reply
8 posts • Page 1 of 1