TR: A Tale of Two Peaks

If you've been searching for the best source of information and stimulating discussion related to Spring/Summer/Fall backpacking, hiking and camping in the Sierra Nevada...look no further!
Post Reply
21 posts

I was going to do a quick loop over Army into the 'Yeager' watershed, and then out via Cottonwood. However, when picking up my permit, I decided to exit out of Whitney. I haven't been up there in years, so I figured it was worth a (re)visit.

After getting dropped off by Dave Sheldon late Monday afternoon, I hiked to my favorite lake for the night. In the morning, I took this shot of Mt Scree, a stopover on the way up the basin. 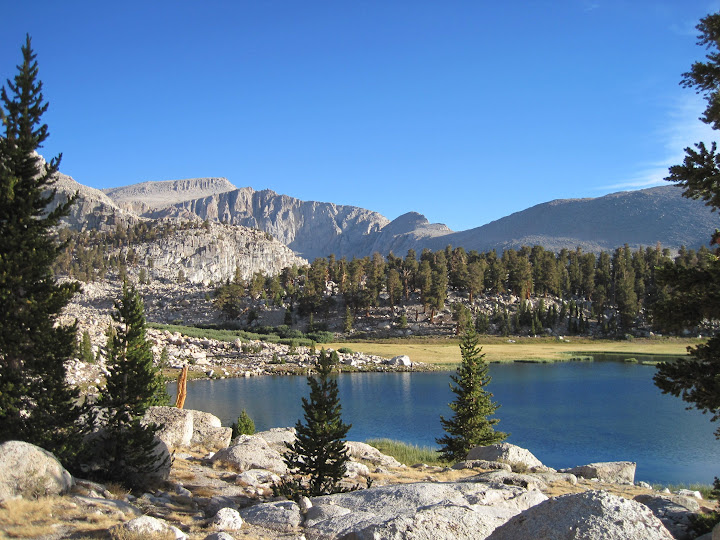 As usual, I went up NAP. I was persuaded to avoid Army by a member of the SAR recovery team, who mentioned three guys almost went down amongst the boulders the day they found the body. I guess the monsoon rains have really done a number on the old trail. While having a snack by the registration box, I took this shot of the destination of the next day+1: 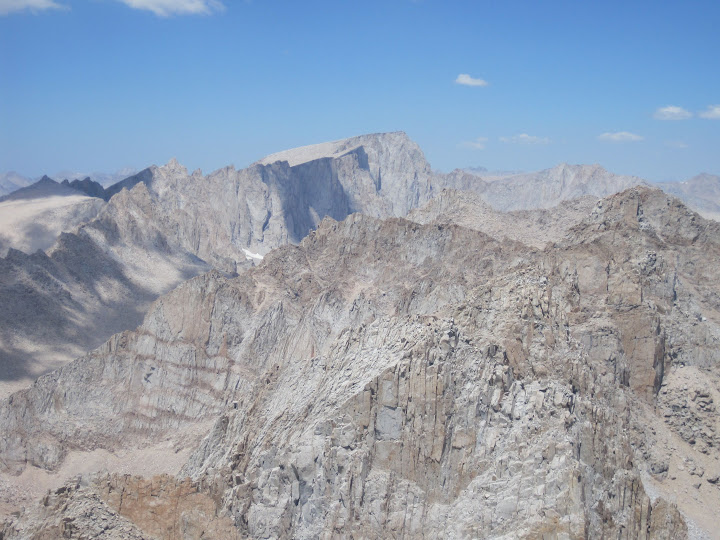 After skiing down the scree chute under the Mjr general, 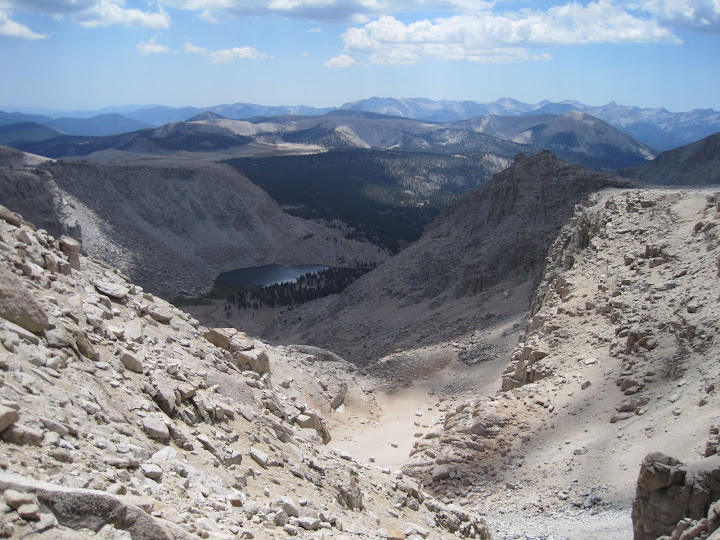 and cutting through the (upper) soldier's keyhole, 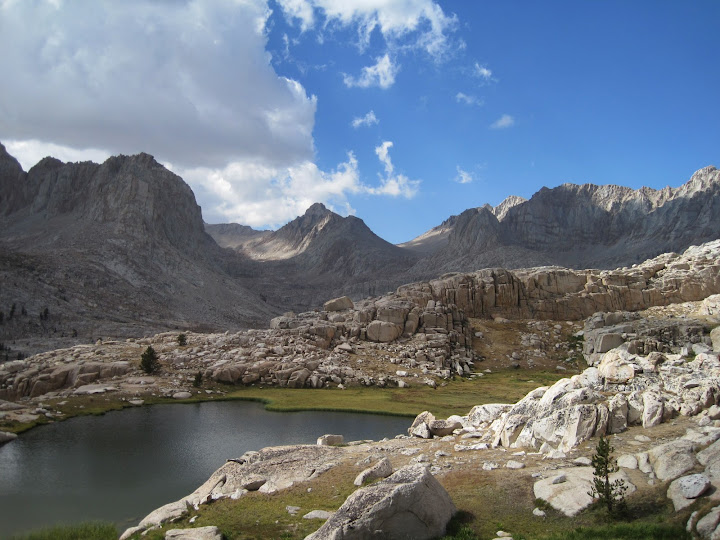 I spent the night @ the base of eponymous lake in the blue sky basin. There was a group of 4 SC members already set up, and as I was considering the weather, they invited me to stay there amongst the trees with them.

It's a good thing I did, because around midnight, we had our very own thunder & lighting show right above us courtesy of a monsoon flow. Not that trees offer much, if any, protection, but it at least it seems safer than being next to the lake with -0- cover. After much rain & even hail, the morning dawned bright & beautiful. Here's a shot of the inlet where I caught a few GT looking back at the previous day's lunch spot: 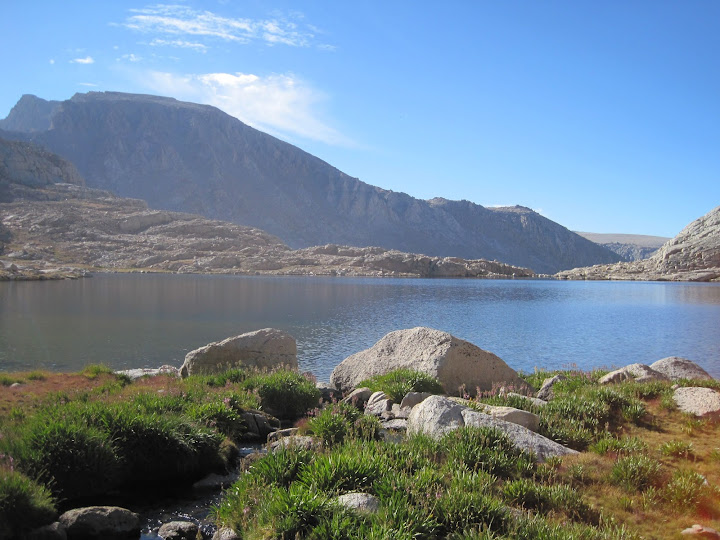 After an easy push over the pass (some Boyscouts had left a base camp @ the top while hitting Whitney from Discovery), I looked down towards Yeager basin - my mid-day destination: 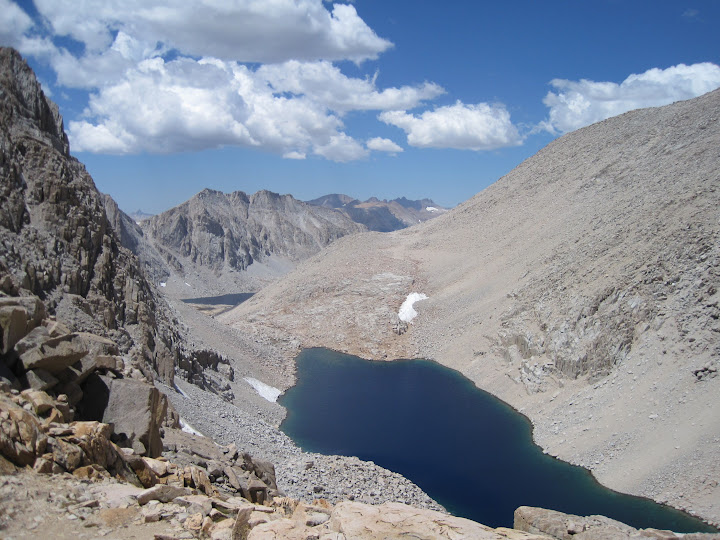 What can I say, I love this place - maybe because I'm a 'beach guy': 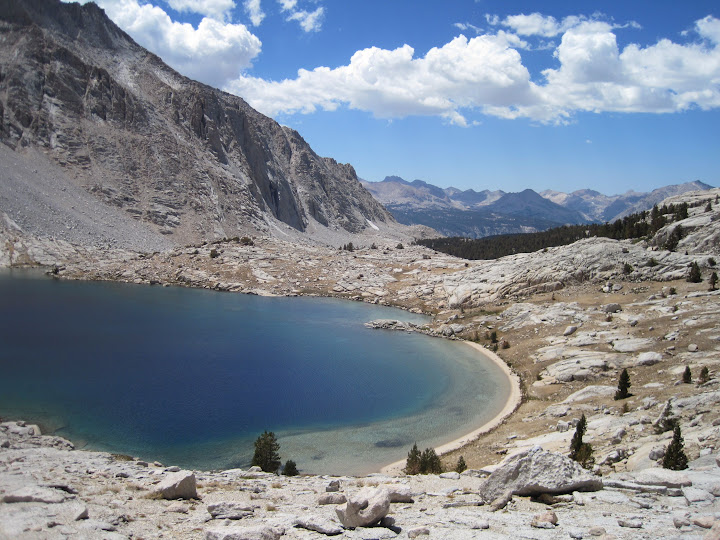 I didn't have much time, so I didn't catch anything. Rather, I was thinking about getting to base camp before too late. That meant I had to go all the way down to the meadow, past the ranger station, and then back up to the staging arena join all the others with the same thing in mind. Trail crest @ last light: 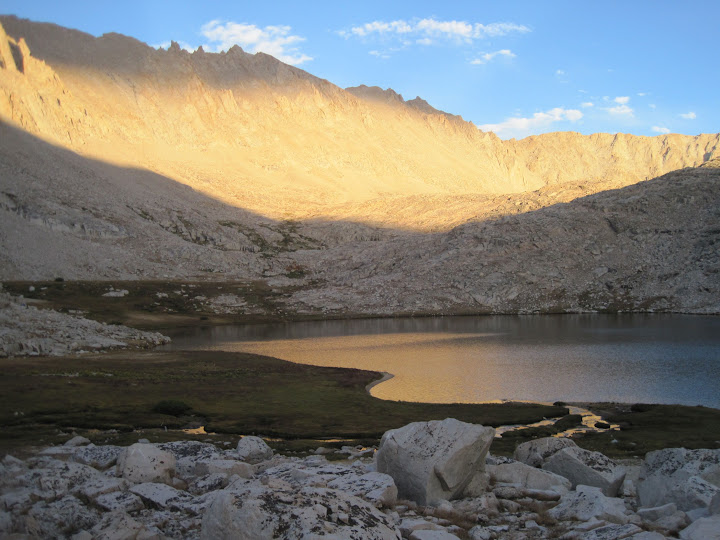 Speaking of others, I ran into David from Uberbivy @ the top of NAP. He was leading a group of Boyscouts up to Whitney the same day as me, except via the PCT, so we agreed to meet @ Gibson/Fender lake to continue our gear talk.

After I arrived and had dinner, he mentioned they were thinking of exiting out of Portal rather than following their original plan of heading back to HM after summiting. The reason, as usual, were blisters and various trail maladies amongst some of the troop. The only hitch was all of their cars were back @ Horseshoe. I offered to take someone back to retrieve at least one vehicle if they wanted to hike out with me.

Now, for some reason I've developed a modest rep as a fast walker, so they picked their fastest & strongest scout while the rest of the troop followed. His brother wanted to join us, so I had a pair of 17 & 15 year olds with heavy packs who were determined to show me what fast was. After around 30 minutes , I cried 'uncle', much to the relief of the younger brother, and I imagine great pleasure of the oldest. (He was leading the train, with me as caboose, and setting the pace.)

After that, we maintained a normal fast pace straight up the mountain, and our code to catch our breath was the aforementioned uncle. We had left at 7:30, and by 10:30, we were atop the highest spot in the continental US. Here's a companion image looking back at the day-1 shot upthread: 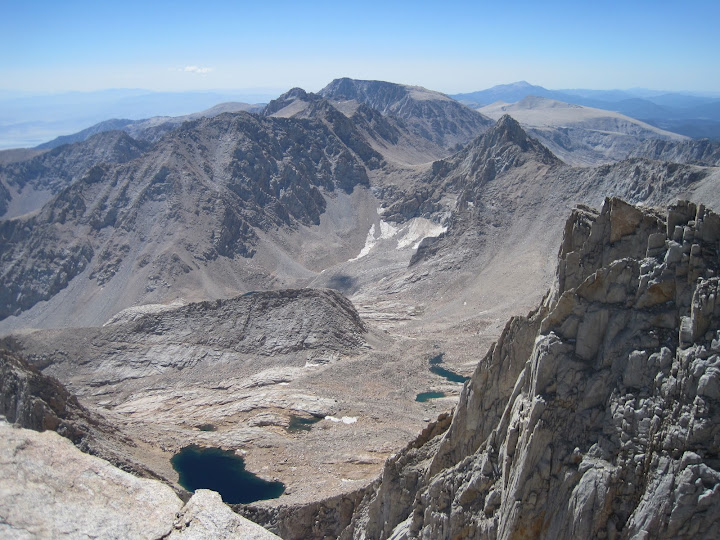 A couple of fit, fast dayhikers were lounging about when I mentioned to the boys that we had made it in 3 hours. One of the guys looked at me and asked where we had come from. He was relieved, as it had taken him 5:45 from Portal. I knew that was our target for the descent, so after hanging out for almost an hour in perfect conditions, we headed down & out.

Well, those kids flew - perhaps it was the lure of me offering to buy them the biggest burger Doug makes. We made it in 5 hours flat, and to memorialize the occasion, I wrote down the pertinent facts on our receipt as a momento: 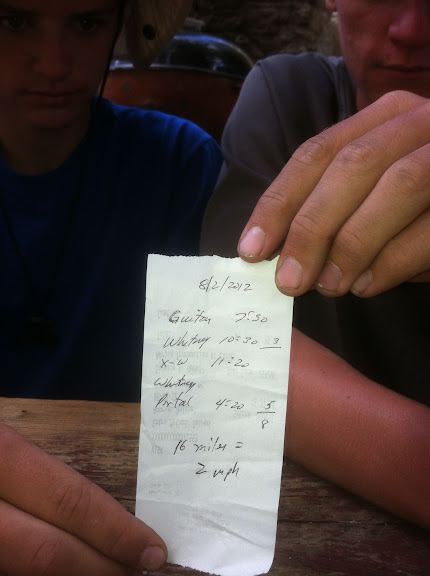 After finishing our burgers, we headed out to retrieve one of their cars from HM. We returned to Portal by 7:30, just when the last straglers were arriving. The two brothers declared it one of their best adventures ever - looking back up canyon @ dusk, they couldn't believe what they had just pulled off. Epic adventure, indeed.
Top

Thanks Hobbes for taking the time to post this great TR and pictures!
Professional Sierra Landscape Photographer

Great trip report. I was just in the same basin but unfortunately did not make it over the CT pass as you did. The upper lake is BEAUTIFUL and i hope to get back up there next year. Thanks for posting!
Top

Thanx - you might enjoy this photo from the Whitney TH. It was taken by the 17 yo on his phone camera after weigh out, and just got forwarded to me by the group leader. Don't know if you can tell how thrashed my shoes are - they were practically new at the start of the trip. 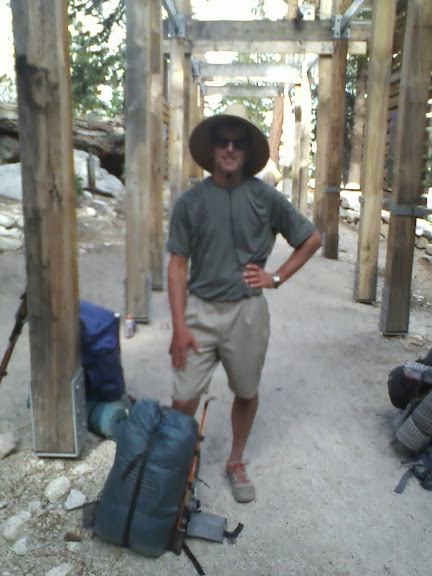 You should have seen their jaws drop! LOL. But hey, I snagged two peaks, and have many years on them. Anyway, that's my story and I'm sticking with it.

PS This pack generated some interest wherever I went. Here's some pics I've posted before @ HST showing the design essentials: 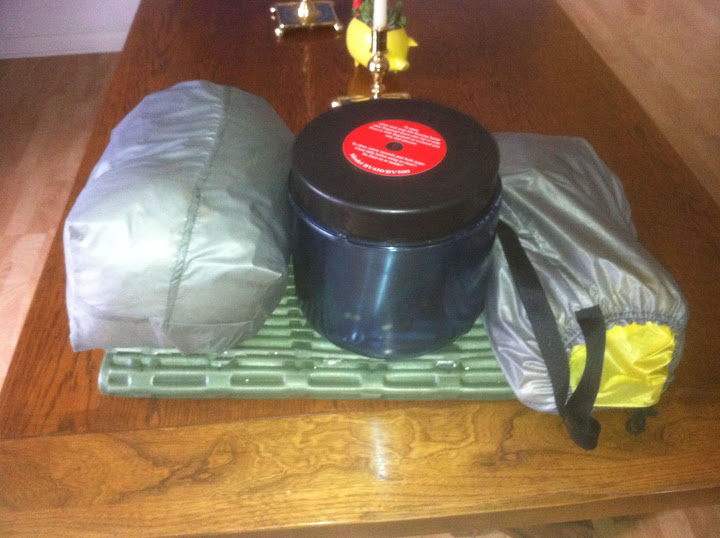 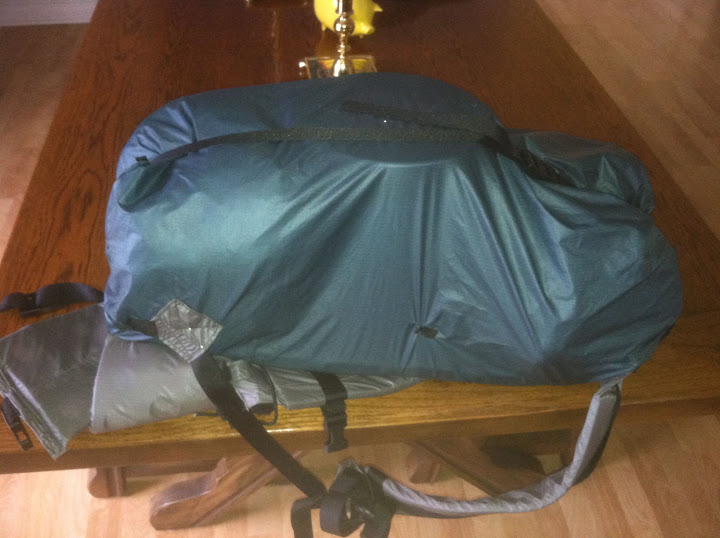 and here's one on top of Langley: 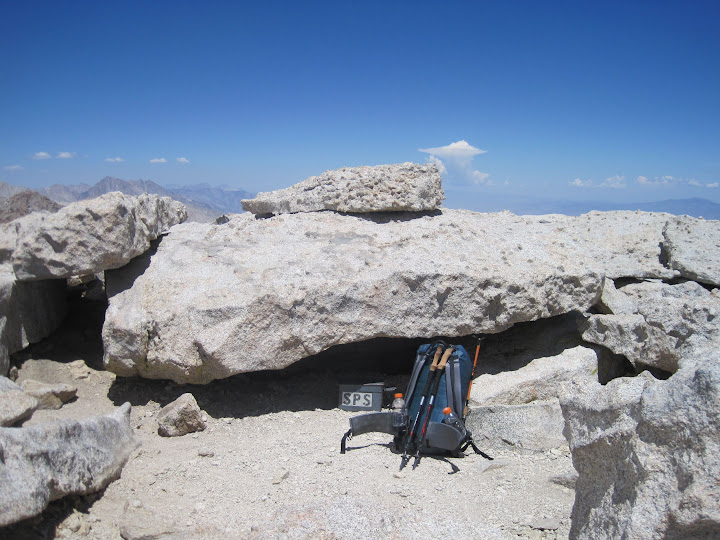 The thing rocks - I've used it on a few previous trips and had re-enforced some stress points, so it's actually surprisingly strong.
Top

Nice job! Love the "Boy Scout challenge." If I were more of a masochist, I might try pitting myself and my 55 lb. pack against a couple of lean, hungry teenagers with 30-35 lb. packs to see if I have a higher gear heretofore unseen which is capable of keeping up with the kids/super ULers.
Top

haha i love the pack!
Top

As usual, I went up NAP. I was persuaded to avoid Army by a member of the SAR recovery team, who mentioned three guys almost went down amongst the boulders the day they found the body. I guess the monsoon rains have really done a number on the old trail.

I don't know if everyone has already seen this photo portfolio of the SAR team's recovery operation, but here it is in case anyone missed it. Initially, they thought Heng was somewhere in the vicinity of Langley, which is why the original search was focused on that area.

However, once the body was spotted below Army pass from lake #4, the orientation switched to rappelling down to secure a helicopter lift out. It should be noted that Heng didn't slip/fall from the 'snow' cornice, but actually a little further down the pass. Also, while the pass seems to be gaining a notorious reputation, Heng was trying to descend during severe 'wet out' conditions.

Since Horseshoe is such a popular TH, these photos also provide an excellent reference point.
Top

Great photos!
"Yeager" basin is the one with the Crabtree Lakes in it? I never knew it had that name. I was just there this weekend, traversing around to the Hitchcock Lakes.
Top

Is that because Chuck Yeager and his buddies used to buzz the area with their fighter jets?