TL;DR Rewind to August 2014. I took my first trip to the Golden Trout Wilderness and it was like being baked in a dusty, waterless oven. I swore that I would never go back. Fast forward to 2019. I’m sick of slogging through snow on the trails out of Bishop and just want to walk on some actual dirt, so I start looking south….

Day 1 (June 27) – I took off from Cottonwood Meadows around 3 pm. The hike up to Trail Pass was short and easy. After that, it was down, down, down through brilliantly green meadows to the South Fork of the Kern (super easy crossing). There was water everywhere, but the trail was generally dry. This is an amazing time to visit the Golden Trout Wilderness. The meadows were beautiful, with tons of wildflowers. I camped that night near Tunnel Meadows. The bugs were bad. They didn’t bother you as long as you were moving, but the second you dared to stop and take a break, they descended. 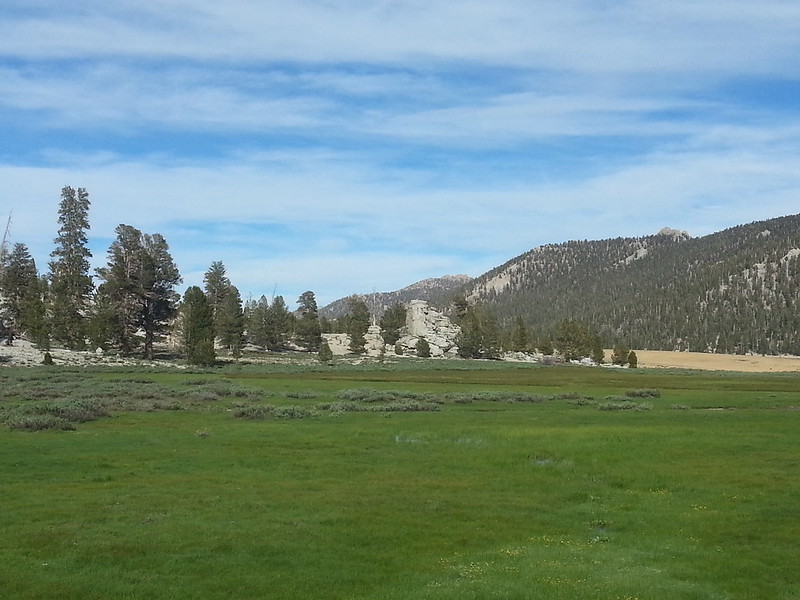 Day 2 (June 28) – I started by hiking up Golden Trout Creek. A few miles up the canyon, you cross Golden Trout Creek. This crossing was nontrivial. It was past my knees and quite swift. I never felt out of control, but I had to be very careful with my foot placements. I crossed at 8 am, and based on what I found, I would hesitate to cross this creek later in the day.

My plan was to turn left (west) a few miles up the canyon to head toward Rocky Basin Lakes. I never found that trail junction. Perhaps I didn’t walk far enough north, but I never saw any sign of a junction even though my GPS was telling me that I had passed the junction long ago. However, the cross country hiking in this area is open and easy, so I just turned left and started hiking up the side of the canyon. Eventually I found the trail at the first meadow surrounding Barigan Stringer. The trail was faint, which leads me to believe that—like many trails in the Golden Trout Wilderness—the section of this trail closest to Golden Trout Creek has disappeared back into nature. I continued with this combination of “trail when I could find it, otherwise easy cross country” to Rocky Basin Lakes.

Rocky Basin Lakes were completely melted but there was still a substantial amount of snow surrounding them. I took a break here for lunch and spent some time assessing my plan to hike cross country over the ridge behind the lakes and drop down to the Siberian Plateau. The left side of the ridge held a large and intimidating cornice, but thankfully, the right side was cornice free. 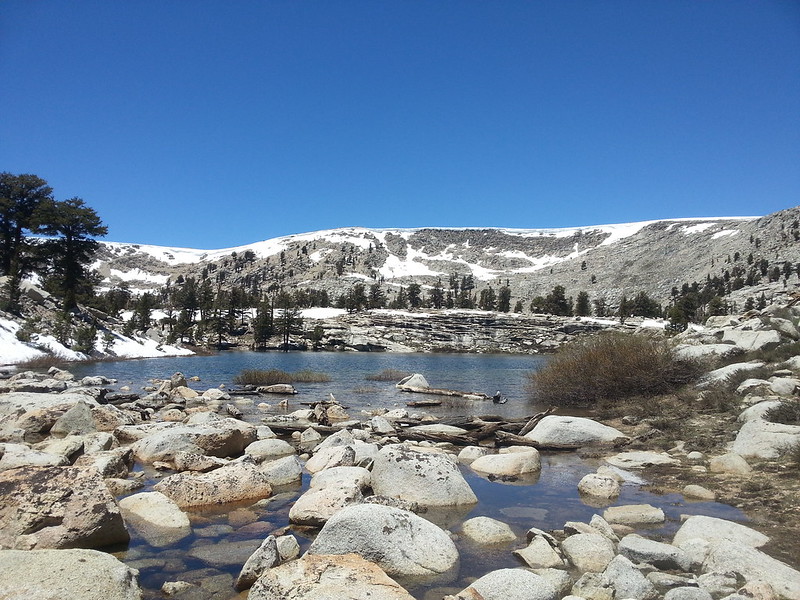 Rocky Basin Lakes. You can see the cornice straight ahead. The spot where I crossed is to the right and out of the frame.

I wove a circuitous path around the lakes and started my way up the ridge. This was perhaps the best part of the trip. The hike up the ridge was a perfect class 2 scramble. Every time you hit something that looked too vertical, another ramp opened up to lead you around it. I took the long way up and around this ridge, contouring around a peaklet that was to the right of the obvious low point in the ridge and then contouring back left to bring me back to where I would have been had I crossed at the low point. I did this because the low point was still holding a cornice. My route avoided any cornices and kept the hiking to easy class 2. In a few weeks when that cornice is gone, you can save a lot of time by heading straight up to the obvious low point on the ridge. 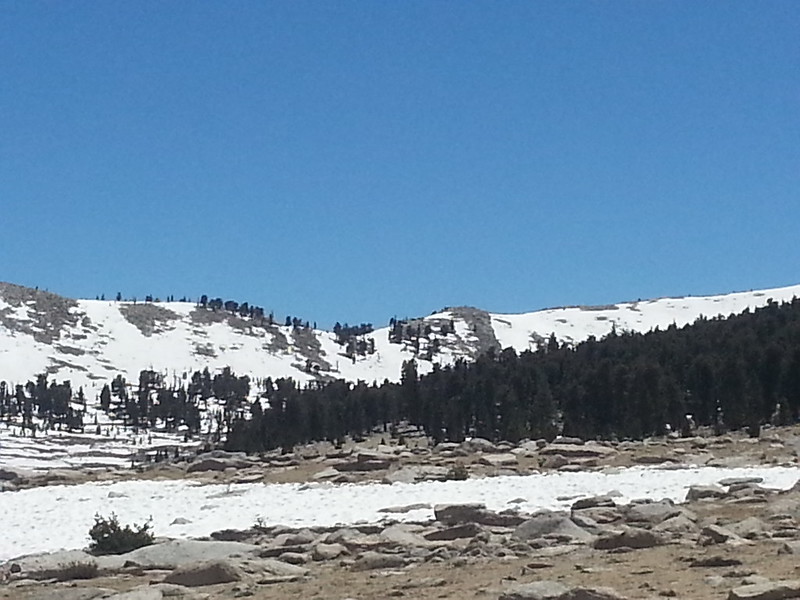 Looking back up Siberian Creek to the ridge separating it from Rocky Basin Lakes. The low point with trees would be the best crossings when there's not a cornice. I crossed to the left of the low point. 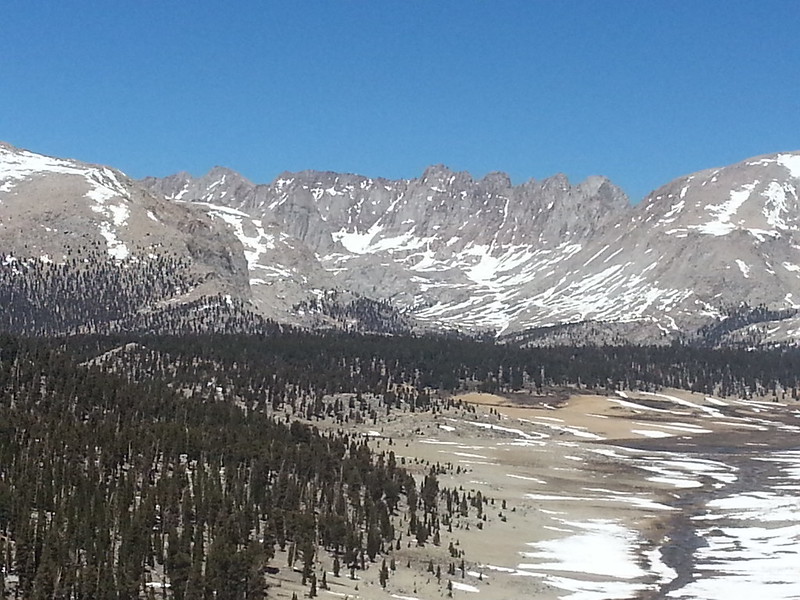 The other side of the ridge revealed amazing views of the Sierra Crest and the Siberian Plateau.

The hike down to Siberian Creek was not enjoyable. It consisted of microwave sized talus covered by a rotten layer of snow. The snow was too thin to support my weight but too thick to see the rocks below it…a perfect recipe for a broken ankle. I picked my way very carefully down to Siberian Creek.

I crossed over to the northwest side of Siberian Creek because that side looked to have less snow. In hindsight, this was a mistake. Although the west side had less snow, the Siberian Plateau slants slightly downhill to the west, so as I got lower, the saturated ground turned to horrible, thick mud. Basically, it turned from postholing in the snow to postholing in the mud, and the worst part was that you couldn’t even tell where the mud was because it was covered with a seemingly dry layer of sandy gravel! Then it got worse. As I hit the low point of the Siberian Plateau, it was so flooded that it turned in to a shallow lake. I started sloshing through this flood, only to quickly find the water was up to my waist! I definitely wasn't expecting the midday bath, but at least it rinsed the mud off. I think that you can avoid this mess by staying on the right (south east) side of the plateau. The water appears to drain in a westernly direction off the plateau, so stay high and to the east and you should be better off than I was.

I continued hiking northeast and eventually intersected the PCT with the plan to head toward Rock Creek and the Miter Basin. Snow became more frequent once I left the PCT to head toward Rock Creek, but it was never anything more than random drifts across the trail. The crossing of the Soldier Lake outlet was no big deal. I had to wade it, but my feet were still soaked from the Siberian Plateau.

Miter Basin was kind of a bust. It’s as beautiful as ever, but it is so, so wet in there. Basically the entire thing was a giant puddle. I struggled to find a dry spot to set up my tent because the lower areas were flooded but the rocks above the meadows were still holding snow. I didn’t go very far up the basin, but the good news is that I encountered very little snow in there. It looked like you would hit significant snow if you tried to climb up to Sky Blue Lake, but honestly, that would have been preferable to the giant puddle I was hiking through. I think that Miter Basin needs a few more weeks before it’s in good shape for backpacking. 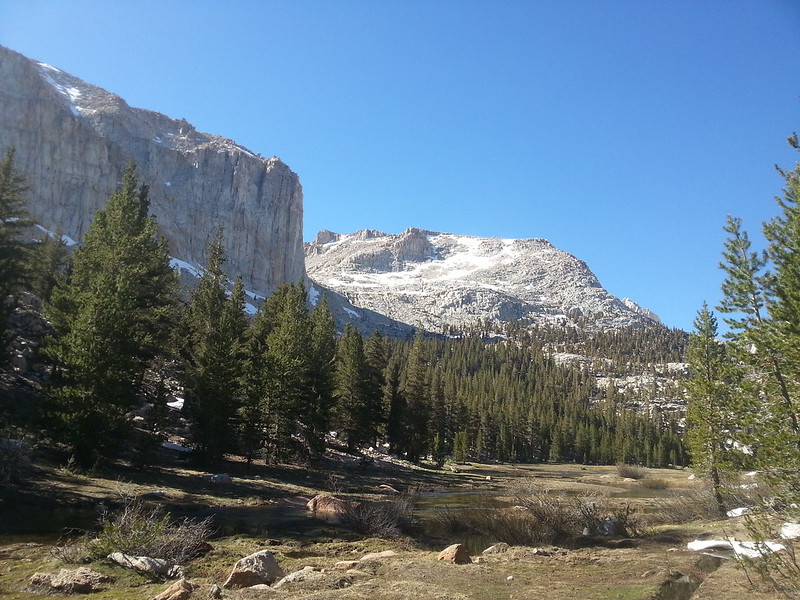 The first meadow in the Miter Basin.

Day 3 (6/29) – I had one thought on my mind when I woke up – “go home and eat food.” I am notorious for massively overpacking food when I go backpacking. I vowed to fix that this year, but I think I swung to the opposite extreme for this trip. I woke up the morning of day 3 and discovered that I had one breakfast and a handful of snacks left in my bear can, and I was ravenous. Despite its flooded state, I would have liked to stay and explore the Miter Basin a bit more, but I knew that I would be extremely grumpy if I didn’t get out in time to eat lunch in Lone Pine. So I packed up and made tracks for the PCT and Cottonwood Pass. This hike out was quick and unremarkable. There are still some snowdrifts on the PCT, but there are so many tracks that navigation is a nonissue. Cottonwood Pass is clear except for one tiny section of snow that poses no danger. Chickenspring Lake is about 50% melted out. I encountered tons of people heading up Cottonwood Pass, all bound for Chickenspring Lake. I've never understood the allure of this lake. I visited once and found it to be overcrowded and sadly full of trash.

Overall, this was a great trip. I’m so glad that I got to see the Golden Trout Wilderness when it’s not painfully hot and dry. It was such a refreshing change to hike on trails, rather than snow. I got to stretch my legs, put in some big miles, and pretend (at times) that it was summer! I’d highly recommend the Golden Trout Wilderness for Fourth of July trips this summer.

Great report! Thanks for posting this.
Balzaccom

Awesome post. Great to see the conditions in the Southern Sierra.
Top

Thanks, GGC - nice report and photos about a beautiful area.

The trail does reach Golden Trout Creek - looking at your map, I think you may have cut off trail a little early. In August 2017, some friends and I did the same route as the beginning of your trip in reverse -- Basin Lakes, Barigan Stringer, Golden Trout Creek, Tunnel Meadow, Bullfrog Meadow and Trail Pass. So we had the advantage of being able to follow the trail down to the junction by the creek.

But it wouldn't surprise me if the junction was hard to see in the direction you were traveling, since as you mention that trail is pretty faint. On the map there's a connector trail between Tunnel Meadow and the Golden Trout Creek trail that we had wanted to take, but we weren't able to find either end of that trail.

Great report! I really loved your Caltopo annotations to go along with your pictures and report. Nice idea.
Top

Thank you for a genuine trail report! It is nice to see that it is possible to get into some high country. The ranger told you the creek at the Soldier Lake outlet was bad? That seems bizarre--hard to imagine that creek ever being very large.
Top

Do I get these permits from the Whitney Ranger Station?

Edit: Never mind, I sorted it out. Great trip report!! I think I'll be doing this on Wednesday.
Top

blaybelay - you can get a permit from the ranger station in either Bishop or Lone Pine. But Trail Pass is non-quota, so the permit is just a formality / chance for the rangers to remind you about the rules.

kpeter - I also thought that was odd advice about the Soldier Lake outlet, but I had never been to that area outside of dry years, so I had nothing to go off. Ironically, when I crossed it for the second time early Saturday morning, that was the one crossing of the trip where I was easily able to keep my feet dry. Friday afternoon required wading, but nothing that I would describe as even remotely dangerous or challenging.
Top

I was searching for info about Trail Pass and this report came up. This looks like a great early season trip.
Also wanted to say thanks for the nice photos and report and Caltopo map
My trip reports: backpackandbeer.blogspot.com
Top
Post Reply
9 posts • Page 1 of 1