If you've been searching for the best source of information and stimulating discussion related to Spring/Summer/Fall backpacking, hiking and camping in the Sierra Nevada...look no further!
Post Reply
19 posts

BlueWater and I headed up to Whitney this weekend to hike the main trail. The conditions were really excellent, especially as the recent storm had just passed through. Even though it's been a low snow year, of course that doesn't mean it's a *no* snow year. Even better, most of the snow fell in March, so there's still good coverage above 11k.

For the photographers, I'm sure this picture has everything possible wrong about it. Yet, I like because I feel it creates a sort of vertigo effect that is a true representation of what the 'winter' route (up the Consultation drainage) looks like when hiking: 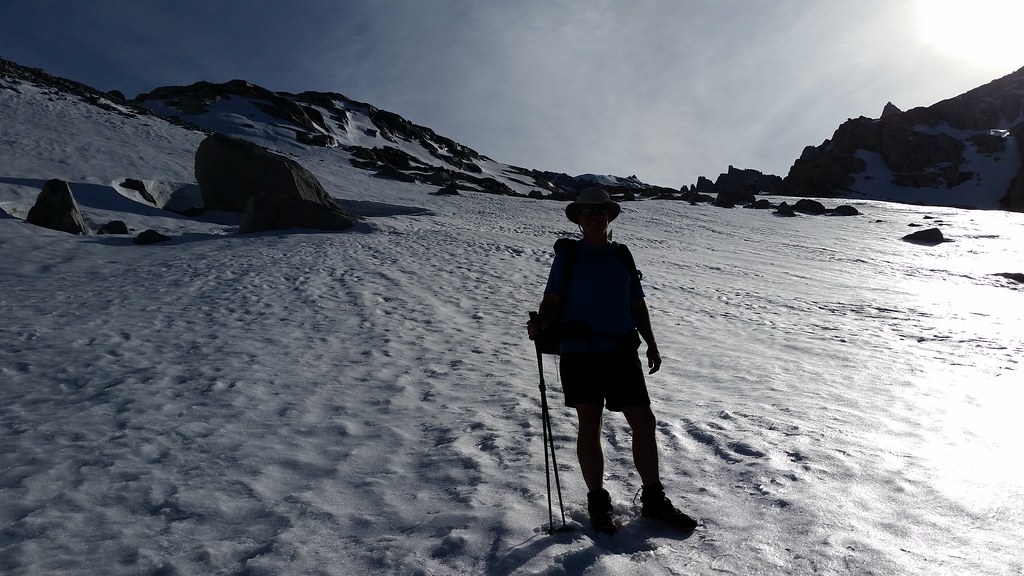 Because we had driven up from SoCal Friday morning, our destination was Trail camp for the night. This is what the Chute looked like from our base camp. (The 99 switchbacks are directly to the left - the Chute is used when it has snow to bypass the iced out cables section.) If you look really closely, you can see a few tiny dots which are hikers beginning the ascent: 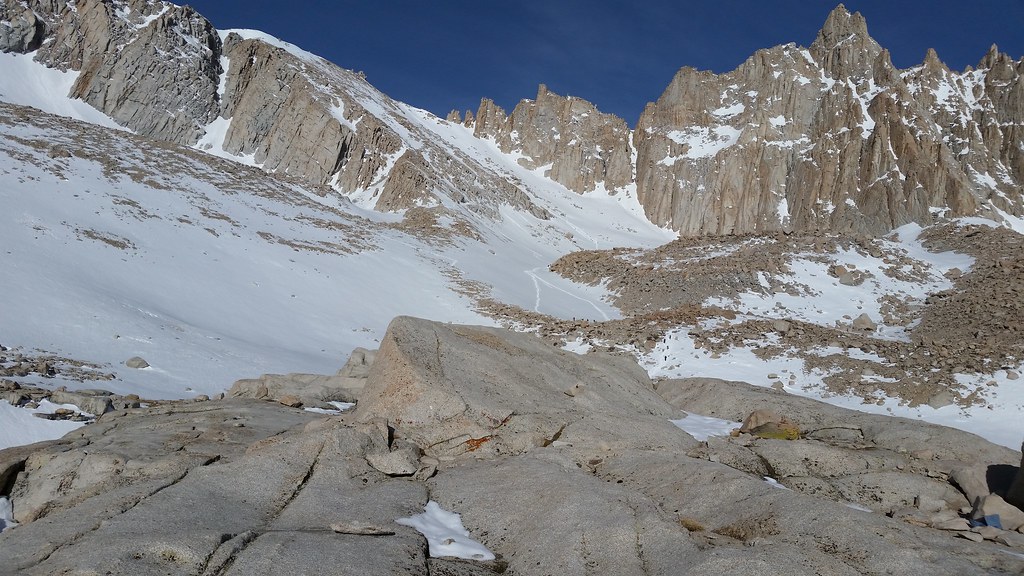 Having done Whitney many times in every possible condition/variation/approach (except the 5.x east buttress), we planned for a very civilized ascent the following morning around 8am. Yes, I know it sounds like blasphemy, but the logic was as follows: (a) We were staying Saturday night as well (with a Sunday drive home), so with 7 hrs budgeted for the 8 mile round strip, we still got back to camp by 3pm; (b) We ran into 4 day hikers while on the way up to TC who made the peak around noon. That means they hit the Chute between 8-9. Andy was fully down on this plan, and I was cool too because I thought the snow could use a little softening.

We reached the summit in the expected 4 hours - noon (for those doing the math, yes, that's around 1 mph) - were we took the requisite photos and admired the surroundings. Of note to those thinking of heading out for a spring hike, you can see the snow line across the Kern in the Kaweahs is around 11k: 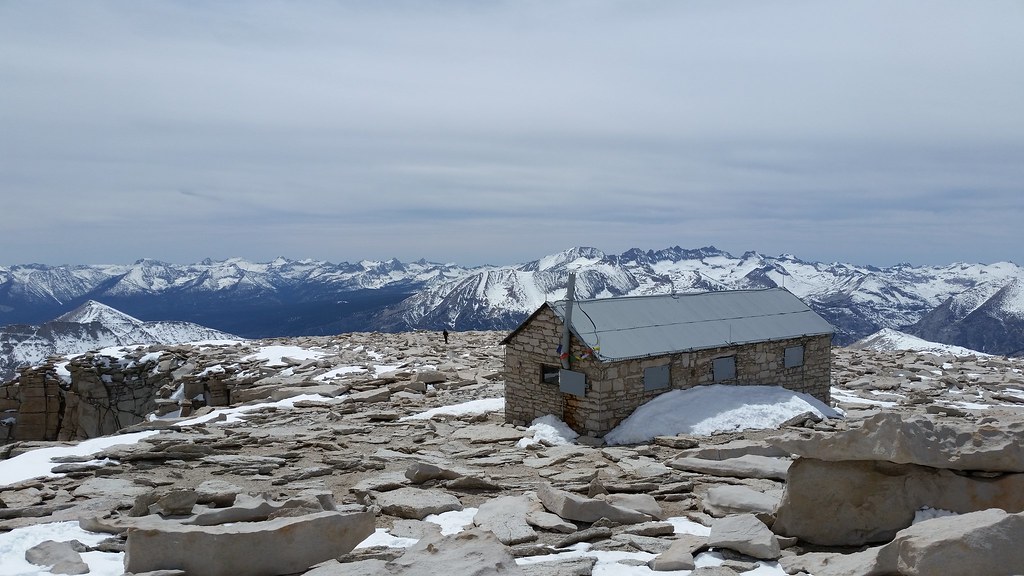 Because Honey B[adger] 'does what he wants', but is also an excellent photographer, here's the standard peak shot. He'll probably see this thread and post some other, much better composed photos than what I posted: 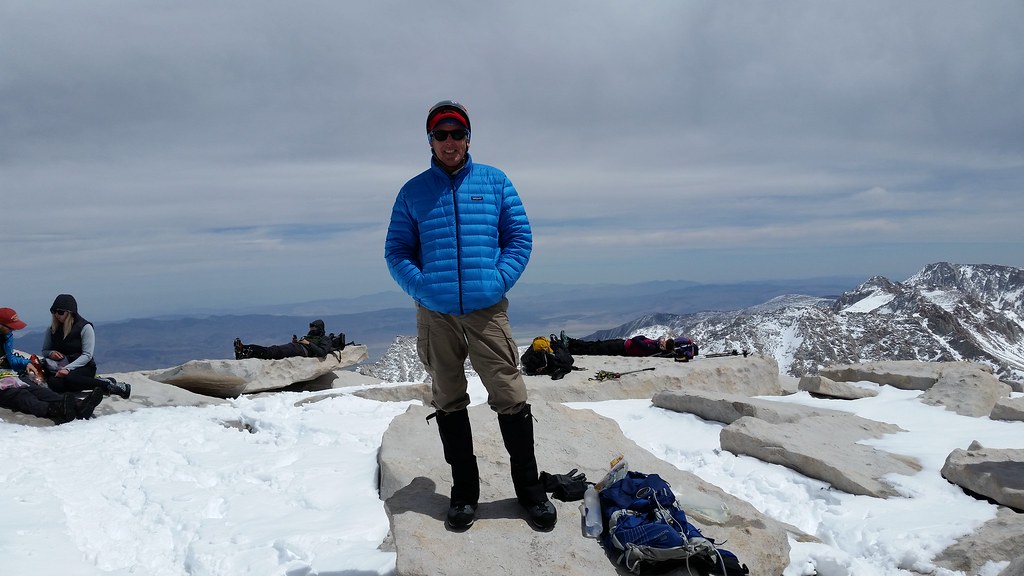 PS Those are all day hikers in the background - they all started before 3am. There were probably 25 on the trail that day; it seemed everyone was a 20 something. No 'weirdos' either; everyone had proper boots, crampons, ice axe, provisions, water, etc.

For those interested in getting out during spring, it's really nice. Just watch the weather and go if you can.

Awesome! You guys got that "Sierra Itch" way more than I apparently. Great Job

Without a People's army, the people have nothing.
Top

Congrats Hobbes, and thanks for posting. I'm glad you made the summit. How were trail conditions on the west side, from Trail Crest past Mount Muir and the needles?
Top

Flamingo, snowy & icy. Right now - assuming conditions don't drastically change in the next 1-2 weeks - you need to wear traction from Trail camp to the summit. The sketchiest areas - besides just getting up the Chute - are from Trail crest, down to the JMT junction, and then the entire run of the JMT until past the last keyhole. There's some exposure, but the snow has been tramped down to a flat path in most places. Just make sure your axe is planted and walk along: 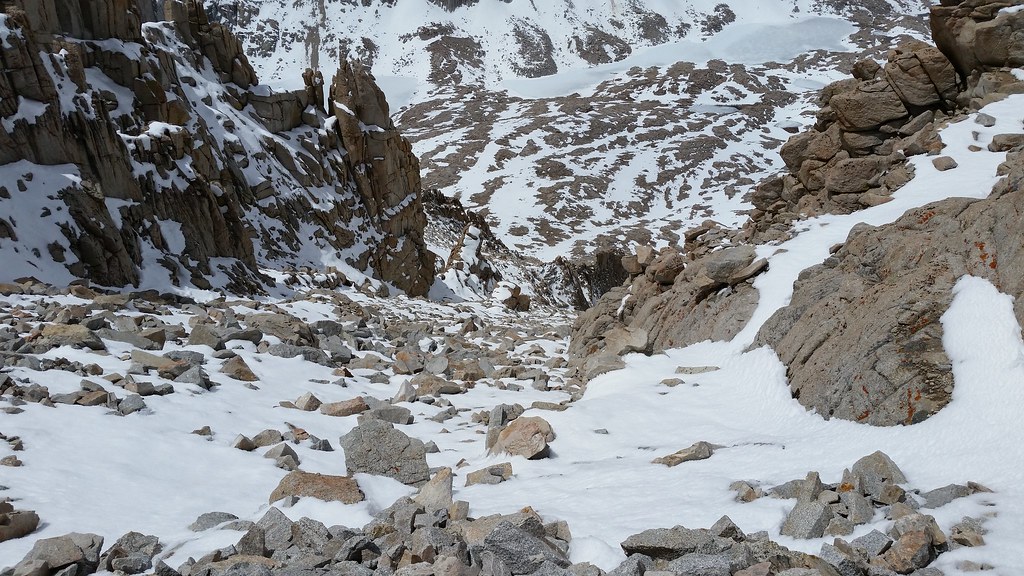 Looks scarier than it really is 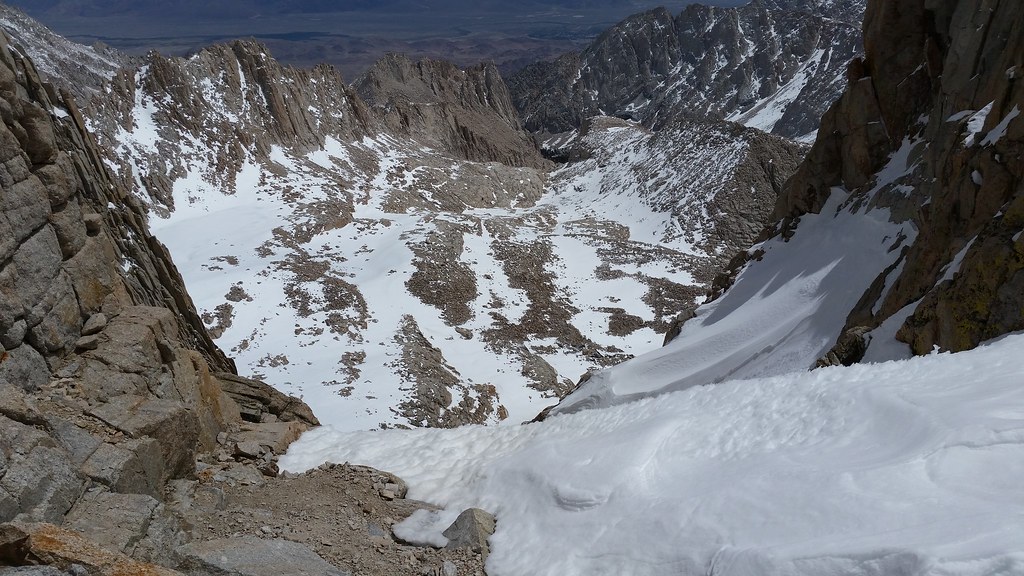 Last keyhole looking down at Iceberg

Did you make it in October with your friends? I know you like those snow ascents; thinking of going? It's such a fun hike - sort of like standard Mt Tam or Mt Diablo - but with a little alpine, high Sierra twist.

Hobbes wrote: it seemed everyone was a 20 something. No 'weirdos' either; everyone had proper boots, crampons, ice axe, provisions, water, etc.

Something strange must be going on, I can sense it.

You know what's even trippier? I asked one of the kids if they were getting any cell phone reception - assuming of course they all had their phones on. He laughed and said "No, what, a millennial that isn't glued to SM?" in a self-deprecating manner. He was up with his gf - they were primarily rock climbers. We ended hiking back with them to the Crest. They both confessed the hike was a little more 'mountaineering' than they expected.

I reviewed the basic glissade/self-arrest method with them and took off over the ledge. It was starting to get iced up, so I was having trouble controlling my speed without going into self arrest. (I mean, we're talking all my strength applied to the tiller of a 70cm BD Raven with my boot heels trying to dig in without effect.) Did that flip between glissade and arrest maybe 10 times until near the bottom where I just plunge stepped the rest of the way. Even then, it was getting slick enough where I got to inadvertently stand-up glissade.

Peter, I'm such a terrible shot, but here are two other poorly composed pics: 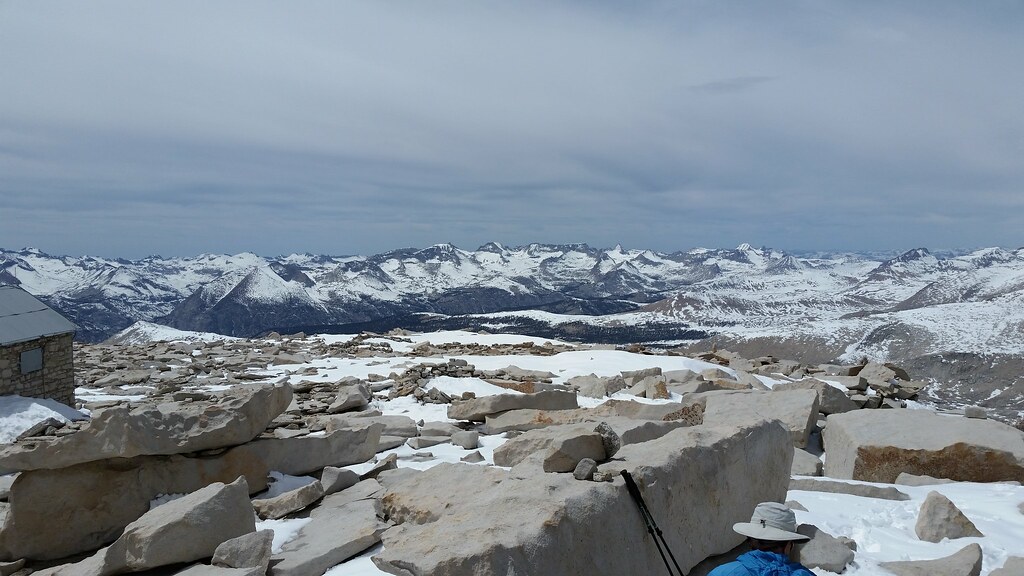 That's Andy rummaging in his pack. 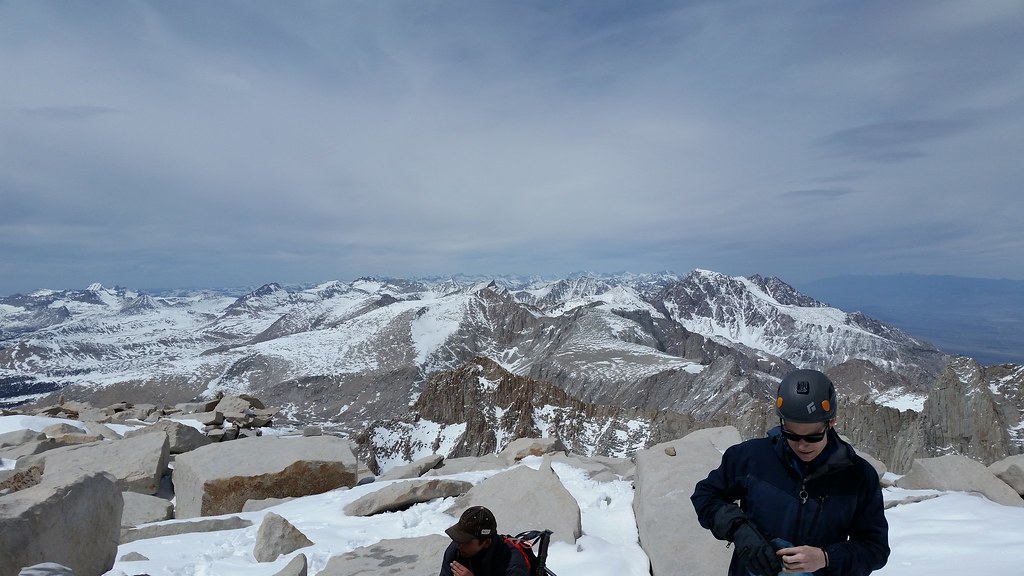 The dude with the helmet had just come up the MR with his buddy. He's not in the picture - that's another 20 something that came up the MMWT.
Top

OK, BlueWater is starting to go through his photos. Here's one he took of the Chute from Trail crest. Yours truly is the 3rd one down. Why is he already on the Crest? Because he kicks my ass on ascents (I get my revenge on downhills with a longer stride): 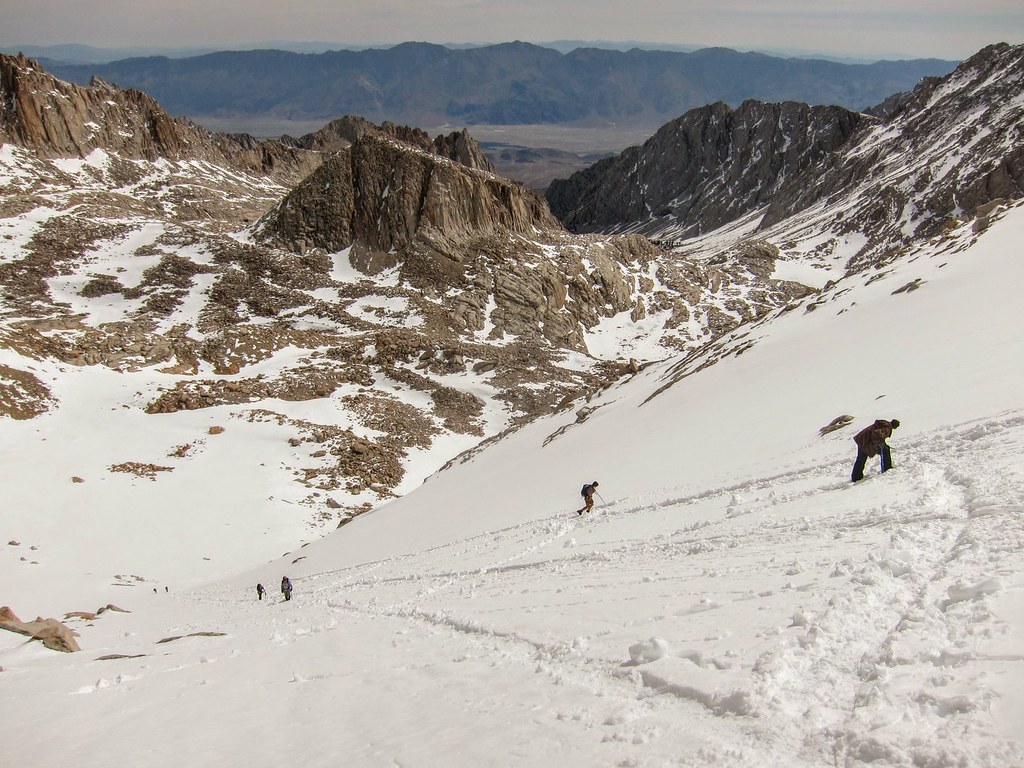