If you've been searching for the best source of information and stimulating discussion related to Spring/Summer/Fall backpacking, hiking and camping in the Sierra Nevada...look no further!
Post Reply
6 posts • Page 1 of 1

Three men and a dog spent the Fourth of July Weekend backpacking into Humphreys Basin to check out the melting remains of the record snowpack.

My son, his friend, and his pup joined me Saturday morning in Lone Pine, and then we headed up to Bishop and Highway 168. We drove up the dirt road to North Lake, but had to park in the day use parking below the lake since the road to the campground was closed due to flood damage. 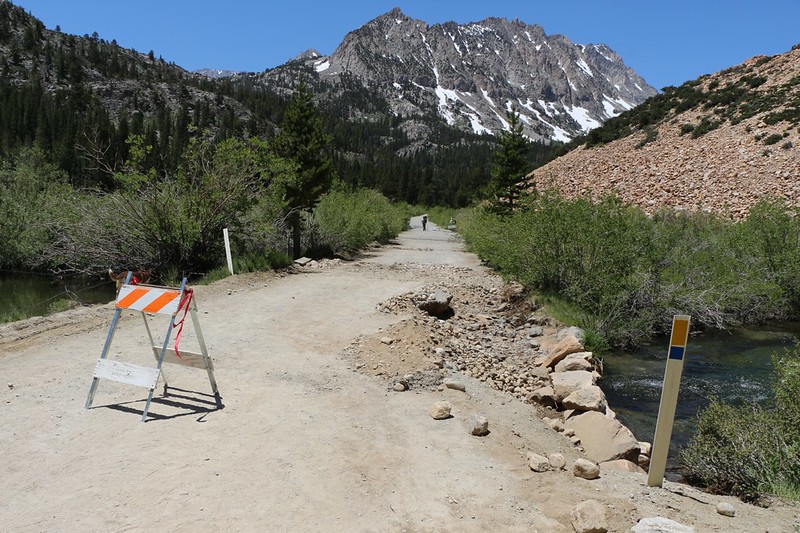 The site of the road damage just west of North Lake

We put the finishing touches on our backpacks and hiked the extra mile along the road to the beginning of the Paiute Pass Trail. After that we began to climb in earnest and we built up quite a sweat. It felt good to hike hard uphill. And we had no choice but to keep hiking because there were plenty of mosquitoes in the lower forested sections of the trail. We each had small clouds of them following us. There was also a lot of water flowing in the creek. 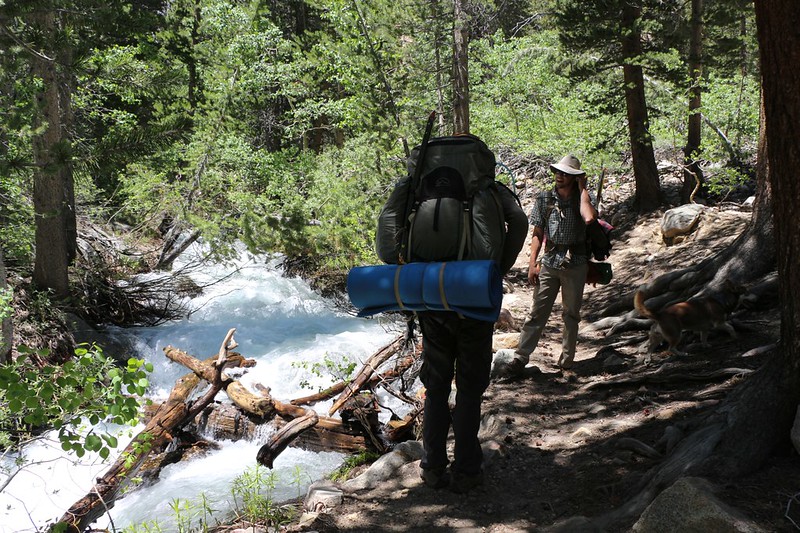 The North Fork of Bishop Creek was running strong

Eventually the trail broke free of the woods and began switchbacking up the north side of the canyon. It got hot in the sun but the breeze was good, and the views were better. 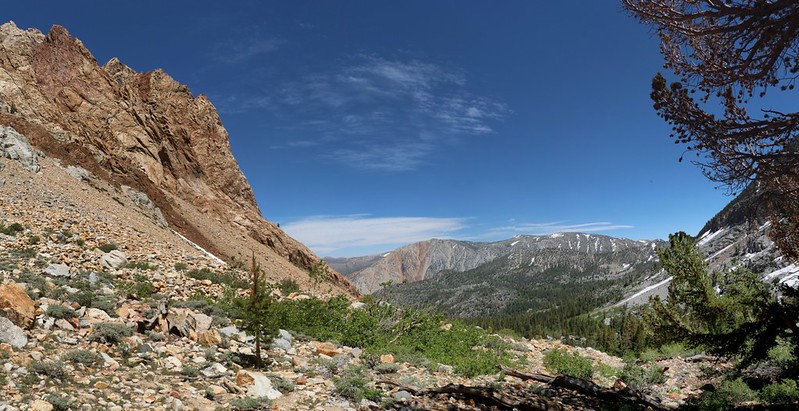 There was a bit of a headwall just below Loch Leven, and this was also when the snow began. We put on microspikes and climbed over the partly melted snow. Once we made it to the lake, we were able to see Paiute Pass in the distance. We also saw a whole lot of snow between here and there. The going would undoubtedly be slow. So on we trudged. Our legs were sad but our eyes were happy. It was beautiful up here! 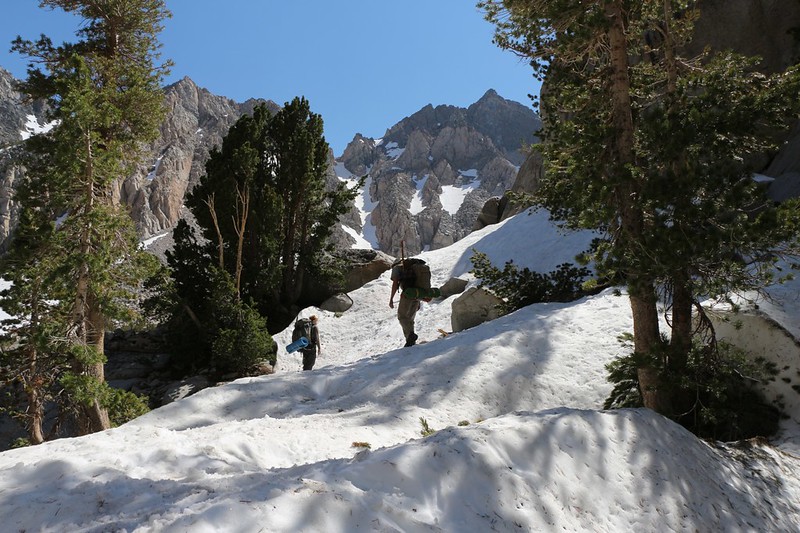 We had no idea if we were on the trail, thanks to the snow, but we continued on anyway 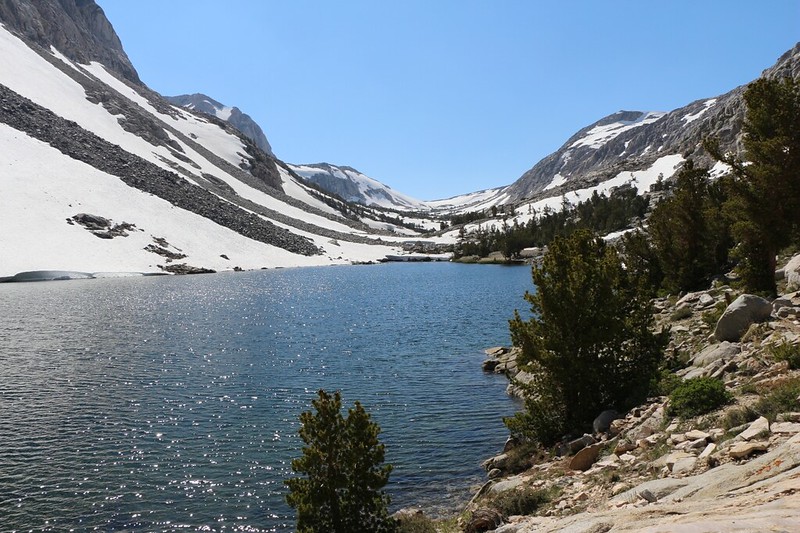 Snow-ringed Loch Leven, with Paiute Pass in the distance 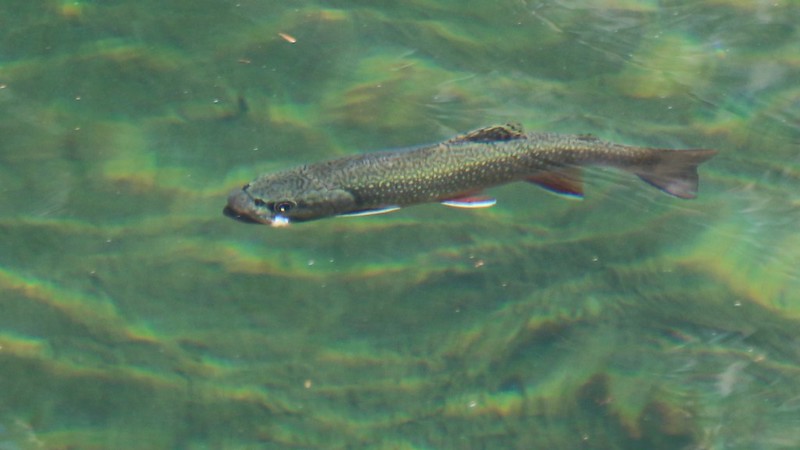 Trout swimming in one of the unnamed ponds below Paiute Lake.

This fish was about ten inches long, cruising along right near the shore. What kind of trout is it? I know that there are some serious fisherman on this forum... 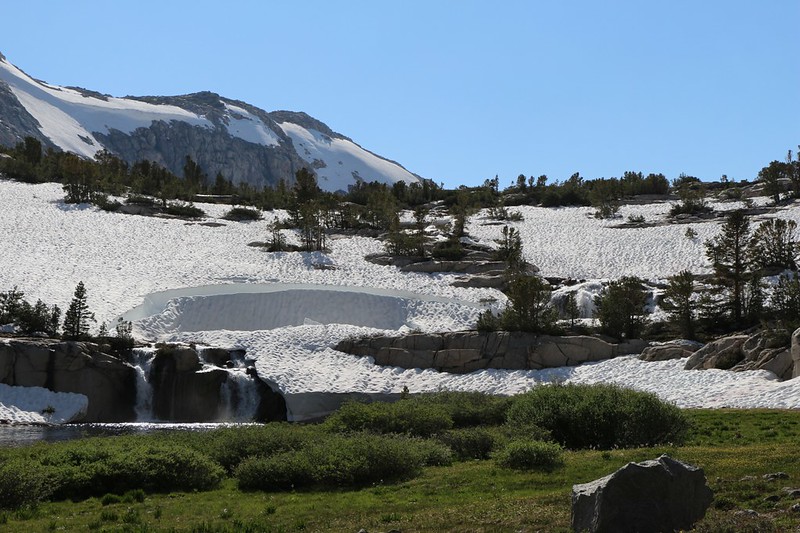 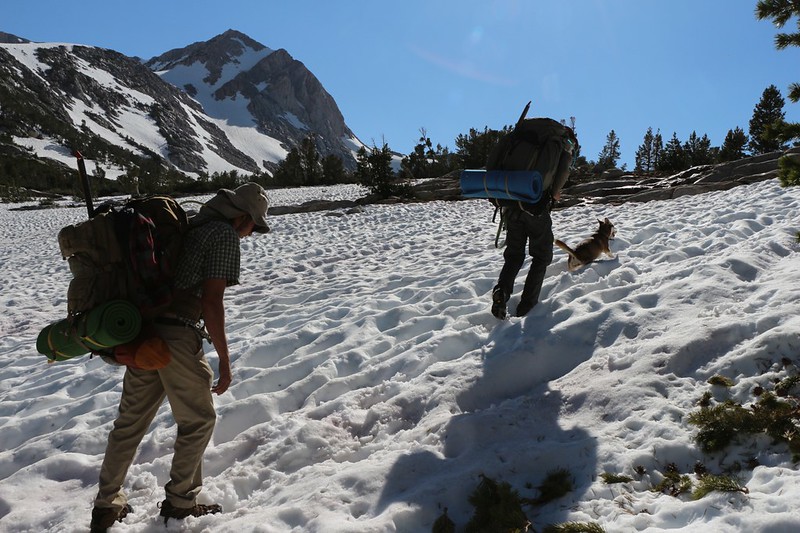 When we reached Paiute Lake we discovered that it was nearly 6PM. We'd hiked less than five miles and it took us about six hours altogether. It was too bad we got started so late. We thought about continuing onward to the pass, but then realized that we were tired. I pointed out that the destination itself didn't really matter. What mattered was that we were here in the Sierra. And this lake sure was pretty. So we set up camp not far from the shore, ate some dinner, and went to bed early. Some of us had been awake since 3AM, driving all the way north from San Diego.


We woke up fairly early the next morning. Or at least the dog and I did. It was cold, and there was a skin of ice on shallow puddles nearby. I boiled up some water for coffee and then the other two came to life. We packed up quickly and headed out, hoping to hit the long, snow-covered traverse below the pass before the snow got slushy again. 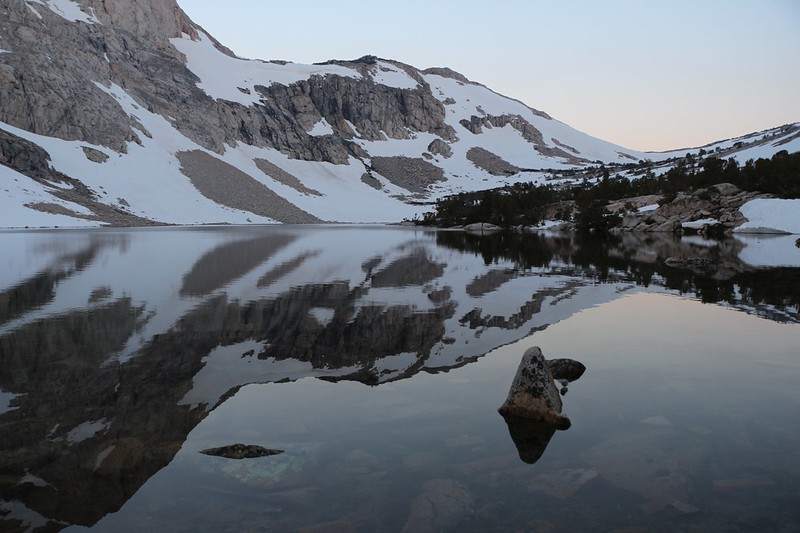 Dawn calm snow reflections from our campsite on Paiute Lake

The final long traverse across the snow to reach Paiute Pass 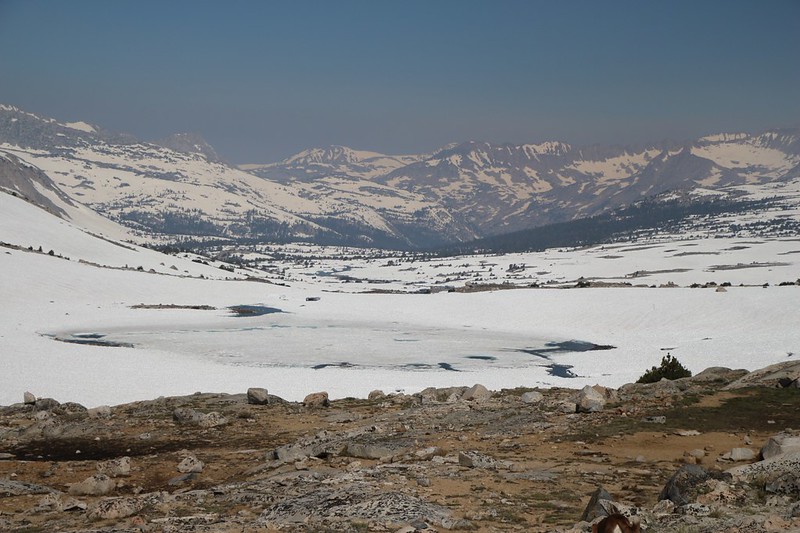 There was snow everywhere in the basin. I was expecting it, thanks to other folks reporting it here on the forum, but the reality was just a bit stronger. There was a LOT of snow out there. And all the lakes were frozen, just like they said. This was going to be an interesting hike.

We brought out the map while taking a short break up on top of the pass. We decided to check out the Humphreys Lakes, and then maybe head down to Desolation Lake afterward. There was a faint use trail at first but soon it vanished under the snow and we were traveling cross-country. Mount Humphreys appeared once we topped the first ridge, and it was obvious that the mountain would be the defining landmark for the rest of the day. It was hard to get lost with that awesome peak looking down on the entire basin.

Blue ice in a small frozen pond, with Checkered Demon left of center

Mount Humphreys and one of the frozen Humphreys Lakes 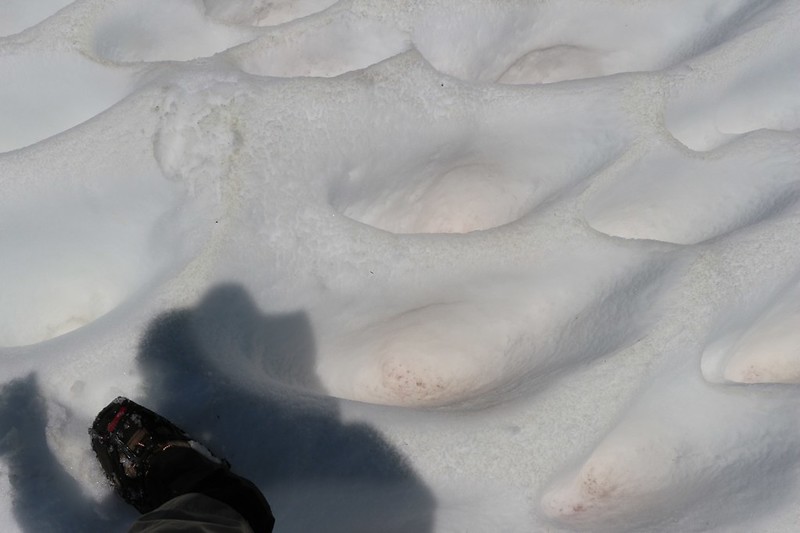 We took another break up near the Humphreys Lakes and checked out the map. Where did we want to camp that night? It didn't really matter, but somebody had to make the decision. Decisionless, we decided to stay up high for now and see what Desolation Lake looked like from above.

An hour or so later we topped out on an exposed granite ridge and checked out the view. 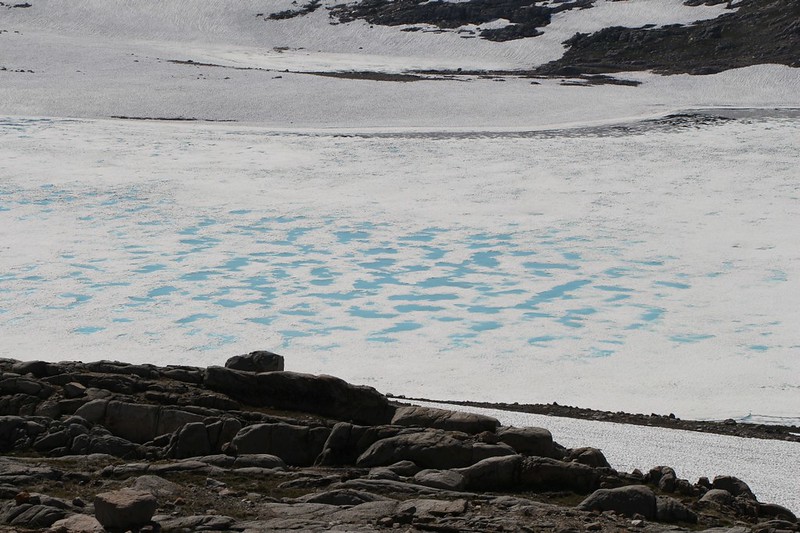 There was an awful lot of snow down there. And we didn't see any point in hiking down to the shore of a lake which had no obvious shore. Meanwhile, it was already late afternoon and this ridge had some amazing views. Decision made. We scouted out a suitable spot to camp and got down to business. 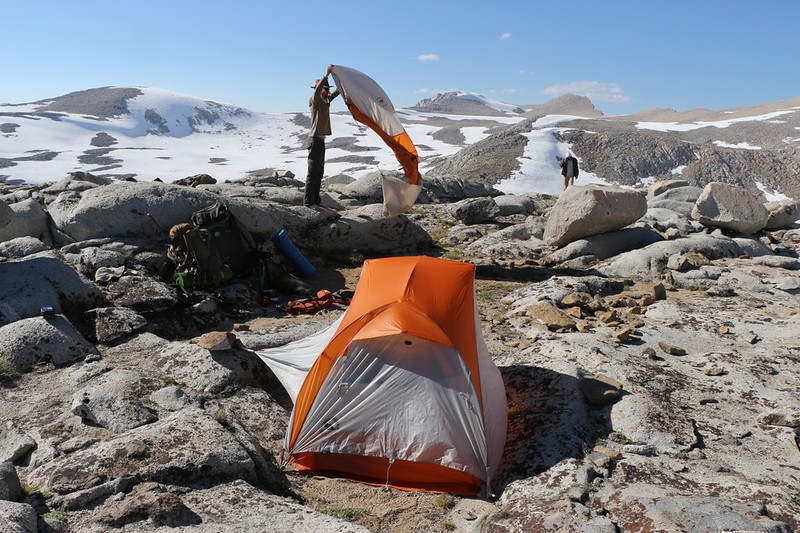 Setting up our tents on the ridge above Desolation Lake

Desolation Lake from our camping spot

Mount Humphreys in the evening light

We ate dinner. The boys ate two dinners. The dog shared some of each.

Then we got into our warm clothes and hung out late into the evening, watching the sun set and the gibbous moon rise high over the basin. It was a fine evening to be camping in the High Sierra.


The next morning we woke up a bit earlier and got packed quickly. Attempting to walk on top of those deep sun cups the day before had been brutal. Slow and slippery and scary all at the same time.

We also had some serious miles to hike, as the boys needed to get home and see their girlfriends. At least I think that must have been the reason. I really wanted to stay another night, possibly heading over toward Muriel Lake and the Goethe Glacier, just for something different to do. But it wasn't going to happen. So we started hiking back to Paiute Pass right away. At least the hike downhill from there would go quickly. 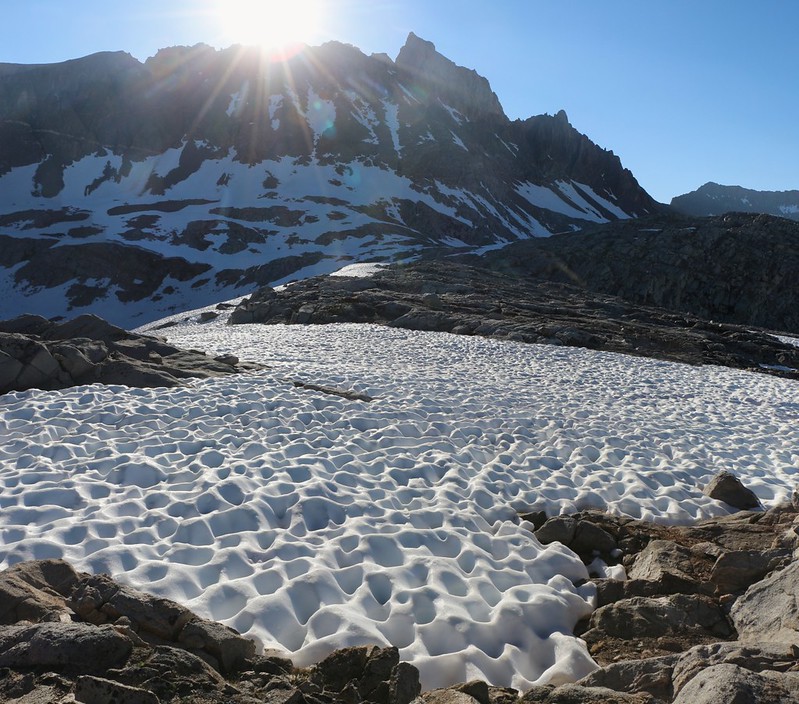 The sun rises above Mount Humphreys, showing the texture of the sun cups in the snow 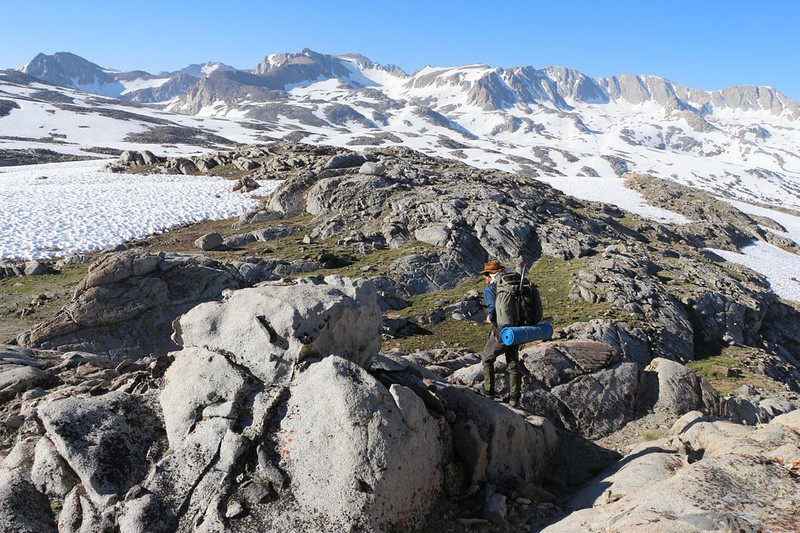 Hiking across the granite ridges, avoiding snow when possible, on our way to Paiute Pass 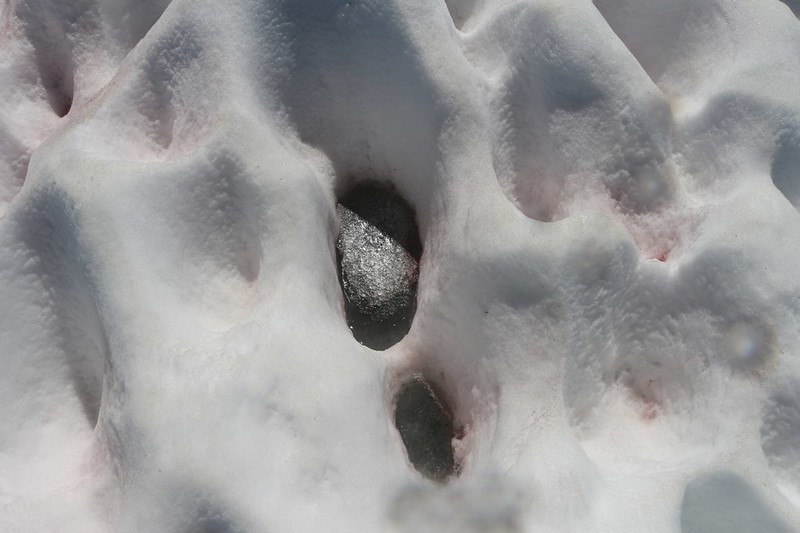 Water with a skin of ice down at the bottom of a three-foot-deep Sun Cup - don't step there!

We arrived at Paiute Pass in decent time, but hit the pass a bit too high on the northern shoulder. The snow was extra-steep heading down into the valley, but that didn't stop the boys, and it certainly didn't stop the dog. That pup was having a great time. 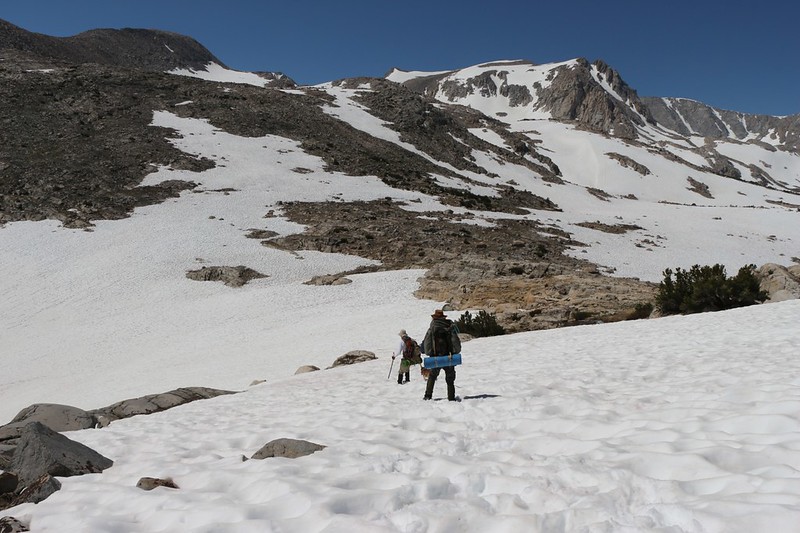 The boys decide to take the direct route down, shoe-skiing all the way 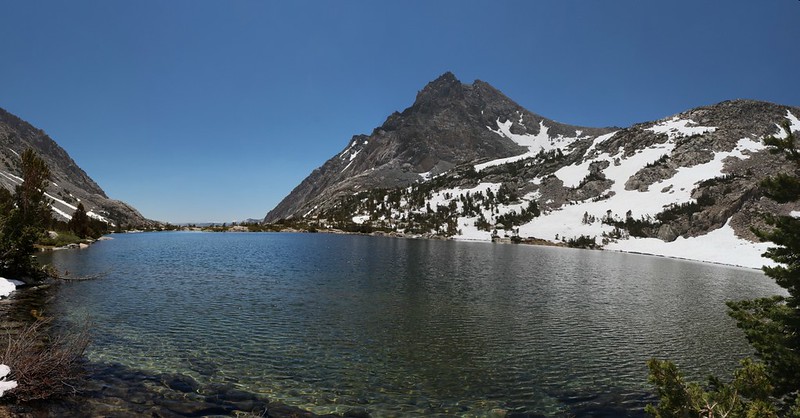 Paiute Lake from the western shore 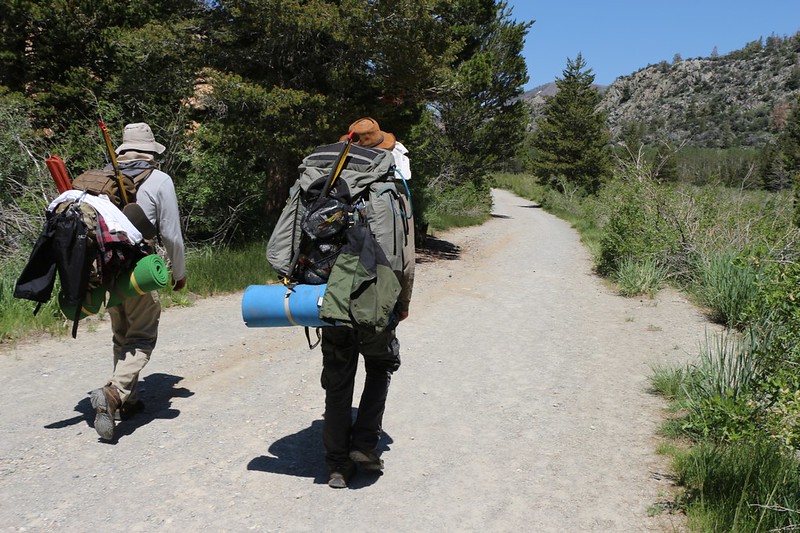 North Lake is about as full as it gets


By the time we got back to the cars our legs were shot and our shoes were soggy. It had taken us about seven hours to hike nine miles, which wasn't too bad considering all the sun cups that slowed us in the morning and all the downhill trail that sped us up in the afternoon. All in all, it had been a fun trip, but all three of us had to admit that this year it would have been better to wait until August. Or maybe even September.

For a longer trip report see My Website, for more photos and videos see my Flickr Album, and for a map showing our GPS track see my CalTopo Page.

Great report and some beautiful pictures. Thanks for posting.
"On this proud and beautiful mountain we have lived hours of fraternal, warm and exalting nobility. Here for a few days we have ceased to be slaves and have really been men. It is hard to return to servitude."
-- Lionel Terray
Top

jfr wrote: Trout swimming in one of the unnamed ponds below Paiute Lake.

This fish was about ten inches long, cruising along right near the shore. What kind of trout is it? I know that there are some serious fisherman on this forum...

Brook Trout. If fishing, you were probably 1.5 weeks early for ice out at some of the better lakes in Humphreys Basin.

Very nice TR!! and excellent pics! Always like to see dogs on snow. They do love it.
Top

That first log crossing going up from the campground.. was that this one? cuz, wow if it is.

Puppet Lk 2010 003.JPG
You must be registered and logged in to view the files/photos attached to this post.
Top

rlown wrote:That first log crossing going up from the campground.. was that this one? cuz, wow if it is.

No, that other shot was the second log crossing. This is the first one. And it's still "WOW!"
That's a lot more water. During flood stage the week before it must have been crazy.
You must be registered and logged in to view the files/photos attached to this post.
Trip Reports and PhotoJournal: http://hikingtales.com/
Top
Post Reply
6 posts • Page 1 of 1