Norman Clyde of the Sierra Nevada: Rambles through the range of light 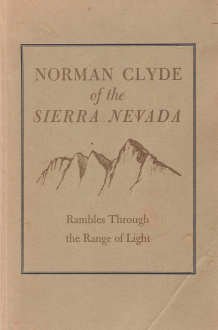 Norman Clyde of the Sierra Nevada: Rambles through the range of light; 29 essays on the mountains

Twenty-nine essays by the old gaffer. 29 Essays on the Mountains by Norman Clyde. Foreward by Francis Farquhar & (former president of Sierra Club), Prologue by Jules Eichorn (1930’s rock climber), With a long letter from Smoke Blanchard (climber and friend of Norman Clyde), 15 Photographs of the Old Gaffer . ‘Three thousand copies of Norman’s book were published by Noel Young Press, Santa Barbara, in November 1971’.

Challenge of the Big Trees