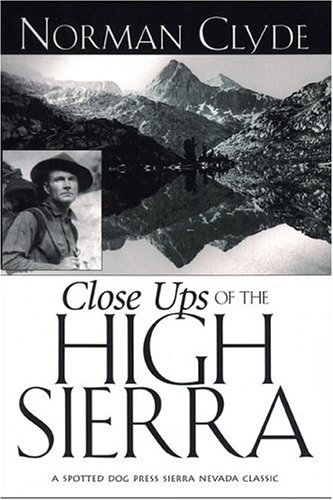 Close Ups of the High Sierra is a journey to the exquisite and remote backcountry of the Sierra Nevada in California, as told by that great mountaineer, Norman Clyde, who was credited with making more first ascents in the Sierra Nevada than Clarence King, John Muir, and William Brewer, combined. In the book Sierra Nevada, Weldon Heald said of Clyde, “(he) has probably made more mountain ascents than any other man who ever lived, not excluding Swiss guides. Certainly, he has no rival in the Sierra.” Yet in life, Clyde was not a member of any mountaineering aristocracy; his name appeared on no letterheads, nor did he found any great environmental movement or organization.

With a degree in Classic Literature, an old army hat, and great physical endurance, Clyde became a living legend. He drove nails into the soles of his boots for traction, so slick rock, ice and other obstacles could not keep him from reaching the summits of the mountains he wanted to climb. On cold Sierra mornings, he would recite Homer’s Iliad and Odyssey in Greek, while cooking breakfast for climbing partners at the campfire. He was one of a dying breed, a vanishing Victorian, which was evident in his writing style. One climbing partner remembered him as a proud and sensitive man, who was unable to grasp modern thinking. . .