If you've been searching for the best source of information and stimulating discussion related to Spring/Summer/Fall backpacking, hiking and camping in the Sierra Nevada...look no further!
Post Reply
116 posts

Yeah, it's winter. I'm bored. And the only thing active is these three threads about dogs. Let's stir the sh!t a little shall we?

And before you say it, I know what you're thinking: "You stupid contrarian hipster, of course you don't like the JMT. And you haven't even hiked it! Your opinion is garbage." True, sure, but unless you want to reread the 3rd thread about dogs, you're gonna read the rest of my stupid post because it's March.

Three Reasons the JMT Sucks
1) Logistics: The car shuttle, the permits, mailing yourself food, and most importantly the fact that it's 200 something miles, which even if you're taking a 14 day vacation barely fits into anyone's life. It's always strange to me that in order to go hiking on this trail, you probably need todownload this bot to apply for a permit the instant they become available. In the future, the JMT will be nothing but hackers & software engineers, and will turn into a great networking event for the software industry. Those folks don't bathe anyways, no one will notice they've been on trail for 8 days.

2) The Jolly Manure Trench doesn't actually go to the coolest stuff: Here's a list of things the JMT doesn't see: the biggest glacier in the Sierra, the biggest trees on earth, the deepest canyon in the US, the tallest waterfall in the US. It misses the entire eastern side of the crest, too. Here's two random pictures I stole from other members that aren't on the JMT, because why not: 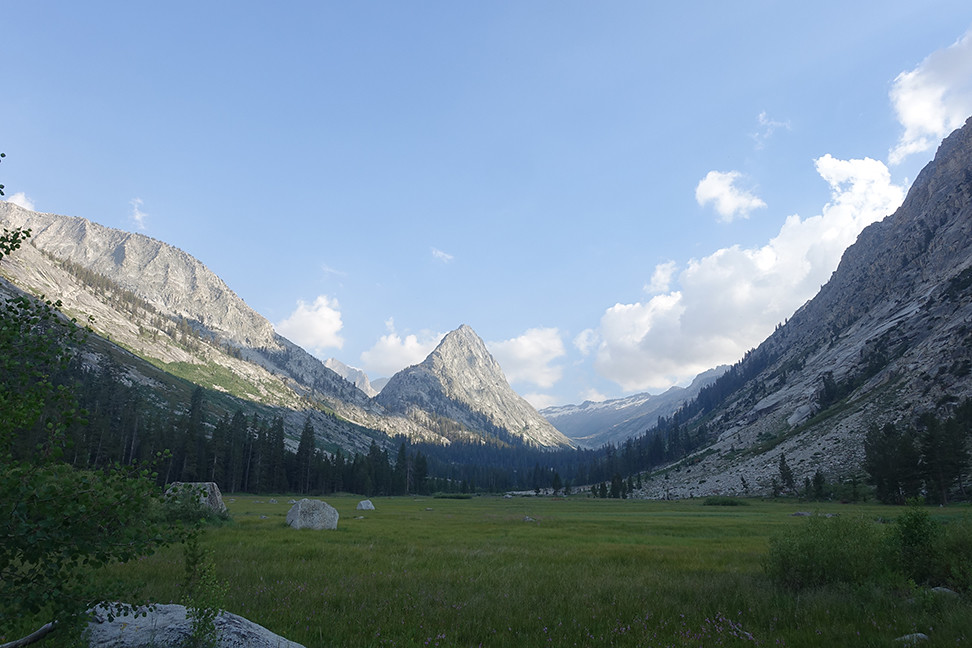 0450 Obligatory posed shot at Second Lake with Temple Crag looking awesome in the background - panorama by jfr, on Flickr

The Justa Million Tourists is really just a highway, connecting places in the Sierra. It technically doesn't even go to any of these places in Yosemite: Half Dome, Clouds Rest, and Vernal Fall. No one loves I-40 for crossing the US, so stop putting stupid JMT stickers on your Prius.

3) The route is mostly poop: Between mules, campers who suck at cat holes, and animal scat, the amount of poop you will encounter on the plodding class 1 slogfest is staggering. "Ah", you say, "you haven't hiked the JMT, so how do you know?!" Because the state of California was so concerned about the amount of poop on the trail, they had UC Davis study it. Given the slow rate at which alpine plants grow, scientists estimate 90% of the soil organic matter along the JMT is former poop. I may have made up that last fact, but you get the idea. Unless you're down for alpine scat night, skip the JMT.

"Adventure is just bad planning." - Roald Amundsen
Also, I have a blog no one reads. Please do not click here.

Well, my response is "sucks compared to what?". The JMT is heaven compared to the Bayshore Freeway.
-Phil
Top

You didn't vote in the poll. Not voting is a huge problem in this country, and this is the example you set?!
"Adventure is just bad planning." - Roald Amundsen
Also, I have a blog no one reads. Please do not click here.
Top

Looks like someone needs a time out?
Mountainman who swims with trout
Top

Wow - there's a lot of adrenaline in that post.
Top

The JMT sucks in the way that all named routes suck. It attracts so much attention from people who completely ignore the little things they do to destroy the wilderness that it's trashing the place and filling the corridor around the trail with entitled folk who literally give too many sh**s and don't bury them. The bears also suck, in the way that habituated bears do - won't leave people alone.

The scenery is pretty awesome tho. And the popularity gets it a lot of attention from trail crews. So it gives us somewhere to send noobs who need to learn better trail etiquette, so they'll leave the rest of the mountain range alone...

You can spin it any way you like, some of the resorts make a good living because of thru hikers.
Top

OK. Slowly put the coffee down and back away...

Have I done the JMT? Nope. Have I hiked a lot of different parts of it to get other places? Yep. Were those the best parts of my hikes? Never.

But Wildhiker has it right. It is better than the highways I have to take to get to the trailhead.

And yes, we tend to avoid it for the reasons you have noted. I actually like the fact that it attracts all the newbies, leaving the reset of the Sierra for me and my wife. I wish I could get the same thing to happen with mosquitoes....
Balzaccom


3) The route is mostly poop: Between mules, campers who suck at cat holes, and animal scat, the amount of poop you will encounter on the plodding class 1 slogfest is staggering. "Ah", you say, "you haven't hiked the JMT, so how do you know?!" Because the state of California was so concerned about the amount of poop on the trail, they had UC Davis study it. Given the slow rate at which alpine plants grow, scientists estimate 90% of the soil organic matter along the JMT is former poop. I may have made up that last fact, but you get the idea. Unless you're down for alpine scat night, skip the JMT.

You are misinterpreting the UC Davis study in my opinion. Did you at least read the abstract and the conclusions?

Here are the conclusions, which I quote:

"CONCLUSIONS: We found a low prevalence of human pathogens in pack animal manure on the JMT."

This seems contrary to what you're selling.
Top

I do not think your opinion of not liking the JMT is particularly unpopular- a lot of backpackers avoid these well known named trails. I will not "vote" because it is a lot more than yes or no. You can MAKE the JMT wonderful of awful depending on when you go, how you choose your nightly campsites, side-trips you take and other small trip details. As for being a long route, that may not fit your style but it does fit a lot of other people's style. A lot of backpackers, such as retired folks, students, those who have the ability to get unpaid leave from jobs.

Like others here, I have not done the JMT as one continuous hike but have done basically 90% of it as parts of other trips. I have done Roper's Sierra High Route as one continuous route, which in my opinion is superior, IF you are an experienced off-trail backpacker, particularly with some mountaineering experience. The JMT is a good substitute for those who prefer an all-trail route. All the big "named" routes have been very carefully thought-out and are very scenic. What "sucks" is not the route per se, but the heavy use.

I plan to do the JMT when I get too old to do harder routes (like to celebrate my birthday when I turn 80- may have to con one of my grandkids to be my Sherpa!), and when I do, I will do it off-season, fish a lot, take side-trips, camp well away from the trail itself.

I will agree that the permit process sucks. If you are not a purist, some of that could be mitigated by using different entry points and then picking up the beginning and end at different dates.

As for bad practices and attitudes on the trail, that is a demographic problem that impacts all trails, not just the JMT.
Top
Post Reply
116 posts