Feedback on a July 4th plan?

Feedback on a July 4th plan?

I'm taking 4 friends out on a backpacking trip schedule for June 30 - July 4th this year and was hoping to get feedback on the plan I had come up with.

I got a permit for Pine Creek TH and plan is to exit via North Lake, going via a mix of on and off trail through Lake Italy Pass, White Bear Pass, Feather Pass, and Puppet Pass. This is roughly following a portion of Roper's SHR. My questions for anyone with thoughts would be:

Conditions
1. What snow conditions to expect, particularly on the passes? I've been watching the snow charts and seeing that snow is quite low this year but not sure how to translate that into what to expect on this route (11+k feet). Would microspikes, crampons, or ice axes be advised for crossing these passes at this time of year or trail runners sufficient?
2. What mosquito conditions might we face? Most of my trips into the high sierra have been August or later with minimal mosquitos. Is it likely to be thick this time of year? Headnets a good idea?

Route
3. Would you recommend going over Italy Pass to Lake Italy and then turning left to head into Bear Lakes Basin OR go over Granite-Bear Pass? I've been over Italy Pass and found it very easy but worried the south shore traverse with the north facing slope could hold snow and be challenging. I've never been into Bear Lakes or tried Granite-Bear Pass - it would be more direct but worry it could be more challenging with snow on the approach?
4. Any lakes particularly worth visiting for either beauty or fishing? My friends have a casual interest in fishing and thinking I'll get them licenses but would wonder if fishing is likely to work and any particularly good lakes along this route.
5. Any other route suggestions including alternatives?

Thanks in advance!
Daniel

I did an early season trip last year (high snow year- 7/24-29). Pine Creek crossing below Pine Lake can be difficult at peak snowmelt. I used crampons to get around Royce Lakes. Not needed if you are willing to wait for the sun to soften the snow, but if you want the freedom to go early morning in shadows, then traction devices are nice to have. When it is warm in the day and still freezing at night, the snow gets very icy. You can look at the NWS forecasts and just put the square on a nearby area at 11,000 feet and see what the low temperatures are predicted, just before you go.

No fish in White Bear and Black Bear Lakes, but they are very photogenic. Lower lakes have fish. I would not say that this area has great fishing, but you can catch dinner. If you go out Humphreys Basin, the fishing may be better there. There are a few big goldens in Goethe Lake. The lakes on the east side of Piute Pass also have fish and most people just pass these by. The little lake on the bench above the lakes, off-trail to the south has nice fishing. Seven Gables is really scenic, but I have never tried to fish there. Did catch a few fish in Merriam.

Royce Lakes are very scenic but windy. I was just fly fishing last year, and it was too windy to fish. The upper Royce Lakes were still frozen.
Top

Nice plan - great area - route should work.
Thoughts: Perhaps consider flipping the route. First day up Pine Creek is a bit of a Bit-ch, and with newbies? Lots easier coming up up from North Lake, down Pine Creek.
Lots of talus.
Fishing...talking Goldens! A finicky fish but sweet red meat. We did OK most lakes, (Mike did his homework), especially at the higher Royce's and at the Seven Gables string of lakes (below Vee).
see - http://www.highsierratopix.com/communit ... +the+green
Mountainman who swims with trout
Top

I like it when people ask questions about areas I know something about. I was out in this area around Labor Day last year. Obviously much later season, but also a much higher snow year. I went in Dancing Bear and out Granite Bear; I didn't go over White/Brown Bear, but I did get a look at it from the top.

I don't see much value to choosing White Bear; coming from the east it is a longer and more challenging option than Dancing Bear without a major reward. I would choose between the more direct Granite Bear or the easier but more sloggy Dancing Bear. Granite Bear will definitely have snow on it, but you will be able to get a clear look at the pass while approaching through Granite Park. If it looks like it's out of your comfort zone you can just make a game-time decision and keep on going to Italy/Dancing. You will likely have snow on Dancing Bear as well, but the grade is more forgiving.

Sadly, I don't have a good picture of White Bear accessible, but the snow bank on the bottom part of the far right portion of this photo is the beginning of it:

This is Dancing Bear from Italy Pass; much closer and not particularly difficult:

This is Granite Bear (most of the way to the right, just to the left of the spire) from the bottom in Granite Park: 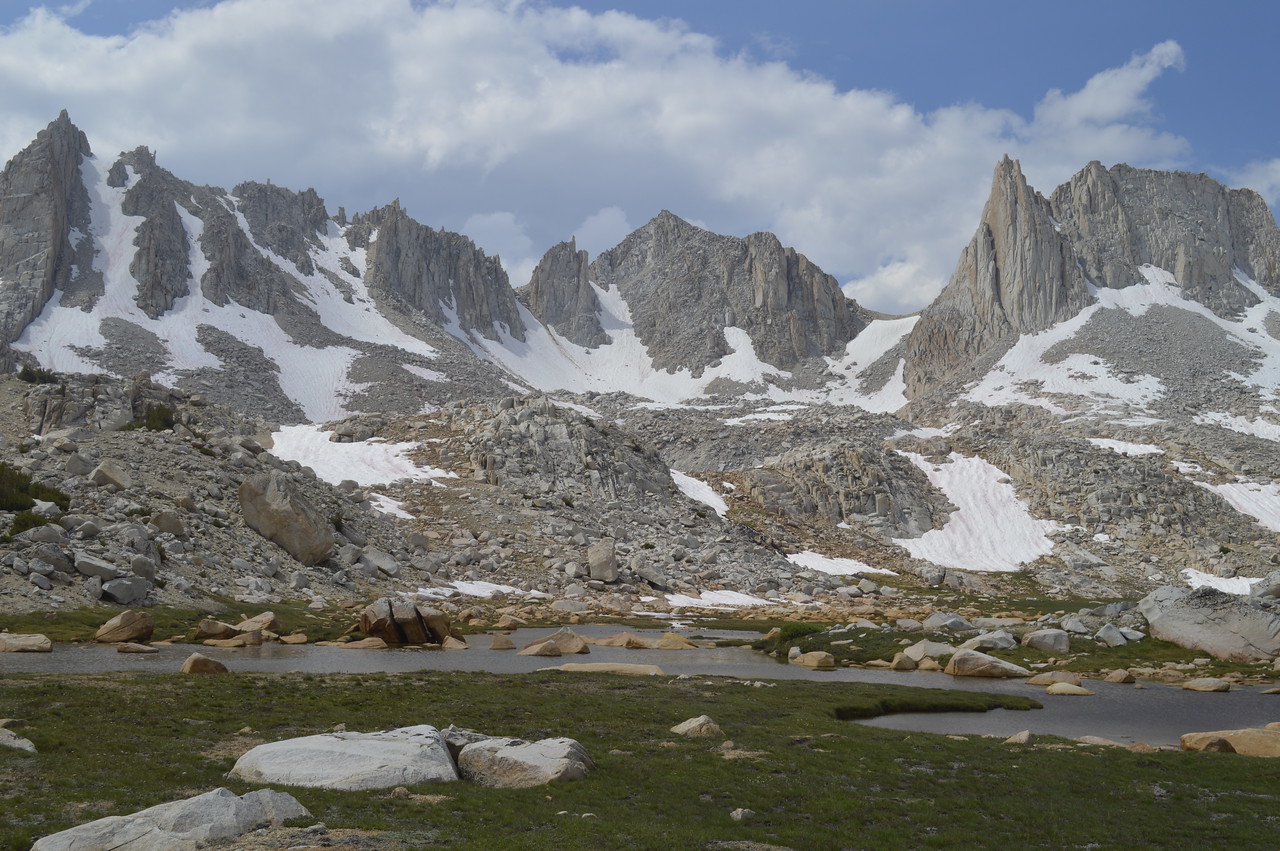 That last snow field at the top is the dicey bit. I came down it, and I would have felt comfortable going up it with the amount of snow present here, but not much more. At this snow level the last bit will require some creativity, at least at my comfort level, but there were a few options for getting through. You may well be more capable than me. Traction is never a bad idea, but we didn't have any and we met some groups in Bear Lakes Basin who went through without any. 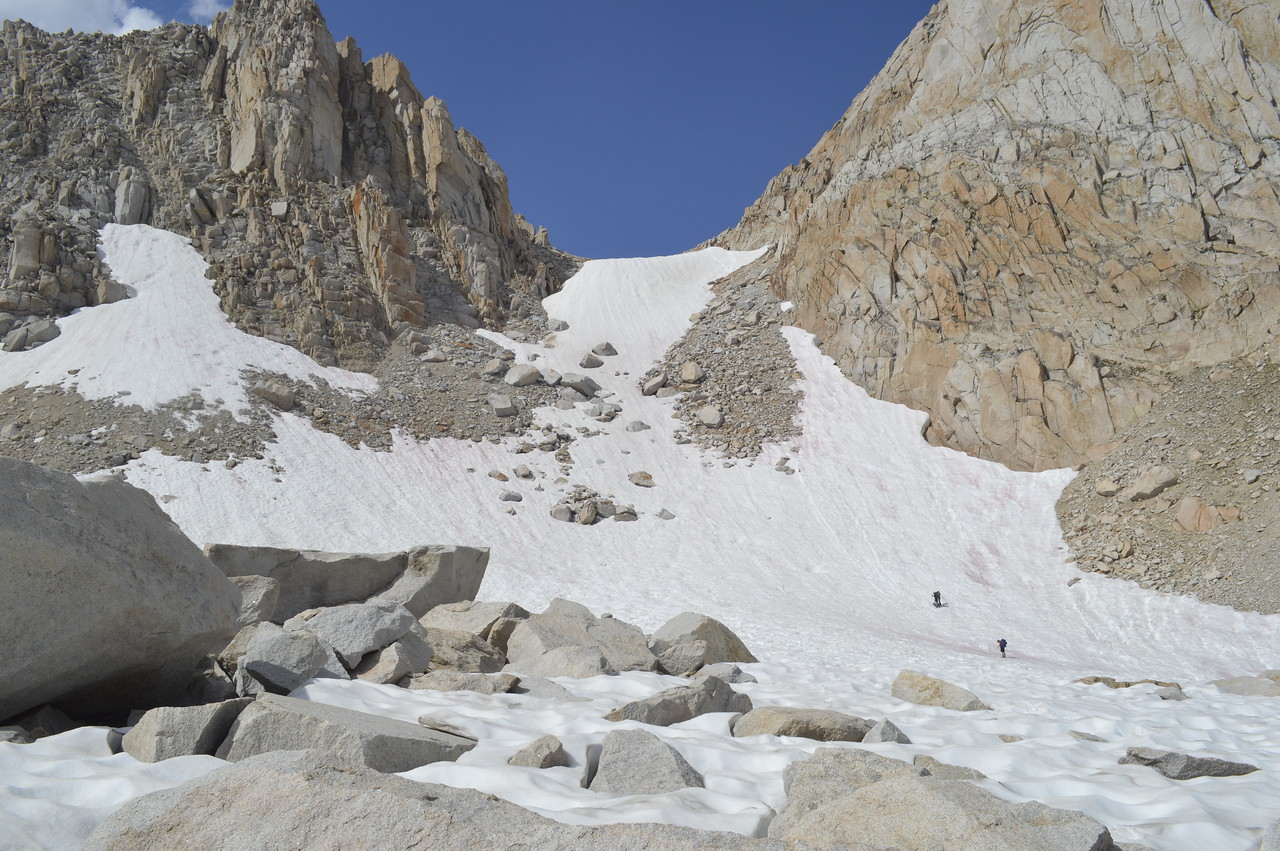 Close up of the steep part at the top:

Once you are over, the west side is trivial.
Top

The easiest route is definitely connecting Italy Pass with Dancing Bear Pass. I'm not sure what your experience level is, or those of your companions, but White Bear Pass is difficult at certain times. You can easily find yourself in some class 3 sections if you do not micronavigate correctly. I did this in September and the conditions are very similar to the photos papercup posted above. You will find lots of helpful information on this site with respect to the route in question.

If possible, Vee Lake is stunning. Although I doubt you will have time to work that in. It took me about 45 minutes to get there from Big Bear Lake taking the route via Little Bear Lakes.

Dancing Bear Pass may not be as exciting as Granite Bear but White Bear Lake (though fishless) is absolutely stunning, as is Vee Lake if you have time to make it over there.
white bear lake.jpg
You must be registered and logged in to view the files/photos attached to this post.
Top

I did not know about the Italy Pass --> Dancing Bear Pass route, looks obvious now on the topo and definitely good base case for our group. Very helpful to know to avoid White/Brown Bear Pass. We unfortunately only have a permit for going in via Pine Creek vs. N. Lake, otherwise would agree N. Lake a better starting point and good to acclimate through Humphrey's before tackling the passes.

Seems like we might have time for a morning trip to Vee Lakes given the mileage contemplated. Is continuing on to Seven Gables area a worth while day trip vs. more exploring in Bear Lakes or Humphrey's Basin?

The Traction question is problematic as we don't have any and will have 5 people going - buying gets expensive and renting seems hard. Wondering if we're only doing Italy/Dancing Bear, Feather/Carol Col, and Puppet Passes if traction is likely needed at this time of year? We have some varying skill/confidence levels so could maybe have some folks without if it's doable without?

Thanks again for all the input!
Top

As long as you're making decent time I think you'll have space to explore Bear Lakes a bit. It's not hard to navigate once you're inside. You will likely wind up at Big Bear Lake at some point, regardless of which entry point you choose. The lake immediately downstream from Big Bear (I forget the name) is beautiful and was probably my favorite spot in the basin:

From there, it's easy to just follow the topography around and down to Vee Lake. Once you're there, it's a quick and easy descent down to the Seven Gables Lakes (just follow the drainage and angle left), and an equally quick trip back up. Or you could just skip them and hop over the ledge north of Vee Lake to get yourself on the path toward Feather Pass if that fits into your plans better.

For your traction evaluations, here's a close-up of what you will be dealing with on Dancing Bear (note the person in the bottom left for scale):

Can't say what the situation looks like on Feather, Carol, Puppet.

Have fun! It'll be a great trip.
Top

We unfortunately only have a permit for going in via Pine Creek vs. N. Lake, otherwise would agree N. Lake a better starting point and good to acclimate through Humphrey's before tackling the passes.

I am confused as to how this washout impacts getting to Bear Lakes. The washout is supposedly upstream from the Pine Creek TH.

When you get your permit you may just check and see if any permits going in via North Lake were cancelled. Not sure if you want to wait until 11AM, but there may be no-shows. I usually get my permit at Mono Visitor Center. Many times I have been able to get what I thought would be impossible (last year I got a Whitney Zone exit). Anyway I would do plans for both Pine Creek and North Lake and just see what happens.
Top
Post Reply
10 posts • Page 1 of 1