My daughter and I just returned from a trip to Twin Island Lakes and Blue Lake that was inspired by lvray's TR of last year http://www.highsierratopix.com/communit ... hp?t=14911 and Maverick's comments (thanks!). The route looked appealing because it avoids high-elevation north-facing slopes that might contain late-season snow. Our planned itinerary was similar to lvray's although we added a couple of layover days to allow for day hikes from Twin Island and Blue Lakes.

As we were driving on Minarets Road on the way to the Clover Meadow ranger station on the afternoon of Aug 7 we could see the beginning of the Butte Fire behind Balloon Dome. This wasn't an auspicious start to the trip. But the wind was blowing to the east and the ranger didn't seem all that concerned so we headed up to Hemlock Crossing from the Isberg trailhead on the morning of Aug 8. A trail crew and several university researchers were staying at Hemlock Crossing so camping spots were limited, but we managed to find something acceptable in the back forty. However, the next morning the wind had shifted and was blowing smoke to the north, directly at us, which was concerning:
bridge_and_smoke.jpg
But we soldiered on and were rewarded by midday when the wind shifted again toward the east, keeping the smoke away from us, and it mostly stayed away for the remainder of the trip. We were also fortunate to have high temps only in the high 60s for the climb to Twin Island Lakes and in fact for most of the trip, along with light breezes that kept what few mosquitoes were still around at bay. We camped at the north end of the north twin island lake:
north_twin_island.jpg
The next day we day hiked up into the basin north of the lakes, which was idyllic. The streams were still flowing well, there was just enough snow to add visual interest without being bothersome, temps were mild, mosquitoes were not an issue and the views were grand. Just a perfect day:
shangri_la_gates.jpg
shangri_la_cascades.jpg
some_mountains.jpg
An interesting snow collapse:
snow_doughnut.jpg
The next morning we set out for Blue Lake. One of the few mosquitoes we encountered managed to photobomb my camp departure picture:
stream_and_mosquito.jpg
I had been so focused on the upcoming cross country traverse to Blue Lake that I stupidly neglected to plan our route to the outlet at the south end of the north lake properly, with the result that we wasted time on a couple of ill-advised short cuts before finally reaching the outlet. On the way we did end up with a nice view of the SHR at the waterfall coming down from Lake Catherine:
SHR_waterfall.jpg
The outlet crossing was waist deep and cold but not particularly dangerous:
wading_the_outlet.jpg
The south lake:
south_island.jpg
(cont'd)
You must be registered and logged in to view the files/photos attached to this post.
Last edited by druid on Thu Aug 17, 2017 1:03 am, edited 4 times in total.

Because of our slow start, we decided to forgo the Blue Lake layover day and instead camped at Roper's "wild and beautiful" lake, which we found to be as advertised, despite a bit of lingering Butte Fire smoke in the distance:
wild_and_beautiful.jpg
The next day we finished a fortunately uneventful talus traverse over and down to Bench Canyon. Roper's description was again right on the mark as Bench Canyon was an absolute fairyland and a real joy to stroll in:
bench_canyon.jpg
We made it up to Blue Lake by early afternoon:
blue_lake.jpg
At Blue Lake we saw the first other hikers we had seen since leaving Hemlock Crossing, a couple who were apparently hiking the SHR and a solo hiker doing it in reverse. We had time for a short afternoon day hike part way up Foerster in order to enjoy the views. The following morning we headed over the saddle to Rockbound Lake:
rockbound.jpg
and down into Long Canyon. After some more easy cross country in the canyon we headed up a tributary of Long Creek on the Long Creek "Trail". We managed to follow a few blazes at the start of the trail before losing it entirely. We picked up the trail again at the Sadler Peak saddle only to lose it each time it crossed a meadow as well as a few other random times. But with a bit of care we managed to stay within a few dozen yards of where the trail should have been. On the other hand extensive blowdowns made our progress on the trail section much slower than the easy morning cross country had been. Once when we were crossing a long trailless meadow and had stopped to photograph flowers we looked up and happened to see a "helpful" trail sign that we would never had noticed otherwise:
wheres_waldo.jpg
We decided to forgo our planned side trip to Cora Lakes and its probable crowds and instead camped just below Chetwood Cabin. The following morning we finished the easy walk back to the car at the Isberg trailhead. All in all, it was a wonderful trip to a beautiful region neither of us had visited before.
You must be registered and logged in to view the files/photos attached to this post.
Last edited by druid on Thu Aug 17, 2017 12:31 am, edited 2 times in total.
Top

The flowers on the trip were spectacular. In the past, given a choice between flowers in July and no bugs in August I've usually chosen the latter, so it felt a little like cheating to have the best of both worlds this year. We couldn't resist taking a few snapshots:
flowers1.jpg
flowers2.jpg
flowers3.jpg
flowers4.jpg
flowers5.jpg
flowers6.jpg
flowers7.jpg
flowers8.jpg
Not a flower:
a_muscaria.jpg
You must be registered and logged in to view the files/photos attached to this post.
Top

Thanks for the TR and photos! I was last in Bench Canyon in August 2010 when there was little snow, but lots of bugs and flowers together. We also exited via Long Canyon. We headed cross-country down the west bank of Long Creek, past the two little lakes, and then at the next side creek flowing north into Long Creek, started contouring up the forested slope below the granite knob until we hit a well-defined packer trail. We followed that with no problems south to the saddle east of Sadler Peak. There we left the trail and headed over to Lost Lake to camp. From Lost Lake, we took a straight south path through the open forest to hit the Hemlock Crossing trail and returned on that to Granite Creek. So it was interesting to me to hear your report that this packer trail is less distinct south of the saddle east of Sadler Peak.
-Phil
Top

I didn't see any of the usual evidence that packers had been up the Long Creek trail in awhile. There were a great number of downed trees south of the Sadler saddle. Perhaps many of them have been there since the big 2011 windstorm. I noticed that one map on the wall in the Clover Meadow ranger station doesn't even show the Long Creek trail any more. There's no sign at the Chetwood Cabin intersection and if you didn't know there was a trail there it would be easy to walk right by without seeing the faint remnants. In many places the trail is still quite obvious but in wet low lying areas it's completely overgrown. We didn't see anyone else on the trail the day we were there.
Top

Well, our cross-country route in 2010 from the saddle east of Sadler Peak to Lost Lake and then the main Hemlock crossing trail was actually quite easy. Mostly open forest.
-Phil
Top

Wildflowers are very nice this year, gotta love that area, so much to offer. To bad about the smoke, but I guess it could have been much worse.
Professional Sierra Landscape Photographer

I like that shot of your daughter crossing the ford - deep yet slow. I camped at upper Blue lake after starting @ TI lake last July. Bench canyon was a welcome relief after clambering through talus all day. The next morning, I headed over the pass on my way to the HST meet-up. Here's a shot of the other side of the pass. The Isberg trail is down below the ridge in the forefront: 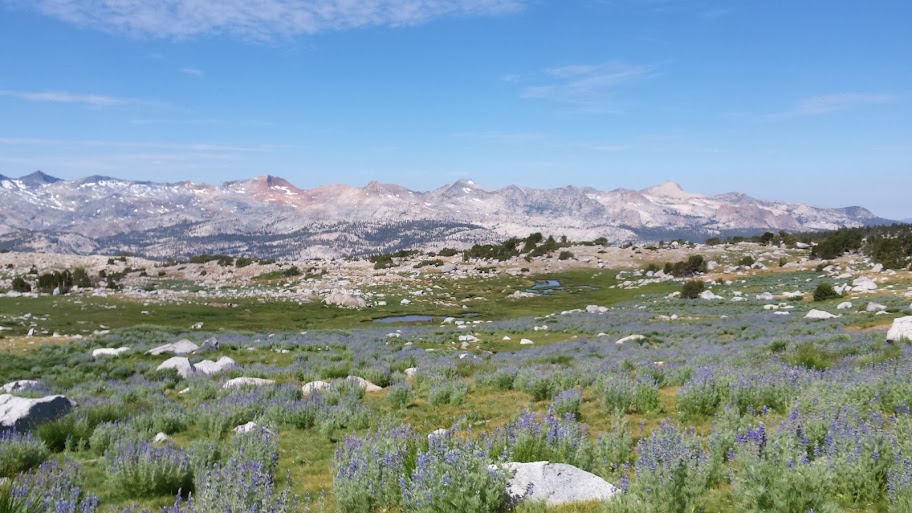 Hi-infrequent poster here. Just wanted to add that I came down from Sadler saddle last summer and had the same experience as Druid-the trail was quite clear in some places and completely hidden in the meadows. I also remember a lot of tree fall in one area. We climbed Sadler and I saw in the peak log that Elizabeth Wenk had been through just before. It was fun seeing a sierra celebrity name, and that she is still out there!