If you've been searching for the best source of information and stimulating discussion related to Spring/Summer/Fall backpacking, hiking and camping in the Sierra Nevada...look no further!
Post Reply
33 posts

Hey guys,
I've been a lurker on this site for a year or 2 since I stumbled onto it. My kids are now 9 and 7 and they're now excited about the idea of a backpacking trip so now I'm looking for advice. I backpacked as a kid and through college but somehow stopped with all the life changes that occur around that time.

I would consider myself a fairly experienced backpacker and comfortable on and off trail although I prefer on trail most of the time. However since I'm with the little kids I'd obviously prefer a fairly simple trip. I was thinking of a quick trip to start, probably a short hike Friday evening to just get started and then 3-5 miles on Saturday and Sunday but shorter is fine too.

My kids love fishing so if we could hit a lake or stream with some eager fish that would be even better (size really doesn't matter). We live in Amador county and I was thinking of going somewhere near Silver lake, perhaps Showers lake, but I've never been there. We could also go up near Loon lake or anywhere else in that general area.

We were looking to go the weekend of Aug 4,5,6. Any advice is appreciated, either on locations or on tricks of backpacking with little kids.
Thanks!
-Eric

If you're in Amador Co. the area around Winnemucca Lake or Round Top Lake. is prettier than Showers Lake and is very suitable for a beginning backpack trip. As of early August the wildflowers should still be pretty good too. My recollection is there are camping restrictions in this Carson Pass area (Carson Pass management area) and you have to camp in designated campsites or such (and there may be some places you can't camp), so check on the various specific regulations. Winnemucca is also a pretty good lake for fishing because it has fairly numerous brook trout that, although not very big, can be fairly easy to catch owing to their numbers. Emigrant Lake (Mokelumne Wilderness reached from Caples Lake) is also a good choice and it is outside of the Carson Pass management area. Last I heard it has pretty decent fish (bigger than Winnemucca, not as numerous, but numerous enough to give your kids a good shot). If you are considering west side Desolation Wilderness sorts of trips, as I see with your Loon Lake query, I think going out of Wrights Lake to Twin Lakes is better. There is a nice recent trip report from Twin Lakes: http://www.highsierratopix.com/communit ... =1&t=16289

By early August the Loon Lake area is lower and hotter because its elevation is low and it is a moderately long hike (~7 mi) to reach the Desolation Wilderness boundary near Rockbound Lake, although the elevation gain is pretty minimal. Moreover the area you cross before getting to Rockbound--the Spider-Buck Island Lake area--has a fair number of crowds that come in via the Rubicon jeep trail. In contrast Twin Lakes is less hiking distance, with a bit more elevation gain (but still pretty mild) than Rockbound, and it is higher and cooler. The fish, although much smaller than those in Buck Island and Rockbound, are much more numerous and easy to catch in the Twins, so they'd be more fun for your kids.

Advice? I have in fact backpacked with little kids, beginning when ours were small enough they were carried part or all the way in our backs, but this is not to say that my advice will be useful because every kid is different.

I would recommend taking the kids on a warmup hike before the backpack trip if they haven't been hiking this summer yet. If you haven't hiked much with your kids do not overestimate their hiking capacity. It is best to err on the conservative side if the kids are going to enjoy it. Unless you know they are super strong hikers I wouldn't go more than about 4 mi and 1000' of gain in a day and I also wouldn't have them carry much (ie you may have to consider taking their sleeping bags and stuff). I remember my first backpacking trip was when I was 8 and it was to Pear Lake in Sequoia NP followed by a climb of Alta Peak. The hike was no problem for me, so as long as I didn't have to carry anything. My dad had started me off conservatively by putting shoulder pads on the stuff sack with my sleeping bag (granted it was a pretty big and heavy one), but soon the sleeping bag was stuffed in his pack and a jacket replaced the sleeping bag in my makeshift daypack and by about mile 2 everything I had was strapped on my dad's back. I was a very strong hiker without load at that age but had trouble with any sort of a load. In contrast, my kids at the same age were not nearly as strong hikers as I was without a load, but they could put up with carrying a bit. All kids are different. Easier is better for the first trip. Your kids may prove to be super strong, but it will be best to raise the odds that they will enjoy their first trip by keeping the hiking and carrying mellow.
Since my fishing (etc.) website is still down, you can be distracted by geology stuff at: http://www.fresnostate.edu/csm/ees/facu ... ayshi.html" onclick="window.open(this.href);return false;
Top

I started with my kids when the youngest was 8. The oldest was 12. We started out with a couple of 1 to 3 night trips. Within a couple of years we were doing 5 - 6 night trips. The youngest only had a fanny pack with water and snacks and a whistle. We would keep the daily milage down to about 4-6 miles a day until the youngest was 10. My oldest son still backpacks with us and has done the complete JMT with us a few times. We try to do one trip a year together. My youngest is a climber and uses backpacking for overnight approaches to climbing.
Jeff
Top

Ok.. They are young kids. Best to pick a place to base camp, even if a campground and then select day hikes. The major problem will be skeeters for your date. What I saw from the last Winnemucca topic on that area was it was a snow fest. Kind of in GB's camp. You could camp at Silver, and then explore areas near or around Carson pass and stay out as long as the kids want to be there. It doesn't all have to be about backpacking at this stage. It is teaching skills needed for backpacking. Best done in day hikes and maybe one over-nighter, but the kids have to feel comfortable.

Welcome to the HST forum, Eric and kids !!
Top

I appreciate all the feedback. I should have added earlier that my kids are familiar with hiking already, in fact last weekend we did a 2 or 3 mile hike starting from silver lake and the kids loved it. We camp 4-5 times a summer so that part isn't new either, I hope we're ready for some real backpacking.

I'll look at Winnemucca and Round Top some more. If we start from Woods lake it looks like it would only be a 4 mile round trip hike, broken up over 2 days that is very doable.
-Eric
Top

With such young kids, best keep the hike on any one day under 2 or 3 miles without much vertical rise. I like GB's suggestion for Emigrant Lake that is 4 miles and 600 feet total. Getting a wilderness permit for Winnemucca is likely to be an issue because it is very popular with wildflower enthusiasts but not Emigrant. After a short level one mile hike along the reservoir, you could camp the first night at the 1.2 mile point where there is a wide flat at lake edge or at 2 miles where Emigrant Creek enters Caples Lake that of course has a lot of stocked trout. One has to at least camp 300 feet from Emigrant Lake that has eastern brook trout. Like the Winnemucca Carson Pass area it has the same rich volcanic geology so lots of wildflowers.

Hot link to someone's nice image of the lake: 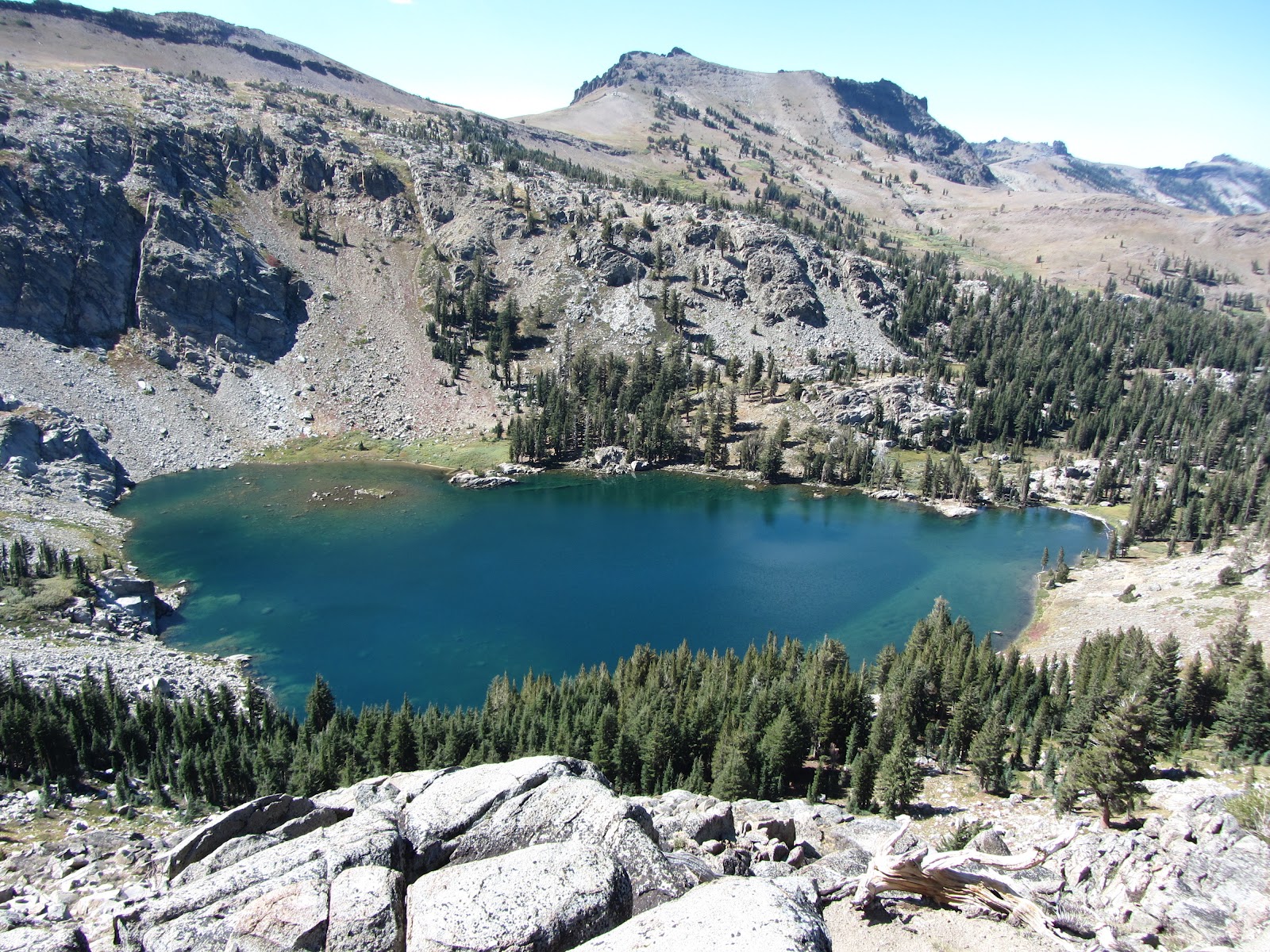 The Silver Fork of the American River/Caples Creek area is relatively close to you and works pretty well for a short overnight trip with kids. Not exactly breathtaking alpine scenery, but some nice meadows, cascading creeks with lots of places to play along the banks, and kid friendly tread/elevation. I've taken my oldest son twice now, once when he was 4 and again when he was 5, and both times we had a blast. No use permits or quotas and you can have a campfire (with free CA fire permit, when allowed). 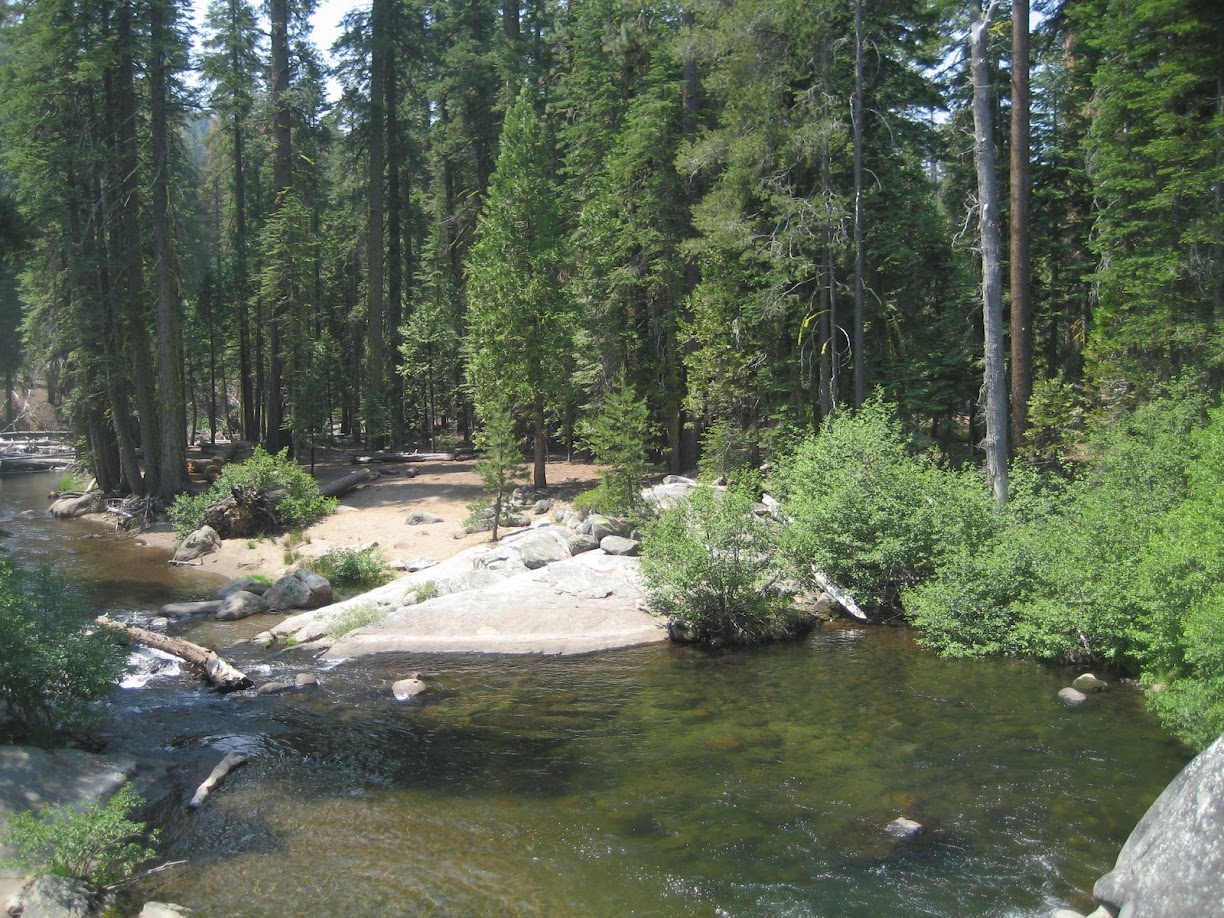 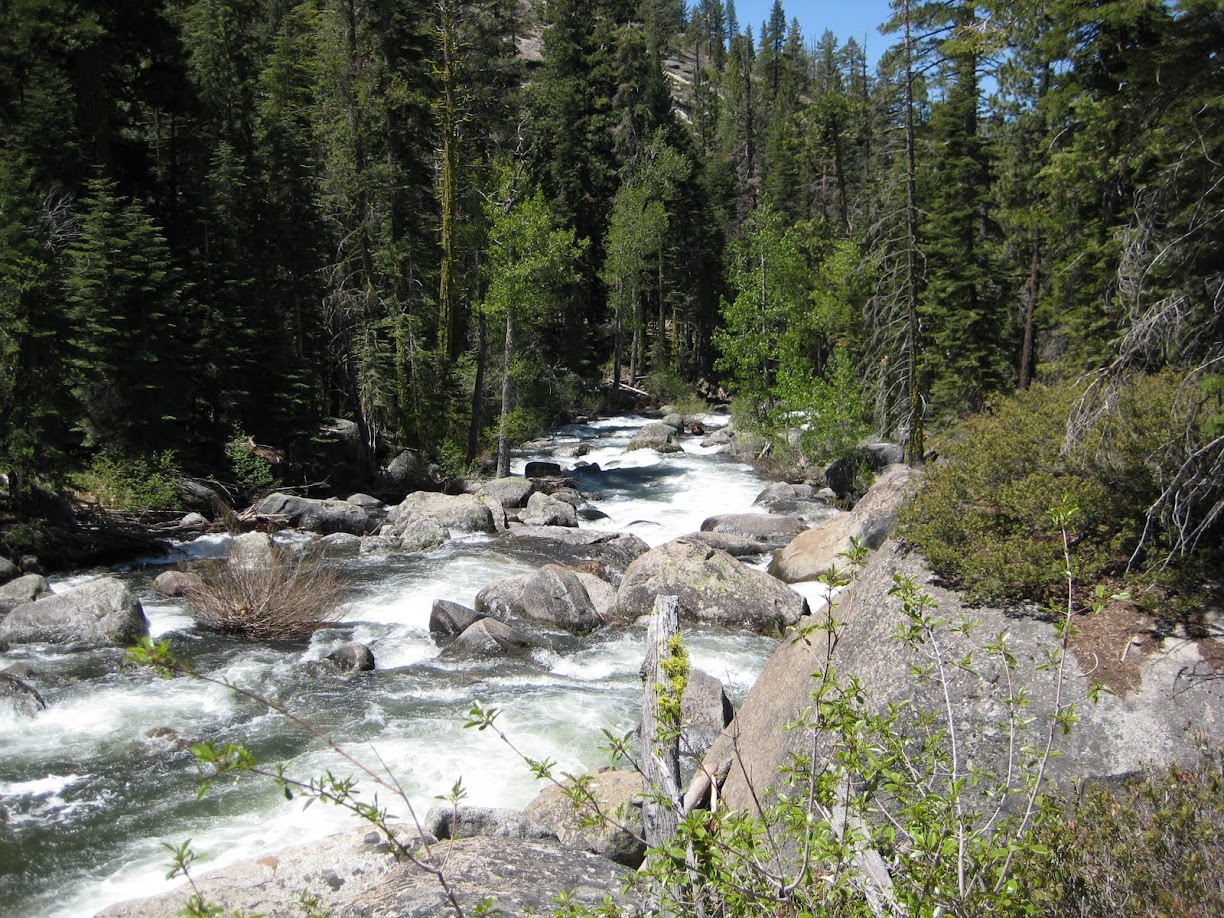 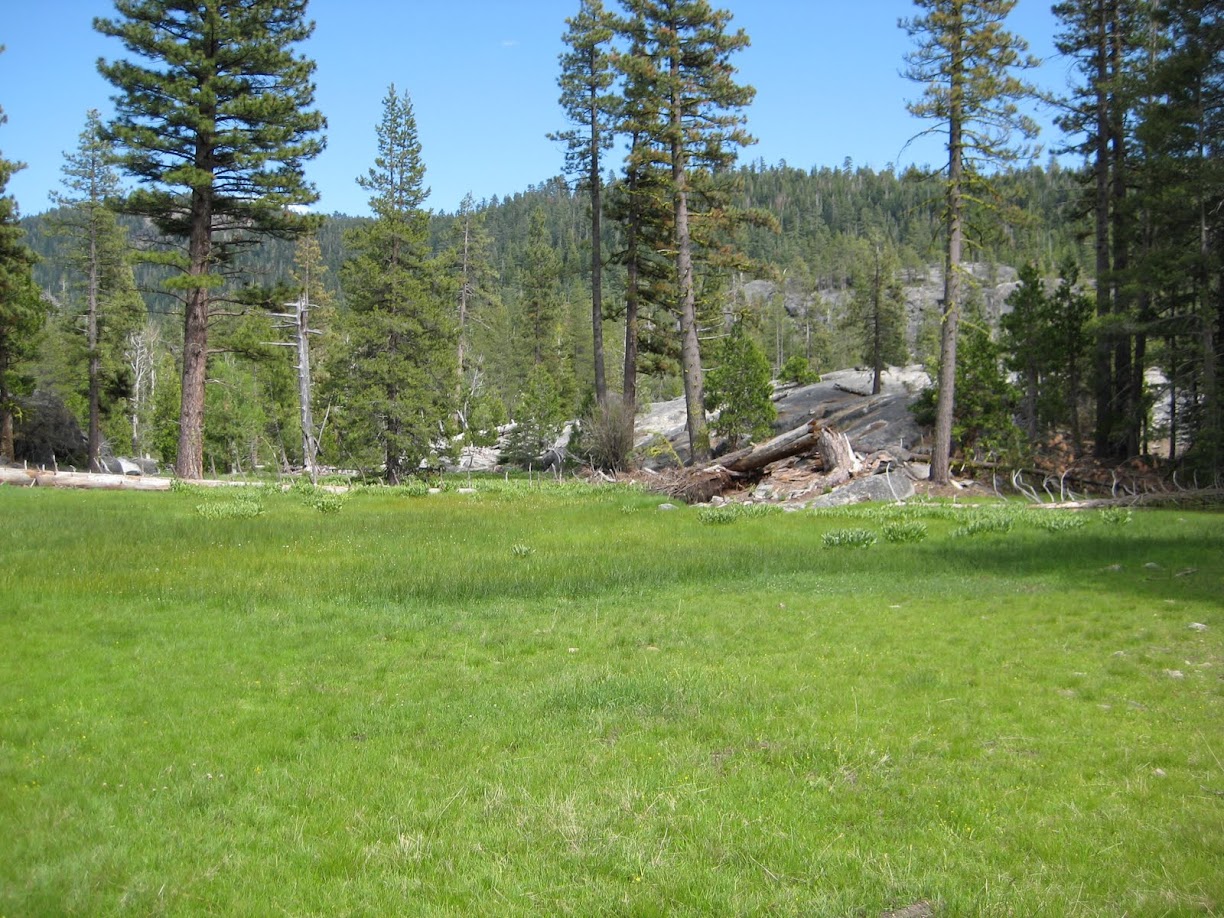 More info here: https://www.fs.usda.gov/Internet/FSE_DO ... 018779.pdf
Driving map: https://goo.gl/maps/Hi5hFcmWf8L2
Caltopo: https://caltopo.com/m/JSTB
Last edited by FeetFirst on Wed Jul 19, 2017 3:41 pm, edited 1 time in total.
I'm still rather convinced that you can achieve more than you've ever dreamed of if you just lower your standards.
Top

SSSDave, any idea how the fishing is at emigrant lake?

FeetFirst, it sounds like you just hike up along the edge of the river until you find a spot you like? Is the fishing decent? I think my kids will mutiny if we camp next to a body of water and nobody catches a fish.

Is there a trail along the river or is it more off trail? Honestly this was on my list of places to check out for fishing, I just haven't gotten to it yet.

BTW thanks for all this advice guys, I really appreciate it.
-Eric
Top

efinley wrote: FeetFirst, it sounds like you just hike up along the edge of the river until you find a spot you like? Is the fishing decent? I think my kids will mutiny if we camp next to a body of water and nobody catches a fish.

Is there a trail along the river or is it more off trail? Honestly this was on my list of places to check out for fishing, I just haven't gotten to it yet.
-Eric

Yes, all on trails and they mostly parallel the river and creek, which are usually within earshot. No promises, but I've had decent luck fishing there.
I'm still rather convinced that you can achieve more than you've ever dreamed of if you just lower your standards.
Top

We spent the weekend at Stockton Camp on Silver lake and my 9 year old son saw the trail map at Allen's corrals trailhead (between Plasse's and Stockton camp) and is very excited about the idea of backpacking up to Hidden Lake and Granite Lake. The distances all look very doable if we were to hike to Hidden Lake on Friday, Granite on Saturday, and then down to Silver and back to the car on Sunday. Does anyone know anything about these lakes? Are there decent spots to pitch a tent on these lakes? Are there any fish?

BTW, we went fishing at Caples at the damn/trailhead and encountered a variety of people hiking. Them mentioned that about 3.5 miles in they encountered a fair amount of snow on the way to immigrant lake, this has given my wife some pause about heading that way next weekend.