If you've been searching for the best source of information and stimulating discussion related to Spring/Summer/Fall backpacking, hiking and camping in the Sierra Nevada...look no further!
Post Reply
21 posts

A two night backpack over Taboose Pass to Bench Lake and return.
I left Bay Area on Thursday morning 09/22/2016, crossing Tioga by mid-morning, after overnight snow had dusted peaks over about 11,000 ft. Cold temps and blustery winds over the pass. Passed Mammoth area with no smoke from fire earlier in the week, but descending to Bishop there was smoky, smoggy air. Picked up the permit with a slight delay, overly helpful personnel for those ahead of me. Got to Taboose turn-off about 1:30, and took 20 minutes for careful drive to the trailhead. Only four cars at the lot. The trailhead is just outside the wilderness boundry, along the creek, in the high desert terrain. On the trail under cool, breezy conditions. Trail curves beside the creek, which is out of sight beyond a berm, hidden by willows. 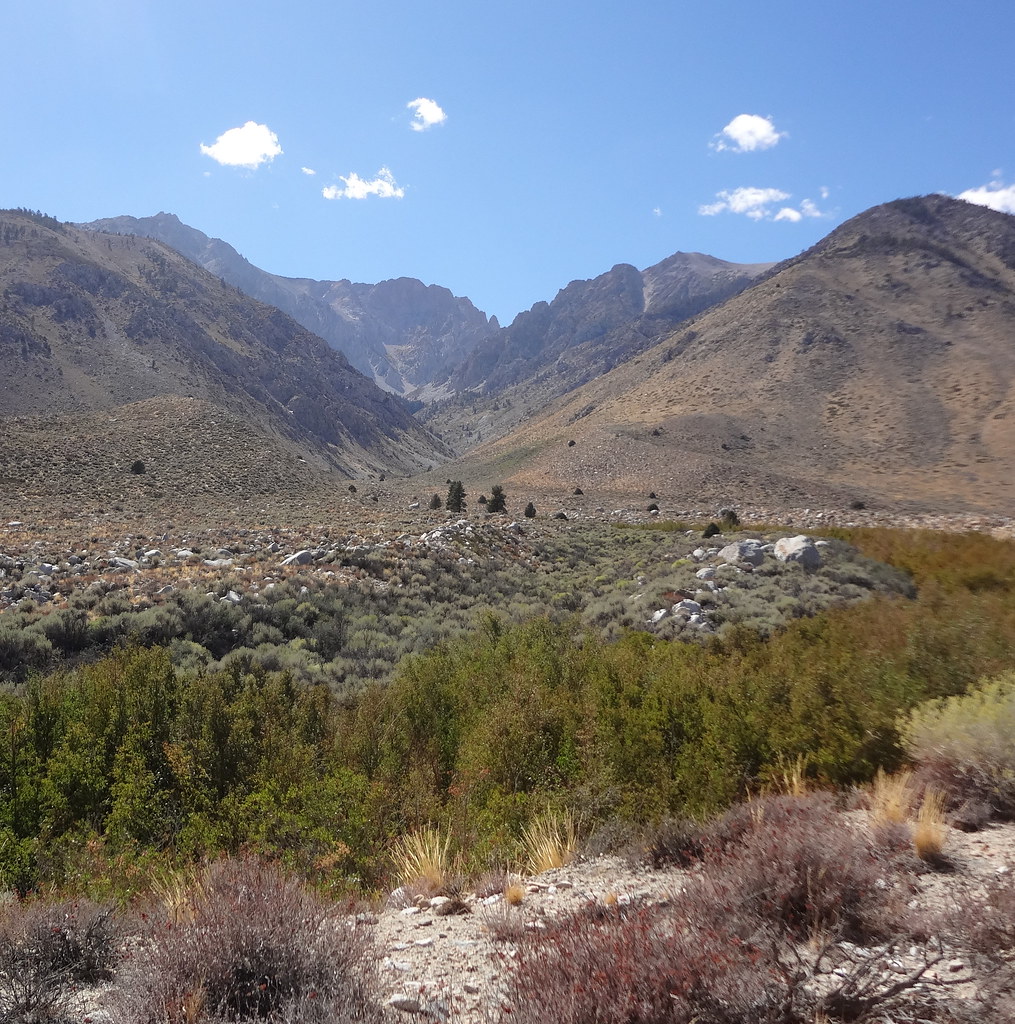 As it approaches the mountain, the trail stays right and increases its angle, and the sand gives way to scree/gravel. Entering the canyon, the wind increased,and temperatures cooled with elevation. Trail climbs the north side of canyon, approaching the creek once about 2 miles in. Past this point I met a couple of backpackers who were leaving the JMT after 12 days out. It seemed they had endured 3 days of cold days and nights, plus some rain/snow, and were willing to hike out to the highway and hitchike to their car. A little later another JMT refugee hobbled down the trail, a sprained knee he thought. Just before the trail returns to the creek, another pair of hikers passed on their way out, warning of lots of bear sign.
At about 4 miles the trail crosses the creek in a narrow, overgrown channel with cascades which even this late in the season was flowing vigorously. 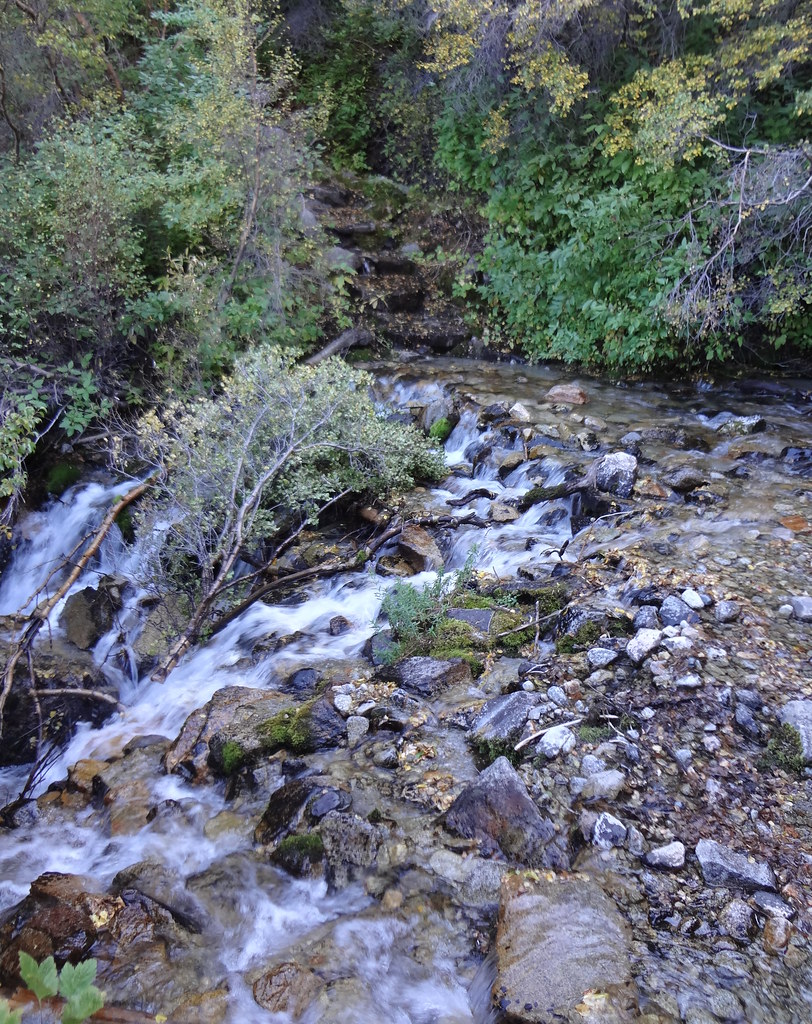 The creekside here seemed a grotto, deeply shaded, cool and damp, with weathered mossy wood stairs. The sun had passed behind the spurs to the west, and the temperature was dropping, plus I was getting chilled from the sweaty climb. Hiked up the trail another 1/4 mile plus under the first forested shade, and reached the first campsite. with a no fires posting. Got setup in time to catch last light over the desert, while the wind gusted. Got into thermals, and into the down bag, and warmed up enough to actually sleep pretty well, better than my usual first night out. Before midnight the wind died down, and a clear dark night sky was displayed.
Friday morning, up with the frosty dawn, and was entertained by the sun crawling down the face of the spur of Goodale Mt. 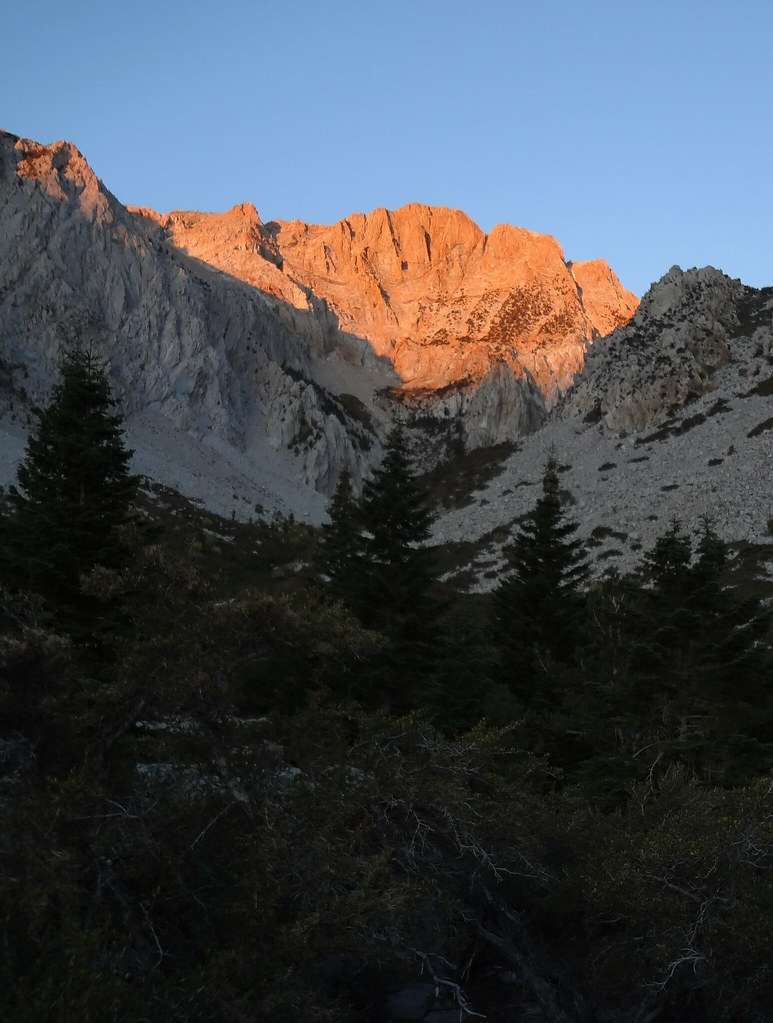 On the trail about 8:00, and felt really good, enjoying the views up canyon, plus the stream cascading when visible. A short time up canyon there was a show of fall color, not yet at its peak. 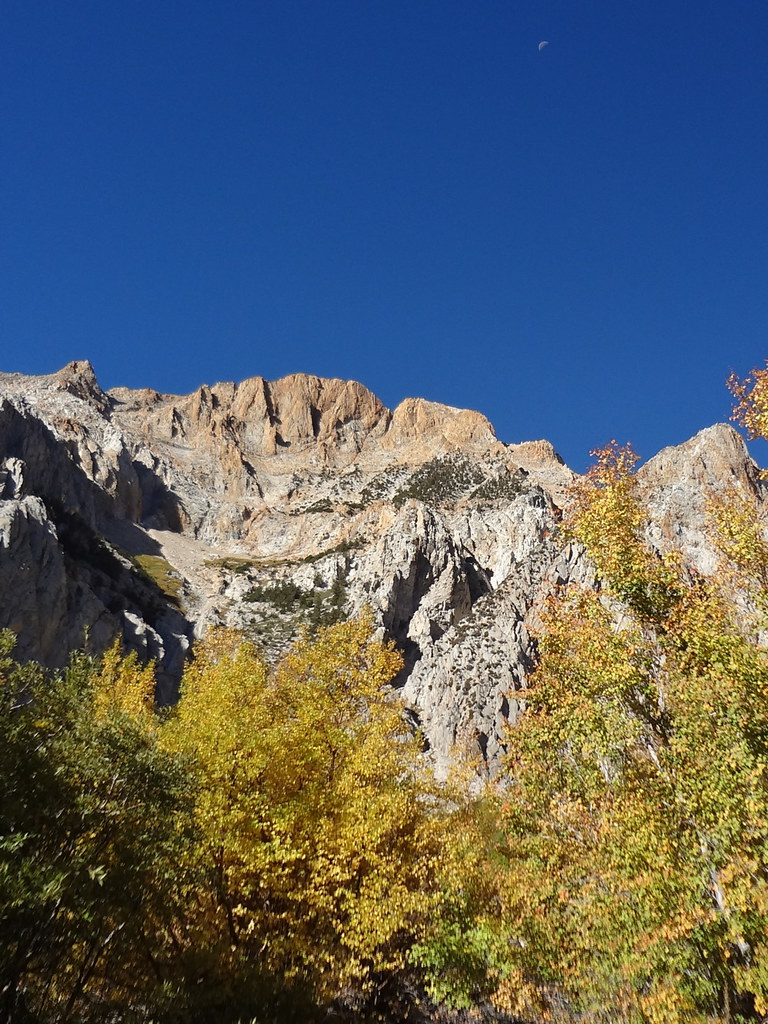 Passed more campsites below and above some small waterfalls, with stretches of switchbacks after the trail recrosses the main stream. The north side canyon is mainly talus crumbling steeply from the mountainside. The trail switchbacks up these slopes at a generally moderately steep but steady angle. Maybe the good night's sleep helped, plus cool temperatures with a light breeze, but I managed the uphill pretty well.
Above the campsites met a sole backpacker on his way out after 10 days of cross-country among the Upper Kings basins. Longstaff Tom , he carries a 6 or 7 foot aluminum pole instead of trekking poles, better for boulder crossing, talus testing, admitted he used the HST to research his routes. The section of trail from the first creek crossing passes beneath steep, some times vertical-faced cliffs until it reaches the bouldery plateau near the pass, no headwall on this trail. At the pass the view to the southwest is celebrated ( Arrow Peak and Bench Lake), but I was more impressed as the trail veers to the south and the view of Murro Blanco, and Mt Ruskin emerges. 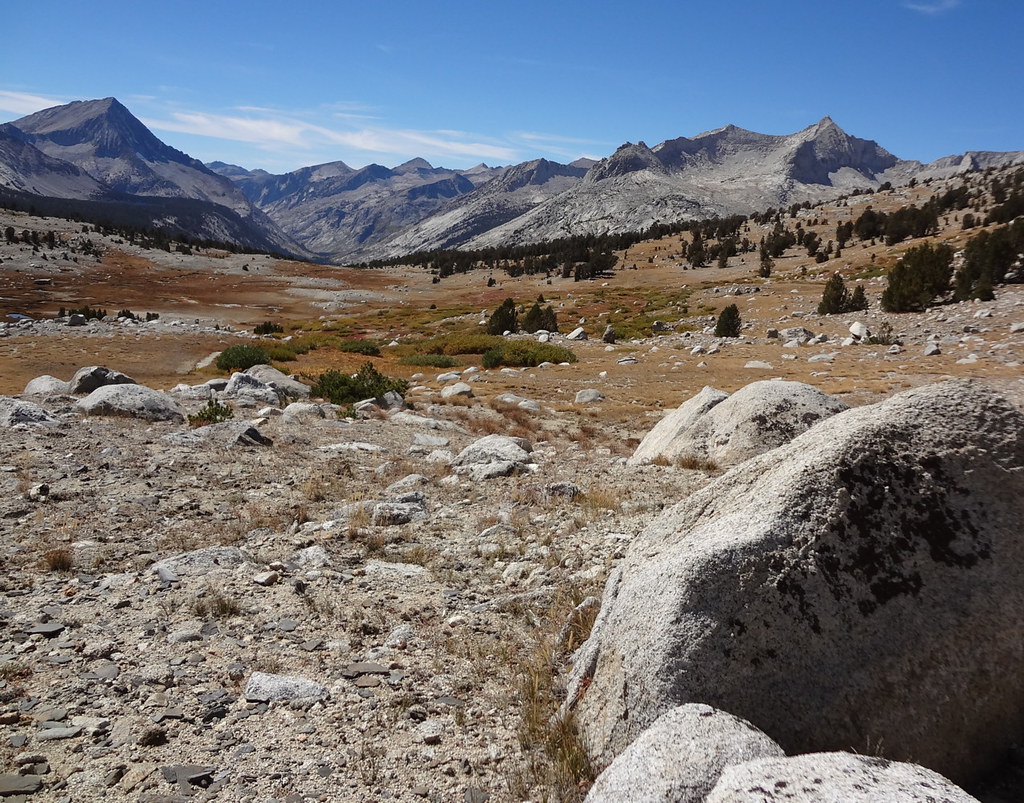 Downhill the trail crosses alpine tundra and some dried streambeds to reach treeline after about a mile plus. Another mile or so through lodgepoles and the trail ends at the JMT. I was little ahead of schedule, mid-afternoon, so I turned left past the Bench Lake trail to see how far I could get to Lake Margerie. passed a JMT hiker who was moving slowly with sore feet doing a section to Kearsarge Pass, Got to the lakelet below Margerie, saw that it must have a great background of red peaks, but turned around to get to Bench Lake, Passed through a meadowy section,where I had to contend with deer which straddled the trail. Expansive views from the trail into Upper Basin. 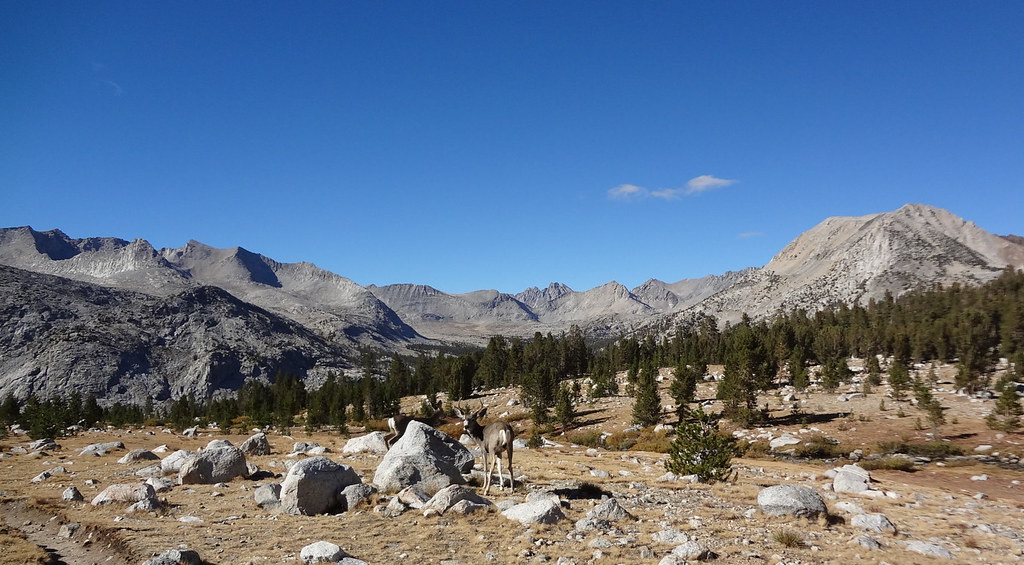 The Bench Lake trail stays in woods for 1.5 miles at the end passing the draining pools and creek from Bench Lake, looked to be prime mosquito habitat earlier in the season. Got set up in time to catch the alpineglow over the lake, and from the peaks to the east, especially Cardinal and Striped Mt. 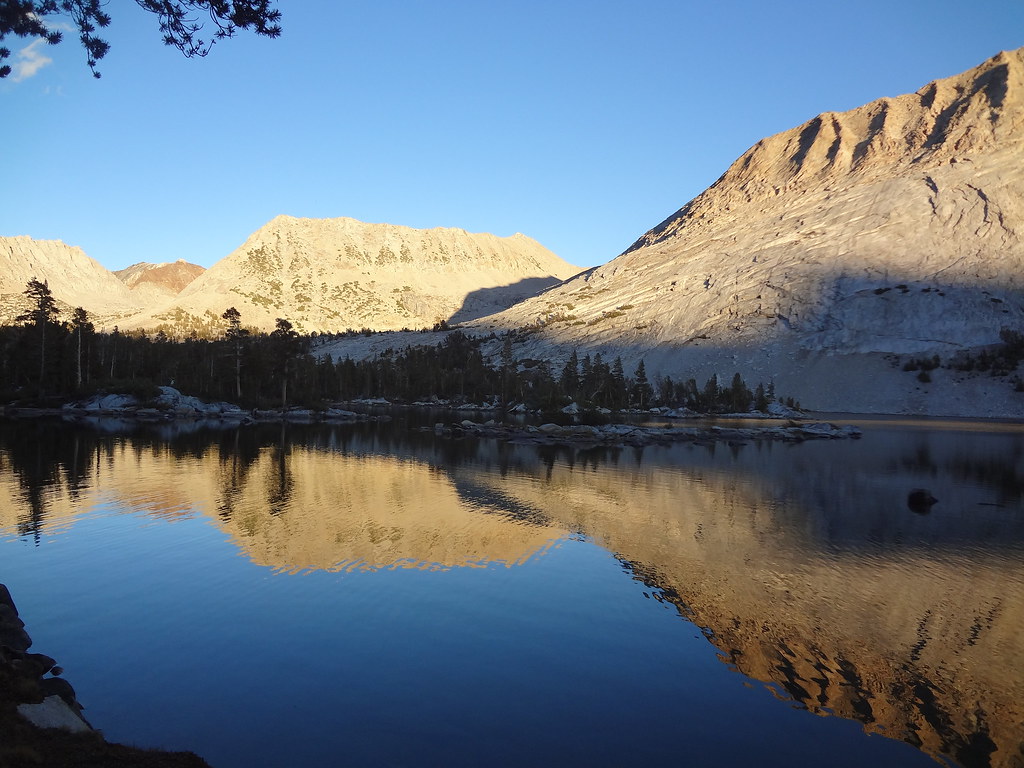 It was a calm evening, and I anticipated a chilly night, so bundled up and crawled in about 8:30, just after the stars were bright enough to pick out Polaris. In contrast to the night before, I was restless this night, and the tent was uncomfortably warm, there was no ice Saturday morning.
Again up at dawn, planned to catch the sunrise over the lake. Did get to the shore in time to see the sun moving down Arrow, but there was enough breeze to ruffle the lake's surface. 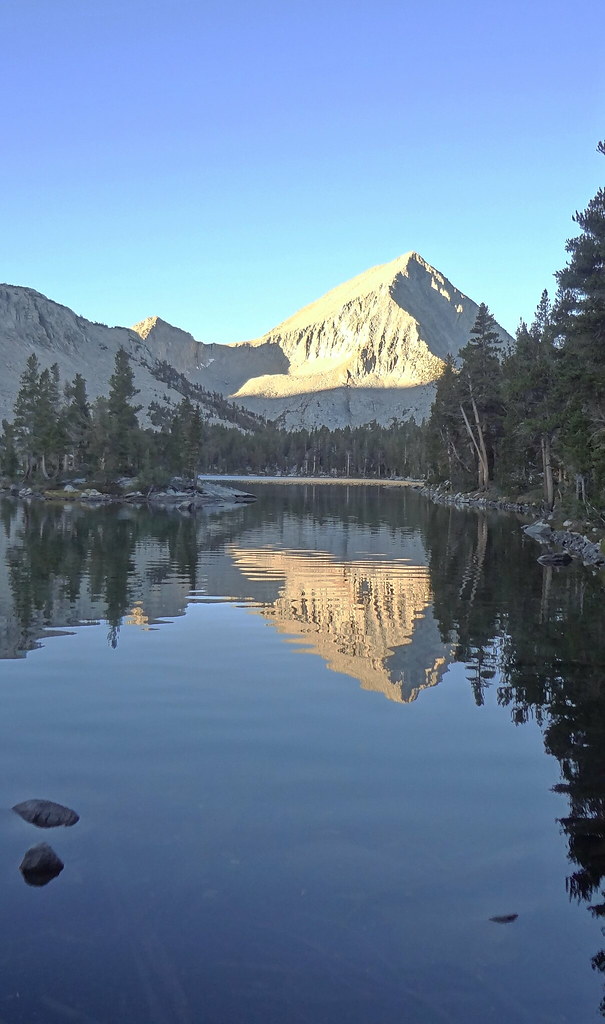 Still a fine view, but i was more intrigued by the sight across the canyon to the north. The Glacial Cirque with the basin below Cartridge Pass was visible, plus west along the ridge. As an old fan of the Marion Peak quadrangle I was delighted with this my first view.

A little slow packing up, so got hiking just before 9:00. Just missed meeting 2 women on the JMT at the junction. but made good time back to the pass. Just before the pass met a group of four young people, and asked their destination. I was a bit astonished when they replied Bridgeport, and more so when they said no not the JMT-TYT but the SHR. I said I hoped they got there before it snowed. Crossed the pass about 11:00. good but limited view to the east, at least 3 mountain ranges , and shortly after met a fast solo hiker who had started from the trailhead that morning. A warmer day than Friday, and the switchbacks seemed steeper, and underfooting more rocky than going up for some reason. Approaching the upper bench below a section of talus switchbacks, met a group of four, at least two of whom were into their seventies. They had spent their first night at one of the campsites, and were heading to Bench Lake. We compared Taboose to other tough passes, most of them had made multiple trips over the terrible 3 or 4, and Taboose did not rate as the worst.
Took a little lunch beside the creek above the waterfalls as the going was not as fast as I expected from the day before. I was moving more deliberately, and didn't reach the first campsite until nearly 3:00. Shortly beyond the campsite there is a small sidestream crossing, and I was dunking my kerchief, when I looked up and a bear was scampering away down the trail. It was not a large bear, perhaps a juvenile, I only got a short glimpse of its backside. Just to be on the safe side I loudly announced my presence to any other bears that might be present, and then continued to the first crossing. Managed the crossing, and was again out in the sun and switchbacking and traversing down the canyon side. The day was much calmer than Thursday, and I could hear the stream, rather than the wind. Reached the trailhead just before 5:00, just as another packer was about to head in. My feet had had it by then, managed to burst a blister pulling off my boot, and my knees are a little sore the day after. Drove home over Tioga that night, playing high-beam, low-beam with a surprising amount of traffic.
P.S. Does anyone have an accurate distance for the trail? The National Geographic map shows the distance from trailhead to JMT junction as 9.7 miles. The Harrison map shows 8 miles from trailhead to the pass, and 4 more miles to the JMT junction. The park service sign at the junction shows 3 miles from the pass to the junction. 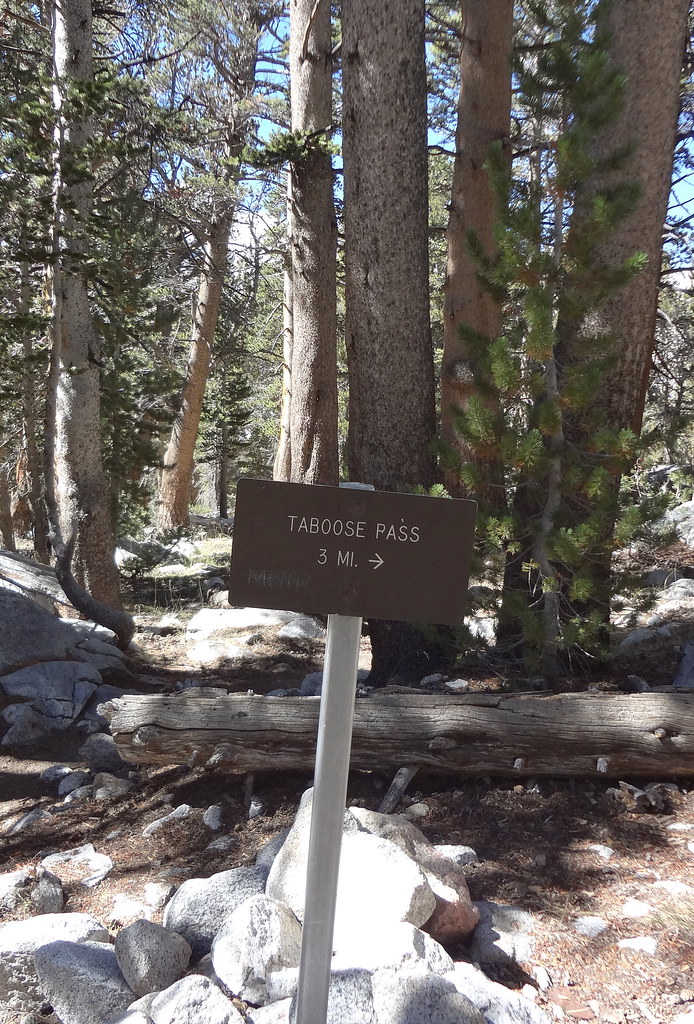 Just did a similar trip to you earlier in the month. Saw a ton of bear prints and scat, but no bears.

I believe mileage is something like:
7.4 Miles from Parking Lot to Pass;
4.1 Miles from Taboose Pass to Bench Lake.
Top

Thanks for the entertaining trip report that was enhanced by your style of writing and photo composition. I am a bit surprised that you ran into so many folks.
Top

I am a bit surprised that you ran into so many folks.

Me too, especially this time of the year, most that I have seen is 3 on several trips over Taboose.
Professional Sierra Landscape Photographer

I took Jim and Mike there and they really enjoyed it. We caught a fish dinner every day.
You must be registered and logged in to view the files/photos attached to this post.
Top

Fish dinner
You must be registered and logged in to view the files/photos attached to this post.
Top

Thanks for the report! This is a great and classic area.
Top

Hey -
I am gonna do this hike in about 2 weeks and I am kinda worried. I keep hearing how tough it is.

I am a beginner hiker, and haven't hiked in over 20 years. I am 50years old, and a bit out of shape. I've been working on getting into shape for the past month.
I'm curious about a few things, and I would love some advice.

1. How tough is it really. We plan to take the pass in two days, to get into Bench Lake.
2. How 'in shape' do you feel someone needs to be able to do this hike? ( btw, the people I am going with are very very experienced).
3. Any advice on preventing altitude sickness?

Thanks a bunch!
Top