If you've been searching for the best source of information and stimulating discussion related to Spring/Summer/Fall backpacking, hiking and camping in the Sierra Nevada...look no further!
Post Reply
14 posts

I know this might be a reach, but a lot of you are very good at knowing a place by the description and sometimes poor picture angles, so I thought I'd give this a try. I lost my hard drive with the entire album so this is the only photo I have that is from the place, but I know it's not much, just trying.

Last year my mother came to visit from the East Coast, near the middle of October, and with Tioga Pass still open I decided to show her the 395 side as the Fall Colors were coming near an end, or at least not at their peak. It was my first time too so I was happy to see it.

I was looking for the June Lake Loop, which ended up being tough thanks to cellphone GPS being worthless. Eventually being the adventuring kind I just started driving down random roads I thought could lead to something or an area of Fall colors. I found a road that ended up having quite a few campgrounds on it.

I believe there was one on the right side of the road that sat more in possibly a meadow or at least more wooded area. And then about 1-3 miles above it there was another campground which sat on a lake (there might have been an additional one as well on the right side, but cannot remember if that's 100% accurate). This is the campground I'm attempting to find. While the picture doesn't show it, there was a mountain basically above the lake. The road continued up it, but I believe at that time of the season it was closed.

The campground is located behind of where I took the picture and to the left . The further right would lead you back to the main road.

The Campground from what I remember you made a left into, and after a quarter mile or so you were in the campground. I believe there might have been two loops, but only the first was open. Or maybe there's more, but only the first was accessible. When coming off 395 I want to say there was a 4-way stop about 100 yards or so, but this could be wrong.

All along the road leading to the campgrounds there appeared to be bristlecone pine trees.

I've looked on maps and google Earth and can't seem to figure out where it was. I do not believe it was on the June Lake Loop, but possibly just before or just after it. I stopped at Mammoth with her so it wouldn't be past that, but it was a ways before Mammoth as well.

If by all means this doesn't ring a bell to anyone, can you name off some campgrounds on that side that would be open the first week of October? I don't really want to drive all the way back up to Yosemite to a campground after shooting there all day. More remote the better, but that will have sites open of course. 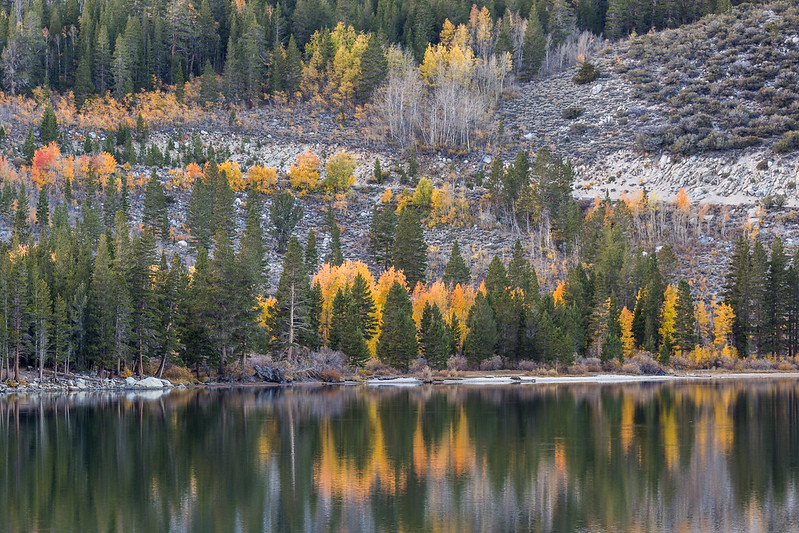 Um, how big was the lake?

If it was big, you found June lake, perhaps. The North campgrounds seem to fit your description, but the lake needed to be big to fit.
“Posterity! You will never know, how much it cost the present generation, to preserve your Freedom! I hope you will make a good use of it. If you do not, I shall repent in Heaven, that I ever took half the pains to preserve it.”

It wasn't very big. Obviously not small, but nothing on the scale of Tioga Lake or Tenaya Lake. I would say smaller than those. Maybe half their size? I don't believe it was June Lake being June Lake seems to have a resort and what not. This area was pretty deserted. I also looked at the road that leads to June Lake and couldn't see any campgrounds that were to the right of the road leading up to it.
Top

So you don't remember which road it branched off of? 395, or Tioga Road? There is a turnoff as you come down from Tioga Pass that takes one back through multiple campgrounds. I don't recall there being lakes -- they are along a creek.

Sorry, I was using the size of Tioga Lake and Tenaya as a way to scale. We definitely went towards Mammoth. After looking at all the maps it's clear it can basically only be two or three lakes. Perhaps it is June Lake, I just don't recall seeing any homes or anything, and they appear to be nearly all around the Lake, so it's extremely odd that I wouldn't recall passing some homes.

Gull Lake looks the closest to it, but again, there should be homes all around or that I should have passed. My guess is I just missed them or am having horrible memory loss.
Top

Unless you actually went all the way into Mammoth Lakes, the lake basin?
Top

Is there a picture of this? I tried googling, but it's showing a lot of images I've seen all day so don't want to mix that up with something else.
Top

Could it be Oh! Ridge campground at the end of June Lake, close to the main road?
Top

I figured it out. Decided to drive all the way over there on my day off yesterday. I'm a complete moron. I went way past Mammoth and June Lake.

The campground/lake I was looking for was Rock Creek near Toms Place. The more I drove on 395 the more it came back to me. Realized I went past the airport that first time and then it all came back to me.

Talk about some bad information. Thanks for the help though!
Top

Nothing beats a good paper map and knowing how to use it. Never runs out of power or reception!
Top
Post Reply
14 posts