If you've been searching for the best source of information and stimulating discussion related to Spring/Summer/Fall backpacking, hiking and camping in the Sierra Nevada...look no further!
Post Reply
18 posts

I've got a trip planned in a couple of week to Desolation where I plan to do a 2-night loop starting at the Bayview Trail Head heading up to Dicks Lake the first night. Second day we plan to summit Dicks Peak and maybe Jacks depending on how things progress. From there we will head over to the Velma lakes and spend the night before returning down Bayview to our car on Day 3. We definitely plan to check out Fontanilis and the falls that lead to Velma on day 2 as well.

This will be my first trip to this specific part of Desolation so I was hoping the group can give me some advice to make sure I'm getting the most out of my trip. The trip will be with my 17-year old nephew who is making a special trip out from Florida for this while on his west coast tour of colleges.

My questions are:
- Do you recommend kicking off from the Bayview trail or Eagle Falls?
- Is Dicks Lake the best spot to camp for the night and if so, any sides of the lake that will be less traveled since I imagine it might get good traffic being so close to the PCT?
- Is reaching Dicks peak doable this time of year without any snow equipment and is taking the Dicks pass route the most accessible for us as neither of us have any technical training?
-If we do add a Jacks peak, how is the path getting back to the PCT and to our packs (where ever we leave them)?
- On that note, I'll have a day pack, is it best to leave our main packs at our campsite from night 1 and then return to our pack or leave them off the trail somewhere when we climb the peaks?
- Any recommendations for setting up camp at Velma for night 2 between Upper, middle and Lower Velma? Same as everyone else, looking for amazing views and solitude.

Not sure if I need to provide my experience and background again as I've done that in an earlier post with questions.
Not either of our first trip but still in the early stages of gaining experience.

Thanks in advance for any guidance provided. I'll be sure to post a trip report and trail/mosquito conditions when I return.

Bayview Trail is less crowded, Eagle Falls far more scenic, but very crowded. Since you aren't camping along Eagle Falls Trail, I'd take it for the beauty.

Camping is to east side of Dick's Lake. Steep talus descends to water on west side if I remember correctly. Cascading stream from Fontinillis is pretty.

Area off trail around Middle Velma is more secluded for camping after mosquitos are gone, but it's a marshy mosquito haven until later in the season. I'd just set up a base camp at Dick's and stay both nights there.
Top

I spent a day up at Fontanilis and Dicks Lakes and thought aesthetics were modest and preferred being down below. During your visit there is certain to be a fair amount of snow on cirque walls above the lake as it is all north facing and steep with much vegetation still brown and dormant. The two Upper Velma Lakes have lots of ponds and marsh about with poor surrounding views. Generally the whole Eagle Creek basin given its glacially scoured bedrock nature has a lot of shallow ponds many of which in early season are not shown on the map. Thus lots of mosquitoes. Most groups camp at the north end of Upper Velma Lake along the trail or on the very popular south side of Middle Velma that is also along the trail and all those near trail areas look quite beat up. In early season those areas receive a lot of run off from the north facing slopes above thus is more squeetery. The west end of the lake is marshy with ponds.

The north and northeast sides of the lake are much drier. That side ironically is almost always vacant of groups even though the lake is considered one of the most visited in the range. Getting around to the north side requires getting past the outlet stream bays that are brushy that deters access. But if one ventures off trail well below the outlet before terrain drops to the lower lake, travel is open and easier. That zone also has nice unused gruss benches with picturesque Sierra junipers to camp about. The knee of the bench west of Lower Velma Lake has the nicest views down in the basin. One of the best views is from the dome just east of the lower lake and there are others in that virtually ignored eastern zone though one has to find ways through brushy sections.

The Eagle Falls trail as stated before is much more scenic so I would definitely recommend taking that. In terms of camping I would either camp at Dick's or Middle Velma. I personally think Middle Velma is prettier but it may be more swampy with mosquitoes. And if you plan on climbing from there it will make a for a much longer day of climbing.

The more important part about your questions involve the climbing of Dick's and Jacks. Under no snow conditions it is a fairly tame climb, but with snow it could be too steep to want to do without an ice ax. My mentality is and always will be on safer side so I would likely bring an ice ax. Getting to Jacks peak is a simple endeavor from Dicks. Basically just follow the ridge-line. It is a somewhat steep ridge in some spots and there is some Class 3 on it. Not sure if that's more than you want to climb and it's likely to have some snow on it. I would just climb Dick's and look at the ridge-line and see how you feel when you see it.
Never put off a backpacking trip for tomorrow, if you can do it today...
Alpine Mike-

Thanks for the responses. This is definitely an adjust on the fly trip such is life.

Regarding the recommendation of an ice axe. Seeing that I don't have one (or the two needed for both of us) if I was to purchase would you recommend an ice axe, microspikes or crampons. If I had the budget for one which would it be or are the spikes/crampons useless in those conditions without an ice axe. We will have trekking poles if that makes a difference.

I definitely want to be mindful of safety, not so much for myself but because my sister wouldn't be too fond of me if I didn't bring her son back in the same condition he left in.
Top

An ice ax is only as useful as your knowledge of how to use one to self-arrest. If you're not familiar with how to self-arrest which is the technique used to stop yourself if you fall on a snowy slope then it will be useless. But fortunately it's not difficult to learn how to do so and going out there you may find a usable not so steep slope with no dangerous run-out that you could use to practice on before climbing Dick's and Jacks. When it comes to Microspikes and crampons both of those would help if you were to encounter icy or hard packed snow conditions in which case the climbing would be much more risky if that were the case. I would much rather have an ice ax to stop myself than some crampons.

The conditions right now in almost that entire area are full on Spring snow conditions with fairly deep snow in many spots. I live in Tahoe so I see it melting and it is but there's just a lot of snow there. We'll see what this next week brings considering it'll be very warm.

I'm attaching three photos showing the slope up to Dick's and the ridge to Jacks.

Picture is worth a thousand words. Hoping conditions are closer to the first two photos and not the third. Or worse, a thawing/freezing icy mess...

As you mentioned, the weather is heating up pretty quickly to make up for the wet winter. If you don't mind, I'd like to check back with you on weather conditions with you being up in South Lake Tahoe as I get closer to the departure date. All the advice is really appreciated.
Top

You can go up Eagle Falls and down Bayview, then just send one person to go fetch the car by walking along the road while the other(s) wait.

There will definitely still be snow on the trail up from Dick's Lake to the pass, then probably along the ridge up to the summit as well. Here's a shot of Dick's Lake and Dick's Peak from the trail on June 21, 2014 (a much smaller snow year). 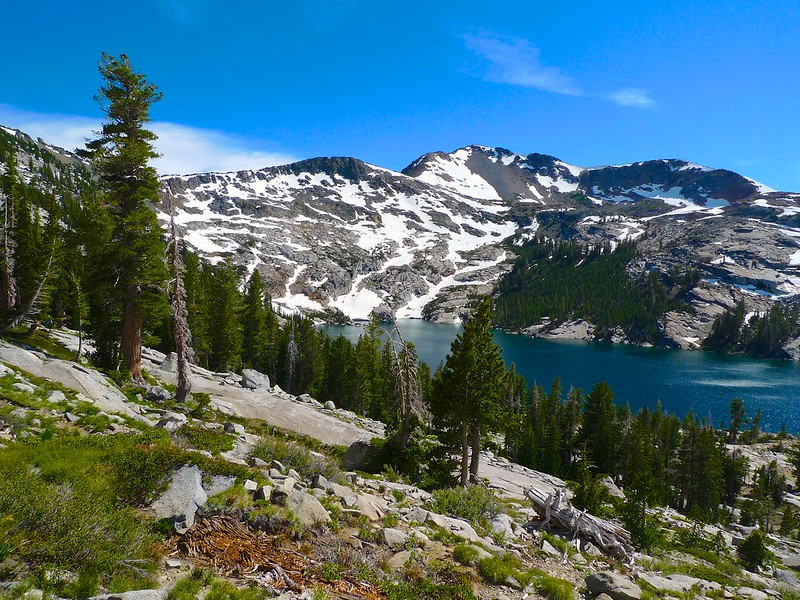 Dick's Lake and Dick's Peak by Maia Averett, on Flickr
oh hey! you're reading my signature.
that's nice. want to check out my blog?
here it is: plutoniclove.com
ig: @plutonic_love
Top

When do you think you'll be heading out for this adventure? I leave next Saturday for a week long trip. And then July 1st I leave for my major summer hike. Feel free to message me for a conditions report in between those times.
Never put off a backpacking trip for tomorrow, if you can do it today...
Alpine Mike-

Amazing pictures in your album from the trip maiathebee! I was thinking how much I would have liked those weather conditions until I saw the picture at Fontanilis regarding so many mosquitos. Maybe the colder weather will give me the opportunity to find some non-mosquito spots in trade off for the melting ice. One can hope!

Discretion is the better part of valor so I'll take the good advice and buy a pair of kahtoola microspikes and an ice axe times two for the team. I've seen enough videos of the proper way to self arrest which along with staying at a Holiday Inn express will make me an expert. We will definitely attempt to get some real life prep with the equipment in safe conditions when we get up there.

alpinemike, I'll be heading up 2 weeks from today (6/17). Sounds like you will be on your own adventure at that time. I'll message you and if you are around to report that would be great and if not then I'll provide you all a report when I return.
Top
Post Reply
18 posts