Topics related to peak bagging, rock climbing and bouldering in the foothills and high country of the Sierra Nevada. Be sure to also check out the Information Booth forum category to learn from / see if you can contribute to a profile for High Sierra 13'ers, 14'ers and cross country passes.
Post Reply
9 posts • Page 1 of 1


I'm planning a late August Mineral King loop along these lines: Franklin Pass - Big 5 Lakes - Little 5 Lakes - Spring Lake - Columbine Lake - Sawtooth Pass. It occurs to me that one possible way to get some off-trail miles and also work in the well-regarded trip down Lost Canyon would be to cross-country from Little Claire lake up to Amphitheater Lake, then shoot over the ridge between Sawtooth and Needham Mountain to Amphitheater lake or the Lost Canyon trail. The pass I have my eye at the center of this map: http://www.mappingsupport.com/p/gmap4.p ... &t=t2&z=16" onclick="window.open(this.href);return false;

However, I have my doubts about getting over this ridge. While it looks manageable (if only just) on the topo, I have personal experience with how tricky these ridges can be. I once tried to get from Monarch to Amphitheater only to find a massive vertical cliff on the East side of that pass. It's much worse than it looks on the topo.
So does anyone have any personal experience with this pass? A picture would also help. Thanks in advance!

Re: Pass between Ampitheater and Columbine Lake? (Mineral King)

Re: Pass between Ampitheater and Columbine Lake? (Mineral King)

Edit: Fixed the image so it displays

Some years back I had descended Sawtooth Peak via the south ridge. While looking north-east I snapped this incidental photo. I am pretty sure it's the area you're asking about. Pardon the rough markup I put on the photo, it should help provide a point of reference.

Of course the other side of the pass is still in question, but as you say it looks okay from the topo. 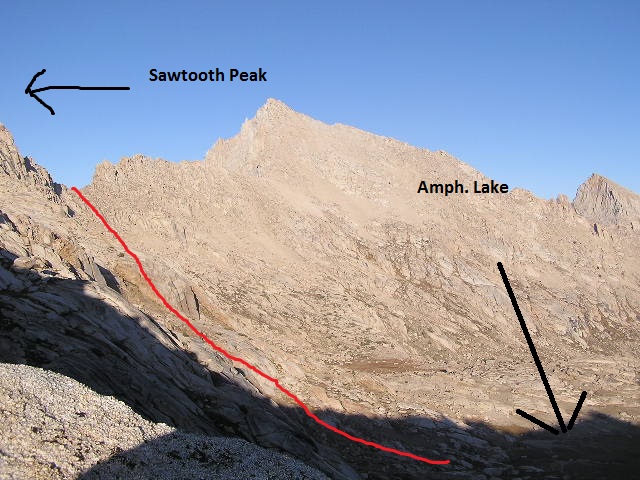 Thanks so much for the replies! As always, this forum is super helpful. I'm about 50% likely to try this saddle this Summer and will let you all know how it goes if I do.

This is almost a year later than your post, but maybe you haven't tried the route yet but still plan to. Based on a glance at your original post and its replies, we decided to give this pass a shot. We went from south to north on June 13, 2014. There was significant snow on the north side.

The pass can definitely be done, but in the direction we were going, it took careful scouting and route-finding to find a way down. There were maybe a few class 3 moves. We did it late in the afternoon, so the snow was soft, which was a good thing.

In descending, we hit steep smooth bluffs (clearly visible from below) and traversed way to our right, until we found snow chutes we could get down. I doubt this was the best route.

Welcome to HST! Thank you for supplying that additional info which may help
another HST member somewhere down the line.

Thanks for posting this information! I was the original poster of the question. I haven't yet made an attempt at the pass and probably won't do so this summer, but I think it's very likely for 2015. I would love more information if you've got it, and I'm sure others would too. I think it's great that you're putting this up here.

Topo.jpg
Shawn's photo in his earlier post shows the approach to the pass from the south pretty well. Hopefully as part of this post, you will see a topo showing our approximate route down to the north, and then a photo I took looking back up, with a red line marking our route.

We got up to the pass fairly easily. At first we descended easily, until we saw we had come to the edge of steep bluffs. I don't know if we made a good decision to turn right, but it looked the most promising route. We had to swing way right to find chutes we could descend. The route might look exposed, but it wasn't bad. The trickiest part was scouting and then getting down into the right chute, with maybe a few moves verging on class 3. Again, I doubt we picked the best route, but I think you would have to go north to south to find a better one.

On the topo, I marked a route in blue. We climbed Sawtooth the day before, and briefly scouted this other pass. A lot of it looked doable, but we couldn't see the whole route, and given the contour lines, went with the other pass. In retrospect, if you are trying to head over Sawtooth Pass instead of down Lost Canyon, I think this would be worth a more serious scouting.

Amphitheater Lake is a great destination -- lots of good campsites with panoramic views. We came over from Crystal Lake as marked (verging on class 3 getting down) and camped on the bench above the lake. Perhaps due to its topography, there was constant wind. There were lots of frogs in the nearby marsh, making a racket we could hear from a very long way off. We didn't see any other wildlife, including marmots.
You must be registered and logged in to view the files/photos attached to this post.
Top

36 DSC05724.JPG
Here is the photo mentioned.
You must be registered and logged in to view the files/photos attached to this post.
Top
Post Reply
9 posts • Page 1 of 1