Grab your bear can or camp chair, kick your feet up and chew the fat about anything Sierra Nevada related that doesn't quite fit in any of the other forums. Within reason, (and the HST rules and guidelines) this is also an anything goes forum. Tell stories, discuss wilderness issues, music, or whatever else the High Sierra stirs up in your mind.
Post Reply
154 posts

Well skibum... you're not the only "slow learner" here! I just figured out how to do the "avatar" thing!!

But I finally figured it out! Oh, these small technical victories... ya gotta love them!!

I fixed your photo...

On half dome last july, came from the tuolumne meadows side.

Markskor
You must be registered and logged in to view the files/photos attached to this post.
Mountainman who swims with trout
Top

OK, since Mark posted his, I figure I should follow suit.
gilmoremack2L300.jpg
Too bad it is not a giant brookie in the photo (it is a giant char however).

The photo was taken August 26, 2000 at Gilmore Lake in Desolation Wilderness. The mackinaw is 32.5 inches long.

Also, I figure there should be a somewhat more current photo--I need to find something recent in the backcountry (they are rare because I'm usually taking the photos). The next photo was taken in Greece in September 2008 on a geologic field trip.
petromoho1printLow.jpg
This is mildly relevant to a hiking forum, given that this was taken after an "informal" race up this mountain to this particular outcrop, which is an exposure of what represents the contact between oceanic crust and mantle. The USA representative (most participants were European geologists) won this one. 2nd place went to a Scotsman. There were plenty of participants younger than the two of us, too. That hat, for beer enthusiasts out there, is a Pliny the Elder hat.
You must be registered and logged in to view the files/photos attached to this post.
Since my fishing (etc.) website is still down, you can be distracted by geology stuff at: http://www.fresnostate.edu/csm/ees/facu ... ayshi.html" onclick="window.open(this.href);return false;
Top

Damn Giantbrookie! that mack is huge!!
Here's a pic of a well fed alpers trout that I caught a couple years ago. My mom and I had fish to eat for 3 days thanks to this beauty

Not exactly in the Sierra but about as happy; summer 2007: ) She invented the backpacking margarita. Here she is chilling at Amphitheature Lake after an awful day descending a hanging valley full of mosquitos and crashing through the burn (was it 2003 or 2005?) crossing the JMT and up the creek to Amphitheature Lake: 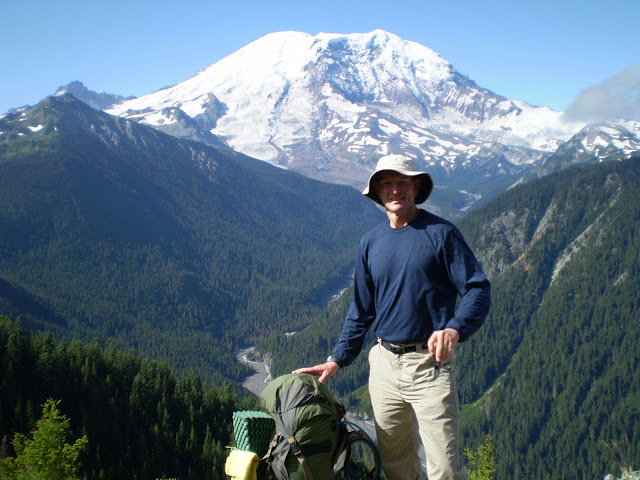 Since posting photos has gotten so simple even I can do it. Here you go. 6,000 feet of Downhill from here on the last day of this summer's Sierra Trip.
taboose pass.JPG
Mike
You must be registered and logged in to view the files/photos attached to this post.
Mike

Who can't do everything he used to and what he can do takes a hell of a lot longer!
Top
Post Reply
154 posts

Users browsing this forum: No registered users and 6 guests