If you've been searching for the best source of information and stimulating discussion related to Spring/Summer/Fall backpacking, hiking and camping in the Sierra Nevada...look no further!
Post Reply
5 posts • Page 1 of 1

This Sunday I decided I had to get up into the mountains, and took advantage of an invitation to work on the Hite Cove trail with a group of local volunteers. For those of you who don't know, Hite Cove Trail runs along the South Fork of the Merced from Savage's Trading Post up to Hite Cove itself, where there are some relics of the gold mining era, and then continues as a rough route all the way up to Wawona.

Savage's by the way, has an interesting role in the history of Yosemite. It was originally a trading post owned by Mr. Savage, who enjoyed a relatively comfortable relationship with the local native Americans. Then things got ugly, he got killed, they got attacked and confined....well, it wasn't the best part of our local California history. But it was important. 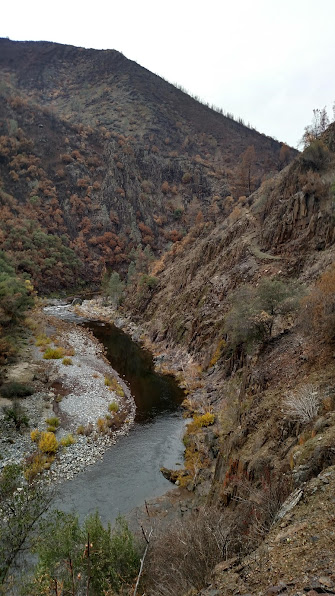 The Hite Cove trail is most popular during the spring, when the wildflowers can be simply stunning. But this time of year, it has a very different character, particularly after the huge Ferguson Fire raced through this area. The hope is that the fire will open the door to a particularly large wildflower explosion this spring, and we'd like the trail in good condition when that happens.

At the same time, the fire opened up the tree cover so that there are more views along the canyon, and the geology in particular is more apparent. 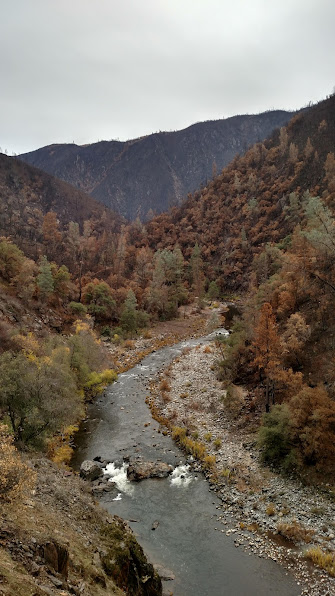 As has always been the case, I really enjoyed meeting the trail volunteers and working with them. They have a deep appreciation for the whole region and lots of stories to tell about their own experiences as well as those of others who've hiked here. It was a good day, and we got a lot done on the trail.

Here's one more photo, of what the poppies can look like in the springtime along the Hite Cove Trail: 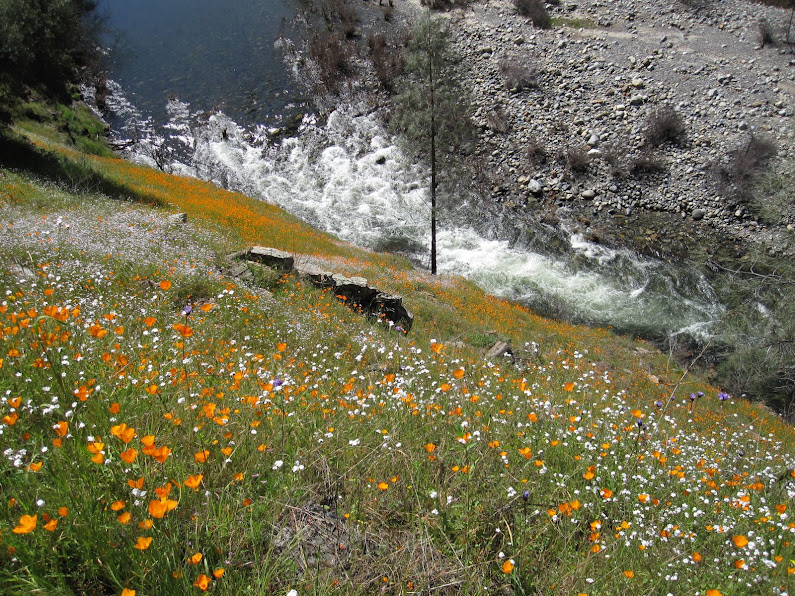 Here's the link to all the photos:

Thanks for doing the good work, and for the nice photo doc. If you were working on that sketchily perched trail in the first photo, we're glad you didn't slide into the drink! It looks unstable; what is the likelihood of mudslides in the burnt out zone? All the best.
Top

Certainly there is a concern about slides---that's some of what we were addressing on the trail. But that section you see in the photo is pretty darn stable...
Balzaccom

After last month's work day on the Hite Cove Trail, I spent Friday joining some of that same work crew on the Savage Lundy Trail, which also gives access to the South Fork of the Merced River below Yosemite. It was a beautiful day, bright and sunny, and we were able get a lot of the fire debris off the trail for the first couple of miles. The trail is currently closed to all traffic, and the fire damage was pretty comprehensive in this area. 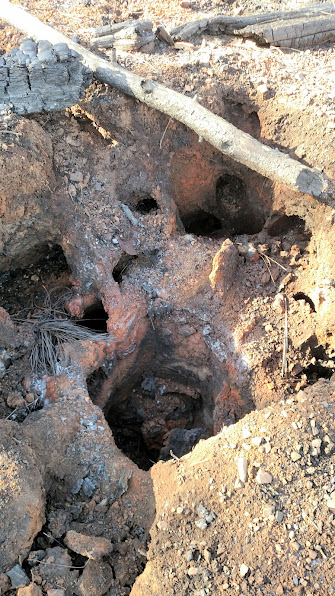 What was most impressive to me were the huge holes where large trees had not only burned to the ground, but also left myriad tunnels snaking underground where the roots burned up below the soil. Some of these were directly under the trail, and we had some fun filling them in to prevent future hikers from falling into the depths of hell...

Early the day some of the ground was frozen, so that added to the fun, as well. But we did get to see a part of the Merced that many people don't visit, and saw all kinds of refuse, some of it old enough to be classified as historic, along the now exposed trail. 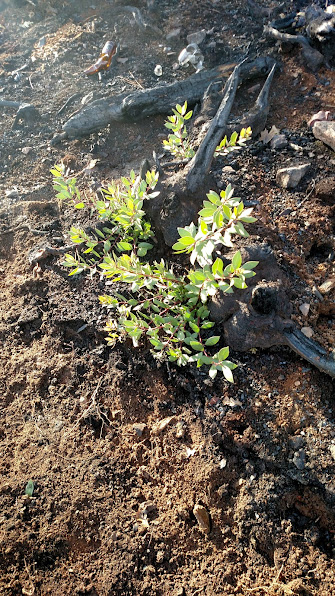 At the same time, it was nice to see a few shoots of green coming up out of the soil, often from the roots of manzanita bushes that had burnt totally down to the ground. Slowly the forest will come back..
Balzaccom

It was a great way to spend a couple of days near Yosemite. The volunteers out of Mariposa have been working on the trails in that area for a number of years. And Bill King, the man behind all this work, is a fountain of knowledge about the trails, artifacts, and history of the area. Every time I work on a trail crew with Bill, I learn more about the history of the early miners, and the Native Americans that were here before that.

This crew went into the Hite Cove area to try and repair some of the trail that was so badly damaged between the massive fires and a flash flood that hit the following winter. The fires burnt off the vegetation, and the water from the flash flood eroded away huge gashes in the trail...and in the landscape.

But Bill and his friends have been working on this area for some time, and they have been making progress. The trail is still closed to the public, but as trail crew volunteers with hard hats, picks and shovels, we were allowed past those signs to get to work.

After the morning's hike into the camping area, we immediately began to burn off massive piles of slash that had been cut by previous crews. There was no end to this work, and even with four of us working hard, we didn't get it all done. As our five huge piles slowly burned down (thankfully, everything was dripping wet throughout the area, so fire danger was essentially nil!) Bill and I took off to tackle one of the erosion problems between our campsite and Hite Cove. We built the lower part of the rockwork necessary to cross the ravine, pulled a few buckbrush sprouts from the side of the trail, and got back to camp in time to eat an early dinner. Then the four of us stood around the last of the burn piles and told stories while we added more branches and slash to the fire.

It was a really damp night. All four of us, each with a different make and kind of tent, fought a huge amount of condensation by the early hours of the morning. We woke up wet. That was no fun.

But before the sun hit our campsite, we were further up the canyon. Dave and Marty finishing up the work Bill and I had started the afternoon before, while Bill and I tackled the next stretch of erosion damage. Mid-morning, we took a brief break to explore Hite Cove itself, working our way around the massively eroded gorge there that had demolished the trail. that's a project for another day, and another crew.

By late morning we were back at camp to eat lunch. And while we were there the sun finally hit the bottom of the canyon and our camp. Each of us took our turn hanging our sleeping bags and gear out in the sun to dry it out.

We started another burn pile upriver from the camp, and that kept us busy until mid-afternoon. At that point I took my leave, heading back to the trailhead and Le Vin Blanc. I had a meeting the next day I could not miss. And I left Bill, Marty, and Dave planning that afternoon's work, probably up by the eroded gorge.

It was hard work. It was a great group of guys, and we made a real difference in the conditions on the trail. And I can hardly wait for the next one of these.

The photos are here; https://photos.app.goo.gl/XVkYZ2b5QokjSQur6
Balzaccom