Circle of Solitude in early July in a low snow year

Circle of Solitude in early July in a low snow year

I'm planning a Circle of Solitude variation with my wife for early July, and was wondering if anyone has experience traveling through the area, on trail and/or XC, at that time during a relatively low snow year.

We are experienced backpackers and intermediate rock climbers, and we have backpacked cross-country a handful of times. The variation I've mapped out will give us the opportunity to at least partially scramble up some of the nearby peaks to scope out future peak-bagging (or actually attempt them, weather/time/confidence permitting). There are decent trip reports online for both XC sections and we have 8 days for the whole thing, which, if we make no attempts at any peaks, gives us about a day of buffer (or more). I've planned the trip to alternate between hard and easy days throughout.

Caltopo map of this plan: https://caltopo.com/m/7AML

It was a mediocre snow year, so I'm hopeful that we won't get stymied by too much snow in the first week of July even above 10,000ft. (We're going to bring poles and microspikes regardless). I had originally envisioned doing this in September, but we have some friends who are doing the JMT late June, so it might be nice to try to rendezvous with them before their last push to Whitney.

1) Should we be concerned about XC travel to the Sphinx/Brewer drainages, and then back down to Cloud Canyon, in early July?
2) The north side of Harrison Pass dry would be well within our comfort zone, but similarly, should we be prepared to backtrack to the JMT and take Forester if it's still melting?
3) Will stream crossings still be hairy by early July? (Particularly Bubbs Creek by East Lake, Kern River as we approach the JMT from Colby Pass, etc)
4) Should we invest in ice-axes or more serious crampons?

5) We're crossing our fingers we can score Bubbs Creek permits on the Saturday before July 4th, by getting to the ranger station a few hours before it opens. Only 5 walk-up permits are available but it's just the two of us. We had no issues getting walkup permits for counterclockwise Rae Lakes Loop at noon on a random July Wednesday a few years ago, but weekend + July 4th has me a little concerned.

Appreciate your patience with a first-time poster, HST has been super useful for trip planning for me for the last five years, as an unregistered lurker

First, you should get a hard fact answer from rangers about WHEN first come permits first become available. I recall once where you could get a first come permit at 11AM the DAY before. I arrived early the day, and first-come permits were gone. I had to wait until 11AM for the same day "no-shows".

All the way on Day 1 to Sphinx Lake is ambitious. You have to drive down the day before anyway, so think about going up to Sphinx Creek on Bubbs trail to camp the day you drive. They will not give a permit after a certain time (around 2-3PM) you need to call about this.

I came up from Roaring Fork via Brewer Creek to Big Brewer Lake last fall (I wrote a trip report). I am not sure my route is the same as the Circle of Solitude. I do recall you have to cross Brewer Creek. Last fall I walked on logs. An alternative route is to go over to South Guard Lake and drop down Cunningham Creek. The difficulty is about the same, both with really steep sections to get down to Roaring Fork. I thought Cunningham route was more scenic, but probably a bit harder. If you plan to climb Mt Brewer you can check out the pass between Brewer Basin and Cunningham.

I went up Harrison Pass years ago when it did not have snow. Honestly, it would have been easier with snow. Without snow it is horrible loose steep scree (definitely easier going down vs up). Depends on how comfortable you are on steep snow. There is no trail to the Reflection Lake trail. The old trail has been covered with brush and rockfall. Not bad, but slow going. Much longer over Forrester. I think Forrester is more scenic. Personally Lake South America is not much for me. If going over Harrison, the valley upstream from Casper Lake is very nice, as is the large lake south of Mt Jordan. If going over Forrester, a side trip to Wallace Lake or Wrights Lakes is better. From Wrights Lake basin you can go over Rockwell Pass to get back to the trail below Forrester.
Top

Roaring River not Roaring Fork! Going up and down Cunningham Creek is much easier than Brewer Creek ( if you go up n. side and find the old cow trail on Cunningham Creek). Also I would consider staying high from Brewer Lake taking cinder col, down cunningham aways, up and over Thunder Ridge (nasty talus near the top on the Cunningham side, ask Rogue about it) then if time is short or just a neat route in itself go over Macloed Pass or a little s of there thru the first notch n of table mountain and down to Casper lake. If not that route then head down to Talus Pass (well named from the top of the pass past Talus Lake) then work your way down about even with Colby lake before traversing sse to Colby lake. Also after Colby Pass if that is the route you choose consider just dropping down the first 1000 feet or so on the trail then heading NE into Milestone Bowl and over Milestone Pass before dropping into Milestone Basin and the upper Kern. Whatever route you take provides spectacular views and great adventure! Don't feel tied to whatever is considered the "official" Circle of Solitude.
Mike

Thanks for all the very useful beta... Circle of Solitude trip reports tend to mention long boring stretches, like avalanche pass and the area by Gallats lake, so these options should provide better scenery in addition to more demanding routefinding. Adventure and solitude whooooo

It currently looks like SEKI allows permits to be reserved at 1pm the day before, but we won't be able to arrive that early. I may end up calling the rangers before they close to see if the next-day permits for Bubbs Creek have already been snapped up, and if it's looking bad, opt for Kearsarge Pass instead, and bump one of the days to accommodate the change. (Kearsarge has many more walk up permits available each day than Bubbs Creek/Roads End, from what I can tell).

Hopefully I'll see some trip reports online from that area, or nearby, as June progresses, to get a better sense of how quickly everything is melting. I think sticking with spikes and poles, and using good judgment to re-route if we hit steep snow, is the best call for now. As usual, better to get practice with snow/mountaineering gear on shorter trips before dragging them along on something like this. (We've walked a decent amount of low/medium steep snow in our shoes and spikes, just never crampons/axes).

Has anyone ever encountered a lot of people at Lake South America? I'm thinking some of the nearby lakes you guys mentioned might be good backups if we want some solitude in those days just after July 4th.
Top

Circle of Solitude trip reports tend to mention long boring stretches, like avalanche pass and the area by Gallats lake,

IMO there is nothing boring about Gallats Lake/Meadow, go at the right time it is quite enchanting. Milestone Bowl is pretty cool too, and then you have access to Milestone Pass on the ridge, which gives you access into Milestone Basin.

I just came back from a cross-country trip starting/ending at Road's end. The walk-in permit for next day can be claimed at 1pm and they go really fast, especially for bubbs and woods creek. From what I can tell all snow below 10000ft has melted, and on the south side it's almost snow free under 12000ft.
Top

Good to know. Hmmm. Maybe trying our luck for Kearsarge walkup would be better? Or just suck it up and spend another vacation day to ensure getting a permit...

Thanks for the snow beta! Where did you explore, oddtiger?
Top

Horseshoe bend in the river near Gallats "Lake", which was really more of a series of small tarns. by Maia Averett, on Flickr 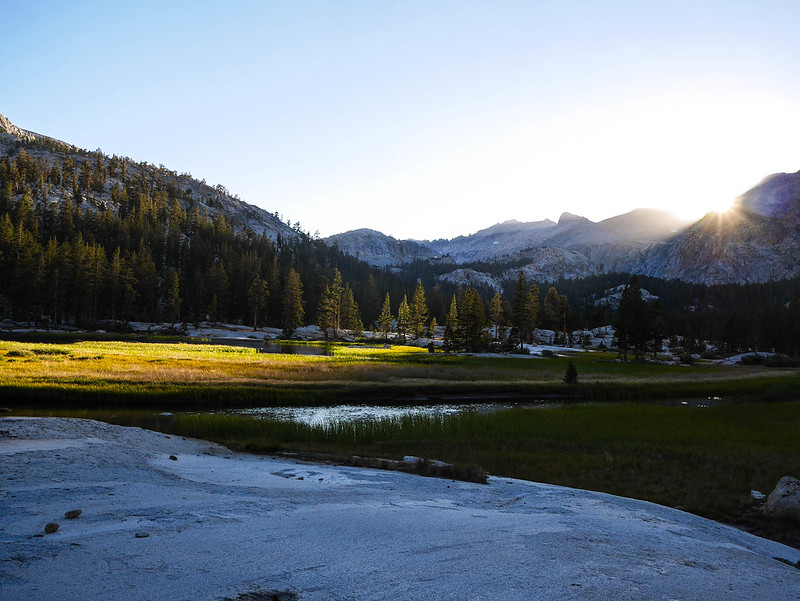 Sunset at Gallat meadow by Maia Averett, on Flickr
oh hey! you're reading my signature.
that's nice. want to check out my blog?
here it is: plutoniclove.com
ig: @plutonic_love
Top

Maiathebee, the picture of Galats you took is quite quintessential Sierra Nevada. In fact, the photo album is emblematic of the range! I thoroughly enjoyed all the pictures. It is truly one of the most spectacular routes in the Sierra Nevada.
Top

Maiathebee, I may have misinterpreted one of your notes in your Circle of Solitude blog post about Gallats... "swampy"... my bad :P now the challenge will be choosing whether to descend from Colby Pass past Gallats as we hike east, or swing northeast into Milestone Bowl and over Milestone pass to get into the Kern headwaters area. Might just choose Gallats for the simplicity of being on trail. Much gratitude for all the info and photos!
Top
Post Reply
17 posts