Grab your bear can or camp chair, kick your feet up and chew the fat about anything Sierra Nevada related that doesn't quite fit in any of the other forums. Within reason, (and the HST rules and guidelines) this is also an anything goes forum. Tell stories, discuss wilderness issues, music, or whatever else the High Sierra stirs up in your mind.
Post Reply
58 posts 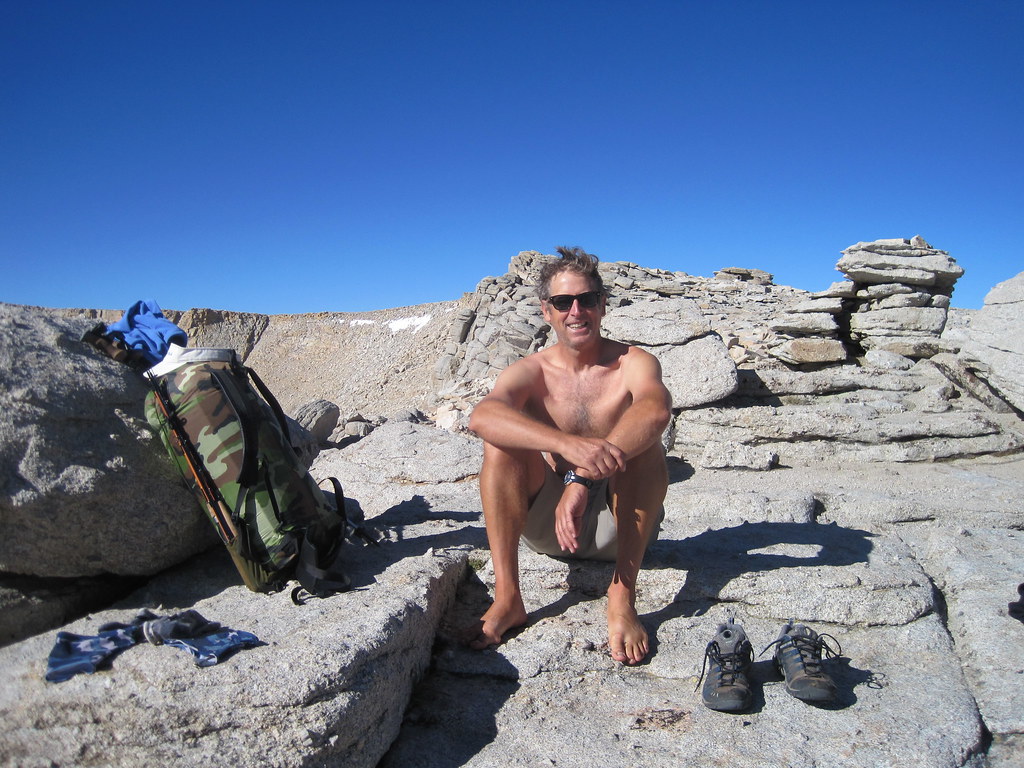 As you can see, it was a beautiful, gorgeous day. I was coming from a short trip to Miter/Crabtree, and only needed to hike the 6+ miles to my car @ Horseshoe. Since I was planning on spending the night in LP before driving back to SoCal the next morning, I really wasn't in any rush. So, I was hanging out enjoying the weather/view all by myself, when this group of 4 guys came up/over from the Cottonwood lakes below the pass.

They all looked MIC/LEO, but while they were unarmed, one guy actually was carrying, with his badge over the outside of the holster. Turns out he was a sheriff (not sure if Inyo). I peppered him with a bunch of questions, since I thought firearms were restricted in the NPs. According to him, it was A-OK as long as he was LEO.

Anyway, we hung out for awhile chatting - they naturally wanted some fishing information, so I gave them general advice. (Standard stuff about SBL, but no tipping off the surrounding lakes.) Before they took off down to Soldier, one of the guys offered to take the shot, so there it is.

PS I believe Jim still has that custom camo DIY pack. Might even have the syn quilt I was using at the time.
Top

I was selected for jury duty early last month. It was 4 counts of attempted murder with a firearm. Out of the 12 jurors and 6 alternates, 3 of us were NRA. (There's a questionnaire involving your opinion on many issues which you have to answer standing in open court.) While the judge continued to admonish everyone that the trial was not a referendum on the 2A, all evidence was circumstantial. That is, "he said she said" - the defense was claiming self defense.

So, after the initial shock of the charges wore off, we got a little more detail. Turns out the kid was 18, ran into some former HS bullies (they had all just graduated) at a park during Labor day weekend, and shots ended up being fired. The more the jury pool heard, the more skeptical everyone became. Sure enough, all 3 NRA are bounced by the DA - I was the very last one before the attorneys ran out of challenges.

Unfortunately for the DA, our replacements were no different. I walked out with two other dismissed jurors (non-NRA), both female. One immediately said she hated HS so much she didn't want to go. The other thought they were all probably drinking and the situation got out of control.

Anyway, I always remind people the 2A is all about hunting ... hunting tyrants, that is. It's the ultimate fail-safe if the 1A fails eg entrenched state refuses to seat elected government, etc. It is sort of amazing how education on this issue is so opaque. I was coming back from a surfing trip with my 19yo son and mentioned he was part of the 'unorganized militia'. He laughed like it was a ludicrous suggestion, but he was quiet when I sent him the links explicitly detailing how every able bodied male citizen in the USA 17-45 is part of the same group:

He got even quieter when I said he was automatically registered with the selective service upon reaching 18, and could be drafted at any time if the draft was ever re-instated. Once again, he scoffed at the thought; the stuff that these kids have failed to be informed about is astounding.
Top

I was "elected" to a jury for a guy who shot his cousin over a girl in 2009. Yes, there was a bloody glove involved, which I found amusing. The defense lawyer heard me chuckle and he asked "what are your expectations?" I responded, "I want to see the evidence." And I was in. He already knew the guy was guilty of murder. He got 27 years at least.

They even gave us the .22 that was used, which I demonstrated for the other jurors how it had to be fixed (old recoil spring) before he shot 5 times.
Top

Russ, I don't consider a mere mention of it on a site like this is advertising in any way, shape or form. When I was young and an avid diver, I refused to put any kind of sticker on my car, especially diving related. When your vehicle is parked at a dive location, it suggests there may be extra goodies in the vehicle with the owner possibly being away for an hour or so. I have an HST patch, but it's in the center console of my truck. I have a sticker from Talon Grips that says "Stick to your guns". It's on my dresser. I just don't advertise things like this to the "general" public. I don't wear shirts with advertisements because why should I give them free marketing?
“Posterity! You will never know, how much it cost the present generation, to preserve your Freedom! I hope you will make a good use of it. If you do not, I shall repent in Heaven, that I ever took half the pains to preserve it.”

Hobbes,
That Camo pack is sitting in my bedroom next to the quilt. I use it to pack when I go to Lisa's house and it doubles as a day pack.
“Posterity! You will never know, how much it cost the present generation, to preserve your Freedom! I hope you will make a good use of it. If you do not, I shall repent in Heaven, that I ever took half the pains to preserve it.”

I remember the old days when dredging was still legal in California, and the miners all had some sort of weapon up on the dredge. Saw it all, from pistols to some very serious assault rifles....have a problem, up out of the water, grab the gun. Like some kind of wannabe SEALs with really big beards and beer. More paranoia and an intimidation statement than an actual need.
Top

Off topic a bit, but still in the "self defense" category. I have been told that carrying bear spray in Yosemite National Park is illegal. How can this be, if carrying a firearm is now legal (with proper permit)? I carry bear spray in the Wind Rivers and it is not only legal, but recommended. And that was even before grizzlies migrated from Yellowstone NP. At any rate, bear spray is effective and much less weight than a firearm. Also curious if bear spray is legal anywhere in the Sierra.
Top

No Grizzlies in California, so no need for bear spray at all. And while it is legal to carry a firearm in the National Parks, it is illegal to discharge it. So enjoy carrying that extra weight around with you....
Balzaccom