Grab your bear can or camp chair, kick your feet up and chew the fat about anything Sierra Nevada related that doesn't quite fit in any of the other forums. Within reason, (and the HST rules and guidelines) this is also an anything goes forum. Tell stories, discuss wilderness issues, music, or whatever else the High Sierra stirs up in your mind.
Post Reply
88 posts

Bitchin' photos you all.

Wow! So many bodacious responses! I'm a little relieved to see that I'm not the only geezer on this board... but, 'old' is the 'new young', right?

I found another lost photo from back in the day. This one really made my wife laugh. (We didn't meet until the nineties when I was clean cut, clean shaven and a little heavier.)

GordonCloudsRest.jpg
You must be registered and logged in to view the files/photos attached to this post.
-gordon
http://www.highsierrami.com" onclick="window.open(this.href);return false;
Top

Me too HC 395!!!! And while its really not all that surprising, I find it amusing that so many of us where in similar locations near the same time.

Vandman, I think we may have met briefly back in June of 77

as I too was in the area. I'm actually being serious, because of the pic of your buds van. I think you guys gave me, my brother Jim, my friend Glen, and our Samoyed dog Fuzzy a ride from Shaver to Fresno (included Fuzzy as we were pretty unremarkable and easily forgotten, but how many backpacking samoyeds does one see

). It could be a coincidence, but damn if that van doesnt look like the one we got a ride in and damn if whoever it was didnt give us a PBR beer and I think you had Guiness as well !!! Could be mistaken, but I'm kinda doubting it!!!

We had hiked out of Bear Creek and came down to find our car wouldnt start. We tried all measures to get it going, but they all failed. We decided to hitch rides back to our place in So Cal and come back with my car with parts and a new battery to repair it. We ended up renting a tow hitch a pulling it back. It was still a great adventure!!!

Talk about a different snow year. 77 was a drought year and we camped at Three Isand Lake on 6/23 (my birthday) at about 10,500'. I recall only a few small snow drifts along the way.
Once in a while you can get shown the light
In the strangest places if you look at it right.

Troutdog,
It could very well be that my friend Mitch and I gave you guys a ride back in 1977. We always picked up hitchhiking backpackers , and although I don't remember you and your group, the fact that you mention Guiness stout AND PBR makes it a most probable yes, because that was our signature combo and we were very generous with our beverages!

Here's a vintage Kodachrome taken in 1976, the summer i spent about 55 days in the Sierra. It was taken on the trail between Simpson Meadow and Tehipite Valley. It was the best Summer for a 17 year old!
Van Tehipite trail 1976 72.jpg
You must be registered and logged in to view the files/photos attached to this post.
http://wildernessjournals.tumblr.com" onclick="window.open(this.href);return false;
http://vanmiller.tumblr.com" onclick="window.open(this.href);return false;
Top

Vandman & Troutdog::: now that's a cool "we've crossed paths before" story. What makes me smile is the "bitchin'" and "bodacious" terms. Ah, the terms of our youth. My kids think they originated and own their coolness. Little do they know that their parents paved the way.
“Posterity! You will never know, how much it cost the present generation, to preserve your Freedom! I hope you will make a good use of it. If you do not, I shall repent in Heaven, that I ever took half the pains to preserve it.”

Okay. I'll Bite. First photo is of the family at the Cathedral Lakes trailhead in the late 1960's. That's me on the far left. Second one is from the JMT near Devil's Postpile in 1973. Me on the far right. 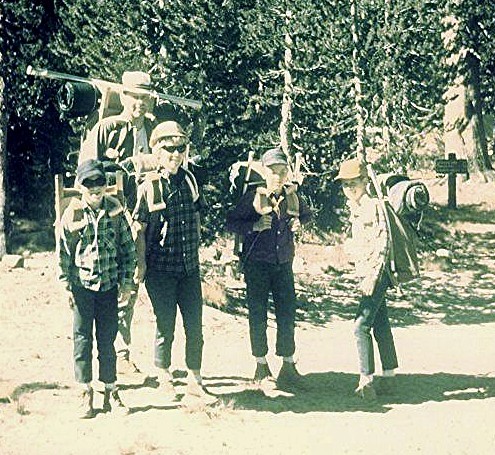 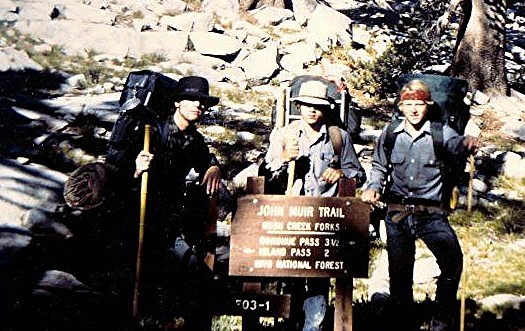 You boys are definitely ready for high water

“Posterity! You will never know, how much it cost the present generation, to preserve your Freedom! I hope you will make a good use of it. If you do not, I shall repent in Heaven, that I ever took half the pains to preserve it.”

Hey we had to look good out on the trail didn't we!!!

I looked the same way at that age. Parents couldn't keep me in fitting jeans, hence I had alot of cutoffs.

“Posterity! You will never know, how much it cost the present generation, to preserve your Freedom! I hope you will make a good use of it. If you do not, I shall repent in Heaven, that I ever took half the pains to preserve it.”