Grab your bear can or camp chair, kick your feet up and chew the fat about anything Sierra Nevada related that doesn't quite fit in any of the other forums. Within reason, (and the HST rules and guidelines) this is also an anything goes forum. Tell stories, discuss wilderness issues, music, or whatever else the High Sierra stirs up in your mind.
Post Reply
12 posts

What make & model was your first, personal car, that you went on a backpacking trip to the Sierra? What type of stereo were you listening to music on while driving up, 8 track, cassette, CD, or MP3?

Mine was a Ford Escort and cassette player.

Did go with dad in his Karmann Ghia in the mid 60's, it had an 8 track player, can still remember him playing Tom Jones while heading up to Yosemite!

Have a safer backcountry experience by using the HST ReConn Form 2.0, named after Larry Conn, a HST member: http://reconn.org

64' chevy impala 4 door. We didn't have a cassette. We listened to an AM station playing Jews for Jesus. Went to Carson Pass.
Top

What ever that car is in the picture below. Maybe a 1963 Ford station Wagon? It was my friend's old family car. Just an AM radio, whatever we could tune in that had rock and roll. This was our first backpacking trip, 1967, the Summer of Love. Virginia Lakes out of Bridgeport to YV. We parked the car in the Valley and hitchhiked to the trailhead. This picture was taken after the trip, I believe in Turlock trying to get the car fixed. We were on our way to San Francisco to check out the hippie scene and Golden Gate Park and of course, we had no money or idea of what we were getting ourselves into. It was also the Ranch surf wagon that we would get onto the beach and drive to Cojo at low tide, then breakdown there too. 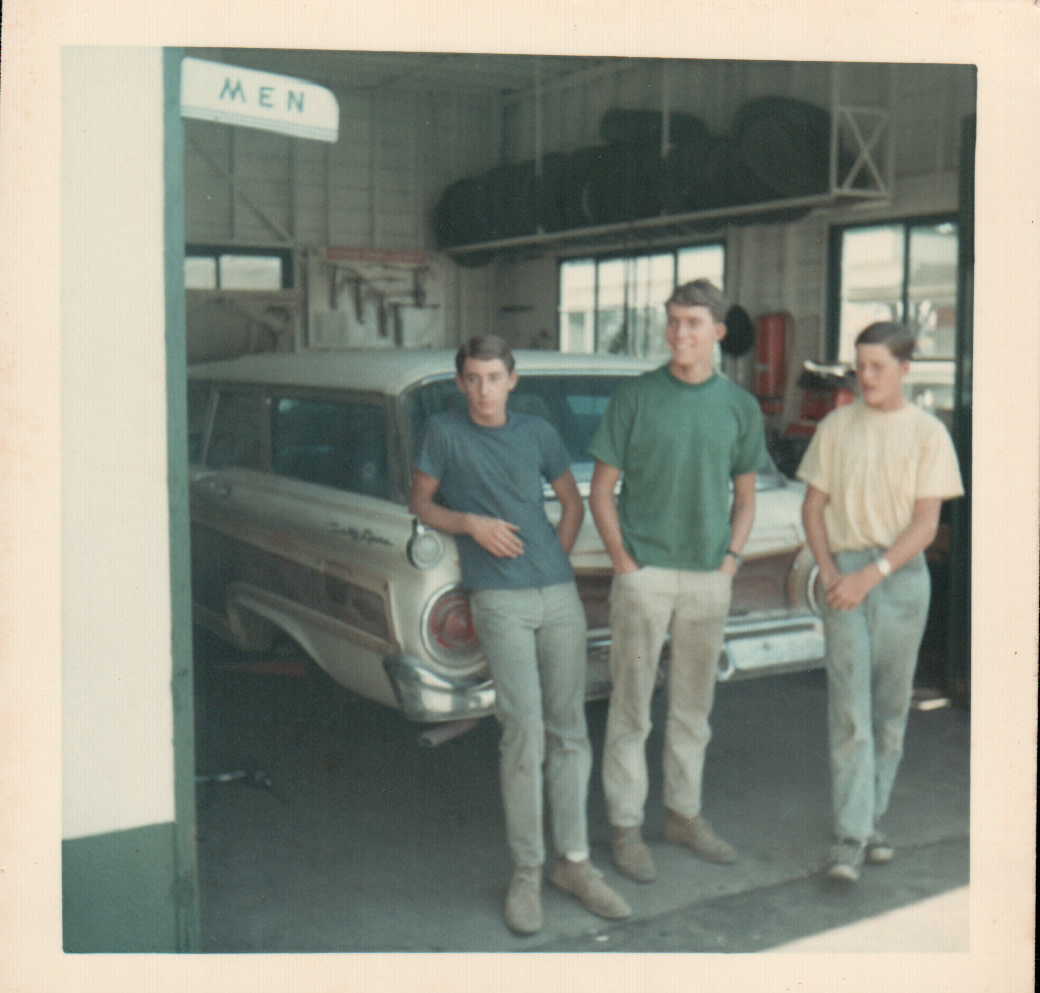 Nice car Freestone! My first car (didn't go bpacking in it) was a 60 Ford Falcon station wagon. I recognized the taillights right away.

My first trip was hitchhiking with a friend down from Marin back in the mid 70s. We got stuck for hours out in Livermore trying to get a ride from an on-ramp, sweating our butts off, then finally said screw this and walked down to the highway, thumbed it from there and got a ride immediately all the way to around Hetch Hetchy in the back of some guys pick up just as a CHP going the other way got on his PA and told us to get off the freeway. The guy with the truck didn't tell us he was going to a keg party, but that's what it was, and we were happy for it. We got really drunk, passed out, went into the Valley the next morning. Took us a couple extra days to get out of there, because that's where the girls were. Backpacked all over for a week after that. Got a ride back from some YOSAR guy back to Vallejo. Got there in the middle of the night. No rides, a little sketchy for a couple white boys, so I found a pay phone and begged my mom to come get us.

Nowhere near as cleancut as Freestone and his crew though.

1963 Chevy II. 1966 after my first year in college. Drove up to TM and hiked into Mattie and Virginia Lakes. Started out late with plan on spending the night at Glen Aulin--the HSC was not open yet but the bears were everywhere so we hike all the way out to TM. All the gas stations were closed on the way out of the park. So I coasted on all the downhills. Finally arrived at Polly's 22 mile house where we put a $1.00 worth of gas in the tank at the outrageous price of .27 per gallon. Most of the trip there was no radio reception and certainly no tape or cd. My companion on that trip was killed later that summer fighting a fire.
Mike

My wife and I drove our yellow 1972 VW Beetle to Yosemite Valley in October 1976 on the last weekend the old River campgrounds were open for the year. Since we left after work on Friday, we arrived in Yosemite Valley in the dark. I vividly recall crawling out of the tent the next morning, looking up, and seeing those cliffs shining in the day's first sunlight. Our first Sierra backpack was the following September when we took the Rafferty Creek Trail to Upper Fletcher Lake. It was so cold, the lake froze both nights. We took the long way back by Evelyn Lake through Lyell Canyon since we were young, energetic and enthralled seeing it all for the first time. We accumulated over 225,000 miles on that Beetle until we got rid of it in 1997.

The music was no doubt the original KSAN with Bonnie Simmons, Richard Gossett, Bob McClay, Norman Davis, etc. When we were out of range of KSAN, we had this cheap Sony portable cassette player with tapes we made from our vinyl of Beatles, Dylan, Who, Kinks, Springsteen, Traffic, the Band, etc.
http://laurencebrauer.com
Top

My first trip by myself was sometime in 97 or 98? I had a 1988 Honda accord with a tape player. The only music I listened to was a large collection of live phish bootleg tapes. I also stupidly didn't believe in a cameras because I just wanted "to live in the moment without technology weighing me down maaaaan"
Top

Oh what great memories although a little foggy. I turned 16 in 75 and one of my buddies had 1970 toyota hi-lux pickup. We took that thing everywhere! He had an 8 track and I remember wearing out Toys in the Attic and Rocks on trips to Tuolumne Meadows, Hetch Hetchy and Reds Meadow. I remember 6 of us packed in there for a trip once - he had a camper shell. My very first trip was a March Trip to Yosemite Valley in an old international. No cassette. It was all KSAN and KFOG until we were out of range. I told my buddy to slow down after we put chains on coming in from 120. It was a 4x4 and he was cocky so the first corner we went straight on a curve and wedged ourselves into a snowbank. A cabover camper with 10 drunk guys in it showed up and dug us out. We hiked the mist trail to Little Yosemite Valley. Yes it was closed and dangerous and we were idiots. We made it and came back on the JMT. We came back to the valley for a few days of camping and had 2 of our backpacks stolen out of our car. The ranger actually lent us gear for a couple nights. That was when I stopped going to the Valley. We also hiked to the top of Yosemite Falls during a full on rainstorm that turned to a blizzard up top. My buddies little brother got hypothermia. We were wearing all cotton and jeans. We had to start a fire to warm him up. It's amazing we survived our childhoods. Don't tell my parents. They always thought my trips were uneventful.
Top
Post Reply
12 posts