A short stroll in the Virginia Range

A forum that'll feed your need for exploring the limitless adventure possibilities found in "other" places. Post trip reports or ask questions about outdoor adventures beyond the Sierra Nevada here.
Post Reply
2 posts • Page 1 of 1

A short stroll in the Virginia Range

What is the Virginia Range, you ask? Well, broadly, it's the long ridge in Nevada to the east of Reno, north of Carson City, northwest of Fallon, and southwest of Fernley. My home also happens to be built on its lower slopes in Hidden Valley, and I can access the range by walking up my street and into the hills, which I often do while walking the dog. 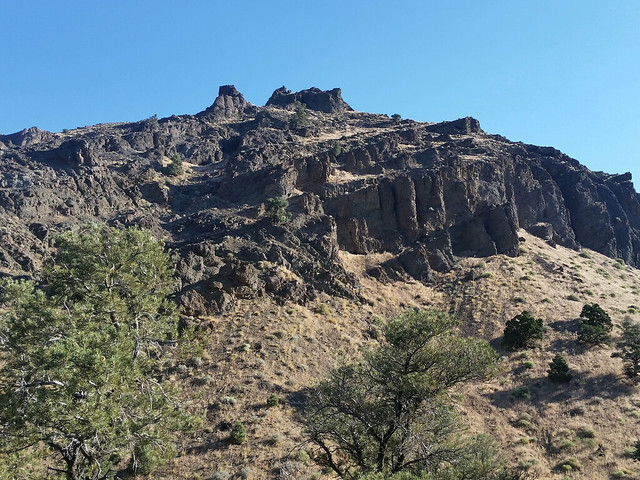 A few weeks ago I took my dog with me up into the slopes above our house. We were looking for a loop from the deep saddle you can see east of Reno, north to the high cliff above my neighborhood and back down. We started by walking to the end of Rough Rock Drive and starting up the canyon at the end of the street.

The street ends at a cul de sac at 4,740 feet, where a short jeep track continues past a gate. The dirt road quickly fades into a narrow trail that climbs up a deep canyon I call Rough Rock Canyon, after the street full of stucco homes (the canyon is not named on topo maps).

The trail isn't very good, it is used mostly by local dog-walkers like me. In fact, the only person we met during the hike was another old guy walking his dog. He told us the trail did indeed reach the saddle at the top of the canyon, and that it connected to the south with a track into the Hidden Valley Regional Park. That was nice, but on this day we wanted to fork north, to the lookout above my own neighborhood. He didn't know anything about that.

We continued up and I was somewhat surprised to find we were walking along the path of a small running stream, which was unexpected in these parched hills. But at least we now knew where the wild horses that roamed the hills got their water.

As we approached the saddle we looked back and saw the Reno metropolis framed between sandy slopes, with 8,269 foot Peavine Peak and the Carson Range beyond: 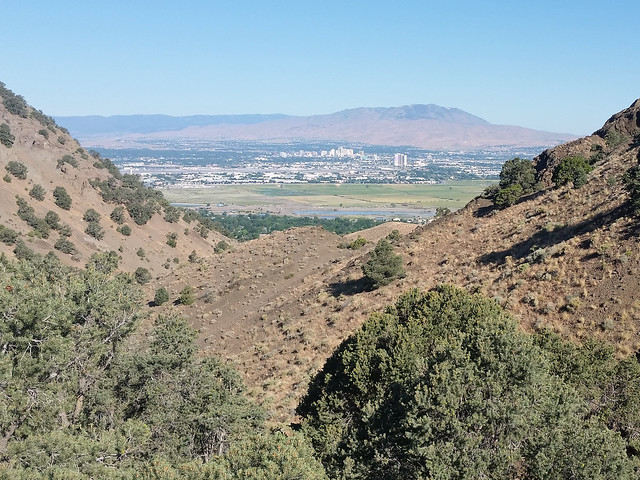 Finally, upon cresting the saddle, Storey County was laid out for us in a high desert panorama that reminded me of my childhood in rural Orange County, CA (which hasn't been rural for decades): 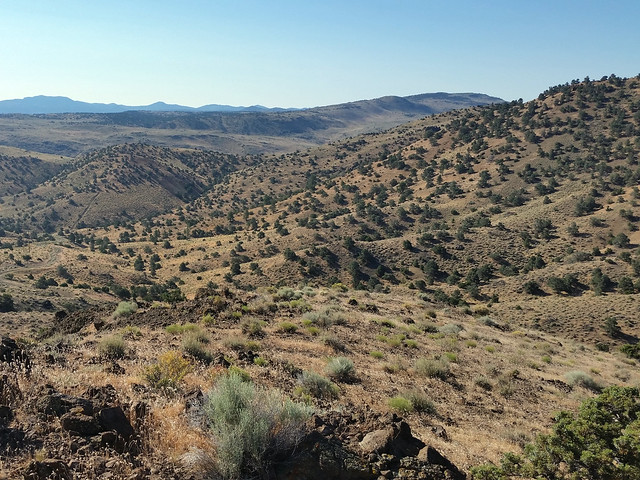 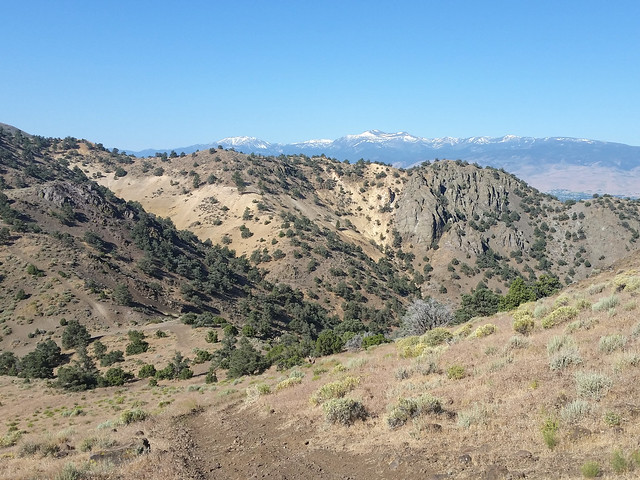 This is the mountain you see when you look north from almost anywhere along the shores of Lake Tahoe.

The hills up there were remarkably verdant, with far more vegetation that we are used to seeing in the Mojave Desert in Southern California. The largest plants were scraggly junipers and what I believe is a species of stunted fir, with dry grass thick upon the ground. Northern Nevada, I have learned, is far more flammable than Southern California, which surprises me. 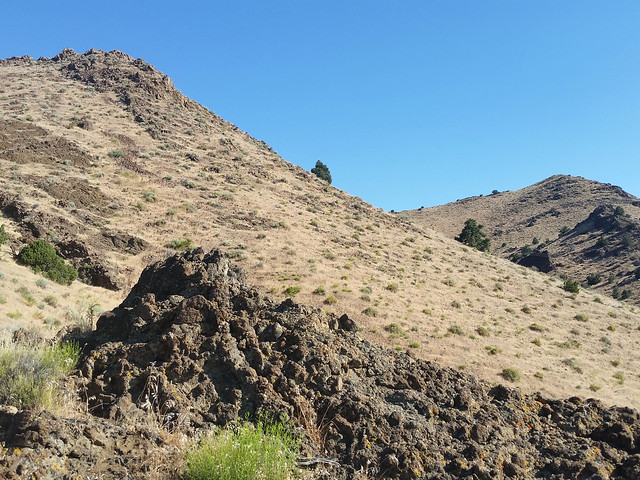 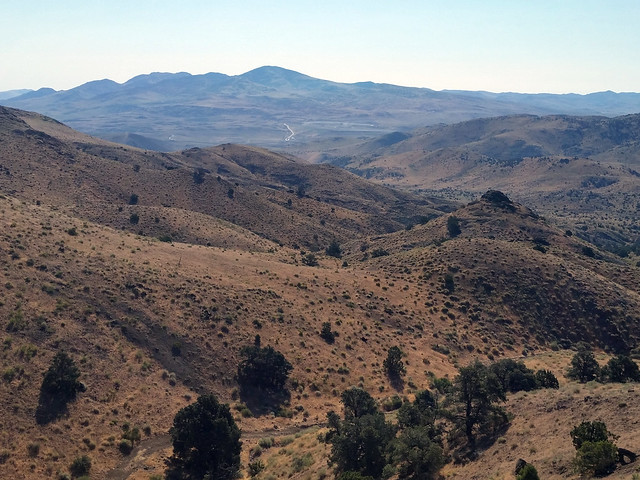 We found a small footpath heading to the north from the saddle, and followed it to a dirt utility access road that took us up to the high point of the ridge above our house. It was getting hot. We should have started an hour earlier than we did. 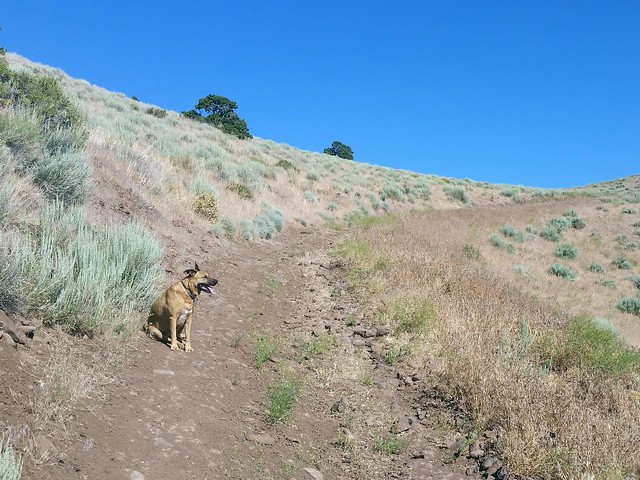 I brought water, of course, but it was my dog who drank most of it. 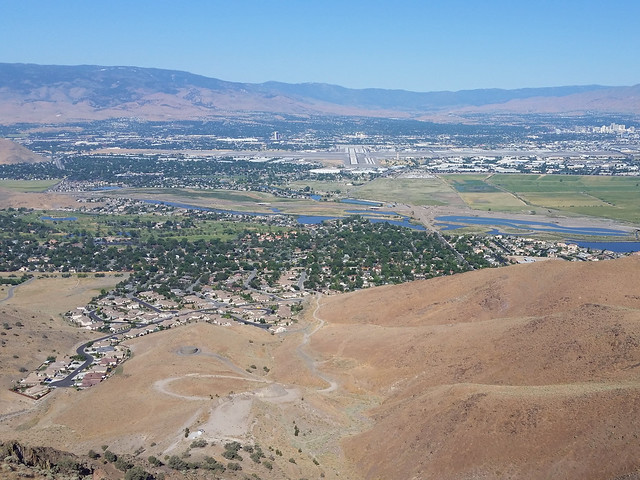 Our house is visible left of center, and of course downtown Reno is at upper right. The Reno-Tahoe Airport separates us from the rest of the city, and Steamboat Creek, a tributary of the Truckee, supplies a wetlands that thrusts Hidden Valley into the headlines every year there is excessive flooding (fortunately, our house is up in the hills).

The dirt road in foregound is an extension of a residential street a block over from ours, and I hoped it connected with the top of the ridge, but in fact there was no way down; we had to return the way we came. It was about a 2¼ mile hike to the ridge from our house and so it would be an easy 4½ miles round trip.

On the way back down the canyon, my dog took a few minutes to wallow like a pig in the mud below the spring: 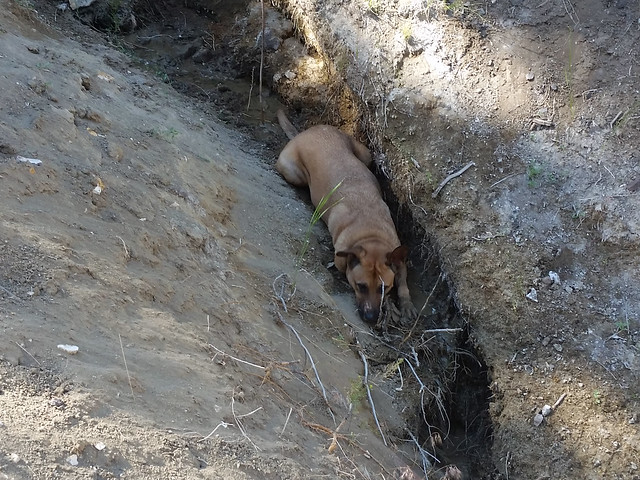 Hidden Valley Regional Park is just south of here, with miles of properly maintained trails, but for the moment we are more interested in checking out the paths less traveled. The east side and crest of the ridge can also be accessed by jeep track. I attempted this last weekend with my lifted 1998 Suburban, but didn't get very far: the road is so rocky I was afraid of getting my 7,500lb vehicle suck in some remote location. I think we'll trying hiking the jeep trails later. 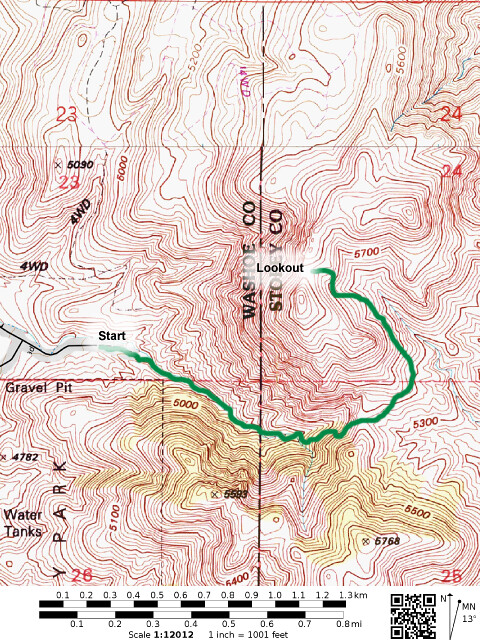 Re: A short stroll in the Virginia Range

That was fun to read! Sounds like a nice adventure to see some local stuff. Always fun hiking with dogs. Thanks for the report.
Top
Post Reply
2 posts • Page 1 of 1