by richlong8
Hobbes,thanks for the report. Looking forward to reading the rest. For me, I had already made 2 hikes up the canyon, and the talus slide was worse coming back down that night than going up, so I decided just to let it go until next year instead of heading back up. I was thinking ahead to the trip out which for all I knew I would be by myself, and I would have to allow extra time for, and I just did not want it bad enough to take the risk. Risk/Reward...A shame, I had looked forward all year to attending the Meetup, that was the reward, but I did not like the risk for me, but I did get to meet Dave, and enjoyed his company in the abortive attempt. Hats off to all who made the trip.

by Flamingo
Hey All,
I had a TERRIFIC time at the meetup. The overall group balance was really sweet. The highlight of my trip was staying up late with everyone on the shore of Bench Lake under the stars, cracking jokes and sharing stories.

I will post a full trip report soon, but in the meantime. . .
* I attached two group photos from my camera. I think Jim, Andy, and Mike also have different versions of the group photo on their cameras.
* Mav... I'm sorry you couldn't join this year, but THANK-YOU for organizing the event and helping select the Plan B location.
* Hobbes and Jeff... I had a great time hiking out with you over Taboose Pass. Good conversation really makes the miles pass quickly. Thanks for keeping cool, on a long hike that could have been miserable.

by Ashery
Man, I really need to work on a better sleeping arrangement when I'm out. After getting home and eating, but before even taking a shower, I just sprawled out on the floor and got a longer continuous sleep than the entire week I was out.

Guess I got really lucky when it came to that Taboose crossing: As stated earlier, I was able to rely on Hobbes and Flamingo for advice and a safety net on the way down, but I was also able to defer to more experienced folks on the way up. I only made it a mile or so up the trail on Saturday afternoon before giving up due to the heat, though it certainly felt like I had walked longer, and while breaking down my camp the next morning I was frequently hearing voices of two people coming up the trail. I ended up, quite literally, walking to the trail with my pack on my back right as the two people crossed in front of me. Those two people ended up being Alpinemike and his girlfriend. Not only that, but on the way back to the first crossing after having dropped my pack to backtrack and confer with Alpinemike, another pair had crossed on the way down, both of whom were also highly experienced. So, while I would've gone with the devil I know and taken the talus to bypass the crossings had I truly been solo, if there was a time and place to push myself out of my comfort zone, that was it.

And on the way out, I'd more say that I provided the physical comedy while Hobbes and Flamingo provided the conversation,

Would post more, but I'm going to go pass out again. Thanks to everyone involved and who participated in the fantastic meetup.

by Hobbes
Couple of informal shots taken Thursday afternoon (before our organized group photos the next morning): 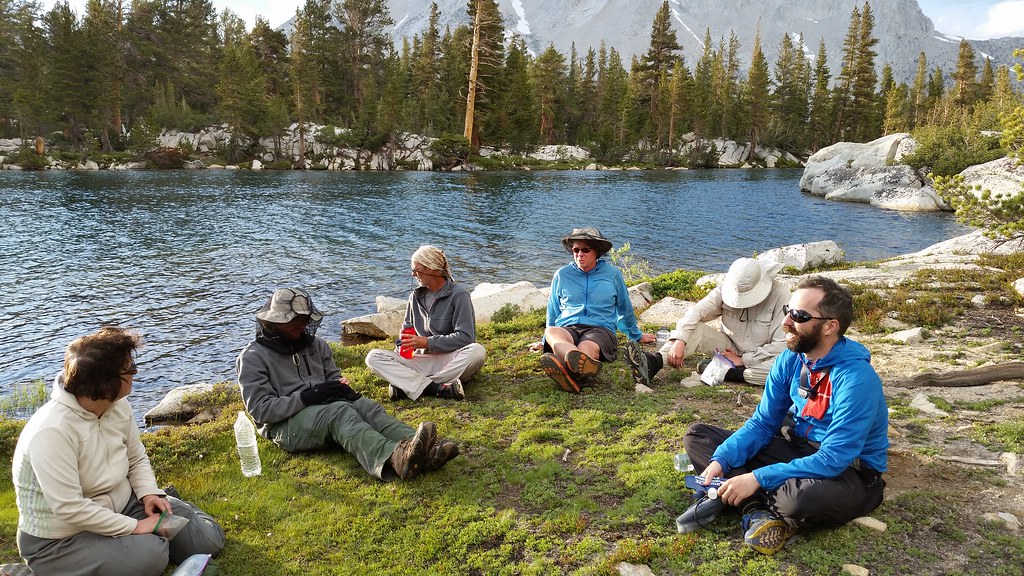 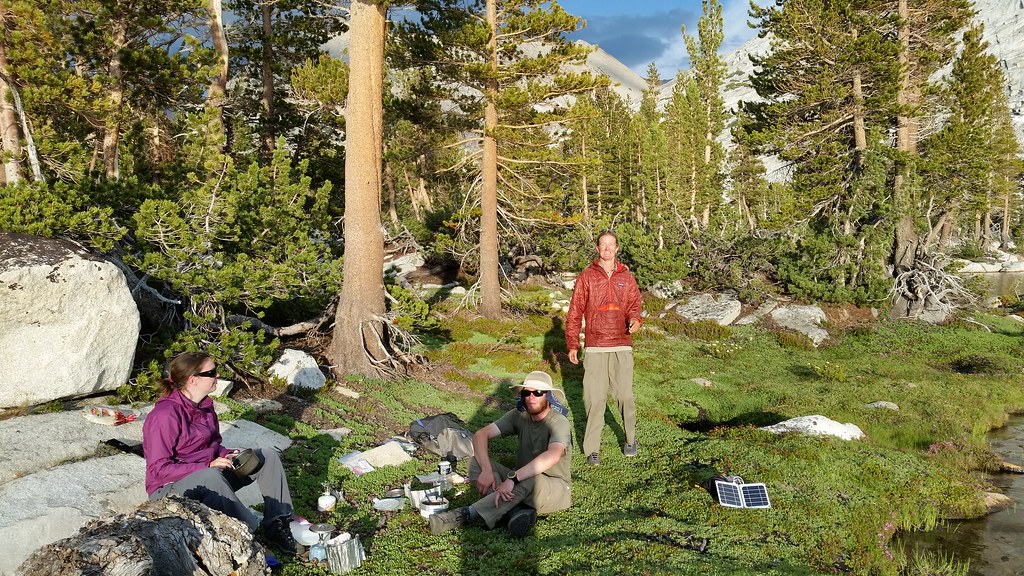 Later that night, we stayed up till 11pm without the assistance of alcohol, drugs or campfire; the conversation and energy levels were that high.

by Hobbes
Flamingo, you know that scene in The Graduate where the neighbor says one word, "plastics"?

Well, the name of the mineral I was searching for is "scheelite":

by freestone
Will there be a fishing report?

by Jimr
Caught lots of fish.

Too tired for a report right now, but one coming. Let's just say that the way out was an adventure.

by Jimr
I think that everyone who turned back at Taboose made a wise decision. It was brutal. I’ll put up a TR sometime this week. I’m still in recovery mode with end of month duties taking priority.

Our experience is as follows:

We started out from Bench Lake at 10am or so and made our way to Taboose Pass. This is the second time I’ve been down Taboose and I never want to go up it. To me, it’s a means to get in unlike Sawmill that impressed me thoroughly. Once at the pass, we took a break and photo ops, then headed down. It was very straight forward until the middle crossing. I was chatting with a man a bit younger than me while on our way up the pass. He and his boys did the creek crossing. He said it was an adventure, but doable. He said it was about 2.5 ft deep, but swift. I thought about this for awhile. Do we attempt it or go for the work around. I decided there was no way I was taking chances with my gals, so I didn’t even discuss it. Stick with the plan.

We hit the crossing of commitment and started into the talus. This section was straight forward talus hopping and fairly stable. That was the end of straight forward and the beginning of an “adventure”. We worked our way into a brushy section of deer brush (That’s basically what I call all of the bushwhack stuff) with willows at creek side. At first, it was patchy with remnants of old trail and footprints, quite a few footprints. Things were looking good, but got progressively worse. We ended up for about an hour from forever in heavy bushwhack territory. The sun was fading as we made our way slowly through the brush. My goal was to get us safely out of the traverse zone and back to trail before dark. We barely made it, but at least, we didn’t have to bivy in the bush. At one point, I ended up on my back, head down slope. It took me about 10 minutes to untangle myself and get my legs out of the tangle of branches so I could finally get back on my feet.

We kept working our way up, even though the talus slop was getting steeper. I wanted to get to the division between brush and talus so we had the best chance of some stability. The final push down slope through very loose talus to the trail crossing was tedious, but with the trail in full sight, we pushed on very carefully.

We hit the crossing and discussed whether to bivy and the tight little site above us or push on. We pushed on. It was now pitch dark, so with headlamps engaged, we proceeded until the trail dropped down to the creek. There was not supposed to be a crossing here. We were exhausted and seemingly at an impasse, so we sat down and ate and drank. I worked back up trail to see if what we were on was merely a stream access trail, but no dice. I then perused the situation across stream with my light and came to the conclusion that there was no way the trail crossed the stream and into the steeply sloped thickets on the other side. I searched the bank and noticed a very small work around by sliding between a small tree and up a few short feet back to trail. Once past that, we had a pleasant night desert walk to the trailhead. We hit the truck at midnight (The front of my truck is in one of Sir BC’s shots). I hit the truck to find a group sleeping right in front of my truck. I scared the crap out of them when I approached and woke them, but I needed their cooperation to get my truck out.

I believe this workaround would have been easier going up than down and easier going down if we had previously work up. We were constantly blinded to what lay ahead. The topo map showed very steep terrain up ahead and up high, but there was nothing but brush down in the lower section. We had to pick our path in bite size pieces.

We picked up the other vehicle at Sawmill and headed into Bishop where, after about eight motels with no vacancy, we finally found one on Line Street with rooms for us. It was roughly 2:00am at this time, so the ladies secured themselves in their rooms for a shower and bed, but I was hungry, so I went to Denny’s for the Lumberjack Grand Slam.

All in all, it was one of those type 2 adventures, but hey, we only did it for Instagram.

Jimr wrote: I was chatting with a man a bit younger than me while on our way up the pass. He and his boys did the creek crossing. He said it was an adventure, but doable.

It sounds like we passed the same group; I'm assuming you ran into them Sat around noon on your way up to Taboose from Bench? We passed them going up the E side around 2pm Fri about midway between the lower & upper crossing. There were 3 kids - maybe late teens - I was wondering if they were out there by themselves, thinking they might have been a little young. Then, around 40 yards further down the trail, we came across a guy in his 40s, to whom I then joked, "Ah, you must be the group leader".

We didn't bother to chat, nor pick up any intelligence. Both Victor & Jeff (along with Alpine Mike & Jeanine) had done both crossings on the way up days before, and after getting a look at the so-called north side "bypass", we were 100% committed to fording the lower crossing. We probably looked a bit determined, so he/they didn't bother to offer us any insight. Did they provide you with some input? They didn't seem too wigged when we passed by them. But then again, maybe they were just being dudes playing it cool.

I don't know if you saw this http://www.highsierratopix.com/communit ... =1&t=16435, but I wrote up some of my impressions of Sawmill & Woods. I know Oleander felt the same way about Woods, so I'd be interested in seeing/hearing your thoughts when you get a chance. Yeah, month-end, right?

by Jimr
Same ones.

Month end, yup. I'm dog tired, but it's my Son's birthday celebration, so I'm heading there tonight. Then, maybe, sleep.

We made a good decision to push on through the night. When we decided to skip the lakes S/W of the pass, we agreed to camp a couple of miles below the pass on the East side to get out earlier Sunday. Once there, we decided to push on out. Had we not, we would have been bushwhacking in 100F temps. The next day, Bishop was at 105F.
All times are UTC-07:00
Page 21 of 25
Powered by phpBB® Forum Software © phpBB Limited
https://www.phpbb.com/