by Wandering Daisy
Thanks for the good route map! I was wondering if, from the small lake, you could head directly to Picket Lakes. It looks like it is not as steep (on the map). Maybe some bushwhacking? Then from Picket Lakes, you could go up to the saddle below Middle Picket Lake and back to Island Lake. Any thoughts?

I read about the angled descent from the lowermost Picket Lake. It was not very clear to me exactly where you come out to the Kern-Keweah trail. At what elevation?

Another thought - what about going directly up to Red Spur. Cut up before the small lake. At least on Google Earth it looks possible, if somewhat miserable (steep shrub studded slope). Since I was going to day-hike to Red Spur anyway, it may be more efficient to simply head directly there, spend one night, and then drop to Island Lake.

I am not an ultra-light packer- and my pack at the point where I would go up the route from above Rockslide Lake to Island Lake would be about 27 pounds which is a quarter of my weight- enough that climbing 3rd class is a bit difficult for me.

Also, I am delaying my trip by a day to avoid the weekend storms so will not get to Island Lake until the 23 or 24th. Hope I do not miss everyone. I am inclined to give the route up from the Kern-Keweah a try- always can retreat and simply skip Keweah Basin and continue on my loop although it would be disappointing not to see everyone. Permit issues may also force my hand, so I may have to go in Lodge Pole or Mineral King instead. The Bubbs Creek permits are often all taken. I am driving down Sunday and just see which route I can get a permit for Sunday afternoon or Monday. Hopefully no problem, since these are days that are less popular for starting a trip.

Her descent follows the line of trees described here:

Our route would be a diagonal traverse upward to our left going down canyon on the slopes of Picket Guard Peak. The grade and terrain along the tree and rock studded route looked very manageable if we used a little prudent route finding. The way seemed obvious, leading up to a shoulder of the ridge above us and close to a lake [Hobbes: Picket lake] I saw on my map. From there it looked to be easy to get to Kaweah Basin via a col. 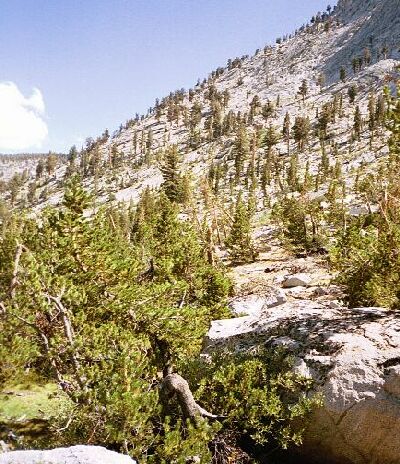 A rough line of trees can be seen going diagonally upward from right to left about mid picture. This was our route, and a fairly easy one at that. Oh it was work, but manageable work.

Both of their angles were aimed a micro-bit further north than Andy's route. Neither seem to consider it big deal. This is the same route Tom K descended after his hiking partner's shoe fell apart and they decided not to follow their ascent path back down the creek.

by Bluewater
Hobbes, it was possible to cross the Kern-Kaweah river before the waterfalls at 9,200-9,300 feet and it may have been a better way to go. I waited till the top of the waterfalls because there was a large granite slab that went directly to the river. There was a lot of brush at the bottom of the waterfalls and it may require some bushwhacking. There was a small amount of bushwhacking on the south side of the Kern-Kaweah, but I found some large ducks soon after getting out of the dense forested section.

Tom K told me about the specifics of the route, especially regarding crossing at 9,200 feet, crossing over the log jam at the outlet of the small tarn and climbing up the west side of the final waterfall before Island Lake.

Here is a photo with some detail of the location of the class III section circled in blue. It is short and although it looks steep it really isn't that bad.

by Bluewater
WD, I'm also leaving at least a day late to avoid the storms. It's been raining here all day so I put together some detailed photos of the route up from the Kern-Kaweah to Picket Lake. I was going downhill so I just followed the route of least residence. These photos are in the order going uphill.

Starting from the Kern-Kaweah looking up along the ridge toward Picket Lake:

1.JPG
Look for the large dead tree. The were some ducks and evidence of people using this route. It leads to a large gully.

5.JPG
6.JPG
7.JPG
At the top of the gully I followed an easy sloping mix of granite slabs and some trees etc.

8.JPG
Look for this large live tree/large dead tree. I crossed over between the two trees at about 10,080 feet.

After crossing through the two trees the more sloping large wide gully starts:

10.JPG
This old tree stump was a good marker from the other side for the place to cross at about 10,080 feet:

13.JPG
This is from the top of the gully looking down.

14.JPG
The red is my approximate route up to Picket Lake from the Kern-Kaweah River. Once at the lake there is a hidden but very nice plateau on the bluff just to the east of the lake with very good views of the sierra crest and back into Picket Basin. A small group had already claimed the spot on the lakefront, but it turned out to be just fine. There are a few medium sized flat places large enough for a few tents with trees and boulders providing wind breaks, and a built-in rock seat to look at the view at dinner time:).

The blue line is the route I think you may have been referring to as an alternate/less steep way to eventually reach Island Lake. I didn't explore that area but it looks nice (at least on the map). The creek that drains Picket Lake was a fast flowing narrow creek with steep walls on either side, but there was a log to cross at about where the red route line starts on the map. The area with the creeks and smaller lakes upstream in Picket Creek basin was beautiful! It was very buggy when I was there last July, but I remember wanting to get back.

kaweah basin xc route options.JPG
BTW, I'll be the guy with the HST patch on my pack. . .

by Wandering Daisy
Thanks!! The weather reports keep getting worse. A bit north of the to blue line you drew on the map (the main drainage), Google Earth shows an secondary gully that looks easier- less brush, less cliffs, and just one short part of steep large talus.

The route you showed with many photos (starting up above the standard route) is going to be my descent route. I may come in via Picket Guard Pass. If weather is questionable, then I would drop down the trail and also go up the tree-lined angled route. I am 95% sure I will be coming in from the west, preferably from Lodge Pole, if I can get a permit.

Tentative route:
Sunday (19th)- drive down
Monday (20th) - Buck Creek, Bearpaw or further maybe
Tue (21) Upper Nine Lakes Basin
Wed (22) Pants Pass to Kern Keweah - to Picket Guard Lake- or drop down the Kern Keweah if weather poor
Thurs (23) Keweah Basin - Island Lake
Fri (24) day hike to Red Spur and move to upper basin so I can get morning photos
Sat (25) back to Island Lake - down your route, and up to Mile 7 on Kern Keweah
Sun/Mon (26-27) Triple Divide Pass (if it looks OK) and Copper MIne Pass to Big Bird Lake; or just take the long route via trails and up Deadman Canyon.
Tue (28) over Tablelands to Emerald Lake or farther - do not think I can get out in time for shuttle back to my car so need to camp somewhere on the way out
Wed (29) out and home

The reverse route is actually better (I prefer to go down Pants Pass rather than up!), but not sure I want to go over Tablelands Tuesday if the weather is still poor. Also depends on permit availability. If Monday turns into solid rain forecast all day, then I will just hang out until Tuesday. At any rate, if I do not show up do not worry. Most may leave by the time I get there.

Hope to see you there!

Bluewater wrote: BTW, I'll be the guy with the HST patch on my pack. . .

BTW, this has to be one of the most graphically detailed trip route posts we've had on here. Good stuff.

by schmalz
I hope the members who went for the trip are enjoying themselves and the weather isn't too bad. I've been following conditions for the past few days and it looks wet up there.

by maverick
I am following Lisa (SPOT), they made it to Island Lake about 2 hrs ago, they had to go around the backside using the HST to access Kaweah Basin, instead of Pants Pass because of the weather, they are having sunny skies from here on, but highs are only in the upper 50's.
All times are UTC-07:00
Page 23 of 23
Powered by phpBB® Forum Software © phpBB Limited
https://www.phpbb.com/