by Hobbes
Rich, IMO Miter basin & Crabtree pass are one of the great Sierra hikes; if you've never been up that way, it may be worth the $ for a shuttle.

Shepherd is a great short-cut - albeit with a (physical) cost of entry/exit - that is becoming a go-to TH. But that's really only because I've been up & around the Army/Miter/Crabtree/Whitney zone enough times to start exploring other areas a little bit more.

For added impetus, here's a shot sent to me from last week in that area: 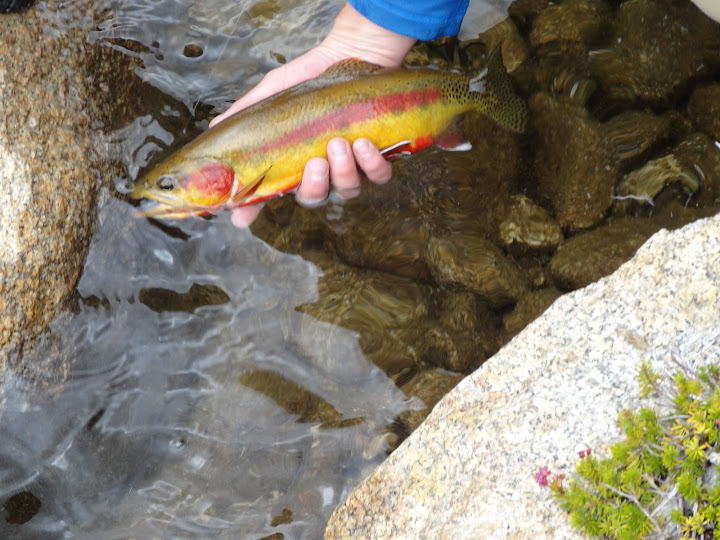 by richlong8
Either way, it will be a great trip. I have not done Shepherd Pass, and it is the only one of the east side monsters(Sawmill, Taboose, and Baxter) I have not done, so some day I want to do it.
If I can get off work Wednesday, the 15th, at noon, I can be to Lone Pine by 300pm, and pickup a permit, and hike part way up Shepherd in the shade, plus get started very early in the morning.
Otherwise, I will probably just come in Thursday morning, and stick with Horseshoe, Miter, Kaweah route. It's a shame that a person has to go thru the permitting zoo at Lone pine in the morning, which makes early morning starts impossible...and at Shepherd, that is a big deal. They should be willing to leave the permits in the drop box, even if your are going into SEKI. They could look on the computer, and if a person has a good number of permits that have been issued to him in the past, how many more times does he have to listen to the same talk from the rangers. Once they find out you have experience, they tend to rush thru it anyway, so they can keep the line moving.

by MN2CAPisco
Hopefully I'm not too late in throwing myself into the fray for this, but I just got my vacation approved and submitted for a permit from Wolverton on Wednesday the 22nd with the idea of shooting up to a summit on Big Kaweah en route to the basin via Kaweah Pass. That's obviously a lot of mileage, so optimistically the quickest I'd get there is Thursday night. I'm ready to push it though, especially if I get to meet some of you guys.

I'm also optimistically planning a X-country route on the return via PQC->Lion Rock->Copper Mine->Horn Col->Pterodactyl->Tablelands->Wolverton, but my exit date is Tuesday so that might prove to be too ambitious. If nothing else I could drop back to Tamarack and the HST I suppose, but I feel like that's a pretty amazing itinerary so here's hoping it all falls into place.

by oleander
Picket Creek Lake and Island Lake appear to be at the exact same altitude. Could one just follow the contour from one to the other? Or do you guys recommend going upstream and over the modest saddle?

Picket Creek Lake and Island Lake appear to be at the exact same altitude. Could one just follow the contour from one to the other? Or do you guys recommend going upstream and over the modest saddle?

Go over the saddle, the area between Island Lake and PCL is a maze of mini ups and downs, some places cliff out, though we are not talking about very high drop offs, but just enough to twart ones progress. There may have been an easier route, should have probably gone a little further west, but could not wait to take swim.

No of course not, looking forward to meeting you at Island Lake!

oleander wrote:Picket Creek Lake and Island Lake appear to be at the exact same altitude. Could one just follow the contour from one to the other? Or do you guys recommend going upstream and over the modest saddle?

Funny you should ask. I was just reviewing Tom K's trip report from 2011 where he describes ascending PIckett creek right next to the cataracts before spending the night at the first lake:

From what I can tell, they ascended directly to Island lake, but descended north-west of the (labeled) Pickett creek after heading over the shoulder Oleander mentions.

by oleander
Next question: Debating what would be the most fun way to get from Pants Pass down to Picket Lake.

It looks like I might have two whole days to get from Nine Lakes Basin to Picket Lake. So I don't have to go the *fastest* route.

There appear to be several saddles/passes between the Kern-Kaweah and Picket Creek basins. The two most well known are the saddle just NE of Lawson Peak; and Picket Guard Pass. It appears that a handful of people have considered or tried some of the low saddles in between the two, but I don't have much beta on those.

And yes, I've read what recent threads and older threads I can find here, including some debate on how hard Picket Guard Pass is, and an interesting route posted by WD that follows the strings of lakes down to the lake just NW of Picket Guard Peak, then turns up Picked Guard Pass.. But I am still undecided

by oleander
Sorry being so neurotic. Pre-trip jitters.

Mav PM'ed me to just pick one route and enjoy it. He is right, of course.

by Wandering Daisy
Don't feel bad, Oleander. I am going through some of the same agonizing choosing a route. "Pick and route and do it" is a very male type of thinking. My husband goes nuts when I present him with 10 variations to choose from! I am the same when I go shopping - have to "comparison shop" for every item, whereas my husband just takes the first thing off the shelf and deals with it.

My comments on your route, is that personally, I would rather go UP Pyra Queen and DOWN the southwest side of Pants Pass. And I think your plan for going from the upper Keweah Basin all the way to Hamilton Lake in one day may be a bit much. Pyra Queen Pass is very slow with all the rock hopping, particularly around Lk 11682. It is also quite tricky route finding to get down to Nine Lakes Basin. With light packs at the end of the trip it is certainly do-able, but personally, my old knees would take a beating! About 10 years ago I went from upper Keweah Basin over Pyra Queen, traversed to Lion Rock/Lion Lake passes and dropped to Cloud Canyon in one long day. I do not think I could do that now.

I too am curious about those other saddles that are accessed from the bench SE of the Kern-Keweah and Picket Creek.

My biggest question right now on my preliminary route is Table Mountain Ridge Pass. Rogue paints a grim picture of that pass! I read another account on climber.org and they made it sound less grim, but then climber.org always sandbags difficulty. I would appreciate any comments on this pass.
All times are UTC-07:00
Page 19 of 23
Powered by phpBB® Forum Software © phpBB Limited
https://www.phpbb.com/