Shepherd headwall snow field: on the way in we used ice axe and crampons as we crossed early am. on the way back (9-10am) you could likely get away with just an ice axe (the snow was soft by then that day) -- IMHO.

Bugs: barely annoying, although it was windy thru the Wrights basin, etc.

Creeks: all easy crossings (on a couple of occasions we used blow downs to cross). The only possible exception was Wrights where it comes into Wallace on the High Sierra Trail.

Snow level: patching 10K, more coverage 11.5K-12K (before storm). After storm Tyndall Creek area had 2" or so for example.

Lake at top of pass is still frozen, as was, LSA.

Oh ya, that storm that hit Sunday night.... HOLY COW! 8+ hrs of T-storm action w/ the last couple of hrs of Thunder snow. We were warned by the backcountry Ranger (Michael -- Thank you!). We wait until it was over to head back over the pass -- smart choice.

Went over New Army Pass on Sunday 6/12 and it was mostly snow free except for the last 50-100 feet where an ice ax and microspikes are necessary. The other side was fairly snow free.

Getting into Miter Basin was also mostly snow free. Admittedly I had a lot more snow to deal with because of the snowstorm on the 12.. It all melted the following day so at this point it's snow free again. Miter Basin itself is snow free to about 11,600 FT or so. Sky Blue lake was half frozen on the days I was there. Above that and toward Crabtree Pass it was definitely snow filled.

Due to a sprained ankle at Sky Blue Lake I decided to go out via Cottonwood Pass. The trail all the way there and down Cottonwood pass was snow free.

Creeks are high with lots and lots of water due to added snow and general run off.

Mosquitoes were not an issue really anywhere surprisingly but I also think it had something to do with the fact that it was cold and snowed quite a bit.
Never put off a backpacking trip for tomorrow, if you can do it today...
Alpine Mike-

The Tuolumne River was slightly above flood stage, so the approaches to the bridges near Glen Aulin were under water on one side, sometimes above the ankle depending on time of day. Delaney Creek was the deepest creek crossing, above ankle but under knees. The overflowing creek near Wildcat Point that floods the trail for 1/10 mile can largely be avoided by walking through the meadow close to the Tuolumne River, but you have to get over dozens of fallen trees to stay dry. The actual creek crossing is near the knees in some places, depending on the time of day, so choose wisely.

Gaylor Lakes near Tioga Pass was still frozen over except near the shore. Snow went solid in forested areas just over 9000 feet in some cases, and small patches of snow were around as low as 8000 feet. Exposed areas like Gaylor Lakes near 10000 feet still had large snow covered areas and the uncovered areas are very wet and boggy.
Top

Awesome. Thanks. Great beta on the lakes. Going up to South Lake/Bishop Cyn (upper lakes bp'ing later this week ought to be well on it's way with all this heat. Had to change TH 2x as I added another newbie the trip for permit availability purposes. I explained at length about MOZZIES. And did again that they maybe and w/b bad.....
Going to bring my Klymit LWD for it's maiden voyage to keep us all occupied. First time to the Sierra for both other than Winter boarding. Will post a tr. BTW b/c for long dysfunctional family reasons w/b the first time my 22 yo niece and 29yo nephew will meet!
Top

We were up there for trail crew - have to get the trails cleared for the season. Minimal snow on trails - patches of quick melting snow here and there between 8-9000 feet. We didn't get to Island thanks to being tied up with some gnarly blowdowns at Rock Lake. Word from other hikers was that there is a tree down on that trail.

The trails are in decent shape. However, don't jump the ribbon and go under the huge rotted pine we had to leave for next time -- we were unable to finish cross-cutting the thing, but it might go any time. Easy to walk WAY around it. (We'll be back to take care of it soon.)

The road is clear of fallen trees from Rock Creek and from Tamarack - some of us came one way, some of us the other. Both routes are rough as they have ever been, the last two miles to the trailhead a risky endeavor for those not accustomed to the navigation of rocky dirt roads. While I've seen anything from Mini Coopers to BMWs to Celicas and Civics, you'll likely need another alignment when you get home if you don't have decent clearance. Make sure you have good tires. Your alternative is the Cliff Lake trailhead - paved all the way to Courtright Reservoir.
Top

Went up to hike and fish big McGee lake, check the pass and look at some other lakes in the McGee drainage.
At big McGee, snow level started pretty solid just below the lake at around 10,500'. BM was completely frozen except for about 5' at some parts of the shore. The ice appeared to be about ap1' plus still. Complete snow past the lake with no significant tracks. Next day backtracked and headed to Stealhead lake to see if we could find fish. Lake was compltly open with very little snow around. Great camping areas and unfortunately all the 6" Brooke's you could want. Snow looked pretty solid about 10800'. Mosquitoes about a 2-3 from 9300' to 9800' and not one above 10000'. TR to come.
Top

Hiked in from Rock Creek Lake to Francis Lake, then up most of the route for Morgan South before cutting East over to Twelve Flags Peak. No snow at all on the trail to Francis Lake. Lake is melted out. Mosquitos were out at the lake (and the TH parking area); not so bad elsewhere. Patchy and mostly (but not completely) avoidable snow higher up. More snow to the west and on north-facing peaks to the south.

Mt. Morgan from Francis Lake:
IMG_0290.JPG
West from Mt. Morgan's ridge:
IMG_0292.JPG
South from Twelve Flags Peak:
IMG_0300.JPG
You must be registered and logged in to view the files/photos attached to this post.
Top

Mostly snow-free except for patches in trees around 8K and above. Some usual larger patches include under Granite Chief ski lift and north side of Andersen Peak. I used trail runners and hiking poles without being slowed down too much. If I had traction devices (e.g. microspikes) I would have put them on in a few steeper exposed sections probably. Mosquitos were 1-2 mostly. 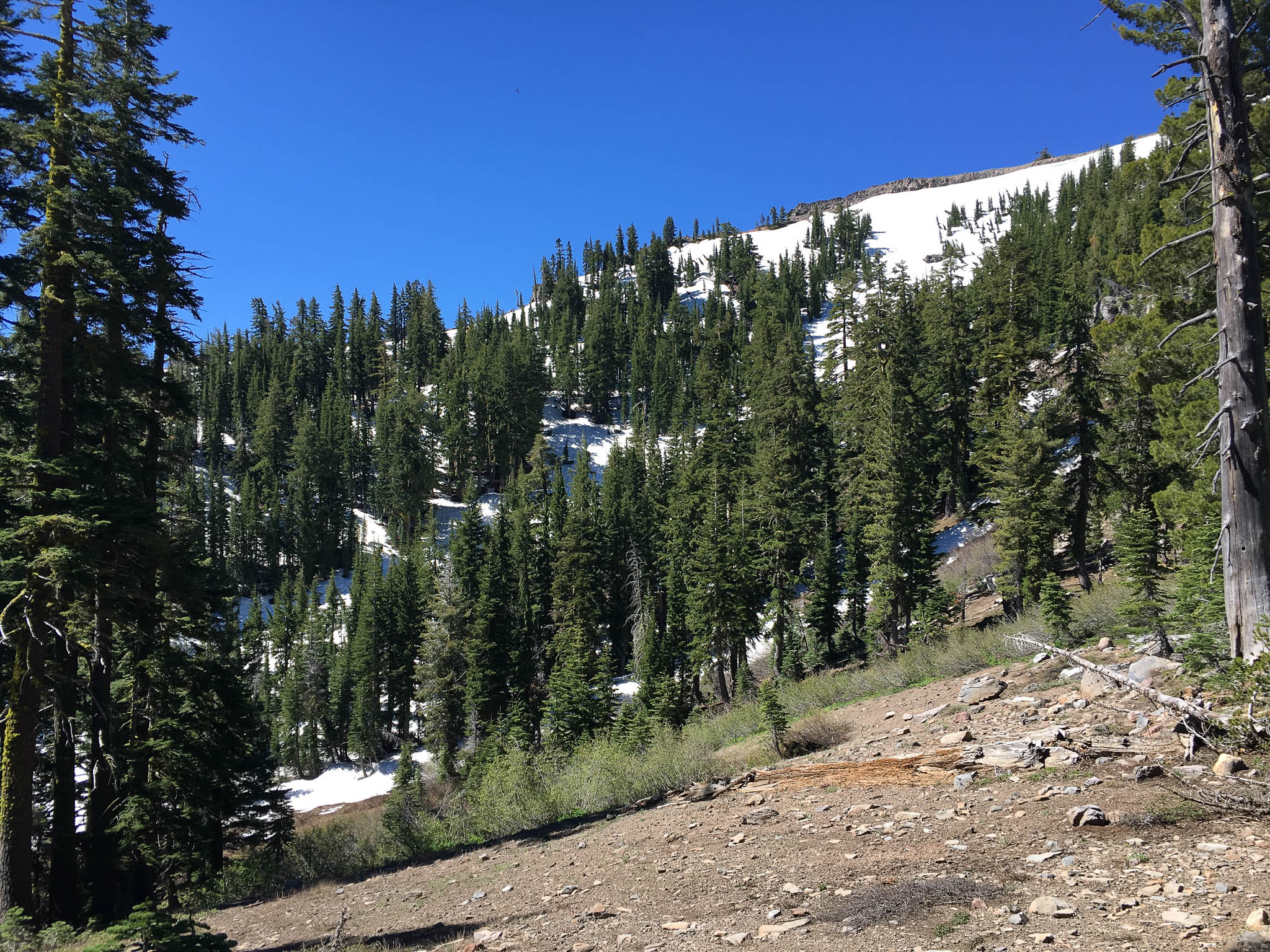 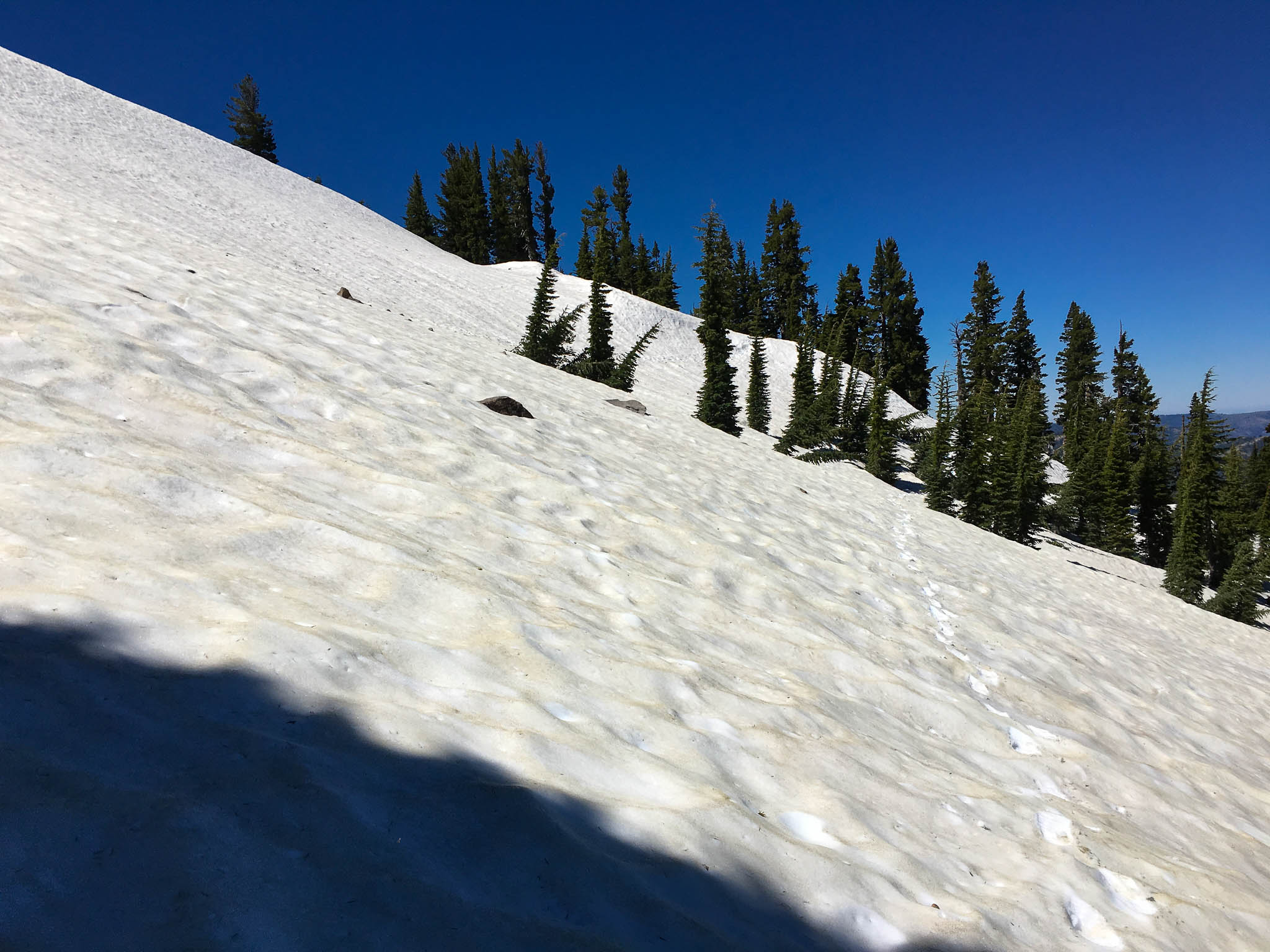 Clear trail around Echo Lakes up to Haypress Meadows, then patchy snow, wet trail until the second Lake of the Woods jct. Watery trail with long stretches of tracked snow down the north slope to Lake Aloha. Area below Aloha has the rock channels filled with water/snow to at least Channel Lake.

The fords over West Fork Cherry Creek--both the Pine Valley trail crossing and the use trail crossing on the way to Rosaco--were quite doable--knee deep at the former and not much more than that if you chose properly at the Rosaco crossing. All the other fords (Lily, Piute, Buck Meadow) were easily done with reasonable care--Lily can be stepping stoned now, Piute is calf deep, Buck Meadow is knee deep. While W Fork and Buck Meadow Creeks are roaring attractively over their cascades, many side steams are already dry. For example, the outlet to Big Lake has already completely shut off, and the Golden Staircase into Big Lake has only a tiny trickle.
Top
Post Reply
67 posts