steiny98 wrote:Mark- do you know what type of pan that is? I have had a hard time finding a 10 inch Ti pan at that weight.

steiny98,
Bought it on a trip when passing thru an open marketplace while visiting Japan - many years ago...and sorry, do not read Japanese.
BTW, being pure Ti, a bit pricey, even way back then.
mark

by longri
I'm surprised a titanium frying pan works very well. The material is typically thin for a lightweight pan and is a relatively poor conductor. That's a recipe for a hot spot, especially with a small burner head.

I'm new to using titanium. I bought an Evernew Ti pot last year and the first time I tried to make popcorn in oil the kernals burned black right in the middle of the pot and a distressing cloud of noxious smoke billowed out. I found that in order to be successful with this I had to keep the pot in continual, circular motion over the flame. With my old thin-walled aluminum pot I would just sit it on the stove and all was good.

So a titanium fry pan would seem to be a terrible idea. Obviously I'm wrong. Or do you have to use techniques similar to what I just described?

by AlmostThere
When fishing above fire limits I take a 10 inch aluminum skillet to fry fish. That's usually when I indulge in Packit recipes that require frying or toasting things.

longri wrote: I'm new to using titanium...(poor conductor, hot spots?)... a titanium fry pan would seem to be a terrible idea. Obviously I'm wrong. Or do you have to use techniques similar to what I just described?

Yes, a bit of a learning curve with Ti - All part of a system... designed and used primarily for when cooking fish at altitude.
- Also need a hot, stable stove with a very wide flame pattern - carry a MSR Windpro. Alcohol just not hot enough.
- Use the foil-wrap method...use/carry pre-cut, folded, large, foil squares. Stuff cleaned trout w/ spices and anything, a little olive oil on the outside, make a tightly sealed foil packet. Two or three packets into the hot pan... use a rock press...maybe 4 minutes a side - turn twice...~15 - 20 minutes and done. It is the hot oil that cooks the trout. Have cooked 1000's of trout in that pan this way...ask Mike...works fine.

For saute garlic/ onions, you do have to keep the pan moving...keep a close eye too for tortillas.
BTW, Another nice thing about Ti - a little sand paper in the spring (can't scratch Ti) - and ready for a new season.
taut lines,
mark

by cslaght
What about a prong or a large fork?

by markskor
Russ asked to see the Japanese writing on the bottom of my Ti frypan...maybe someone here can read it?
So, got out the sandpaper and just now cleaned it - had to do it soon anyway.
pan 1.jpg
pan 2.jpg

Wandering Daisy wrote:There are wire nets used to put on top of frying pans to keep down grease spatters. They are light weight, but I have not seen any in small sizes. They are not particularly sturdy, so you would have to be careful packing them. Not sure they would stand up to direct heat from a flame. But they are cheap, so you could buy one and try it.

OK, Experiment #1: I took one of the thin aluminum spatter screens, laid my tortilla on it, and held it over the open flame on gas burner. The spatter screen disintegrated. I'll move on to some other experiments and keep all you would-be tortilla toasters informed.

I'll get a hold of some stainless steel screening and see if it holds up.

I'm sure Markskor's frying pan works beautifully, but I might prefer raw tortillas to the weight of the pan, since I don't fish and would have no other use for it.

by longri
I weighed my "too heavy" steel toasting screen and it was 2.2oz, not counting something to hold it with as it's all metal. That's actually not that bad but I know a lighter version is possible. The wires are pretty fat.

I'll hunt around in the local Asian markets. I need to pick up another 2qt container of soy sauce anyway.


EDIT: I went and got my jug of soy sauce and while at the market found a number of screens and wire trays that looked promising. But each item had some flaw that would require creative engineering. Basically, everything I found either had a burly handle that was really heavy or had no handle at all. I left thinking it might be easier to just make something myself out of heavy gauge wire, or maybe even a coat hanger. Or maybe you can buy a titanium fry pan and drill it out. :-)

by gary c.
A couple of years ago I bought a package (2 per pk) of "cooling racks" from the .99 cent store. One weighs next to nothing and fits in a 1gl Ziplock bag. They turned out a little too flimsy for grilling a steak but would be excellent for your tortillas.

by Eiprahs
You can make your own in the field from willow. Seems a lost art now, but we used willow twigs for fish stringers and hotdog/trout skewers when I was a kid. Our predecessors on the land used split willow to make baskets and any number of useful items.

Green willow will hold up to heat until it dries. I don't have any willow on my stream bank, but I do have stream bank dogwood, Cornus cericea, which I used to make the illustrated tortilla rack in about 5 minutes. I used green garden ties on the handle simply because I had them--fishing line, hair ties, dental floss, duct tape could all be used. 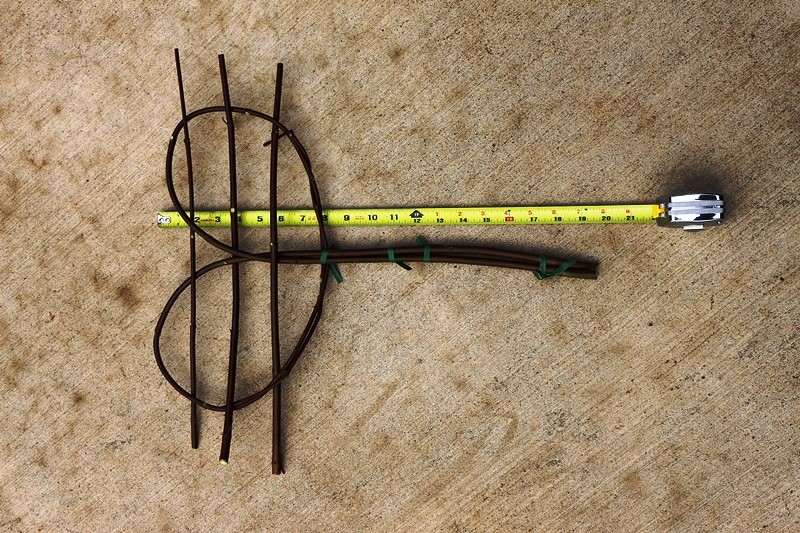 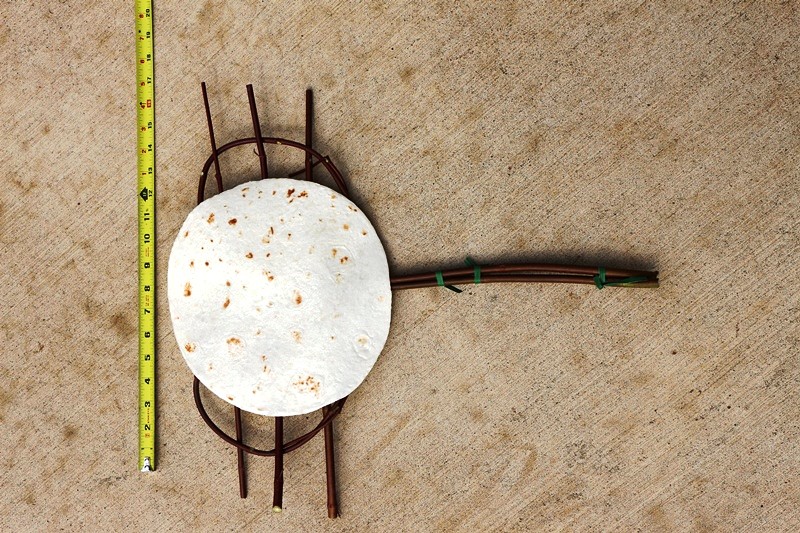