Topics covering photography and videography of the flora, fauna and landscape of the Sierra Nevada mountains. Show off your talent. Post your photos and videos here!
Post Reply
68 posts

Have never taken any of the newer era low light sensor DLSR night sky images but recently spent some time studying what it is about. I have however been taking North Star circular star trail images on film for decades and have some nice shots even on 4x5.

With star trails, strategy is to topo analyze high elevation Sierra locations for interesting silhouette landscapes towards the north. One does not want the silhouetted ridge lines to rise up too many degrees because the dark areas below skylines even when they are light granite or covered with areas of snow tend to be boring. Thus better to fill such frame space with more of the sky. One can do the trig for determining how high a ridge may appear in a frame beforehand unless one has actually taken night shots at a location. Here is a primer:

Then plan a visit when air is clear with no moon. Quite a lot of Sierra visitors tend to be impressed by even hazy night skies on moonless nights simply because they are unfamiliar. Believe me when I say that exceptionally clear air is noticeably more impressive. Of course August in this era has become horrible with all the smoky fires. A few of us given the drought were predicting backpacking this late summer might be the worst ever and that seems to have come true. Clearer skies are more likely in the fall or spring when cold clear dry air behind cold fronts moves in. That of course is also best for alpenglow subjects. Another choice is to use impressive tree silhouettes. Sierra juniper, foxtail pine, and bristlecone pine are going to offer some of the best. One needs to find subjects that stick up above landscapes into the sky. Since I have a huge body of work of daylight illuminated trees, already have some really strong ones sized up to return to for this new era night work.

Shooting the Milky Way moves one's camera in the opposite orientation more to the south. This is where I will have some learning to do. Some of the same things apply versus star trails like subjects that don't rise up too many degrees while still having interesting shapes. What one can add is water reflections below and that is one type I've been keen to size up.

For the serious photographer much of the information to get started is just a matter of studying online information on photographing night skies although information on most such sites tends to be mediocre. For instance few sites suggest such obvious strategies as taking throw-away preliminary framing adjustment shots using highest ISOs. And there is huge advantage to using software for figuring out what a night sky is going to look like from a specific location and time of night before getting out in the field. Like this:

Especially if such requires any serious driving then hiking to get to. One has to understand that just because one might have taken a night picture from some lake a few years ago does not mean it will be so again unless one visits at near dates of season. That is because the night sky is continually seasonally changing. Small lakes and ponds that are not in drainages that night sumping air flows down are likely to have calmer water versus larger bodies of water. That is extra important to avoid blurring because shutter speeds will be slow with even the best sensors. As an example, the ponds at Island Pass with nothing blocking to the south and more distant will likely work better than down at the shores of Thousand Island Lake. And Nydiver Lakes that are up on a high bench without much blocking towards the south and southwest are going to work far better than down in a deep hole like Ediza Lake where cold sumping night air from higher up in the drainage is also likely to make the surface wavy. For the same latter reason, calm at Ediza is usually brief about mid-mornings as up canyon breezes from expanding canyon air balances the two flows.

I recently received a Sigma 19mm F2.8 DN wider lens to complement my 30mm and 60mm so will be using that lens for night work. Have seen some nice work using stitch blending of multiple frames so don't expect a need for anything wider.

For those interested in printing such images, I would suggest finding a commercial printing service that can do Kodak Professional Duratrans Display Material because the contrast levels involved using traditional printing media are too weak. Using a back lit display box gives such prints vastly more impact. The media is quite robust too so prints can be displayed without protective glass.

David, thanks for the great post. Gives me a lot to think about while getting ready for next month's trip. I'm hoping that by September 22 the fires will have let up, but I'm not going to get my hopes up.

Does anyone have suggestions for a tripod that is good for backpacking purposes that won't break the bank? I feel as though this is kind of a unicorn. Light enough to carry for a 5 day trip, but sturdy enough to do night time shooting, and not cost more than all my camping gear.
Top

Hi HoloKuahiwi,
Your options depend on what camera/lens set-up you intend to mount to it. I have an inexpensive Dolica Proline carbon fiber tripod that cost me $99. I replaced the ball head with a sturdier one. An inexpensive knockoff model I found on e-bay that seems just fine and sturdy enough to hold my dSLR and a 70 - 300mm zoom. It also has a hook to hang weight for added support. I think it weighs less then 2.5 lbs.
“Posterity! You will never know, how much it cost the present generation, to preserve your Freedom! I hope you will make a good use of it. If you do not, I shall repent in Heaven, that I ever took half the pains to preserve it.”

Thanks for the suggestion, Jimr. That Dolica seems like a good place to start. Only camera I'd be shooting with is my Nikon D3200 with the kit lens. I'm looking at maybe getting a wide angle lens as well (I'm looking at that Rokinon 14mm that was suggested elsewhere in the thread). So my gear isn't that much weight. Of course, we'll see if I'm singing a different tune after going up and over a couple of passes.
Top

Holokuahiwi wrote:Thanks for the suggestion, Jimr. That Dolica seems like a good place to start. Only camera I'd be shooting with is my Nikon D3200 with the kit lens. I'm looking at maybe getting a wide angle lens as well (I'm looking at that Rokinon 14mm that was suggested elsewhere in the thread). So my gear isn't that much weight. Of course, we'll see if I'm singing a different tune after going up and over a couple of passes.

If you get one of these, I highly recommend you replace the ball head. I got this one off of e-bay and it is much sturdier and smooth, oh an cheap! $21

BEIKE BK-03 Camera Tripod Ball Head Ballhead with Quick Release Plate 1/4" Screw
“Posterity! You will never know, how much it cost the present generation, to preserve your Freedom! I hope you will make a good use of it. If you do not, I shall repent in Heaven, that I ever took half the pains to preserve it.”

Rae Lakes - Looking back at the Painted Lady

Spent some time at Rae Lakes with my daughter this summer. Here's a shot look at the Painted Lady
You must be registered and logged in to view the files/photos attached to this post.
Just another day in paradise
Top

Haven't been on the forum for a little while. Was surprised to see the activity on this thread! Enjoyed looking through all the new Milky Way photos, keep 'em coming ;-)

I got in hardly any last year myself, but hope to take more this year, starting soon.

One more from last summer:

sdhiker wrote:Has anyone used the Rokinon 14mm ultra wide lens http://www.amazon.com/Rokinon-FE14M-E-U ... B00HAF167Y, and if so what was your impression of it, especially if using it on a Sony A7 series.

Hi, pretty late in replying here, but just thought I would mention I have the Rokinon as my backup lens. I use the Sigma f/1.8 20 mm as my main lens, but I like the Rokinon too. Wider and it takes nice photos. For some reason, I like the Sigma better, but not really sure why. I think it's a bit lighter for backpacking and I seem to be able to focus it better, but that might just be because I use it more and have a better feel for it.

Anyhow, for the price, I don't think you can go too wrong with the Rokinon. It's all manual, but not really a drawback for night sky, which is usually all manual anyhow.
Sierra Nevada, Mojave Desert, Night Sky Photography: http://www.evanthomasphoto.com/
Top

My 4th of July fireworks this summer, close to the Silver Divide at my favorite lake. The small "Trailpix" tripod replacement gizmo does work quite well, even with a heavy DSLR 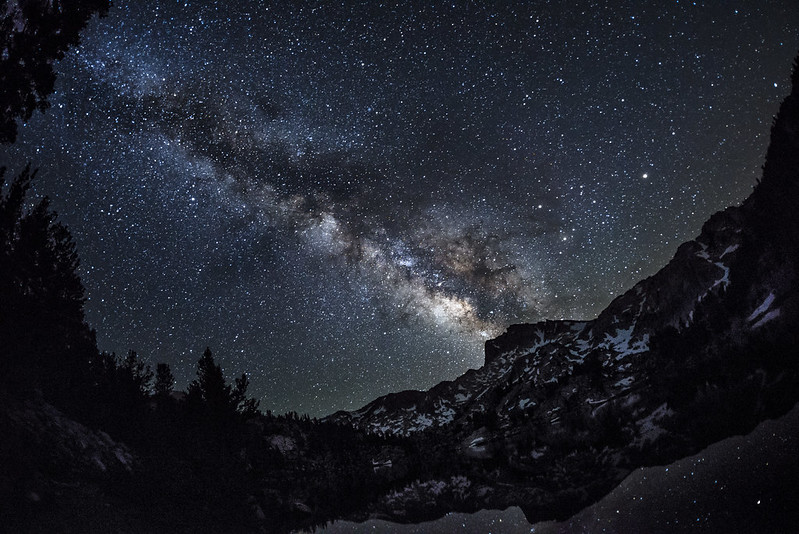