Share your advice and personal experiences, post a gear review or ask any questions you may have pertaining to outdoor gear and equipment.
Post Reply
69 posts

hikin_jim wrote:Pick whatever PSIG one feels is appropriate at sea level, and one should have that same PSIG at 10,000' in temperatures that are 20 Fahrenheit degrees colder.

Jim, it doesn't scale that way. The P-T curve is logarithmic. As the temperature drops the pressure differential narrows so you won't get the same fuel flow rate.

Um, I think you might have posted the wrong chart. That chart appears to show constant temperatures.

The chart you posted earlier seems clearer to me.

I think what you're saying is that simply having the fuel be X degrees above the boiling point is insufficient to predict sufficient canister pressure. What I think you're saying is that it's necessary to know what the psig is for a given temperature and atmospheric pressure of a given fuel mix in order to know whether or not you've got sufficient canister pressure. Am I stating your position correctly?

hikin_jim wrote:The chart you posted earlier seems clearer to me.

We can go back to the chart you're more comfortable with.

That's with isobutane, i.e. a near-empty canister. If you do the same analysis with a full canister the discrepancy grows to something approaching 10°.

I know, I know, your rule is just a loose guideline. But if it isn't based on sound physics then what is it based on?

My position is that it's complicated and the information isn't available.

You don't know what sufficient pressure is, what the mixture is or the fuel temperature is. All you know is how long it's taking to melt the pot of snow. It's not like you're going to melt snow faster if you have a calculator with you.

A simple rule of thumb can be useful for deciding what kind of stove to take on a trip. But basing this on the physics is the wrong approach. It's better to simply say what works in practice.

My experience is that at 10,000 feet it can be difficult to run an upright canister stove when the ambient temperature is 0°F. If I were to encounter that on a regular basis I would carry a different stove.
You must be registered and logged in to view the files/photos attached to this post.
Top

are we done yet? I only ask because this was a stove review. If you want to spin off a fuel review, cool.

Remember that people go to a store and buy what they can generally get on the way to the trip (fuel can wise) and use it.
Top

It's only been 5 pages, not bad for an off season review of a stove.

"On this proud and beautiful mountain we have lived hours of fraternal, warm and exalting nobility. Here for a few days we have ceased to be slaves and have really been men. It is hard to return to servitude."
-- Lionel Terray
Top

just like to see the fuel discussion somehow separate from the stove discussion. Should we push for 6 pages?
Top

rlown wrote:just like to see the fuel discussion somehow separate from the stove discussion.

That's just a euphemism for wanting to end the discussion.


One more thing I forgot to add. At colder temperatures the rate of heat loss is higher because the difference between desired fuel temp and ambient temp is greater. That makes it harder to keep the canister warm enough. It's another reason why things don't scale the way Jim has proposed.

Also, at higher elevations there is often more exposure to wind.
Which brings us back around to the stove Jim was reviewing.
Top

hikin_jim wrote:In addition, I can work with 2 in my head, and it's easy to remember. It's a rule of thumb not a precise calculation.

So then make it 1° per 1000 feet. It's no less precise and the arithmetic is even easier. Since your rule is mostly for beginners, don't you think it's wiser to err on the conservative side instead of being overly optimistic?

Keep in mind though that this is a "floor." In other words I'm trying to describe some kind of a lower operating limit. The title of my article was "How Cold Can I Go?" The temperature 20°F was intended to represent the lower limit. In that article, I refer to 20F as a planning number, i.e. not a hard and fast number. I also state that you need to have the proper fuel (i.e. isobutane not n-butane). I also state that if the stove starts struggling that you'll need "tricks" to keep it operating well (and I provide a link to an article that describes a method for increasing performance).

In other words, the 20°F is not a "stand alone" number. This is not a "you're stove will be perfectly happy at 20°F, just as it would be at 75°F" number. Not at all. I am suggesting a lower limit that be used as a planning number for what gear you should bring. I clearly state that the stove may struggle.

You can go lower than 20°F as you gain elevation. The 1963 American expedition to Mt. Everest was able to use their Bleuet stoves (100% n-butane) at sub-zero (Fahrenheit) temperatures.

The effects of elevation relative to cold temperatures are described on page 46 of the August 1976 edition of Backpacker Magazine. Not only do they describe the over all effects, but they mention the 1963 American Everest expedition and specifically mention that the temperatures were below zero. 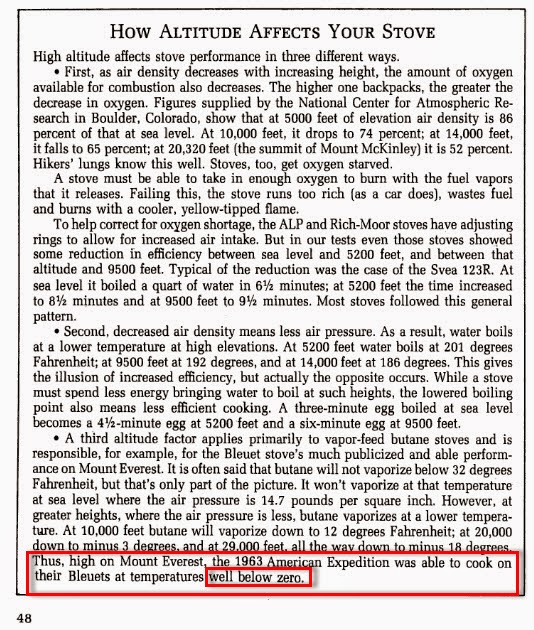 Backpacker Magazine made the same mistake you did. You can't just use the boiling temperature and scale from there. At the South Col n-butane boils at -13°F. But the P-T curve is pretty flat at that temperature. To get to 5 psig canister pressure would require a fuel temperature of 16°F, nearly 30° higher.

Clearly they were warming their canisters in 1963. They probably cooked in their tents. So what's the "floor" temperature really mean when you can heat up the cooking environment arbitrarily?

You say that "the stove may struggle" at the floor temperature. But in How Cold Can I Go you wrote:


Generally, about 10F/5C above the vaporization point will give you good operating pressure.

A good operating pressure or a struggle -- which is it?

When I tested my stove I found it required fuel at least 15° above boiling to limp along and closer to 25° above for good operating pressure. At 10,000 feet this would increase by another 5° and at 26,000 feet even more.

The physics of the fuel is actually the really easy part. But how are you going to calculate the heat fluxes in your cooking system?

An empirical approach seems far more useful to me.
Top

longri wrote:Backpacker Magazine made the same mistake you did.

Ha! Well, at least I have good company.


longri wrote: So what's the "floor" temperature really mean when you can heat up the cooking environment arbitrarily?

The intent was a planning number. If the ambient temperatures were getting too far below the boiling point, my thought was that it would be worthwhile to switch to an inverted canister stove which won't have as much evaporative cooling, doesn't have the propane leaving the mix as long as the stove is operated in inverted mode, and requires less canister pressure to operate.


longri wrote:You say that "the stove may struggle" at the floor temperature. But in How Cold Can I Go you wrote:

Generally, about 10F/5C above the vaporization point will give you good operating pressure.

A good operating pressure or a struggle -- which is it?

OK, fair question. That will need to be re-written. It may be a starting point at sea level depending on what one considers good operating pressure, but you've been quite persuasive that it won't work at colder temperatures.


longri wrote:When I tested my stove I found it required fuel at least 15° above boiling to limp along and closer to 25° above for good operating pressure.

If I may ask, at what elevation were your tests conducted?

Thank you for that feedback. All joking aside about Backpacker magazine being good company in making errors, this the first time I've considered the effects of cold on relative psi. Every article and source I've read, not just the ones from the 70's but the modern ones as well, have all approached the subject from the perspective of the boiling point alone.

Would you be willing to expand this chart, below, to show the range from sea level to 30,000 feet elevation?

longri wrote:But how are you going to calculate the heat fluxes in your cooking system?

Do you mean the rate of heat loss from the canister into an extremely cold environment and how that will affect canister pressure? I try to address that in Gas for Extreme Cold

hikin_jim wrote:If I may ask, at what elevation were your tests conducted?

Pretty close to sea level, but it's irrelevant. I was measuring flow rate for specific gauge pressures. To be a little clearer, my setup looked like this:

The stove valve was always fully open. I controlled the internal pressure by throttling the valve at the canister. That way the temperature and external air pressure didn't matter.


hikin_jim wrote:Every article and source I've read, not just the ones from the 70's but the modern ones as well, have all approached the subject from the perspective of the boiling point alone.

Yes, I know. Anyone can write anything, especially now that we have the internet.
Hey, maybe I'll start a blog! :-)


hikin_jim wrote:Would you be willing to expand this chart, below, to show the range from sea level to 30,000 feet elevation?

hikin_jim wrote:Do you mean the rate of heat loss from the canister into an extremely cold environment and how that will affect canister pressure?

I meant the heat loss itself. A chemical engineer could do it for a simpler case, say a canister set out in still air, releasing gas but away from the stove. Or even with wind it probably isn't too big of a deal to work out. But when you put it near the stove, wrap it partially with a wind screen, set it in a little pan of water, hang it in the tent -- how do you model that? I think it's too complicated. The easier thing to do is skip the theory and just go find out what works.
You must be registered and logged in to view the files/photos attached to this post.
Top
Post Reply
69 posts

Users browsing this forum: No registered users and 6 guests