by JonahOlson
Hi HST! I'm new here. I just got back from a failed attempt at traversing from Tyndall to Versteeg, Trojan, and Williamson. Wondering if anyone here has done this and can share some beta? Tyndall was fast and fun via the North Rib, but from there we had very little beta save for the stretch between versteeg and Trojan (what looked like the easiest part). After a lot of talus hopping and weaving in and out of gullies and ridges, we ended up atop the most prominent sub peak along Tyndall's southwest ridge. There was actually a summit register up there with only one folded piece of graph paper with about a half dozen logs going back to the 70s. No name for this peak could I find (should I name it? Ha). From the notch south of this summit, the ridge line became class 5. We decided to descend south west down into a loose gully in hopes of traversing lower. This gully cliffed out so we traversed south to peer over a steep rib into another gully. Another cliff-out. We brought rope and some pro for emergency rappells but decided not to chance it this late in the day (we got a late start) so struck the whole mission, headed back up and over Tyndall, down the rib, into Williamson bowl and up to Lake Hellen of Troy to scope the rest of the route from below.

Looking back on it now, it probably would have gone with a couple rappells, but at the time, it felt off-route and not safe considering our lack of good beta.

From Hellen of Troy I noticed something: Regarding the last ridge traverse from Trojan to Williamson, there looks like a pretty obvious route up Williamson from the small peak in the ridge between Trojan and Williamson. The route would start on the moraine to the east of the mouth of Hellen of Troy, looks class two or three up to the small peak, then a pretty sweet looking ridge traverse across the black rock to the pinnacles on the southwest "ridge" of Williamson. From there, one could join up with the Bolton Brown route to the summit. I looked for beta on this route before and found none... It would be Williamson via the Southwest Ridge. Anybody? Looks preferable to the sloggy "tourist route" up the west face.

by psykokid
I was just up there this past weekend and climbed Tyndall via the north rib on Saturday. We ended up going down the southwest face which ended up being a nasty talus/boulder hop all the way down to lake 11,959. While going around the shore of the lake on our way to the Wright Lakes Basin I stopped and took these pics of the ridge line

This one was taken from between the small lake and the big lake: 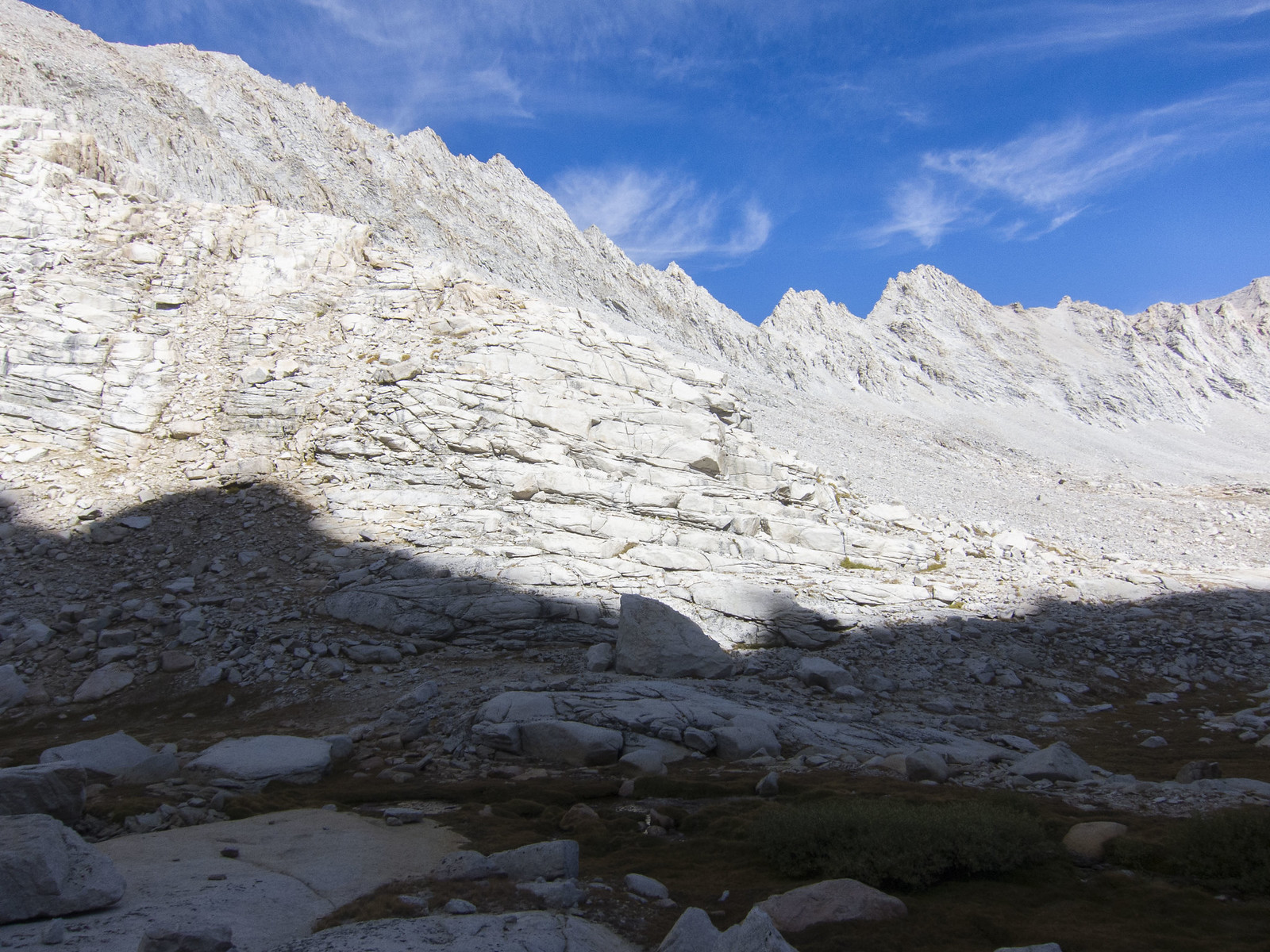 This one was taken near the southern corner of lake 11,959: 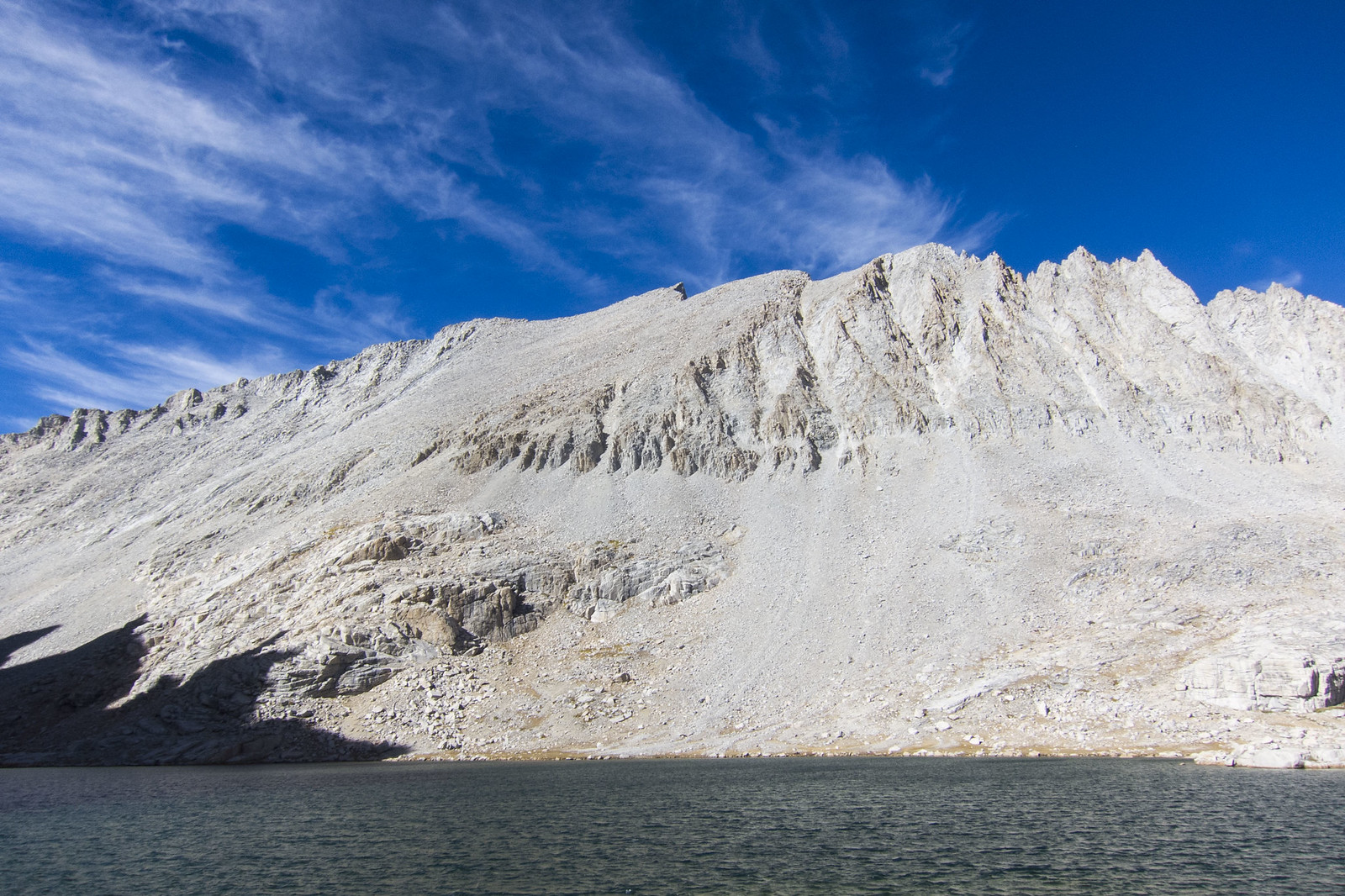 by RoguePhotonic
I only ever once remember reading about a guy traversing to Versteeg and him having to drop like a thousand feet down to the West and climb back up.

JonahOlson wrote: Tyndall was fast and fun via the North Rib

Do either of you have pictures of climb of the north rib of Tyndall? Could you please post a report on your climb? I'm mostly interested in the crux of the climb when you reach the summit ridge.

JonahOlson wrote: Tyndall was fast and fun via the North Rib

Do either of you have pictures of climb of the north rib of Tyndall? Could you please post a report on your climb? I'm mostly interested in the crux of the climb when you reach the summit ridge.

I'm working on putting together a nice TR with pictures of the trip, but for now I can say the climb up the north rib was nothing more than solid class 3 all the way up via the route we took. My friend and I stayed to the right of the rib proper where it goes from rocks to slab and had a really easy time of it. This was the first class 3 stuff my friend had ever done fwiw. When you get almost to the top of the rib you want to traverse to the left and cross over the rib proper so that you can hit a chute to the left of the rib that angles up and to the right and intersects the ridgeline. From there it's an easy scramble up the chute to the ridgeline where you stay to the right of the ridge and boulder hop all the way to the summit.

If you don't make the traverse and hit the correct chute I have heard that it can be kid of hairy to hit the ridge line from the center or right side of the rib. I had a friend that turned back last year as the exposure in that spot was more than he was comfortable with.

Here's a quick write up I did on Peakbagger with the GPS track: http://www.peakbagger.com/climber/ascen ... aid=717242