Topics related to peak bagging, rock climbing and bouldering in the foothills and high country of the Sierra Nevada. Be sure to also check out the Information Booth forum category to learn from / see if you can contribute to a profile for High Sierra 13'ers, 14'ers and cross country passes.
Post Reply
5 posts • Page 1 of 1

It’s been a few weeks since we made the trip, but the pain has worn off enough that I’m ready to reflect on one of the longer days I’ve had in the mountains on a dayhike of Deerhorn Mountain on the Saturday of Labor Day weekend. Being Labor Day, Onion Valley was pretty packed with people ready to get out and enjoy the long weekend. To avoid settling for our 9th choice trailhead for a walk-in backcountry permit, my friend suggested a dayhike climb which I casually agreed to without too much thought. Deerhorn Mountain? Sounds familiar. Class 3? I just had two awesome days climbing Class 3 on Russell and Middle Palisade. Count me in.

Perhaps in hindsight I should have put it together in my head that he had just annihilated two days on the Sierra Challenge, nailed the Thunderbolt-Sill traverse a week before, and been wary of his casual suggestion knowing how inferior my conditioning and technical ability was. But I didn’t, and hindsight is dumb anyway. 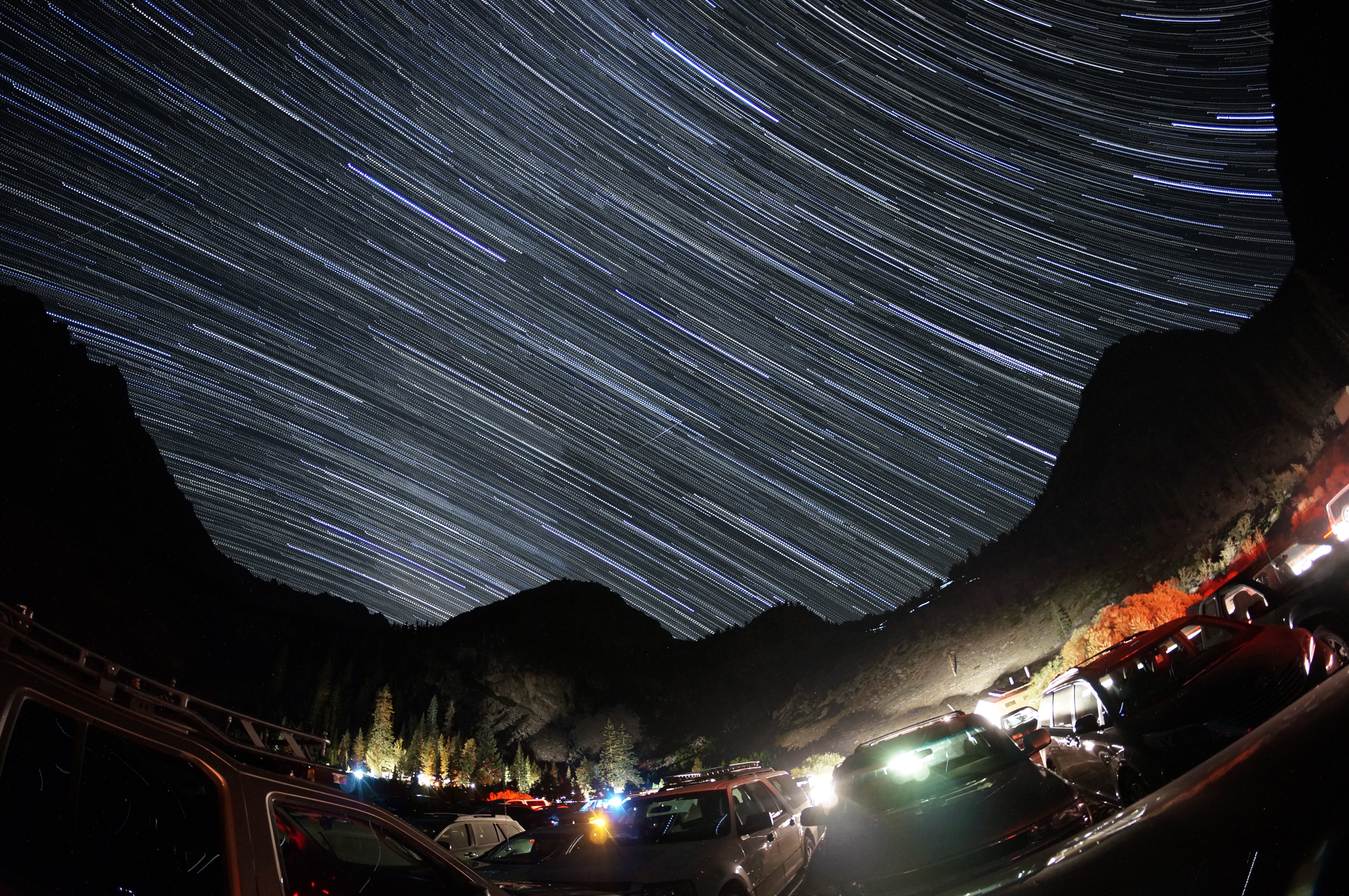 A crowded Onion Valley parking lot and campsite welcomed us for a few brief hours of sleep in the car, while the stars and Milky Way churned overhead

We set out at 3am, knowing how much ground we had to cover. We were a happy to see headlamps ahead of us beforehand, later realizing there was a group of four brave souls dayhiking farther than we did that day, on a shuttle trip to Shepherd Pass trailhead. We also met a twosome coming down, and when we asked where they came from they informatively told us: “up”.

We made some pretty quick progress up and over Kearsarge Pass, where I braved the chilly winds to the face by looking up to see a giant sky full of stars and the Milky Way raging. The sun started lighting things up right before we bottomed out on the JMT at lower Vidette Meadows, just in time to catch some awesome lighting on epic East Vidette and our eventual goal, Deerhorn Mountain. 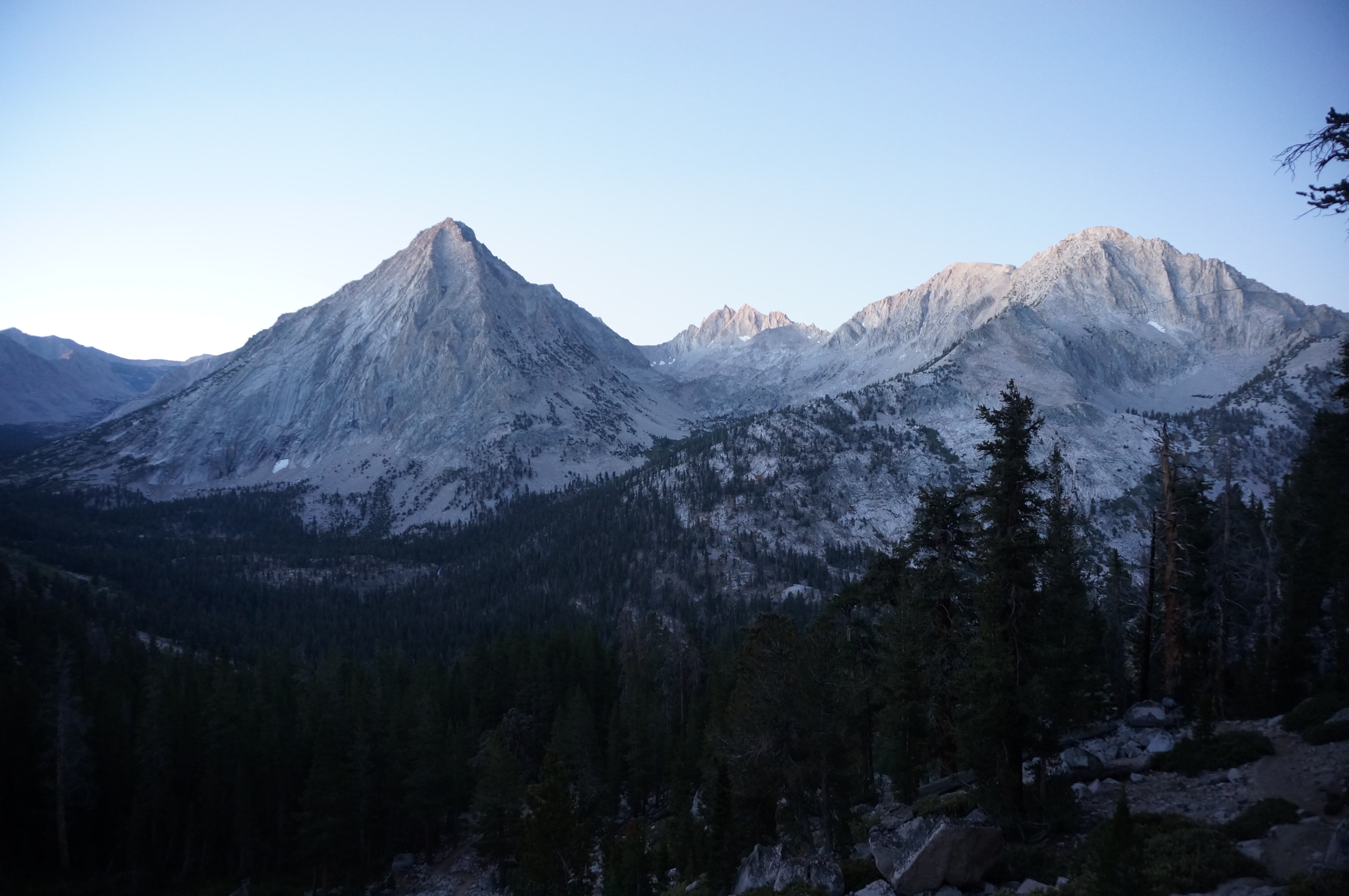 This view gets me every time. East Vidette catches the attention, but our objective is the farther one to the right.

Peeling off the trail, we crossed Bubbs Creek and bushwhacked a bit before finding a use trail heading up Vidette Creek. The cross country travel was very pleasant through this infrequently traveled basin, winding our way through a series of picturesque lakes with a great backdrop. 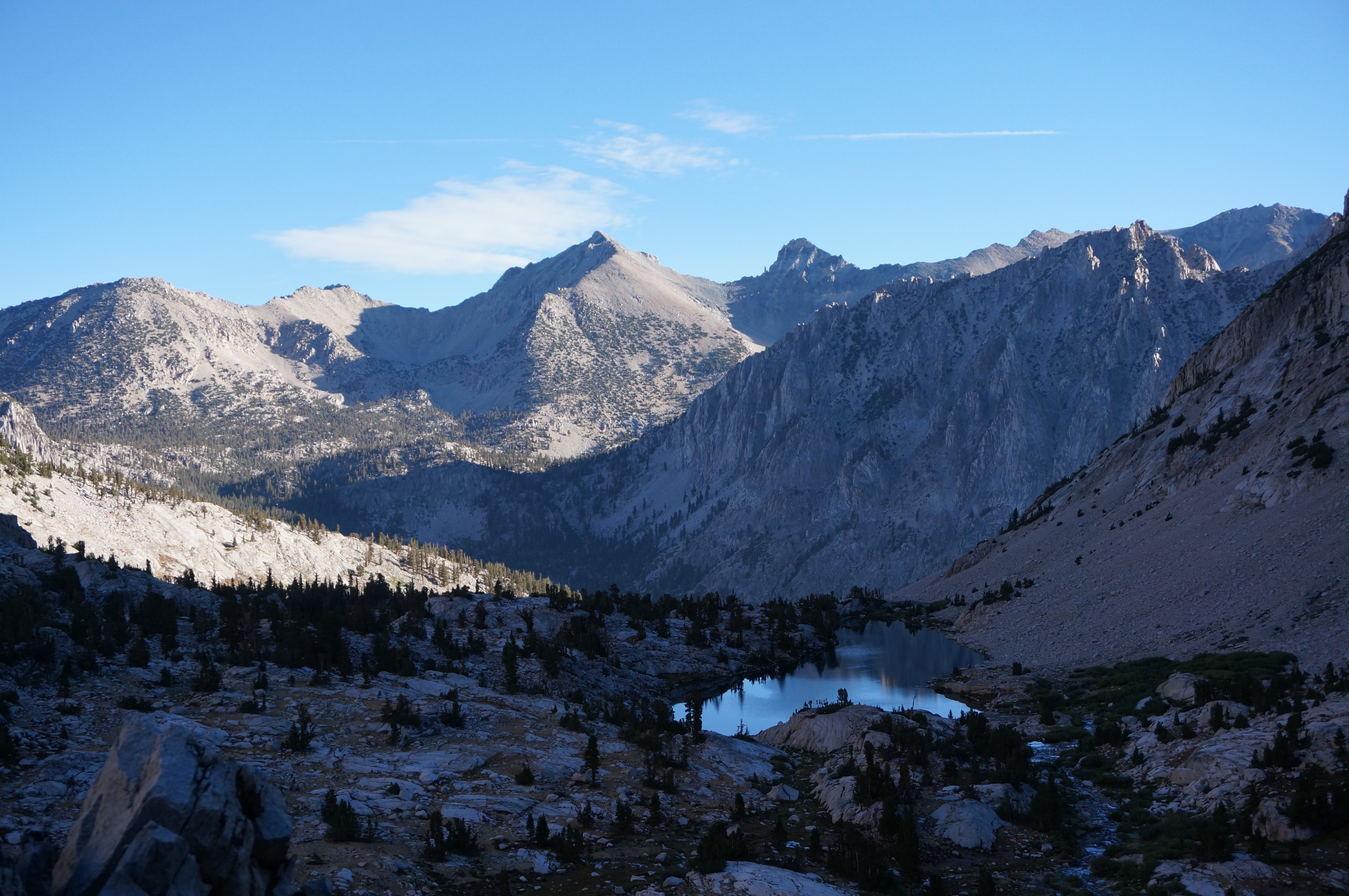 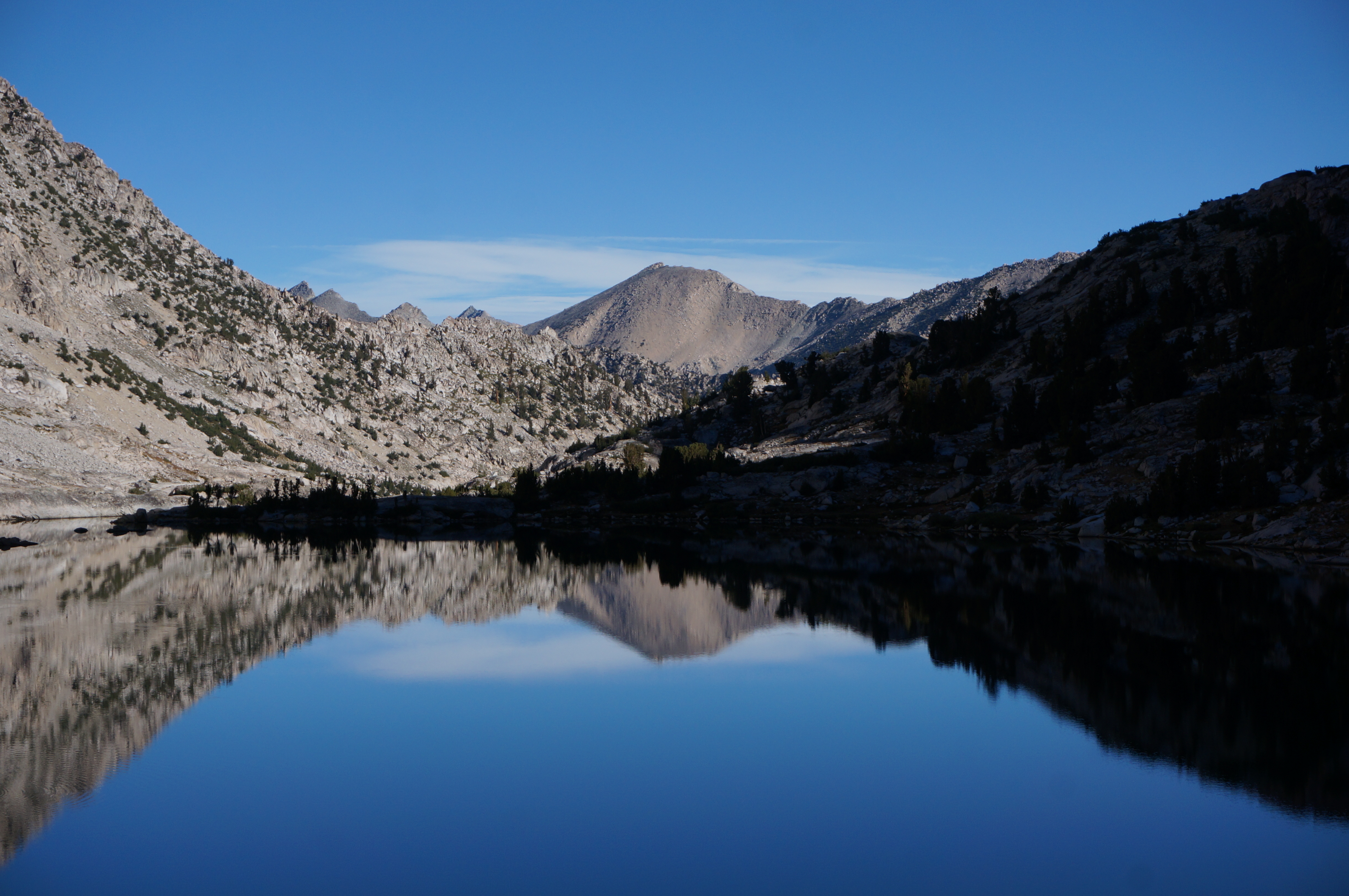 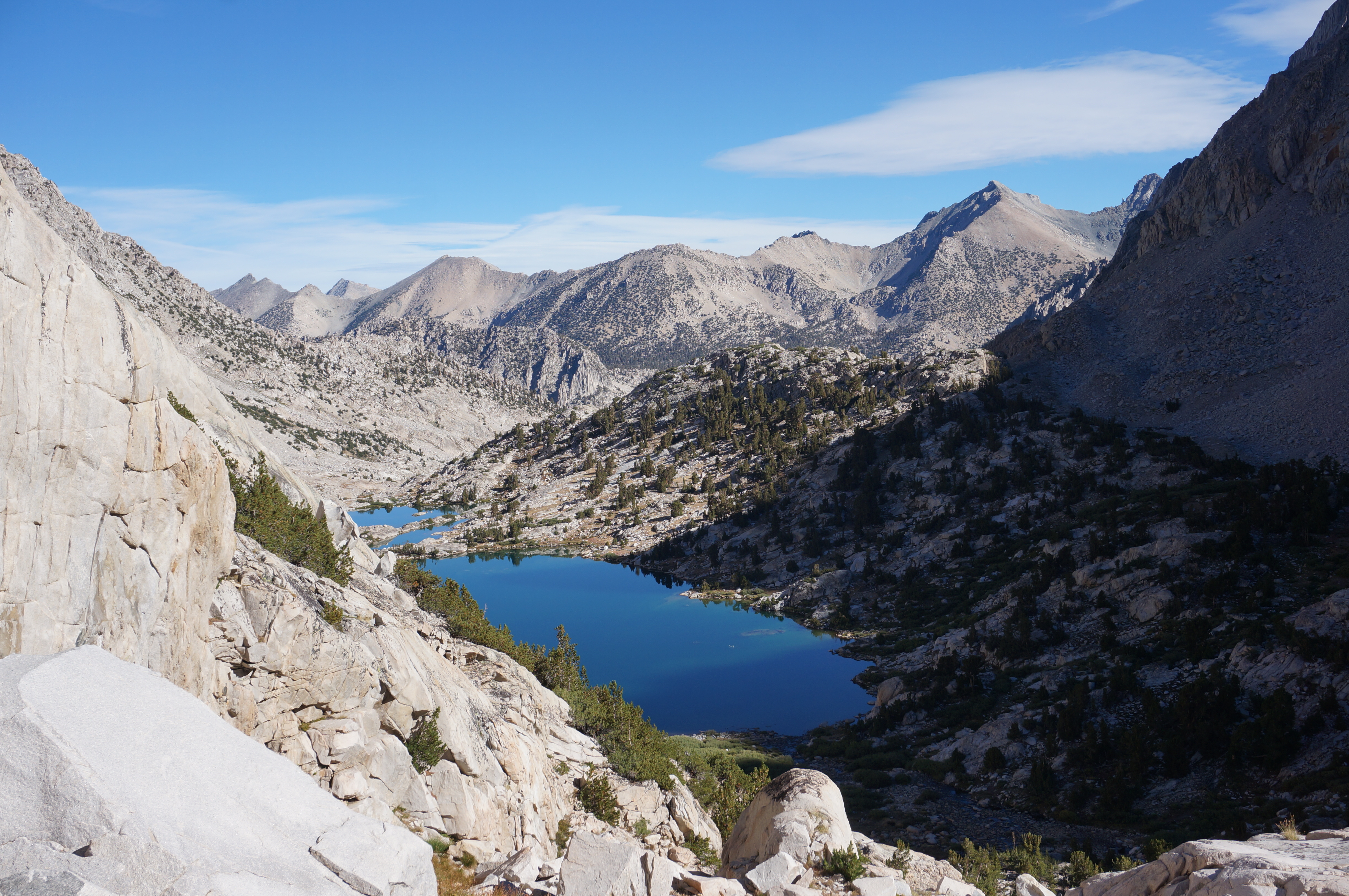 After the last lake the travelling got more difficult, trading comfortable grassy granite slabs for loose talus, a theme that would continue for quite some time. Along the way we ran into two backpackers gearing toward Deerhorn Saddle, one of which we recognized from his frequent picturesque contributions to a Sierra facebook group we belong to. Not shy about the opportunity for a quick break, we chatted for a bit before heading back up the tedious route toward our goal of the northeast ridge. 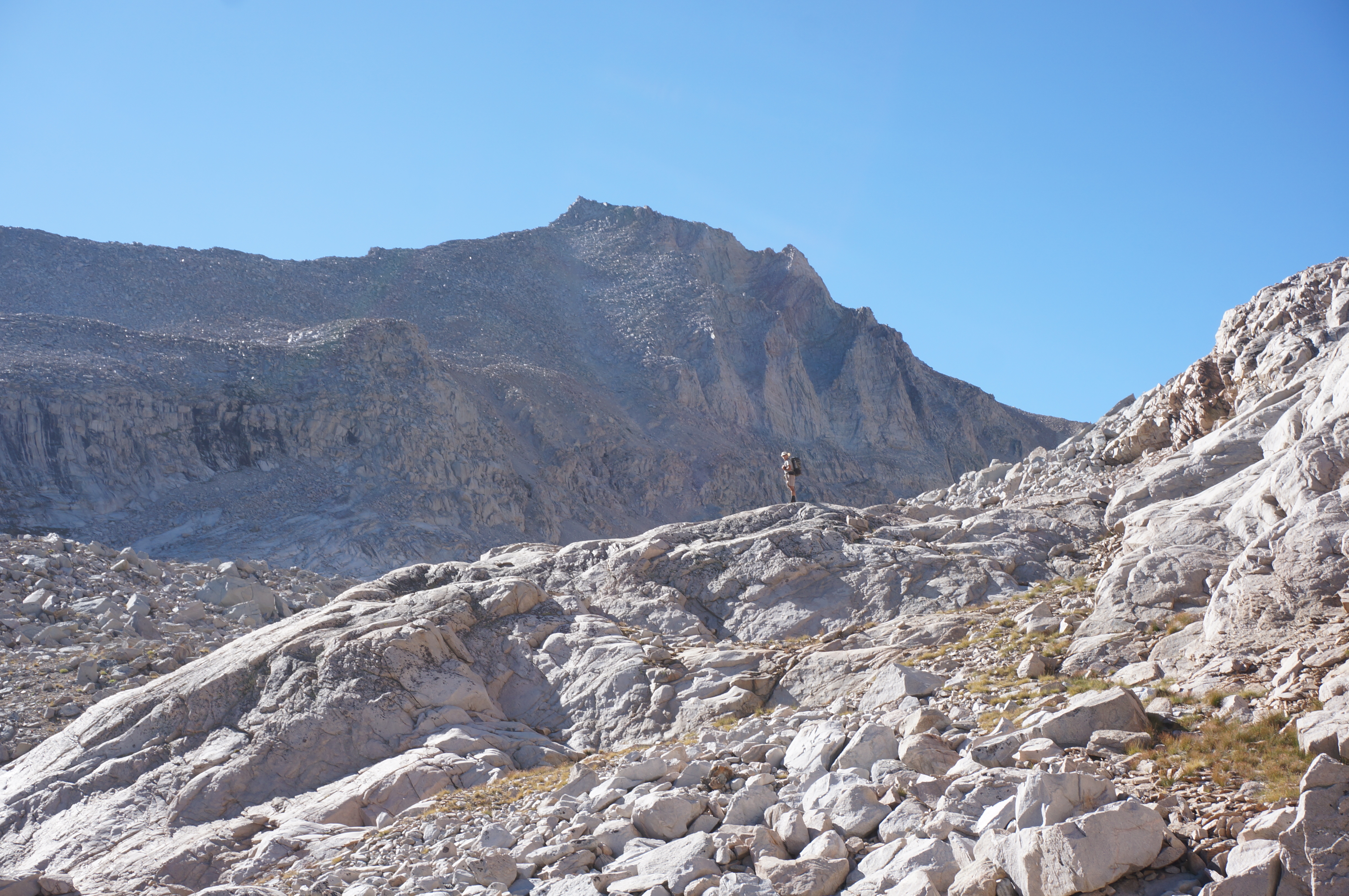 John’s winter Sierra tours are something I dream of doing

Entering the northeast ridge I was anticipating the looseness of the talus to give way to some more pleasurable solid class 3, which became the case at points. That said, it’s hard to look back on even now without thinking of several sections where we’d need to double back to avoid moves that were hard to see as class 3. Thankfully my partner in crime kept his patience with me as I slowly and deliberately took down some of my first class 4 moves on the ascent that he effortlessly gained before waiting on me. How much of this was just my perception and how much just had to do with the limited beta and lack of patience in route-finding I don’t know, but both likely factored into it. 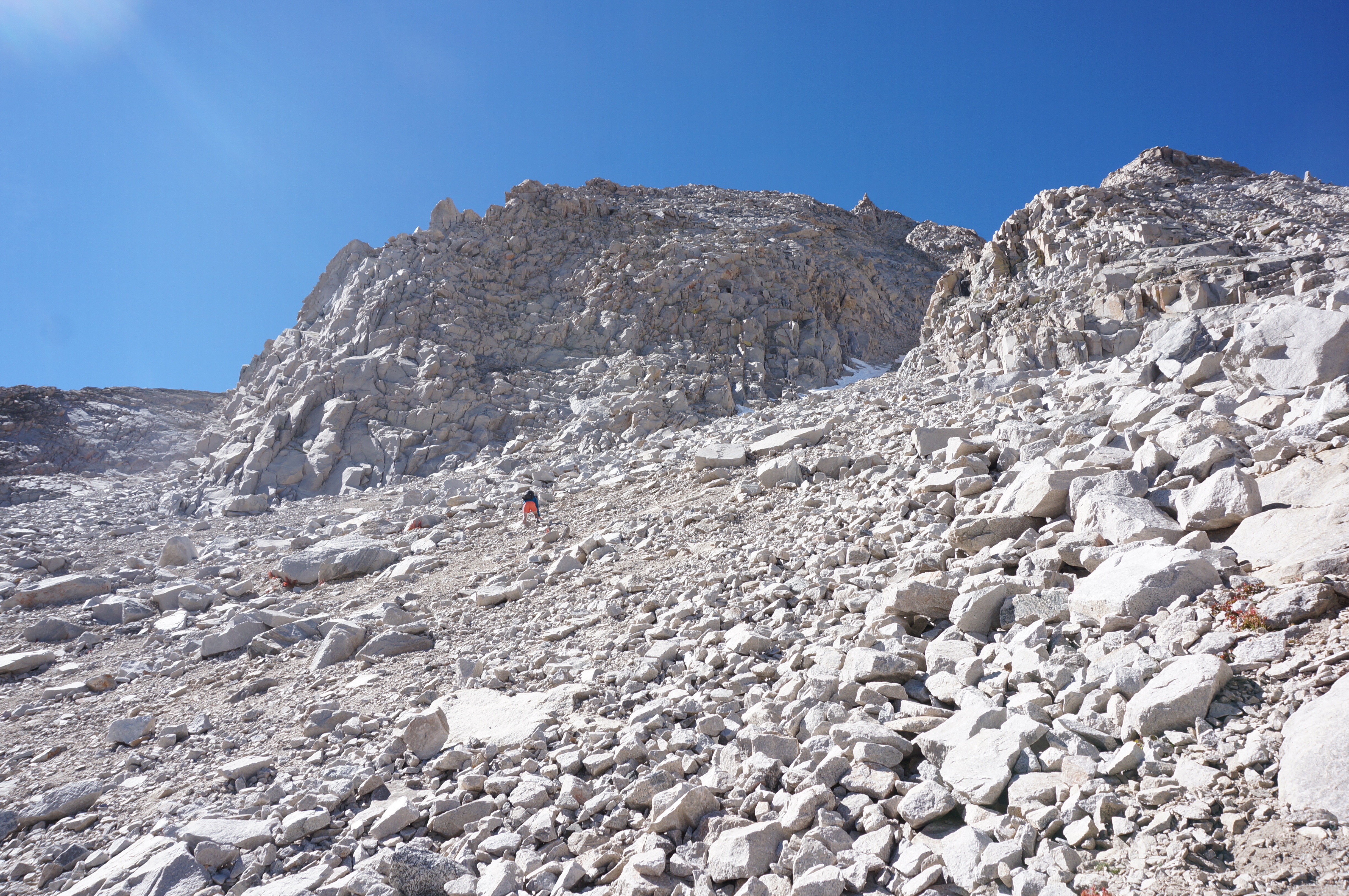 Having read beta from both Bob Burd and RJ Secor, we were anticipating a crux near the top that topped out at 40’ of class 4, and knowing what we had already endured I sat and watched Gil take down the final push to the summit while I worked up the mental fortitude in preparation for the descent, willing to forgo my summit dreams in the name of safety. However from the summit he yelled down to let me know that it looked doable to reach the buttress on the neighboring summit, and the way down from there looked like a cakewalk in comparison to what we ascended, suggesting I give the final bit a shot. I hesitantly agreed, and after a few very exposed ridge moves I made my way to what he described as the toughest part, for him a step-around of a chockstone with a nice bit of exposure. He started giving me advice before I realized that being 6’4” comes in handy and I climbed right over it instead of having to complete the step-around, and easily bolted to the summit. In my opinion this section was certainly exposed, but no harder than class 3. Guess these things are subjective. 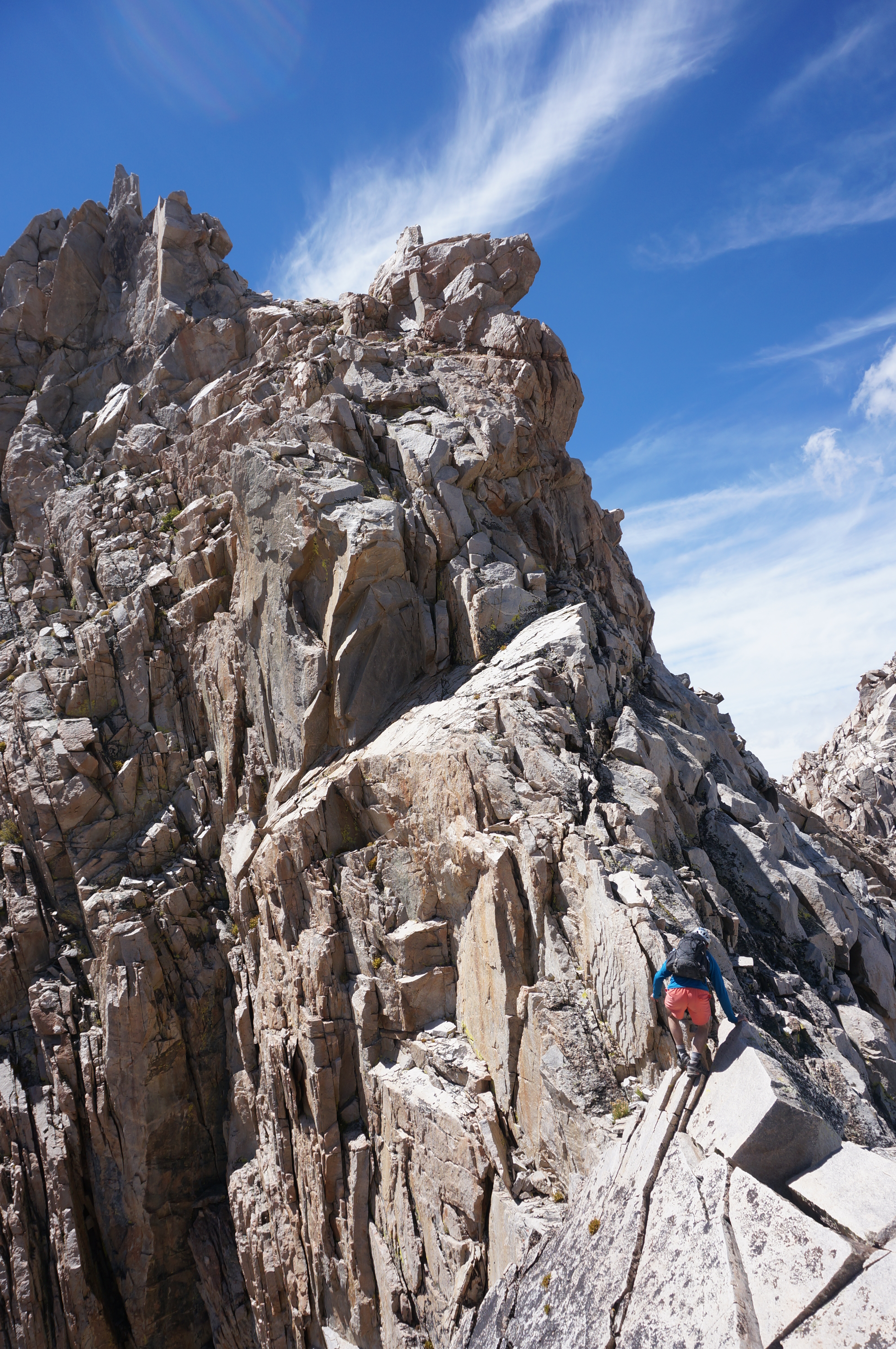 The supposed class 4 finish to the summit 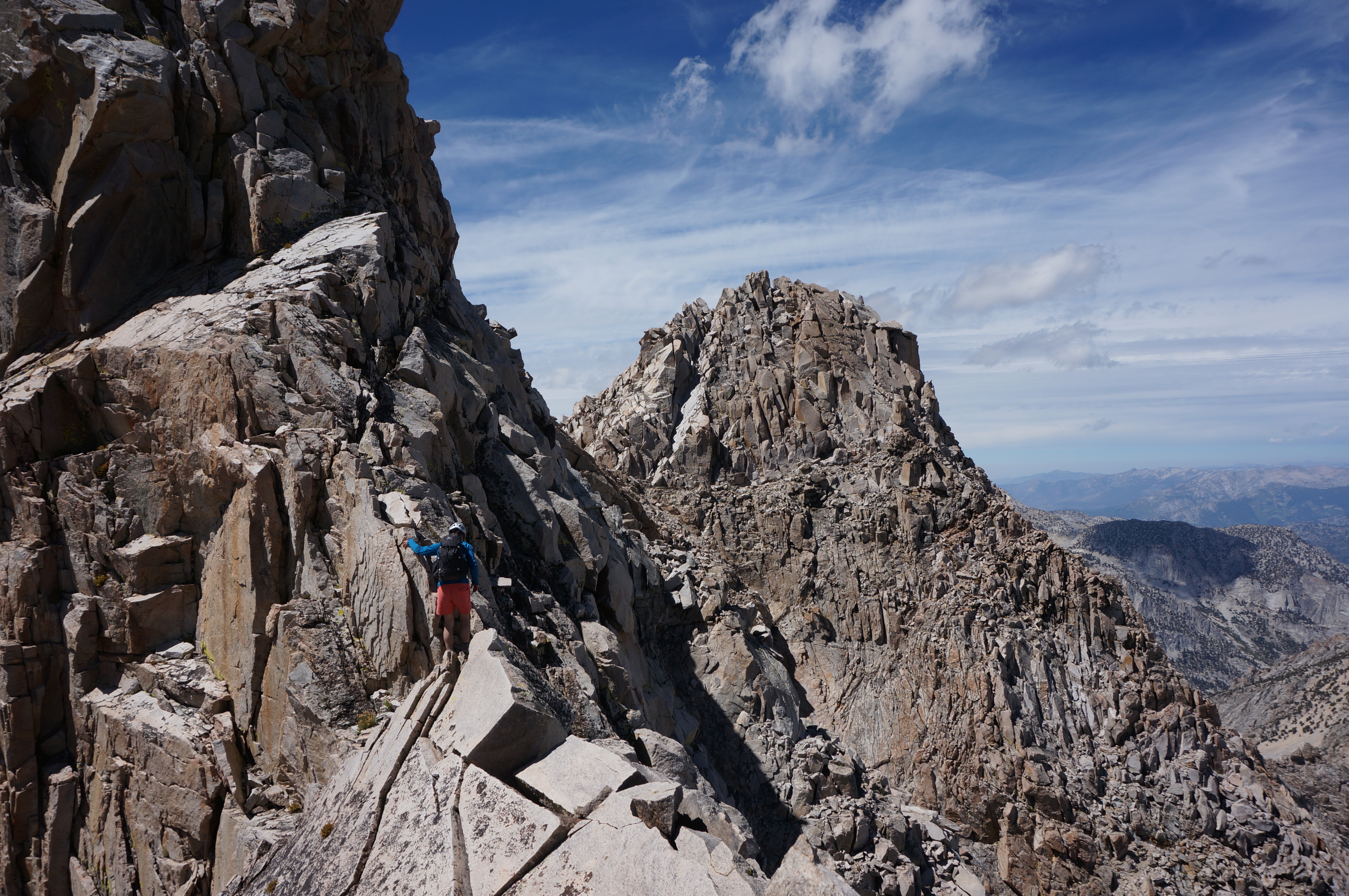 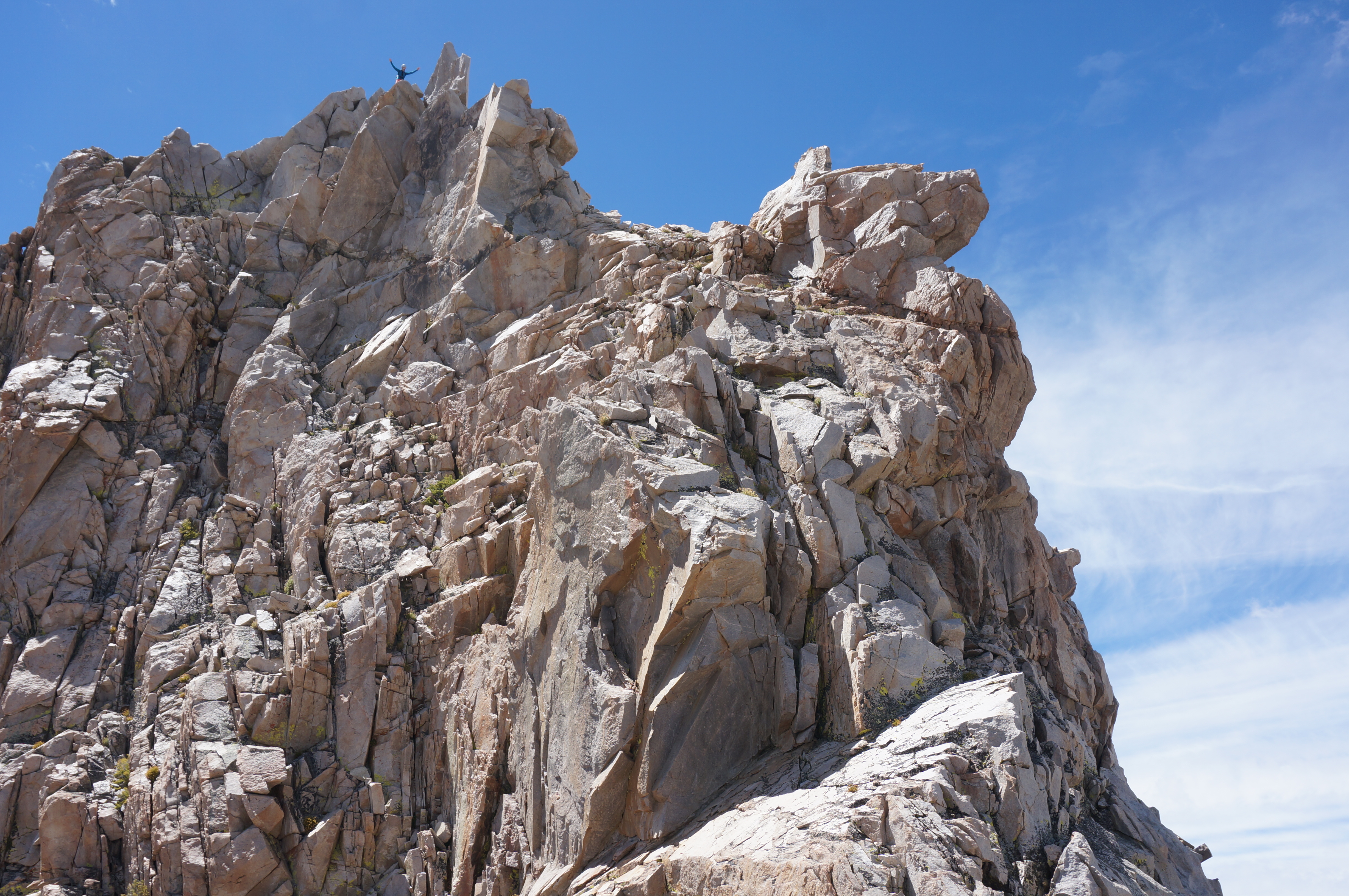 Gil triumphant on the summit

Having spent a fair amount of time negotiating the northeast ridge we didn’t dwell too long on the summit, although we did manage to exuberantly scream into the depths below us to rejoice in our accomplishment, and work through one of the two Coors Lights I had brought along, the other had fatefully sprung a leak about 200’ from the summit, forcing me to drink half and dump the rest before the final push to the summit. Perhaps the reason I was willing to working my way to the summit.

https://www.360cities.net/image/deerhor ... california
Summit panorama, sadly the only time I took the time to break out the pano gear

The descent down the northeast buttress was certainly easier along the class 3 route, until it bottomed out into some severely tedious scree before even more endless talus than the ascent. I’m not sure which ascent route I would favor given this reality, likely the ridge route in honesty, unless the vaguely more technical terrain really puts you off. 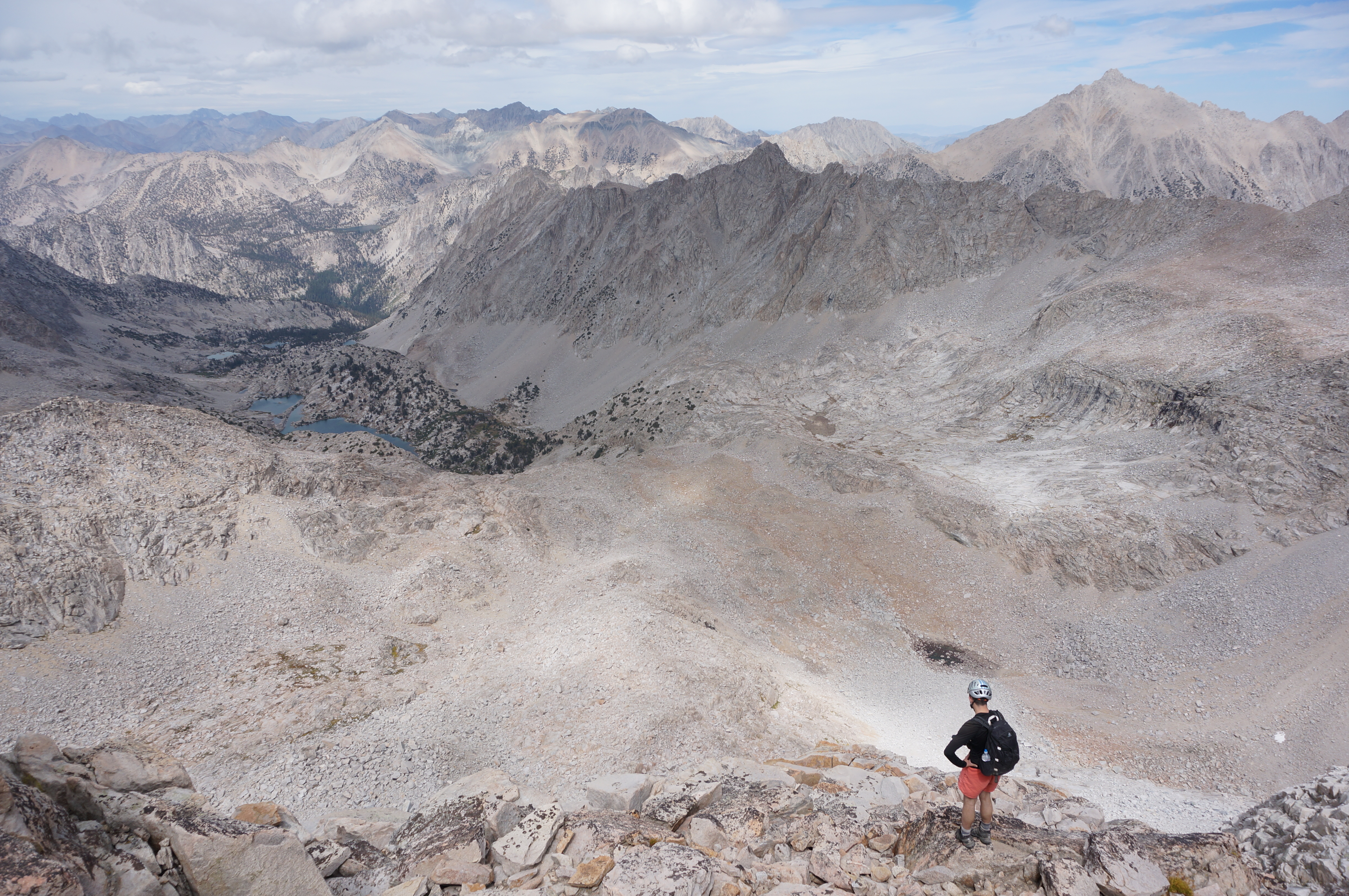 Surveying the broad descent awaiting us.

Getting back onto the gentle slabs at the farthest Vidette Lake, we again hit our stride making quick work of the descent to the trail. However we started feeling the day’s length on the climb to Bullfrog Lake as the sun started its descent and we contemplated the climb back up to Kearsarge awaiting us. Thankfully we had plenty of opportunity to take breaks here and there in the name of photo-ops. 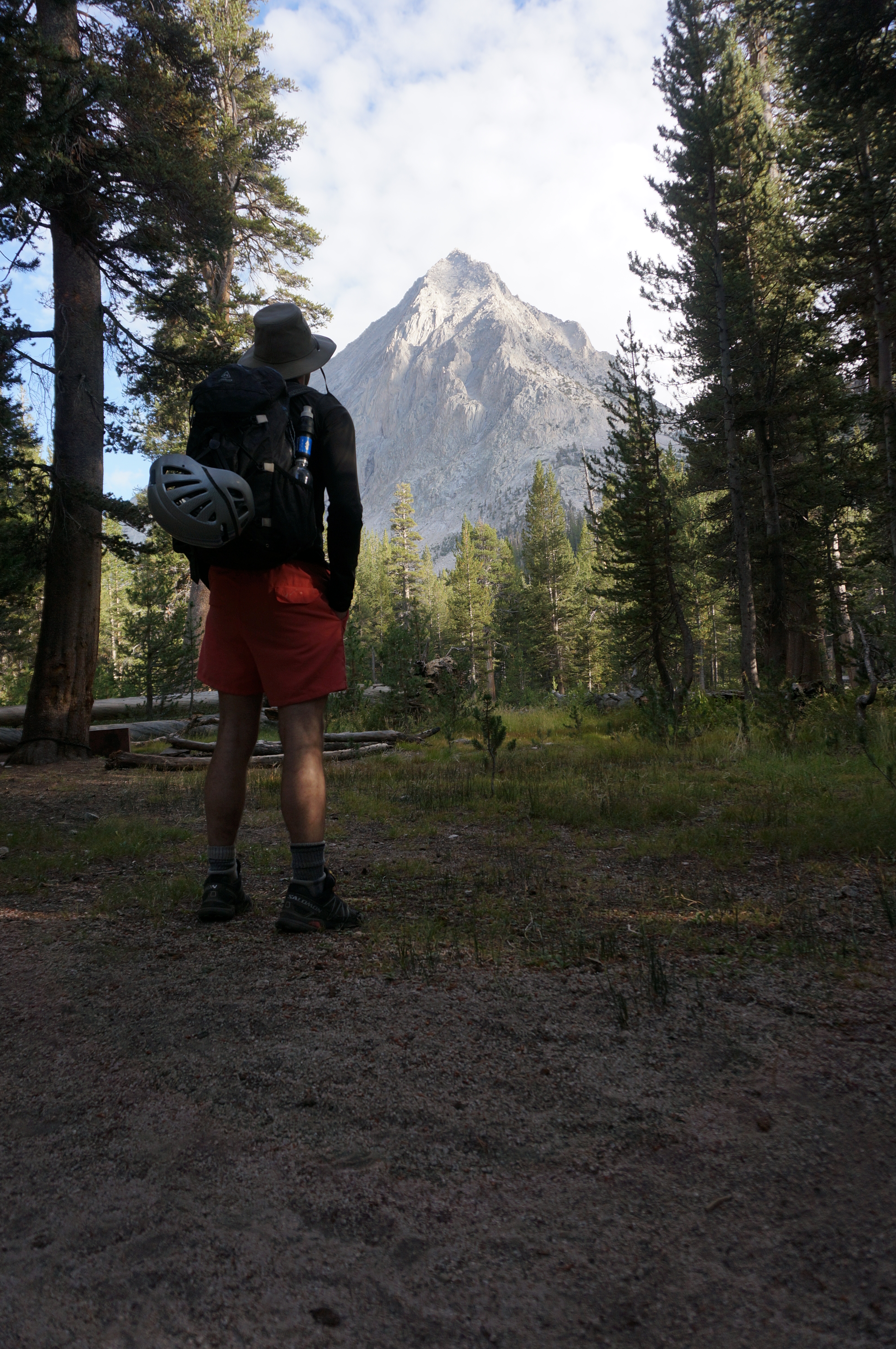 Perhaps a day hike to this peak would have been easier? Only 20 miles next time. 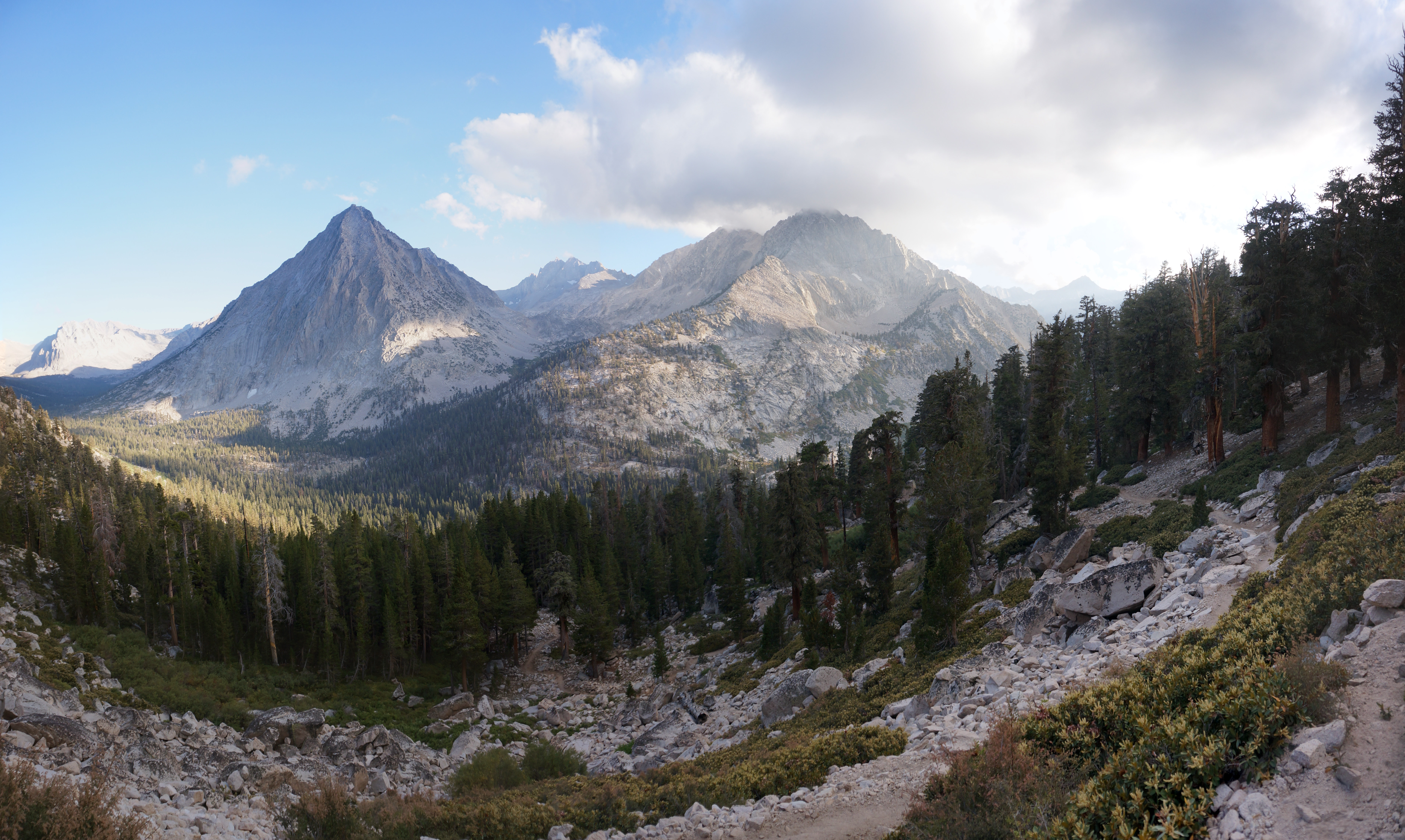 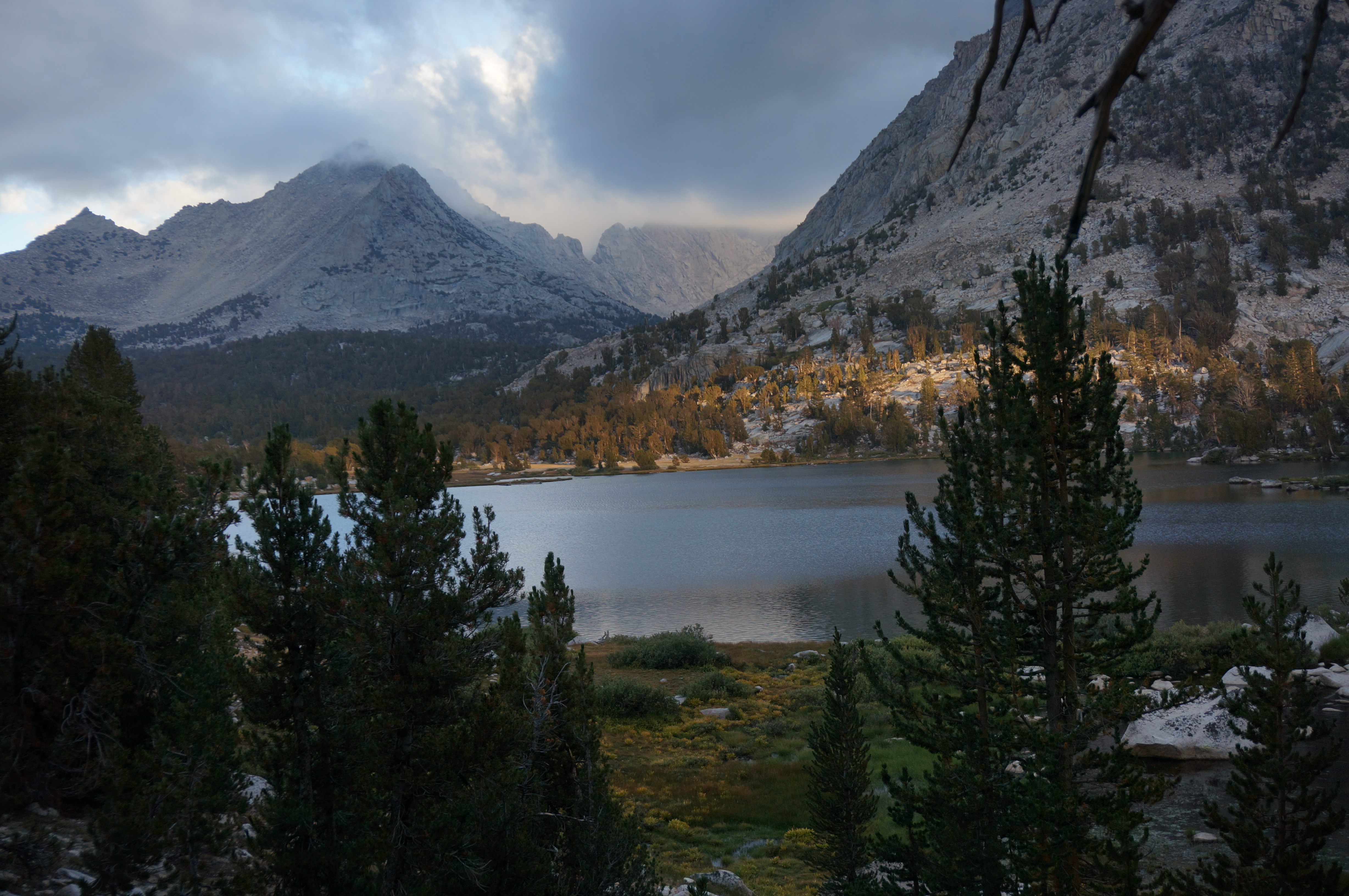 The clouds rolled in, thankfully giving us no trouble other than some fog near Kearsarge Pass

The final tally? 24 miles, many more smiles, 9035’ gained and lost, and around a dozen moves where I questioned “this is Class 3?”, 18.5 hours car to car, and another 3.5 hours in the car on the way home. Altogether well worth the effort, and what I look back on as one of my favorite days in my favorite range.

If anyone is looking for a track of my route, I posted the majority over on Peakbagger: http://www.peakbagger.com/climber/ascen ... aid=705434 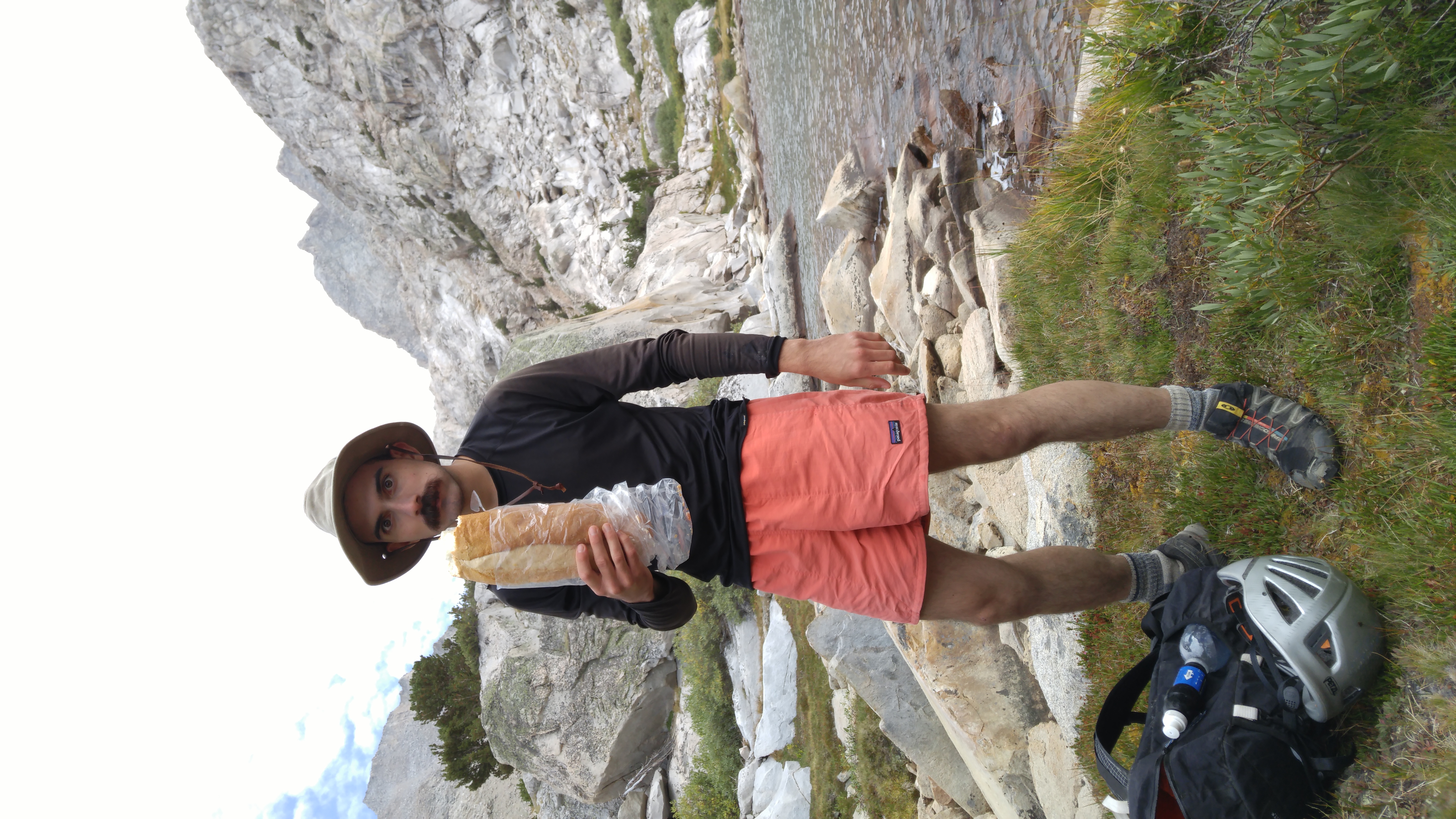 A few bites off a loaf of French bread should be good for a 10,000 calorie burn day, right? Gil is a madman.

Great climb and hike. Granted I'm just looking at your photos, but that last bit looks kinda 4th-ish from my seat. Then again, I'm 5'10" and not 6'4". Spectacular finish to be sure.
Since my fishing (etc.) website is still down, you can be distracted by geology stuff at: http://www.fresnostate.edu/csm/ees/facu ... ayshi.html" onclick="window.open(this.href);return false;
Top

I rarely read TRs but yours was one I greatly enjoyed. Nice work.

Ha! I hear great things about that mountain from someone I hike with a lot and I know that guy with the loaf of bread. You and I are the same height. Nice pics, as usual!