Topics related to peak bagging, rock climbing and bouldering in the foothills and high country of the Sierra Nevada. Be sure to also check out the Information Booth forum category to learn from / see if you can contribute to a profile for High Sierra 13'ers, 14'ers and cross country passes.
Post Reply
11 posts

I got just what the doctor ordered this past weekend and left it all for a trip up a mountain that’s been a goal of mine for altogether too long. It didn’t take long for me to selectively forget the misery and exhaustion associated with such a venture, so I’m looking back on it fondly wishing I could go back as I write this.

We started late afternoon on Friday out of Onion Valley, the jaunt up Kearsarge Pass waking up my long-neglected mountain legs and providing us a view out to our ultimate goal: the east ridge of Mt. Brewer. 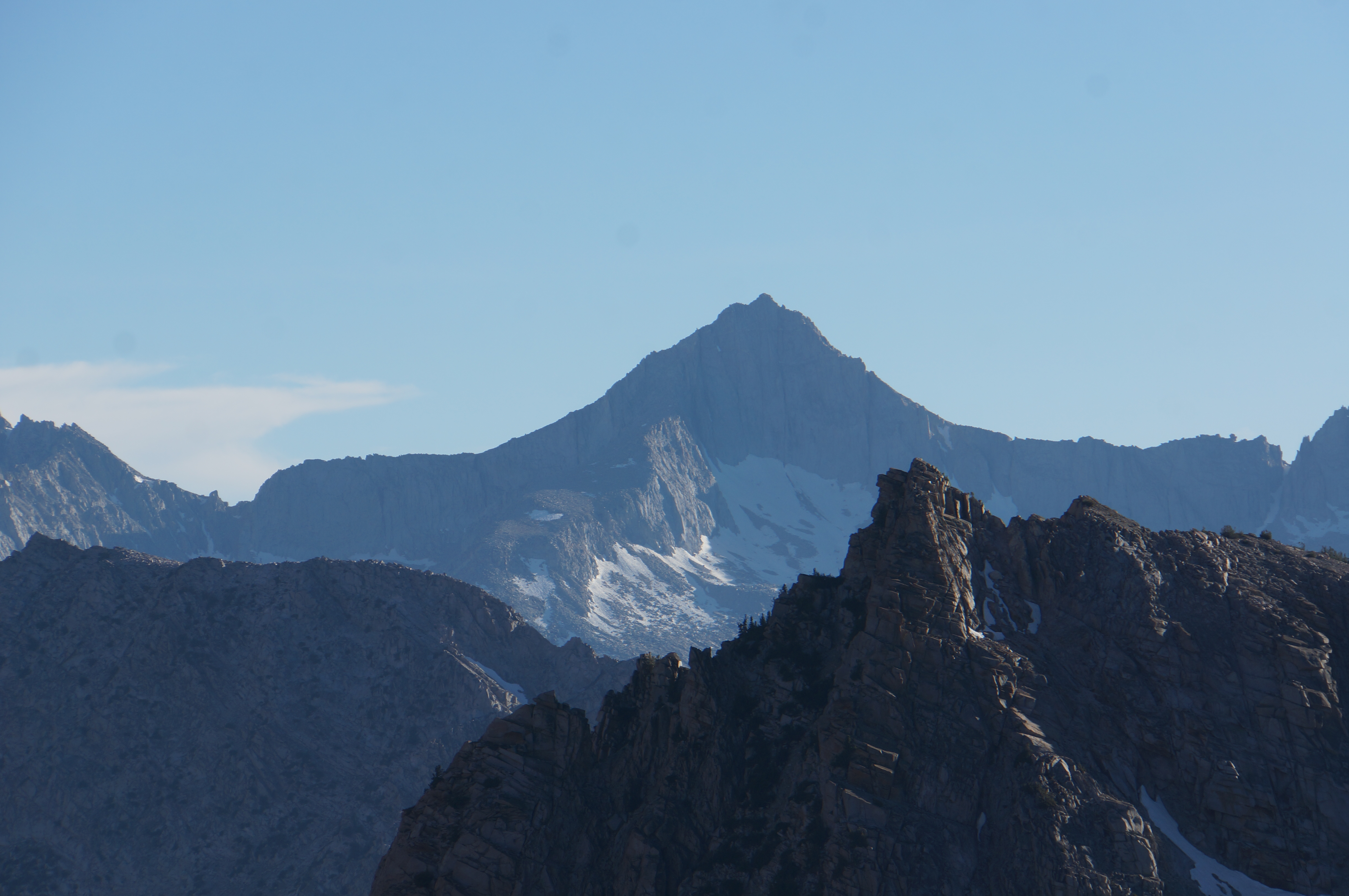 The sight of Brewer from the Sierra Crest has lured me in too many times, I had to see it up close

Making our way down through the basin we learned the basis for the naming of Bullfrog Lake, as we witnessed a constant parade of jumping frogs breaking the surface trying to nab the swarms of mosquitos and other bugs. We cheered them on with vigor. 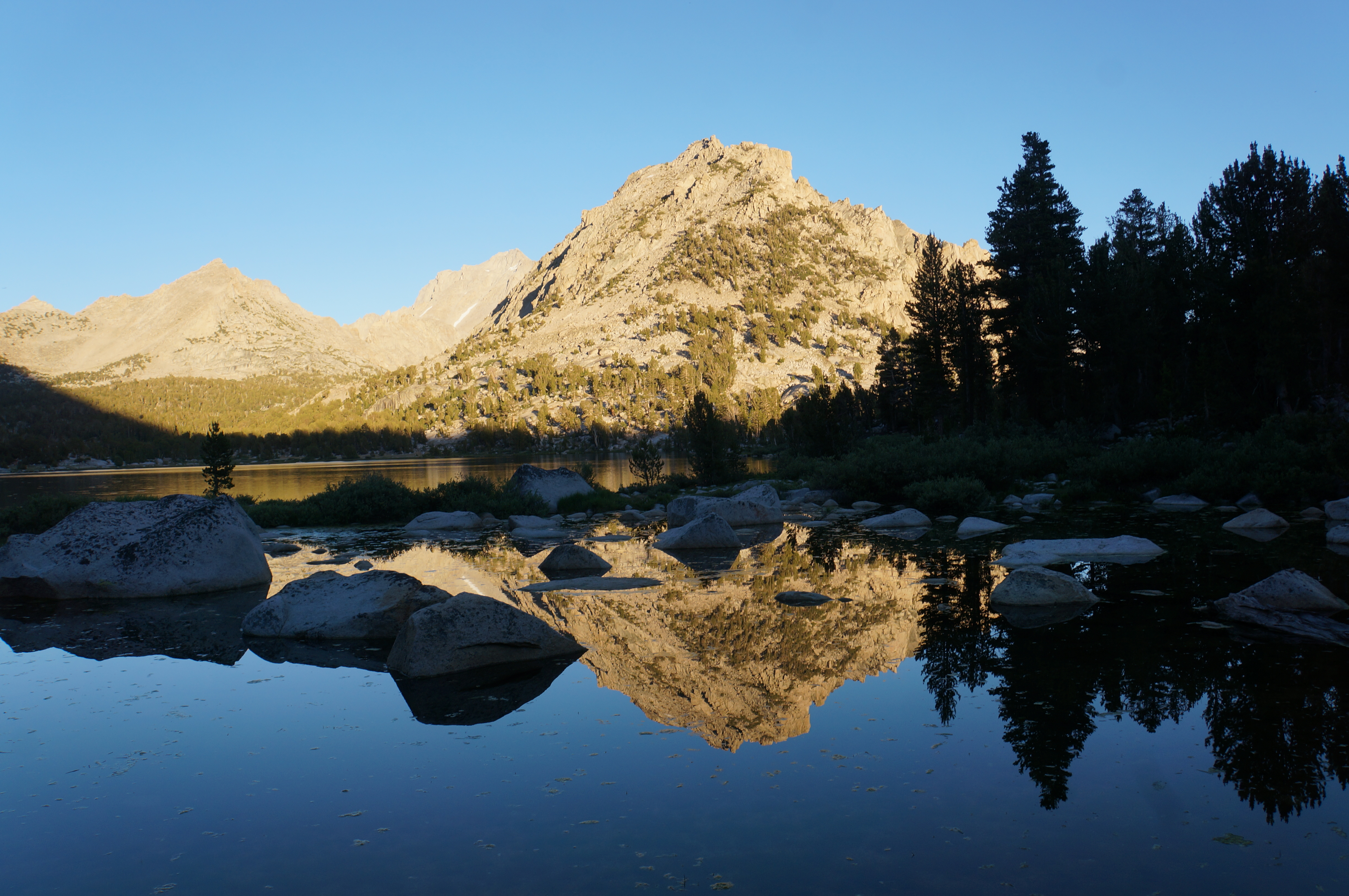 Despite the menacing swarms of mosquitos, Bullfrog Lake had a beautiful and peaceful quality Friday night

Dropping down onto the JMT we were greeted with views I fondly remember from three summers ago as the sun set and delivered a great show. 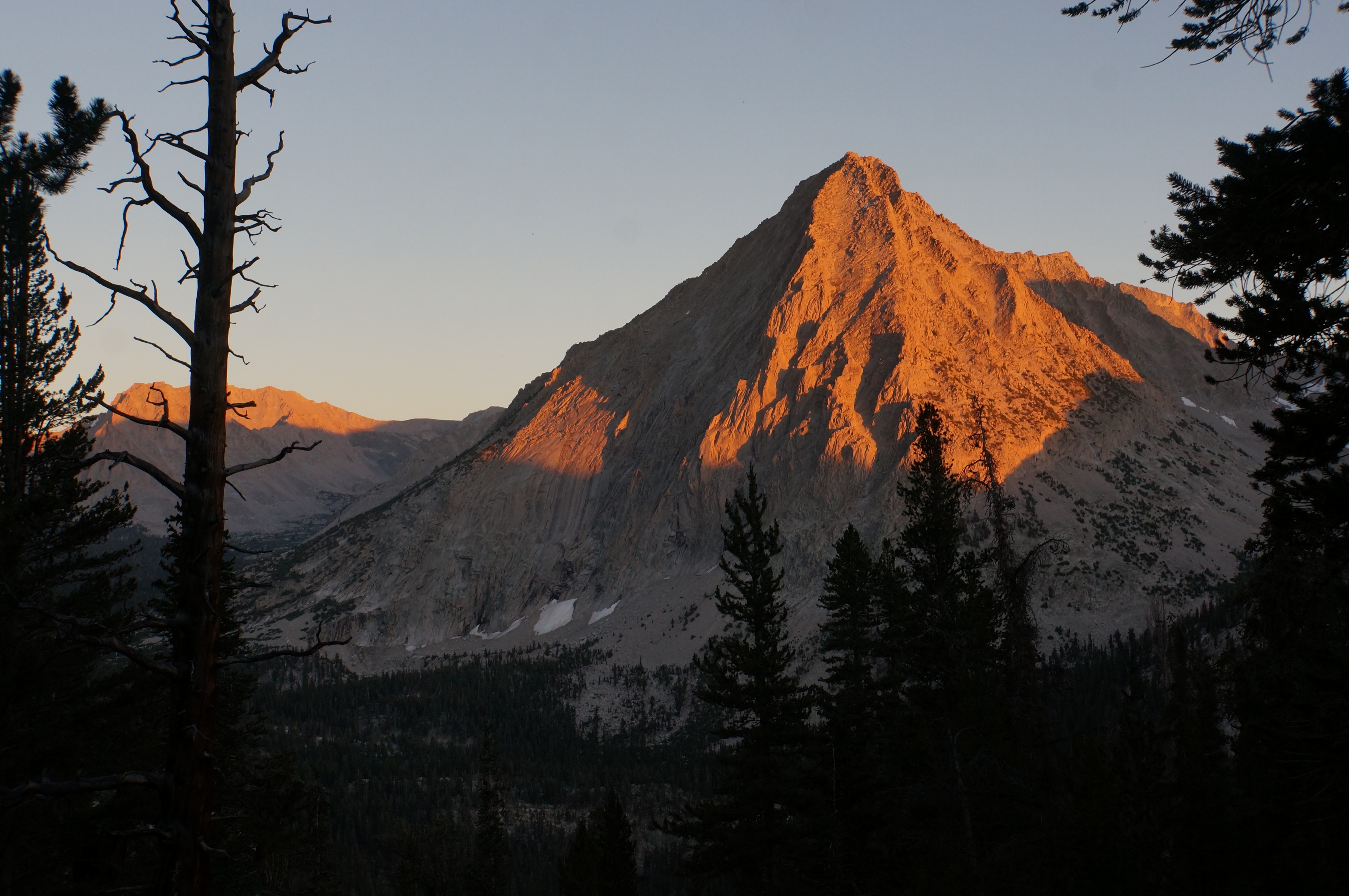 We spent the night under the stars near Vidette Meadow, frantically passing on our first choice as we tried to outrun a vicious horde of buzzing winged bloodsuckers. Thankfully we escaped and made our way to sleep shortly after a quick dinner, knowing the next day would be a big one. 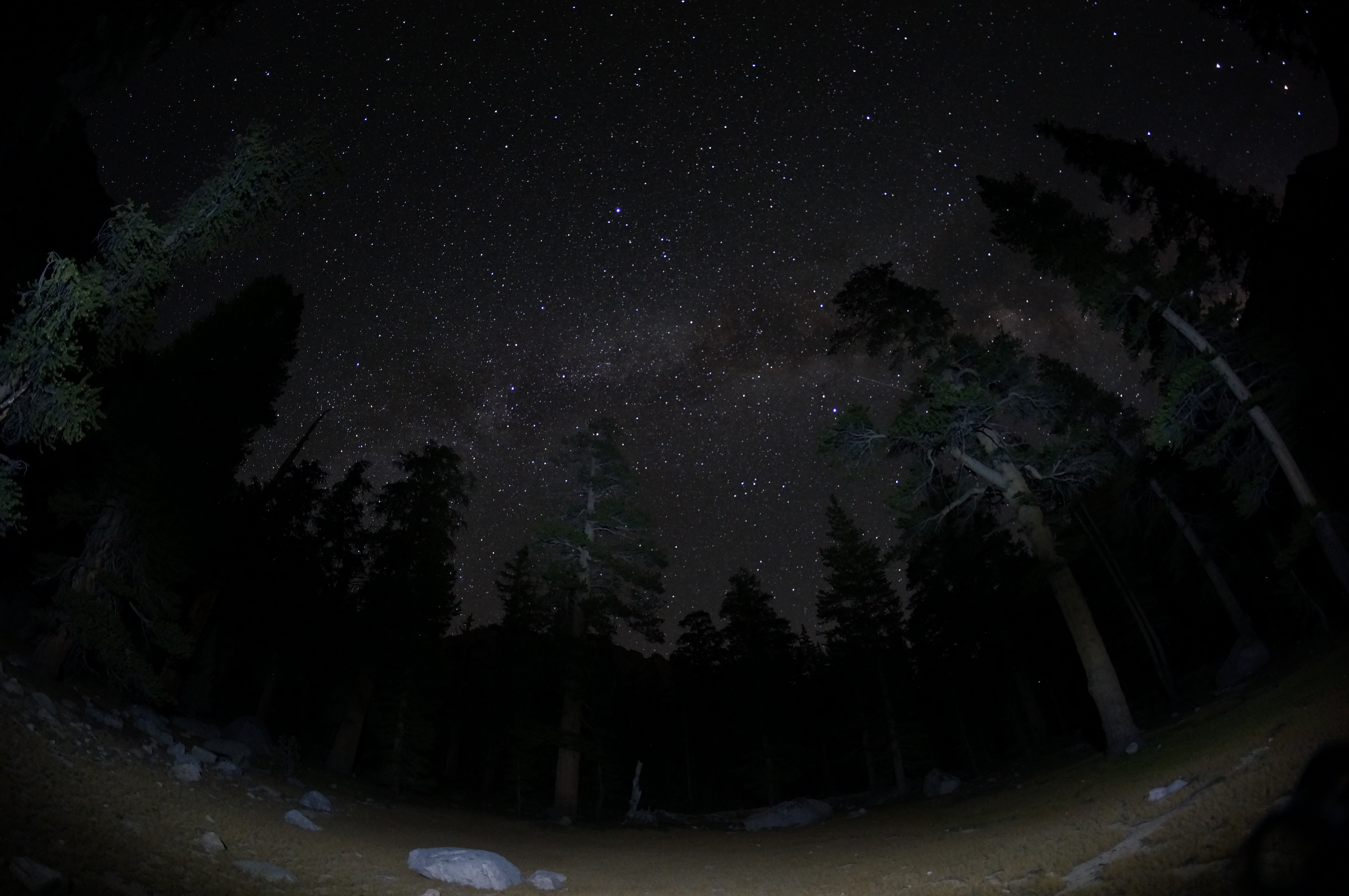 Who needs a tent when you have a roof of stars overhead?

We made quick work Saturday ascending to East Lake, first dropping to Junction Meadow and fording a knee-high Bubbs Creek, then slamming the three trail miles up to a new and sublimely beautiful spot for me at East Lake. Dropping our overnight gear we headed up Ouzel Creek toward the east ridge without too much difficulty, though as the day moved on, the heat and elevation started raging, and gentle slabs turned to talus scrambling, we slowed down a bit.

With views like this, I’m not sure why we climb anyway. Maybe to escape the mosquitos?

The East Ridge of Mt. Brewer

There was some sun cup/penitente action on either side of the notch, but nothing too difficult to avoid

We caught the notch around 2:30 and were on the summit by 3:00, a full two hours after I had expected. No matter, the skies were only marred by one resilient tiny cloud near the Palisades and the expansive views were incredible. We both grabbed our summit brews and celebrated a successful venture up another classic Sierra peak. 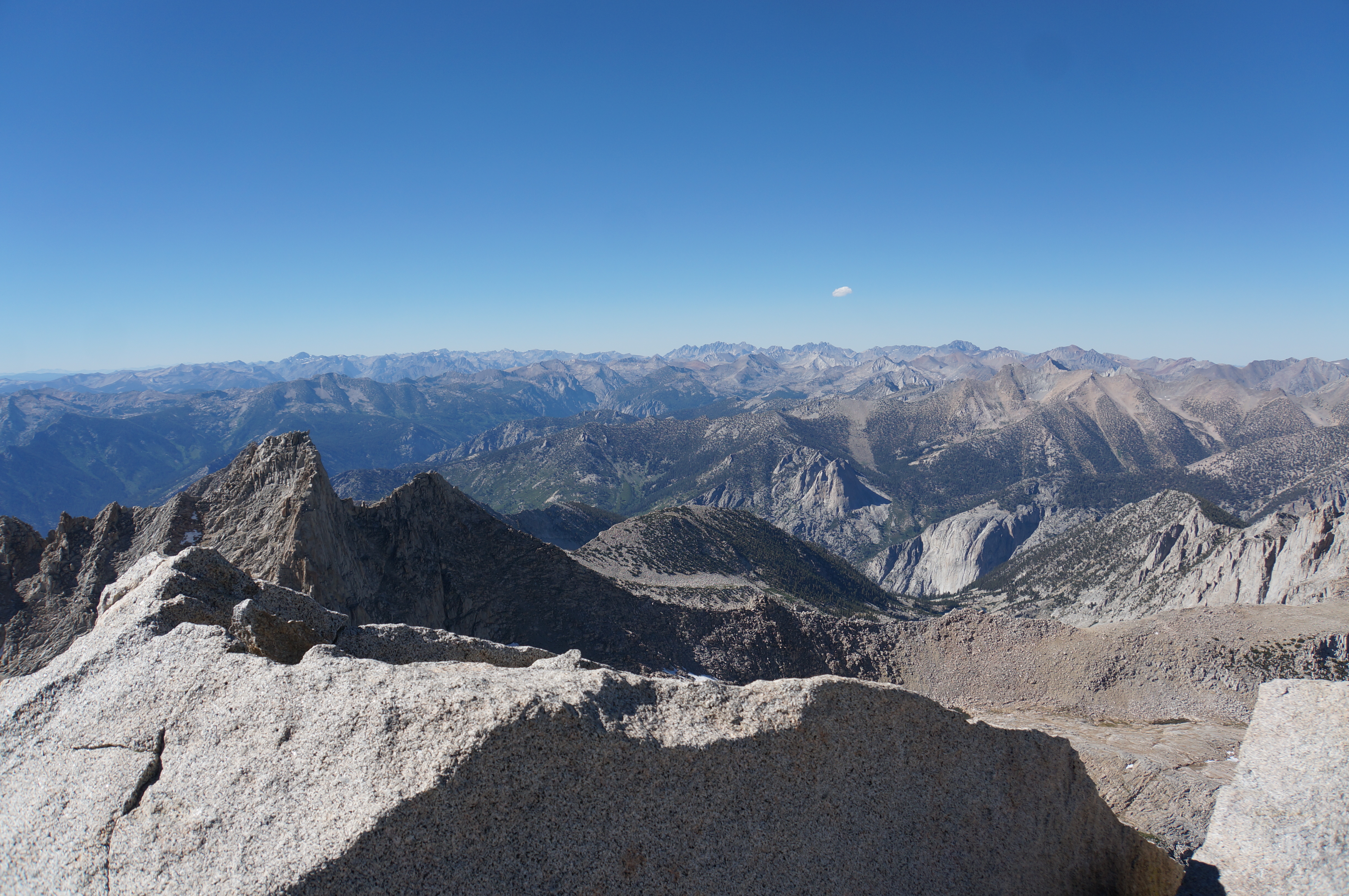 Watch out, you might be next Palisades. Or you, Goddard 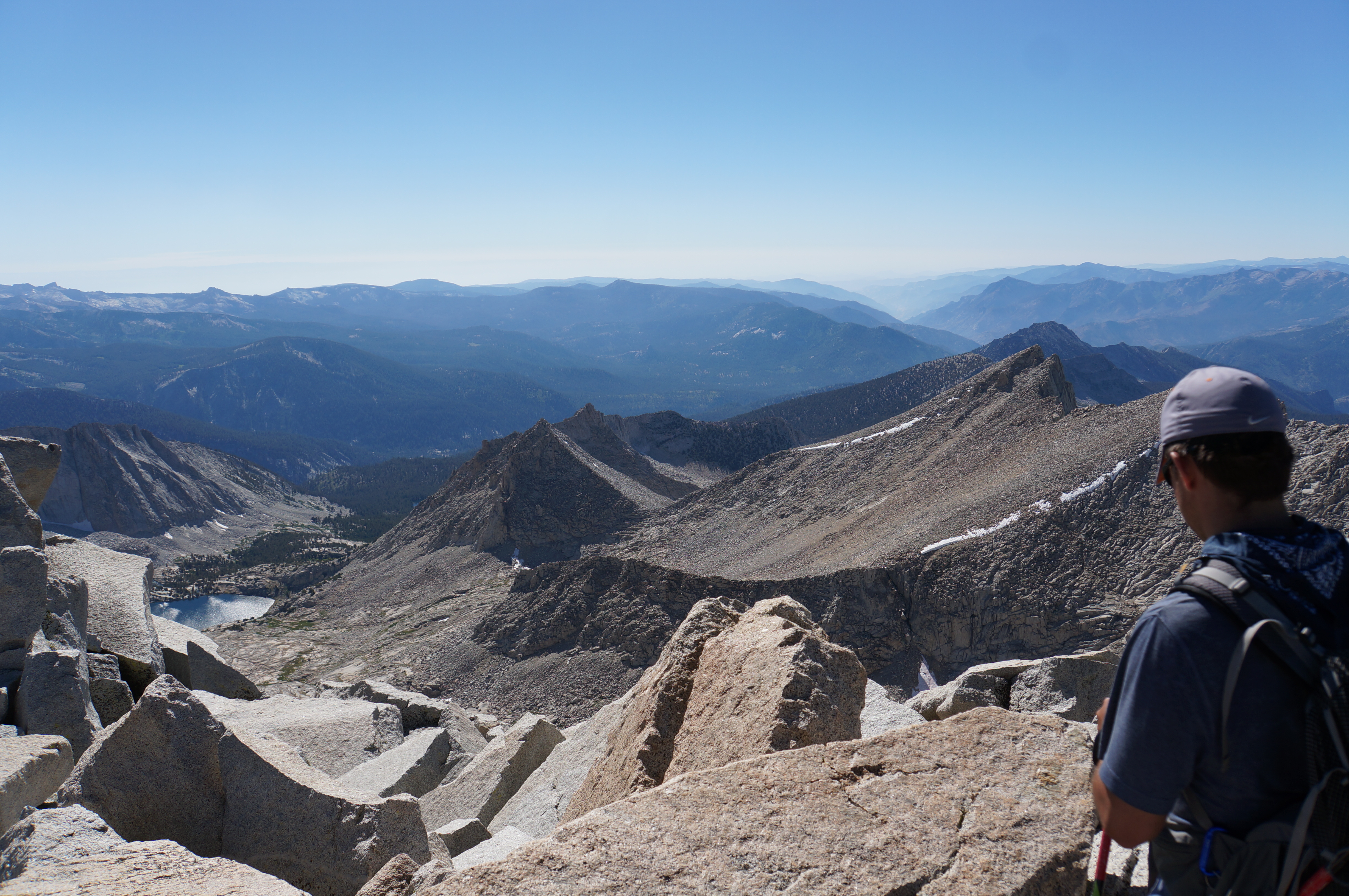 Had some fun listing summits, seemed like every one in the world was within view

Having carried a rod and some new lures all the way out, I was hopeful to get down to see what luck I might have in the lake that night, but it wasn’t meant to be. We dallied a bit on the way down, beat from the day, and turned into camp after the sun. We were fortunate enough to have the lake all to ourselves as we ate some freeze-dried delicacies and did some star gazing, but eventually gave way to some much needed rest…again under the cover of nothing but alpine treetops and celestial ceilings. 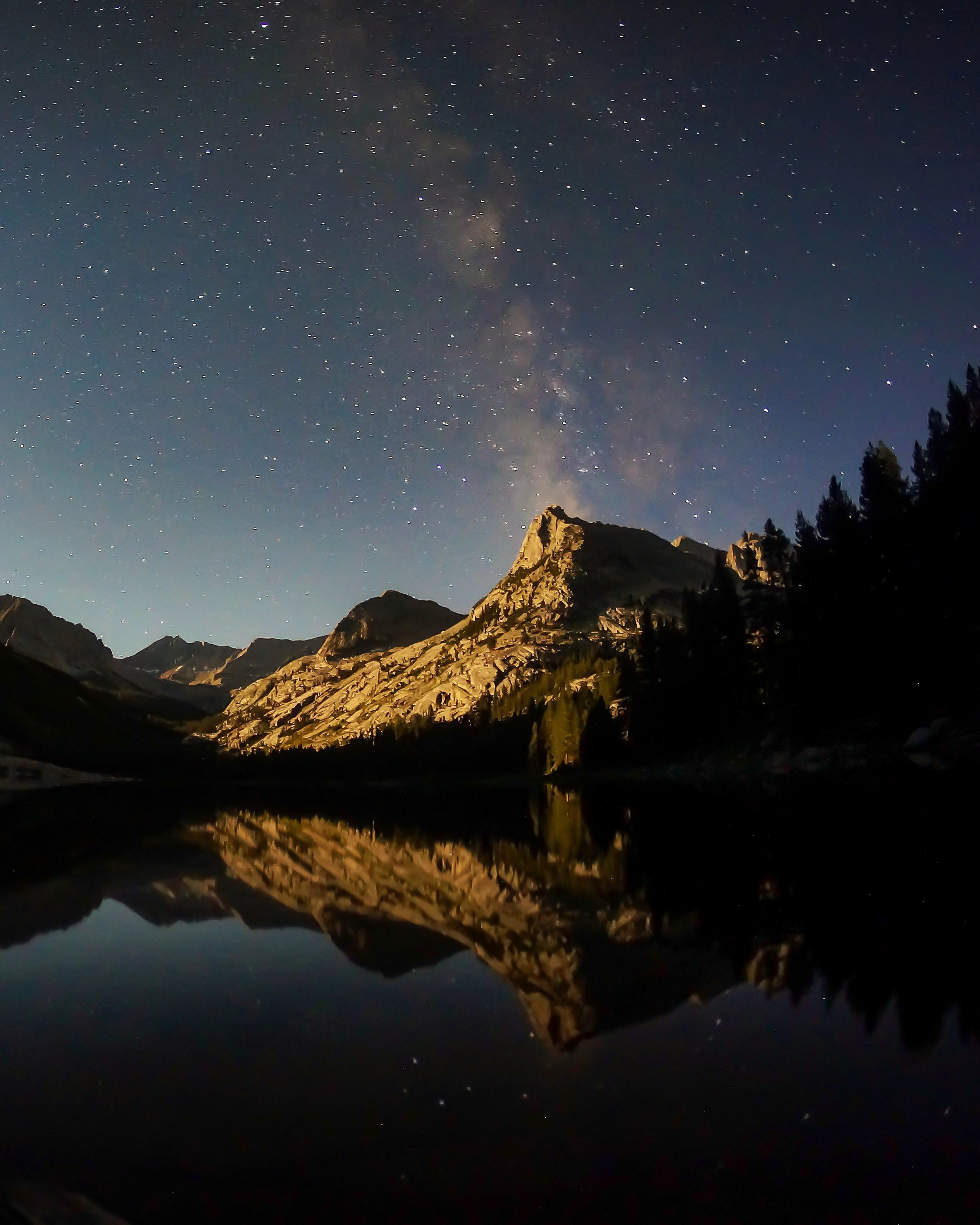 The moon chased away the Milky Way, but both gave a good show for a bit

The next day we packed up and made the long trek back to civilization, considering ourselves impressive specimens until we got a reality check from a fastpacker near the JMT junction that started her day at Whitney Portal, and two trailrunners near Vidette Meadow day tripping from Onion Valley. Those people are clearly abnormal, so I’ll stick to my assessment of a tough but great weekend out in the Sierra. 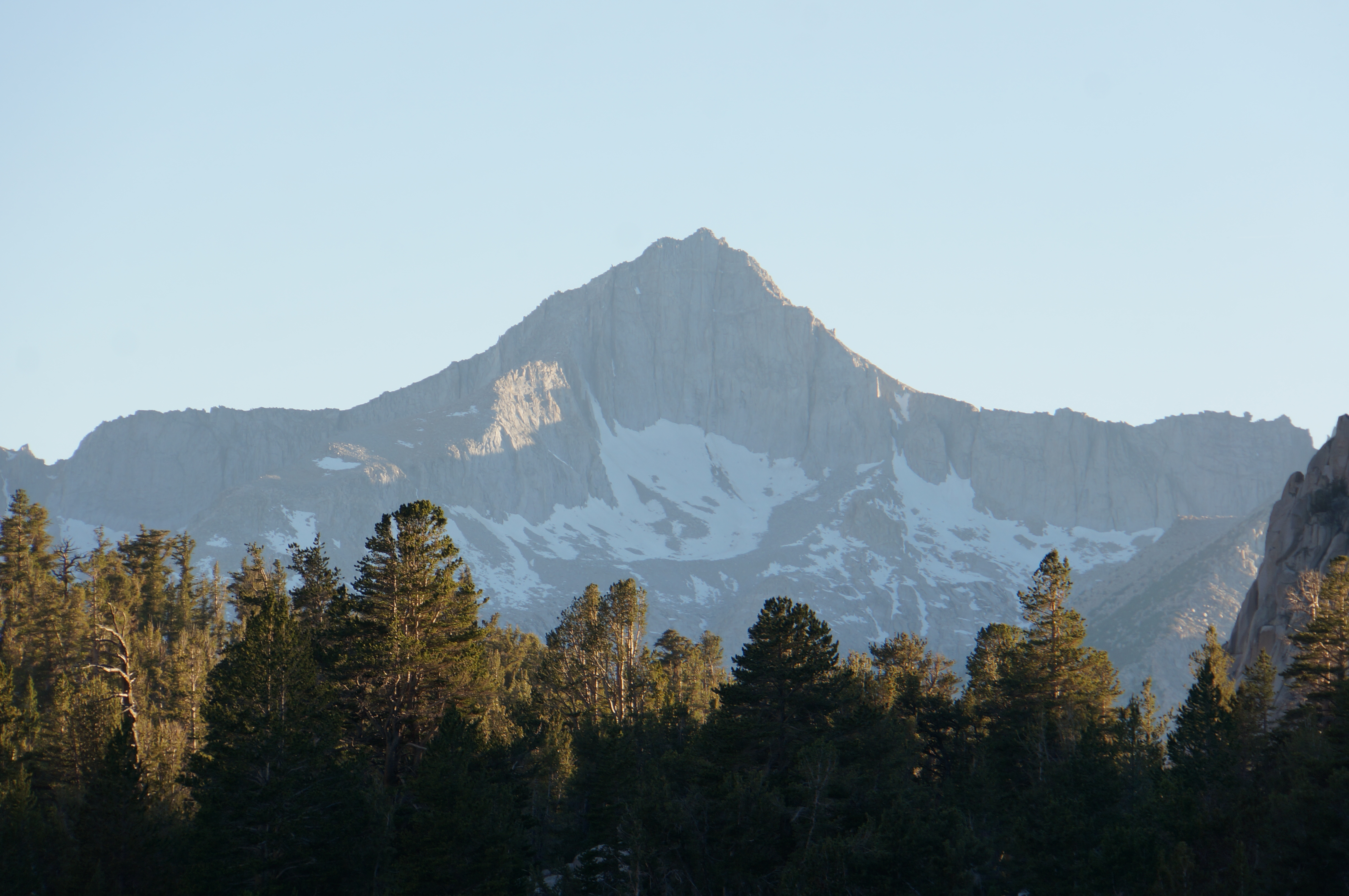 Thanks for a great weekend Brewer

The second to last photo is amazing! Looks like a fun trip, thanks for the report.
Top

Incredible stuff. Nothing beats a summit brew!! I absolutely love the night shots as well, incredible work.
"The mountains are calling, but can't find my phone"

Amazing photos and great TR. Congrats on your summit of Brewer.
Top

Sweet report and photos. Brewer is such a classic Sierra peak. I'm glad the weather was nice so you had such quality views, too. My visit to Brewer 37 years ago was quite memorable, for it was early season (May) and almost entirely snow covered above East Lake (the only part not covered with snow was the final south slope). Some of the stream crossings were adventurous back then too. It was a weekender for me late in the spring term of my junior year at Berkeley, but I was so tired upon my return (got back at about 3 am) I didn't make it to class that Monday.

On a clear day from here (Fresno), Brewer is one of the stand outs on the skyline. It is a beautiful peak from wherever you see it. So many great memories come back from looking at your report. Thanks for posting it.
Since my fishing (etc.) website is still down, you can be distracted by geology stuff at: http://www.fresnostate.edu/csm/ees/facu ... ayshi.html" onclick="window.open(this.href);return false;
Top

There is a pic of a lake from the peak looking west. What lake is it?
Top

I believe that lake is South Guard Lake.
Since my fishing (etc.) website is still down, you can be distracted by geology stuff at: http://www.fresnostate.edu/csm/ees/facu ... ayshi.html" onclick="window.open(this.href);return false;
Top

Let me join the chorus of those saying how wonderful your photos are.
Top

Thanks everyone for the nice comments! I do enjoy writing these things up when I have time, which isn't as often as I'd like.

I did have time to stitch together a summit panorama, you can find that at the link below since I don't think 360 Cities supports BBCode:
https://www.360cities.net/image/summit- ... california

@Cross Country, the lake looking to the South is South Guard Lake, but the photo looking back to Kings Canyon and the Central Valley to the west with my buddy in the frame you can glimpse Big Brewer Lake sticking out on the left side, not sure which photo you were referencing. You can view both lakes in the panorama, South Guard is on the left of Andrey and the summit block, Big Brewer is on the right.
Top
Post Reply
11 posts