Topics related to peak bagging, rock climbing and bouldering in the foothills and high country of the Sierra Nevada. Be sure to also check out the Information Booth forum category to learn from / see if you can contribute to a profile for High Sierra 13'ers, 14'ers and cross country passes.
Post Reply
13 posts

Following my pattern of late, I chose to climb 13,531’ Cloudripper due to its proximity to a trailhead that I hadn’t explored as yet, Big Pine North Fork. The epic name also likely triggered something for the deeply repressed death metal-head in me.

In any case, I also invited along a friend with the tempting promise of great views to the Palisade ridgeline which he plans on traversing along with another friend this August. He accepted, but threw a wrench in it by suggesting that it’d be better for him to train on the likes of the 3rd class west chute of the mountain, so we instead headed up to South Lake Friday night to a trailhead that I recall from a failed trip on the backside of Mt. Sill last year.

No matter, we left the Willow campground after a fun night experimenting with light trail shots and fermented beverages. 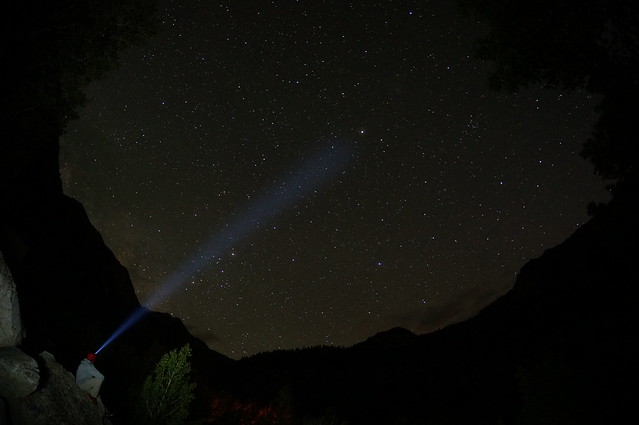 An early wakeup call had us at the Bishop Pass trailhead around 5am, and up to the split on the trail to Chocolate Lakes just in time to spot the ribbon of snow leading up the chute that I was fearful of. Thankfully logic prevailed and we chalked it up as a ~3.5mile warmup to the real climb which was obviously now an out-and-back on the north slopes via Green Lake. 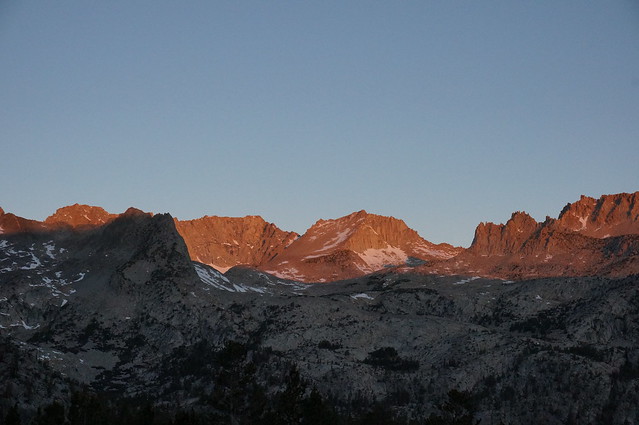 Morning alpenglow on the Thompson Ridge from Bishop Pass Trail

Leaving from Parchers a little before 7 we utilized our pre-warmed quads to power up the steeply graded trail toward Brown Lake. After a hearty rock-skipping challenge at the aptly-named lake we continued up over Green Lake where the views opened up above timberline to what we thought was Cloudripper staring back at us. Instead it was Peak 13,374’ that we had to skirt before our objective peak, which hid bashfully behind out of view. 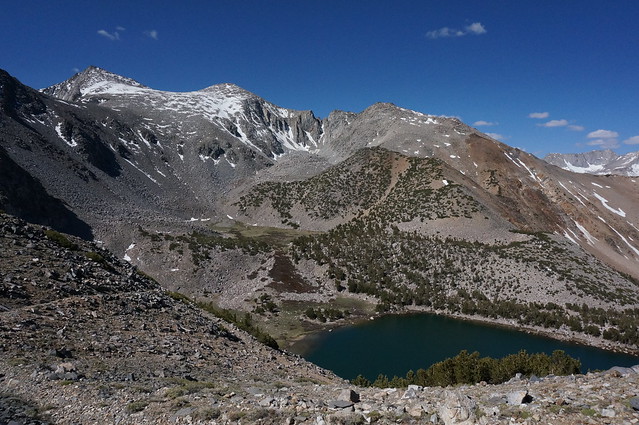 Green Lake with Peak 13,374’ and its snowy North slopes above left

Rounding a nice slope around the backside of the visibly painful sandy scree slope as we left the trail toward the south, we then entered the snow slope to gain the ridge of Peak 13,374’. It was tough work alternating between short stretches of rock-hopping to avoid postholing, and giving in to the snow hoping to find flotation on hardened snow. Success was found nearly 60% of the time, with the remainder leaving us cussing while struggling out of knee-to-hip-deep footholds. 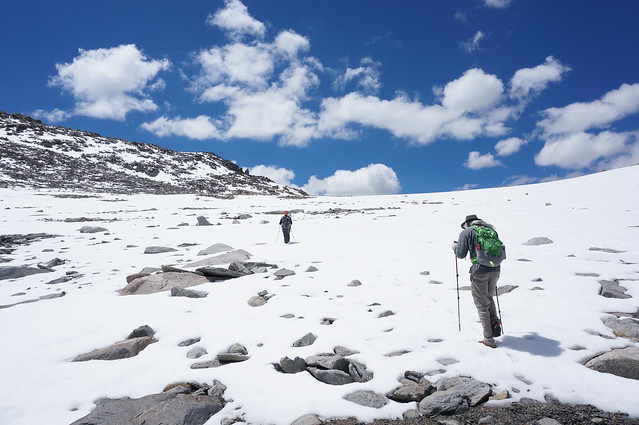 We rounded the ridgeline at about 13,300’ only to drop back down to 13,000’ to get onto the summit slopes of Cloudripper. More snow slopes and postholing brought us to some fun low-class 3 summit rocks and one of the more memorable summits that I can recall. Sweeping vistas across the Palisades had us captivated along with views down to the neighboring valleys and their pristine lakes. I’ll link the spherical pano I took below, as these views couldn’t be contained, at least not with my paltry photo composing skills.
https://www.360cities.net/image/cloudripper-california

The bliss on the summit was short-lived however, as the friendly puffy white clouds that left engaging lighting contrast in the valleys below conglomerated into something more sinister got our hearts pumping again with a few thunderclaps behind the Palisades. 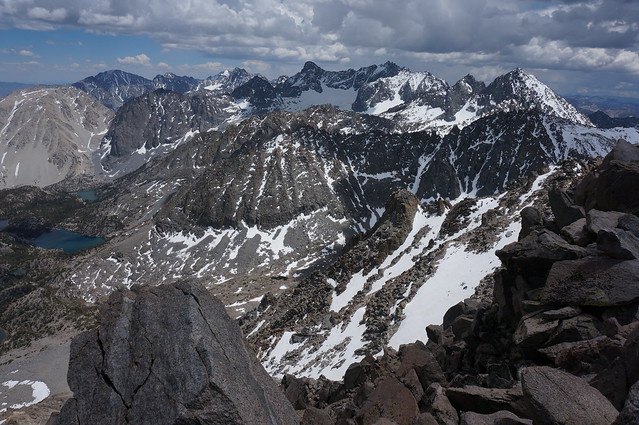 Down the summit rocks, down the snow chute, back up the ridge and down the other snow slope, we were back to pleasant walking while constantly predicting our demise under the sheets of rain that we could see in almost any direction from us. Thankfully our third member is a Russian lucky charm and we avoided the deluge. 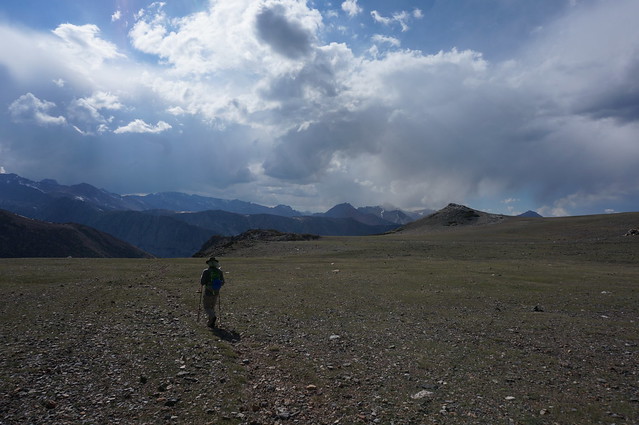 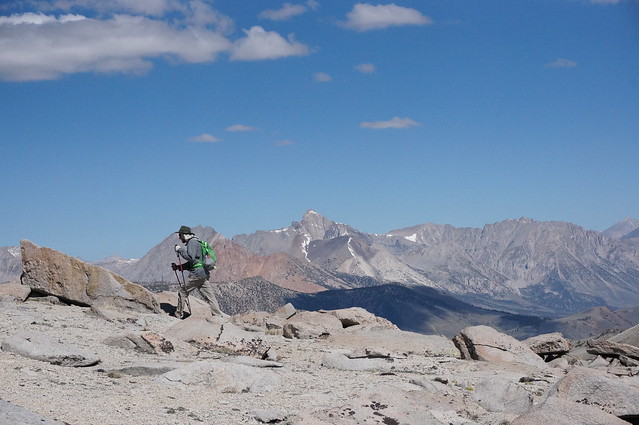 Precipitous Mt. Humphreys in back

Another successful trip in the books, we celebrated with pizza and fermented beverage at a local Bishop eatery before making the daunting drive back to the non-mountains. The sunset was a lovely sendoff. 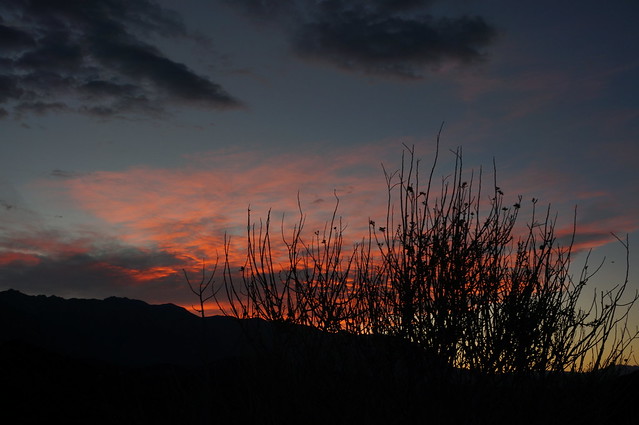 Great photos and thanks for the entertaining write-up. Your 360 panos are amazing! I'm reading their website, any tips on getting started would be very much appreciated:)

Bluewater wrote:Great photos and thanks for the entertaining write-up. Your 360 panos are amazing! I'm reading their website, any tips on getting started would be very much appreciated:)


Sent from my iPad using Tapatalk

Thanks Bluewater, glad you enjoyed.

As far as the 360's, I wish I could tell you it's easy, but at least at this point it's not and I've been honing my workflow for a while trying to get it done easier and quicker.

The key to capturing the images in order to be able to stitch later in software is to get a panoramic head to mount your camera onto a tripod with so that you can rotate your camera around the lens' nodal point. I have an old Nodal Ninja that I used to use with my point and shoot, their website has some good tutorials for a starting point and they feature some "ultralight" heads that make it feasible to carry into the backcountry.

If you have a point and shoot you're stuck with taking quite a few pictures to stitch later, even with my relatively wide angle camera I had to take ~20-30 pictures or more to capture the whole scene and stitch later, and you run into potential stitching errors if you don't get it set up just right. I just upgraded to an interchangeable system so that I could incorporate a fisheye lens and lower the image count to 6, which aids in capture time as well as editing time later, at the expense of, well, my expense, and to a lesser amount the overall pixel density.

I can give you more info if you'd like as well, I think it's fun and it certainly is a great way to capture the vistas we work so hard for. On the other hand I don't have much competition so far on Google Earth in the Sierra, so maybe it's in my interest to hold onto my monopoly.

Thanks for your recommendations for getting started with the 360 process. I have been making panos using film with up to 24 pxts since the '90s and thankfully in digital format since then, but they are all the 'partial panorama' style. This is the next generation of awesomeness[emoji3]

I haven't made the jump to a DSLR in the backcountry so getting a panoramic head for my P/S will be the next step. Hopefully somebody makes one using titanium or carbon fiber!

Thanks again. This is the best way I've seen so far to capture the feel of the huge Sierra views.

Cool, excellent timing! We're headed up there this weekend, somewhat surprised at how much snow is left. Normally in June, there'd probably be even more, but this was quite a depressing snow year. Would not have expected any snow, now I know to expect at least some. Apart from the snow, how is the hike above Green Lake? Loose and sandy? "Talus-y"? I'm used to that stuff, since anything over Class 3 is above my ability, so I have to find a hiking way up mountains. But it's still not very fun, especially the loose sandy stuff.

Also, your 360's are super cool, it's the closest you can get to seeing what you experience.

Hey cthenn, good timing indeed! You'll have a lot of fun up there and should definitely be good staying class 3 and under. The only real class 3 we had to do was near the summit, and though I can sometimes be a bit apprehensive around class 3 rock I felt very solid the whole way up.

You'll definitely find some talus to deal with, namely on the way up and down Peak 13,374' and again on the slopes up to the summit. We went around the backside of the first ridge after leaving the trail above Green Lake, and judging by the look of the sandy/scree field on the face of that slope I think it was the right idea, the backside slope was pleasant class 1/minor class 2.

There's a few GPS tracks I was able to find beforehand, let me know if you'd like the one I recorded and I can likely send it along. Otherwise have fun!
Top

A GPS track would be most helpful indeed! Not that there is difficulty in route finding, but retracing a route that avoided some crappy stuff would be appreciated! I do like a little bit of a challenge with Class 3 stuff, so a little taste of it to the summit is just fine by me. Thanks!
Top

Beautiful photos as always, thanks for sharing. I was thinking about going up this one next weekend, but changed my mind for another peak. Now you got me thinking about Cloudripper again!

ExploreABitMore wrote:Beautiful photos as always, thanks for sharing. I was thinking about going up this one next weekend, but changed my mind for another peak. Now you got me thinking about Cloudripper again!

Thanks! What a shame it is that we have to choose between so many spectacular places to spend our weekends huh?

I'll be out of the High Sierra this upcoming weekend with a potential trip up to the very Southern Sierra, but otherwise hoping for big things come next weekend. Mt. Brewer has been beckoning for quite some time.
Top

Well...thanks again for the report and sending me your GPS track, but unfortunately we didn't quite make it to Cloudripper. We settled on bagging "Vagabond Peak", which I believe is the unofficial name for the peak just before Cloudripper. It was our first big, high-elevation climb of the year, and we were definitely not acclimatized to the elevation yet (nor in good hiking shape!). It took us 4.5 hours(!!) just to get to Vagabond, and when I looked over at Cloudripper, my heart sank. Realizing we'd have to go down 400', then climb up 500', THEN back down 500' and up 400' just to get back to where we were standing, I said f*** that! It turned out to be the right choice, as it was a VERY long day, and we were getting pretty sloppy by the time we got back to the trailhead. Last thing I wanted was to roll an ankle or wrench my knee at the start of the summer hiking season.

Oh well...maybe we'll come back some day, and next time I'll be more mentally prepared to have to go up and over another peak just to get to where we want to go. It was disappointing, because this would have probably been one of the easiest 13,500-foot peaks to get to. Nothing was steep or technical at all, and it should have been a relatively easy day. Still, we got well up over 13,000', and did get a minor peak, so wasn't all bad. Besides, nothing beats getting out into the mountains!