Topics related to peak bagging, rock climbing and bouldering in the foothills and high country of the Sierra Nevada. Be sure to also check out the Information Booth forum category to learn from / see if you can contribute to a profile for High Sierra 13'ers, 14'ers and cross country passes.
Post Reply
15 posts

By the way, as we were painstakingly making our way back down the final 400 to the notch (where we'd have lunch), this kid and his father came charging right up the middle. Ice axes flying & crampons churning in perfect synchronicity, all the while moving in tandem very fast - absolute naturals. (They had all the necessary safety equipment, but didn't use rope or belay for that particular section.) 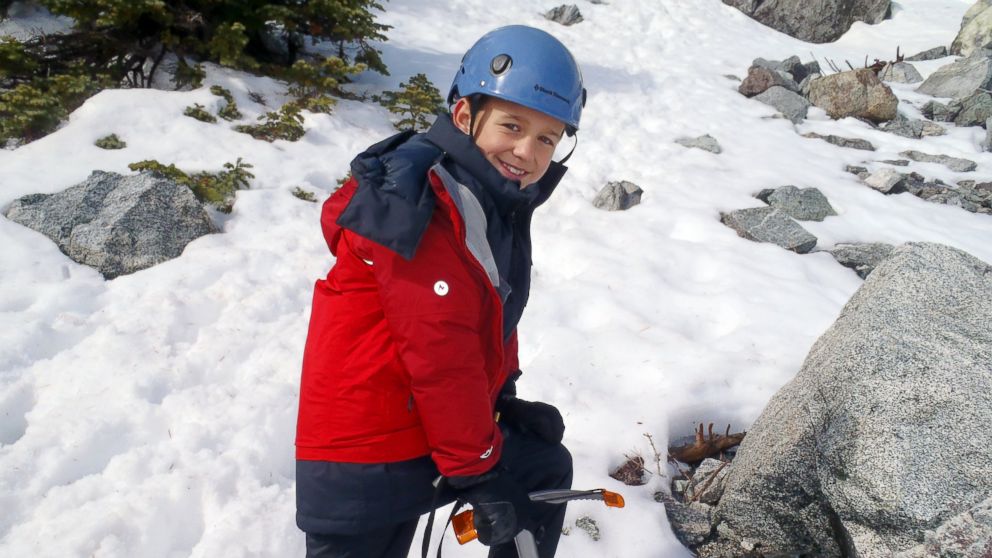 Later, when we were re-assembling at Iceberg, putting away our crampons, ice axes, etc, they came glissading down the gully and stopped by us to do the same thing. I had originally thought the boy might be 12-13, but when I heard him unselfconsciously & joyfully screaming 'wheee' the whole way down like he was on a slide @ a local neighborhood park or Disneyland, I knew he was even younger. (I should mention the kid had perfect form using the ice axe handle like a rear tiller, while holding the head with both hands in such a way as to be able to immediately rotate into a self-arrest if necessary.)

As our group was leaving, I said something to him like "you're going to be a famous mountaineer someday", to which he replied that he already was and then told me his name:

I've seen a couple of young sports prodigies (surfers) over the years who went on to become champions, and it's eery how preternatural they are in their native habitat. This 11 yo kid wasn't being pushed - I told his dad he must be very proud of him, and he chuckled and said he can barely keep up with him.

Wow! It is fun to push hard like you guys did. I also enjoy running into interesting people in the mountains. Those age records are impressive, but at the same time seem very beatable; not that I will try to steer any of my kids to setting any records like that. The description of him enjoying the glissade like an amusement park ride reminds me of a couple of my experiences on Shasta Memorial Day weekend.

On my way up Avalanche Gulch I was entertained by many people who had gotten alpine starts glissading down. One such fellow was squealing with glee as he came to a temporary stop near me. He said he'd never done it before. I nicely suggested he might want to take his crampons off to avoid a nasty tumble or leg injury. Another guy did tumble head over heels in a rough patch. Several were afraid to risk much speed at all and stopped frequently. Better safe than sorry. A few zipped by and some others snowboarded or did a ski tour. Anyway, I went down a different way (west face) and did enjoy it as much as a roller coaster in my own quiet way. Losing 4,000 feet of altitude via a glissade sure takes the edge off a 7,500 foot descent!
Top

Seanr: I also enjoy running into interesting people in the mountains.

Two days before Whitney, I had hiked up to Kearsarge pass on Thurs 5/28 for a little exercise and gain some acclimatization. While I was having lunch by myself (a few inbound PCTers had taken off) and enjoying the perfect day: 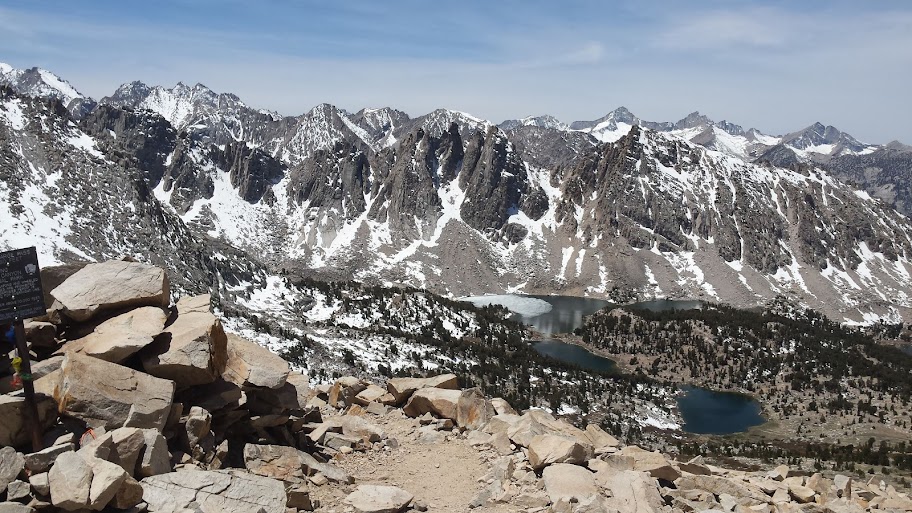 a completely naked PCTer (Sunshine) comes around the corner up from Bullfrog. Without missing a beat, I remarked that "naked hiking day" wasn't until a few more weeks. Then, moments later, one of his friends showed up in the same state of nature. They both dropped their packs and put their clothes on as two more (clothed) members of their group arrived. (Turns out they had jumped in Bullfrog and were so cold they just grabbed their packs and charged the grade in order to warm up.)

We ended up chatting for awhile - the kids were all bright & personable - including some information on backcountry conditions. When I mentioned what I was doing, Sunshine & Legolas said they had climbed Whitney Mon 5/25 (ie after the weekend snow storm). They had ice axes and were pretty nonchalant - they weren't bragging, but were quietly assured. (I knew from the Portal web site that no one had summitted from the east during the the prior 2 weeks due to conditions. Our guide had been forced to turn back two weeks before @ the notch due to soft, chest high snow in the gully that completely wiped everyone out after the climb up from Iceberg.)

Anyway, they took off for the TH, and I followed shortly afterward, but peeled off to go fish Flower & Gilbert for a bit. I wasn't that interested in brookies, and since it was beginning to do the afternoon cloud up, I figured I could go run some errands and get prepped for the trip. (I also wanted to check out the Taboose TH - I hadn't been there in years and wanted to check the road conditions.) When I got to the Onion TH, there wasn't a soul around, so they had managed to get down the mountain. I grabbed a coke @ the store in Independence and pulled out to go north, and there they were in front of the courthouse trying to hitch to Bishop. I pulled over and said, ok jump on in.

To make a short story even longer, it was a beautiful afternoon drive up the 395 with even the White mountains still holding a lot of snow. The kid next to me (Legolas) was interested in the Palisades, etc, while all of them were excited to finish their re-supply and hit the trail the next day. I dropped them off @ the hostel and said good-bye. End of story.

Well, since a lot of these kids blog, it turns out Sunshine is a physics student who took the spring semester off, while Legolas is in medical school and was cramming in just the section between Walker & Sonora pass. The reason they were able to do Whitney in tough (trail) conditions is because they have experience hiking, running & climbing in snow:

Dragontail Peak, on a 19 mile mountain run through The Enchantments in Leavenworth, WA.

Man, what a memorable trip! The link to the TR by Legolas reminded me of the guy I had a long conversation with on the summit of Shasta; I noticed he was using a whippet. Due to a warm day and late start, poles were a better tool than my axe on several mashed potato sections; a whippet would have been a nice compromise.
Top

Sunshine (Andew Muhn) - the naked hiker I met @ Kearsage and subsequently gave a ride to Bishop - finished the PCT for 2015: