If you've been searching for the best source of information and stimulating discussion related to Spring/Summer/Fall backpacking, hiking and camping in the Sierra Nevada...look no further!
Post Reply
8 posts • Page 1 of 1

Hello HSTers. During the last bit of August I went trans Sierra from Wolverton to Shepherd Pass, having to scrub a 3 day sojourn in the midst of it to the Kaweah Basin due to a day of rain, and then 2 days of a hacking cough from smoke that made it very difficult for me to get over Colby Pass. All that being said, I did have a great start to the hike in the tablelands, and then my day going up and over Coppermine Pass.

I had used the forums here and Google Earth to see the route from the West side, but there were a lot of differing opinions about the East (Cloud Canyon) side of the pass, so I took a lot of pics of my trip up and over to help out others here. I was able to find and follow use trails for most of the trip up and over.

First off, one traverses East from the Elizabeth Pass trail at around the 11k to 11,200 contour. It is pretty straightforward. When you are below the copper mine West of the peak you bump into the old miner's trail. Here is a pic looking down from the mine to where I picked up the miner's trail. Center frame of the pic is a flatter area with a lot of green. That's where I ran into the trail. 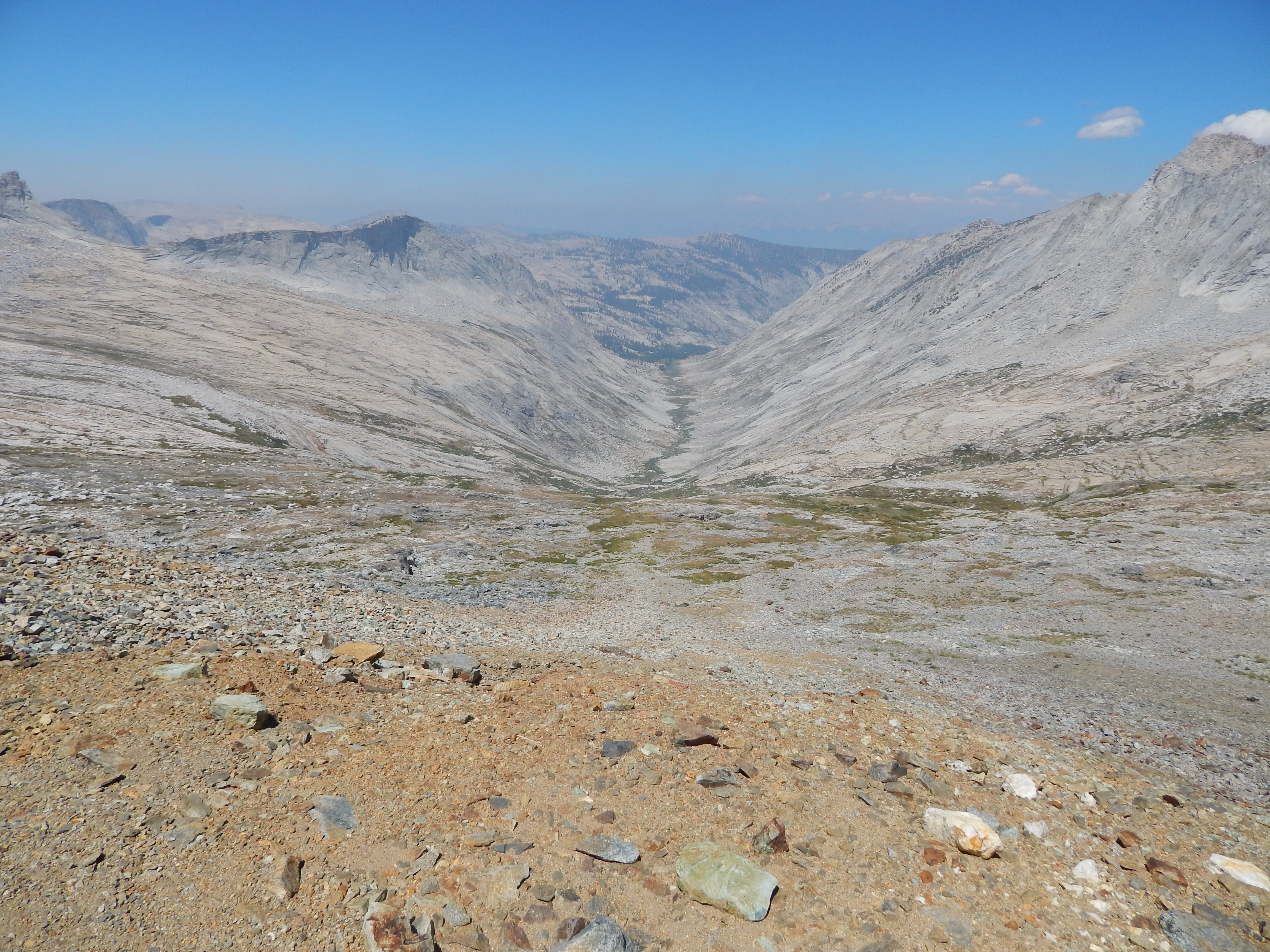 Looking up at the copper mine, the trail looks like this. The copper mine is the small protrusion just below the ridge top center of the pic. 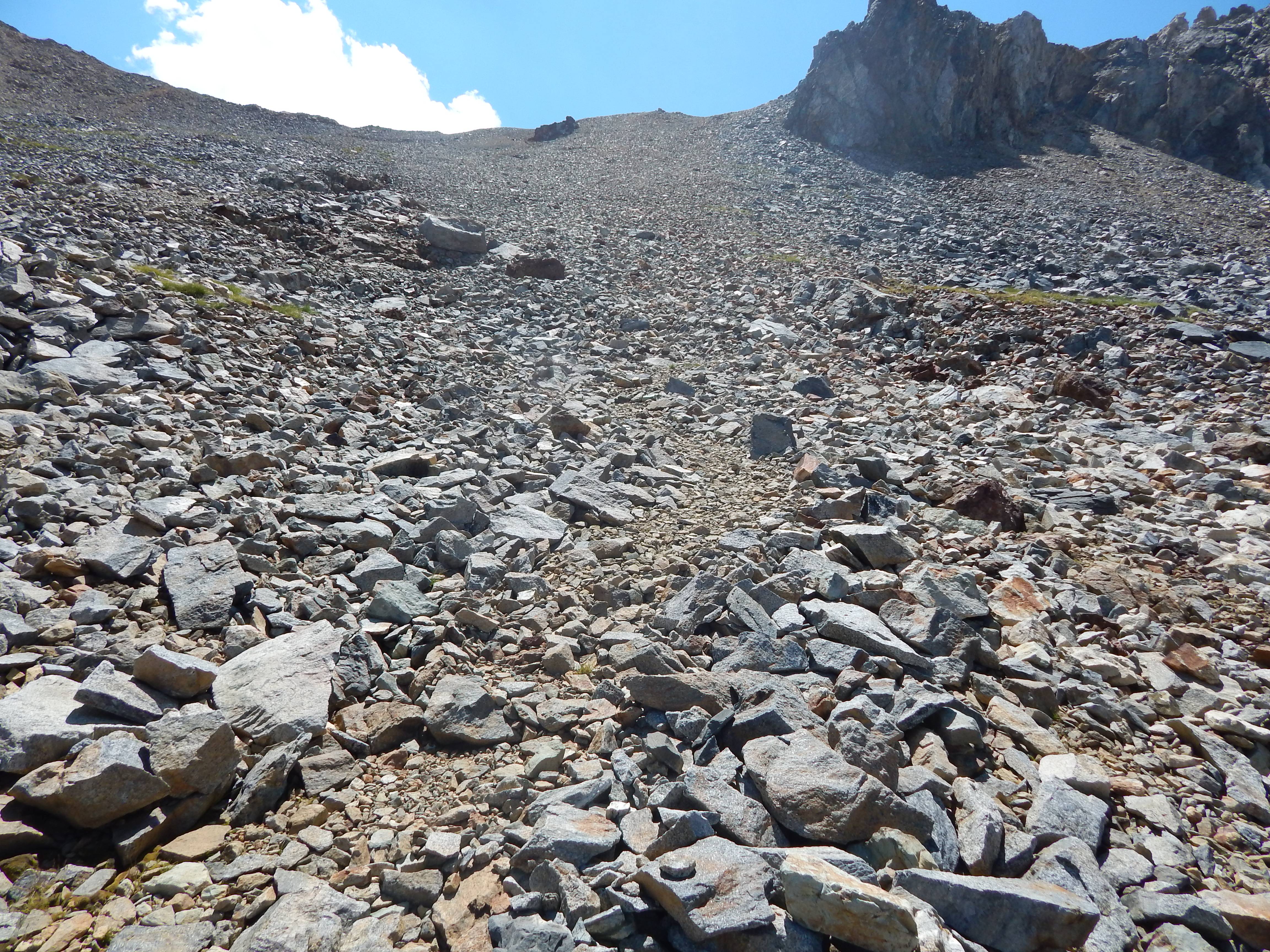 Looking to the East towards the ridge heading north from Coppermine Peak I did not discern an easy way down from what I have read here is an alternate way over the pass. I read people got cliffed out and for the most part that is what I saw. Here is a view of that part of the ridge. 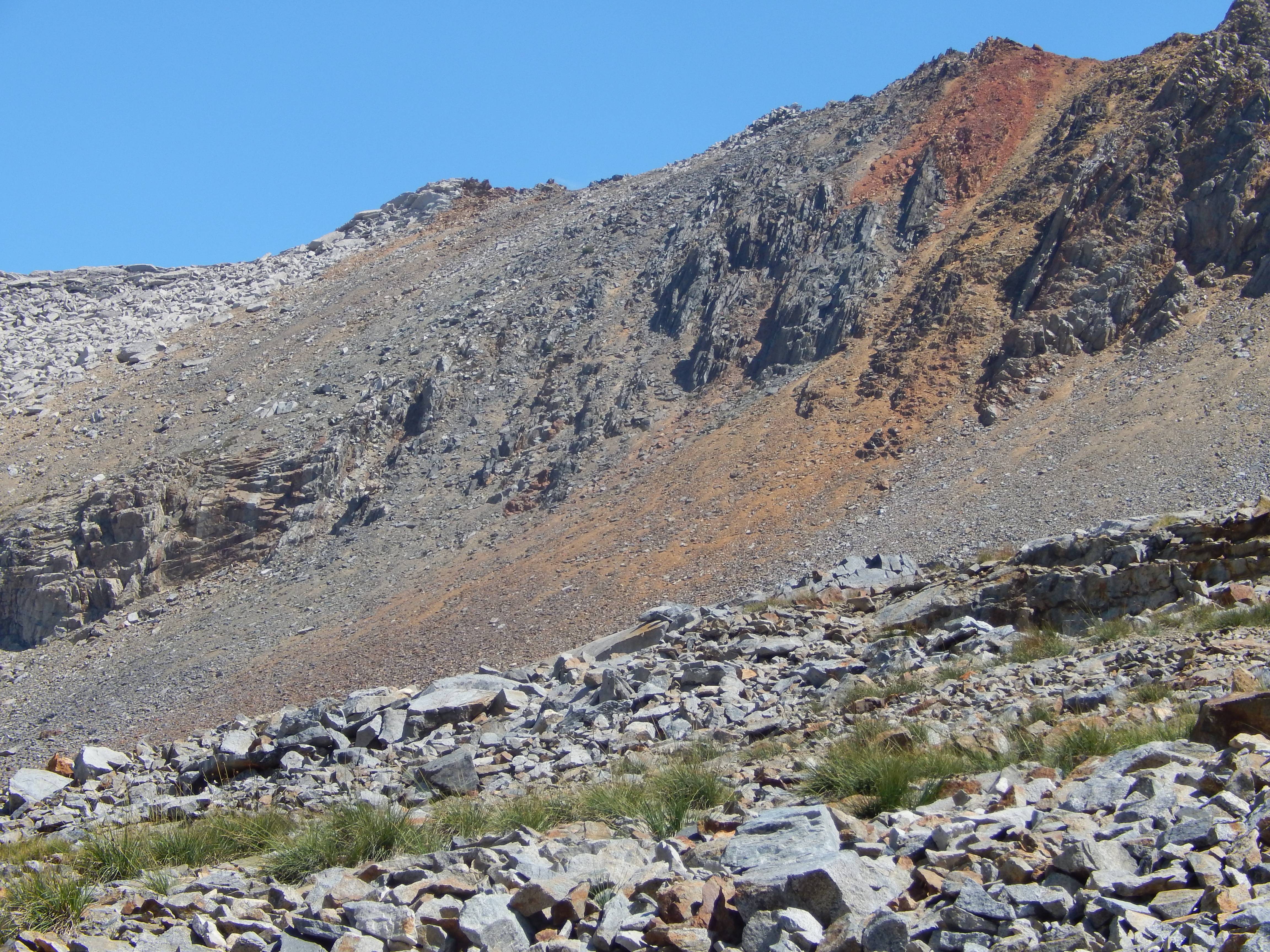 Once you gain the ridge above the copper mine, there is a good use trail just on the Sequoia side of the divide that takes you up to just behind Coppermine Peak. This pic doesn't show the trail that well, but it has been used enough that it shows up easily on google earth pics. This is the view from near the peak looking West down the ridge towards where you come up from the copper mine itself. 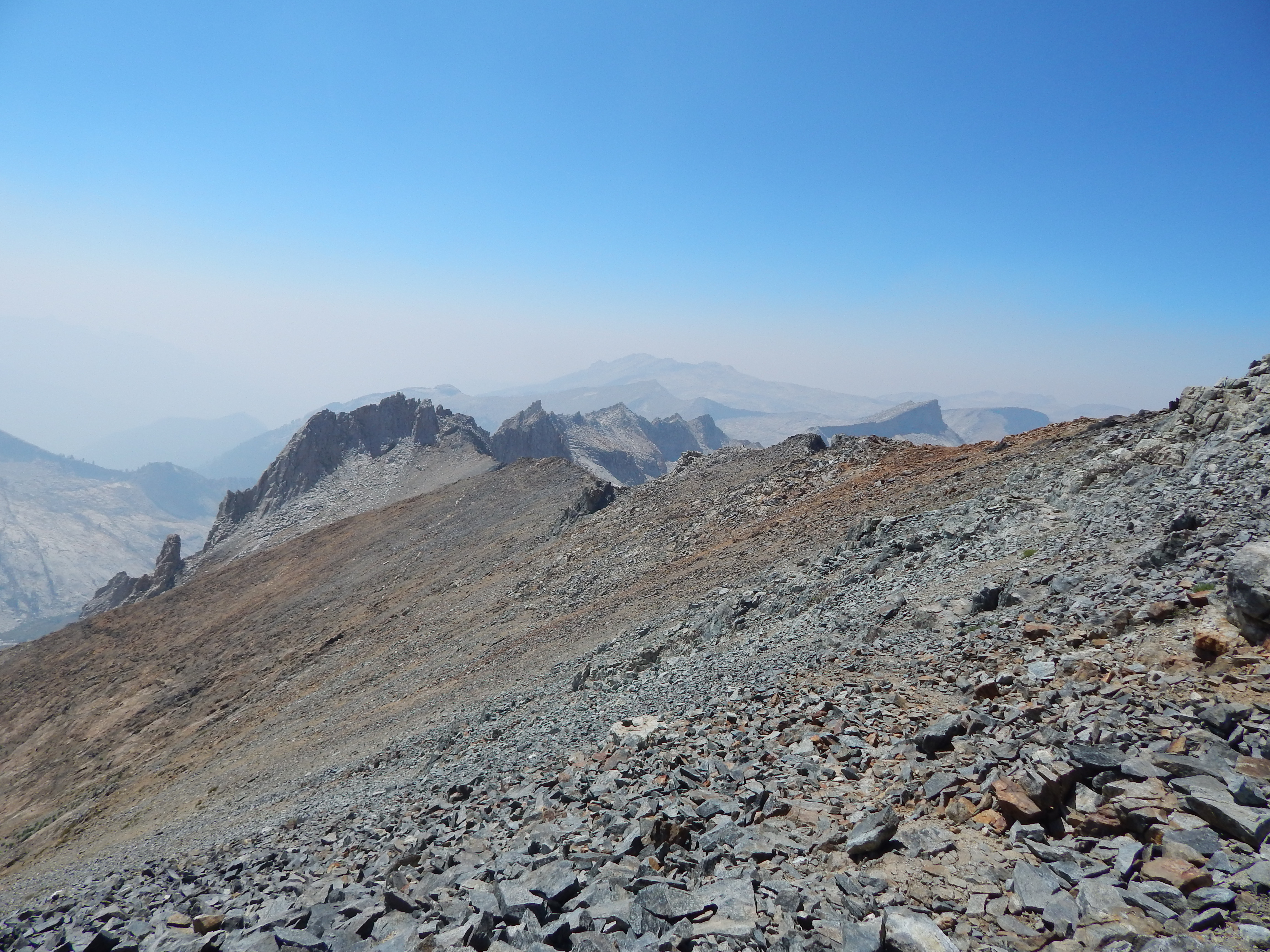 The Cloud Canyon side is not nearly so distinct, but there is a use trail that takes you down through the talus. From reading the forums I think most people who have trouble finding it are too far to the West, that is too close to the ridge that that goes North from the peak itself. The use trail goes through a very small notch just East of the peak, (maybe 100 to 200 feet East at most) and then the first chance it gets it switchbacks off to the East and works through the talus field to the East of where it entered the slope. Here is a pic of the notch (sort of) and the view into Cloud Canyon. Here is a pic maybe 20 or 30 feet down in elevation from the notch. You can see the use trail cuts over to the East first chance it gets. I missed that cut initially and proceeded to have to scramble up loose sliding talus that was on top of other loose sliding talus to regain the trail. 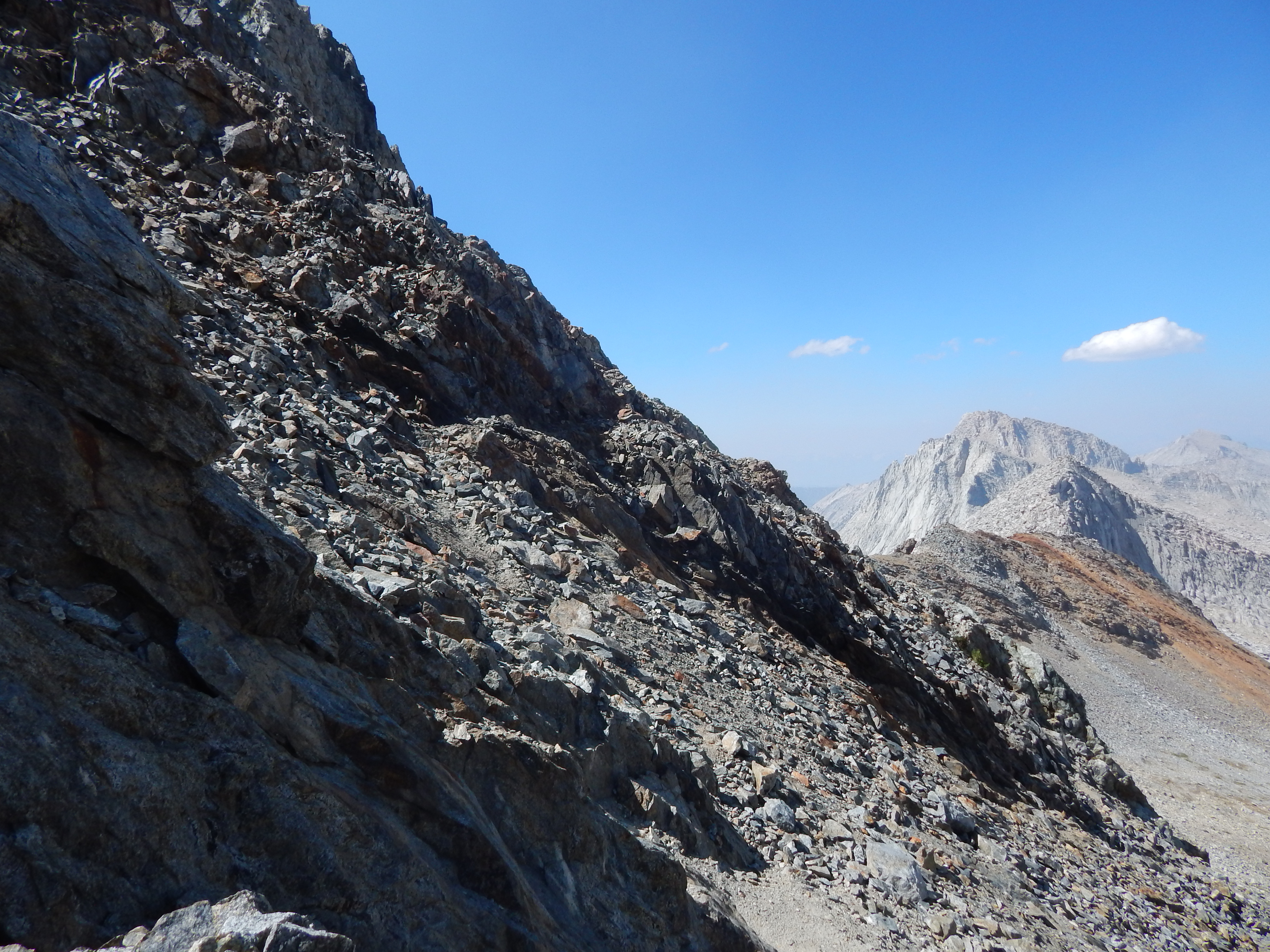 Here are two views looking up at the notch that the use trail uses to gain the ridge. As noted, the use trail will be left of this notch as it switchbacks up. 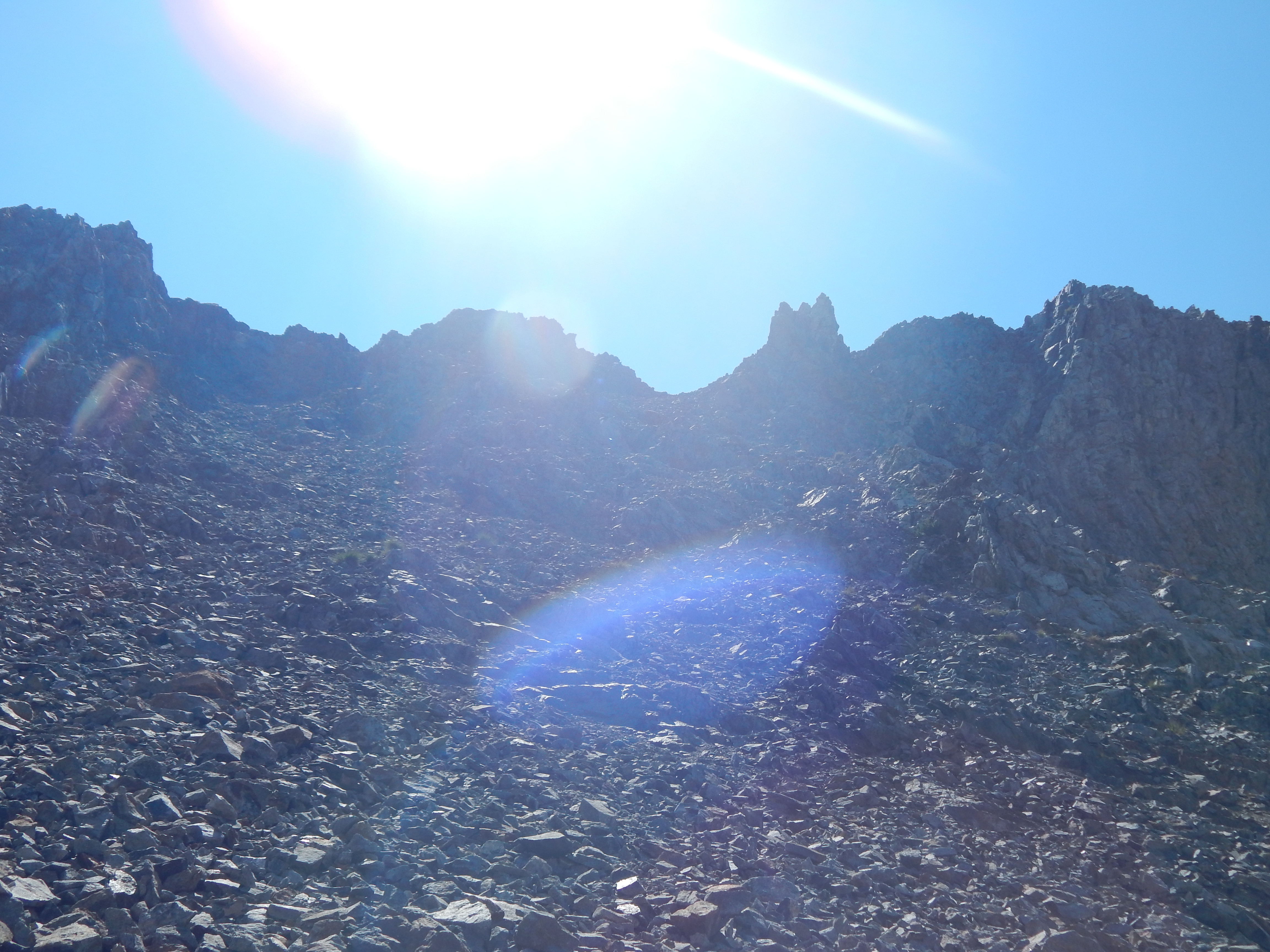 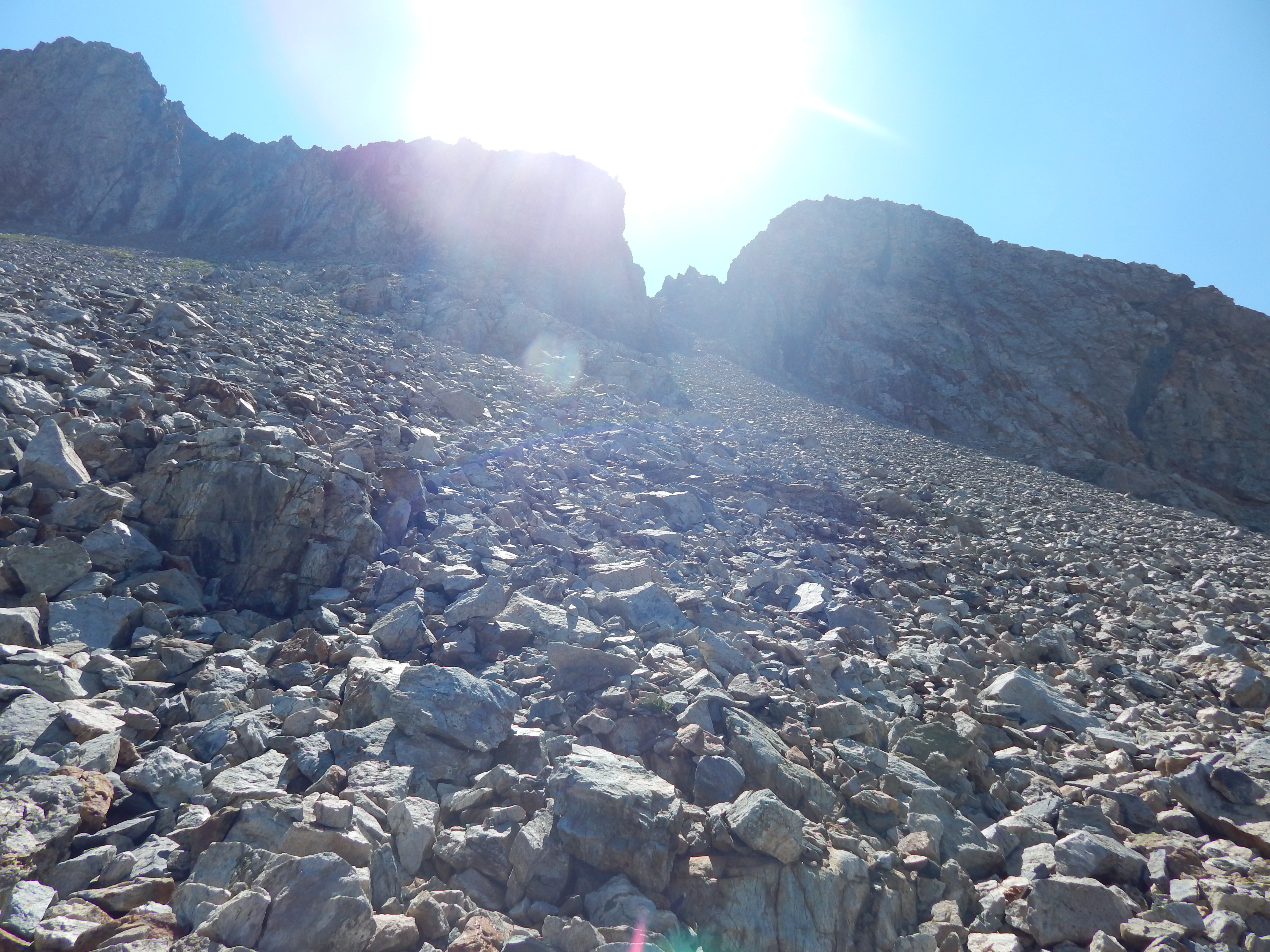 The use trail itself is very faint. Basically if it looks like it could be a trail, you are on it. It is loose on top, but firm underneath, and there are small ducks usually at each switchback. 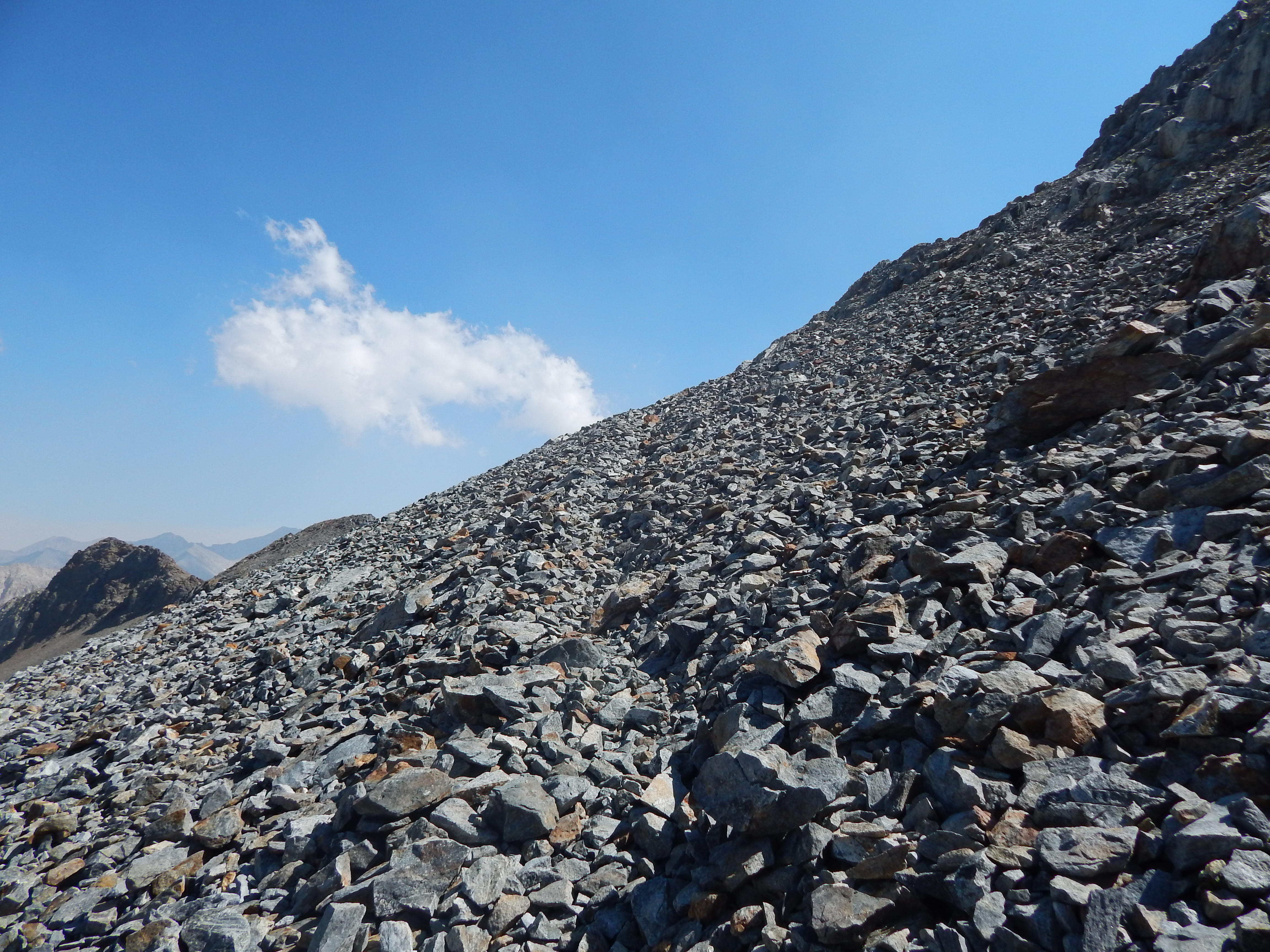 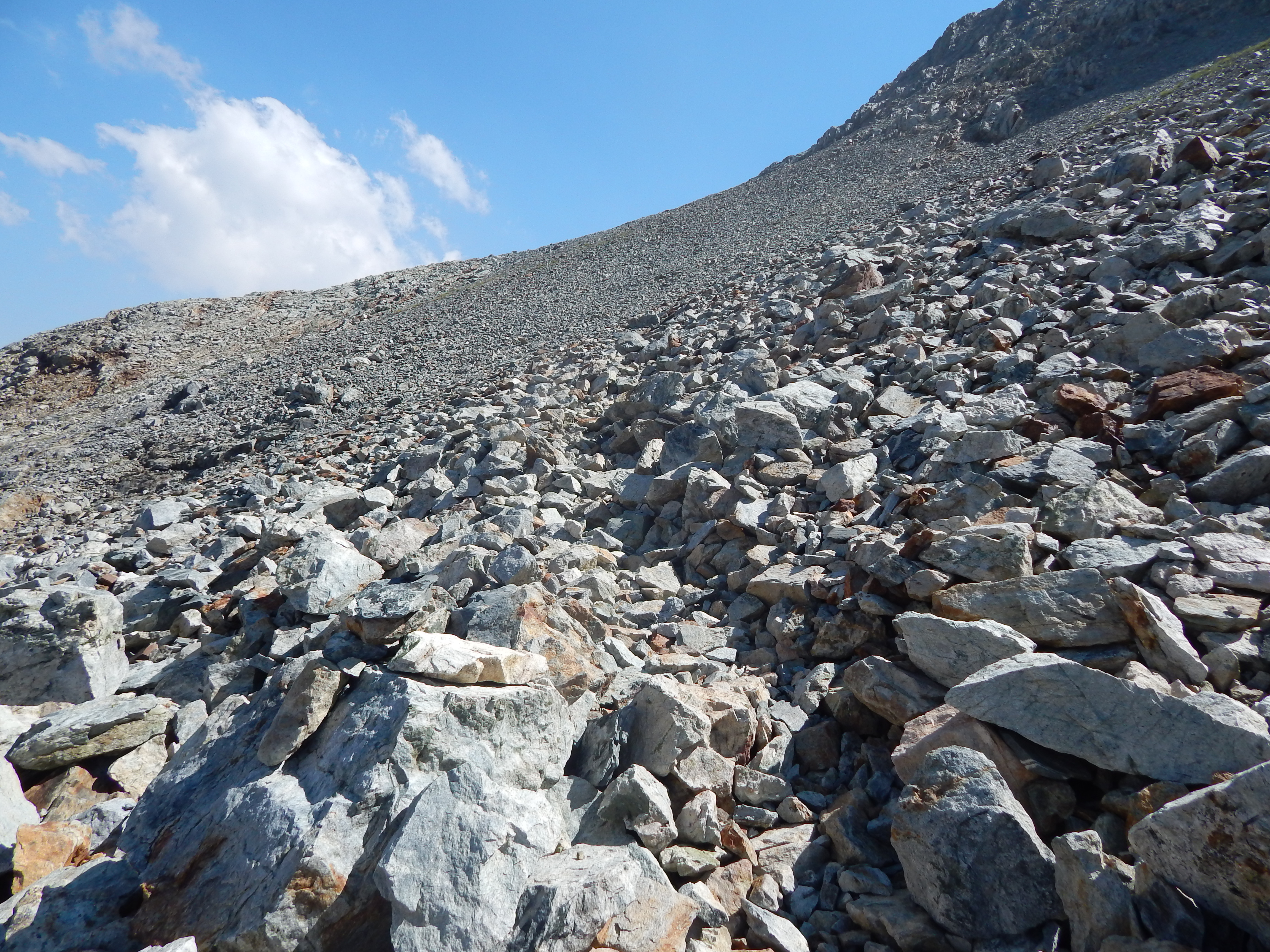 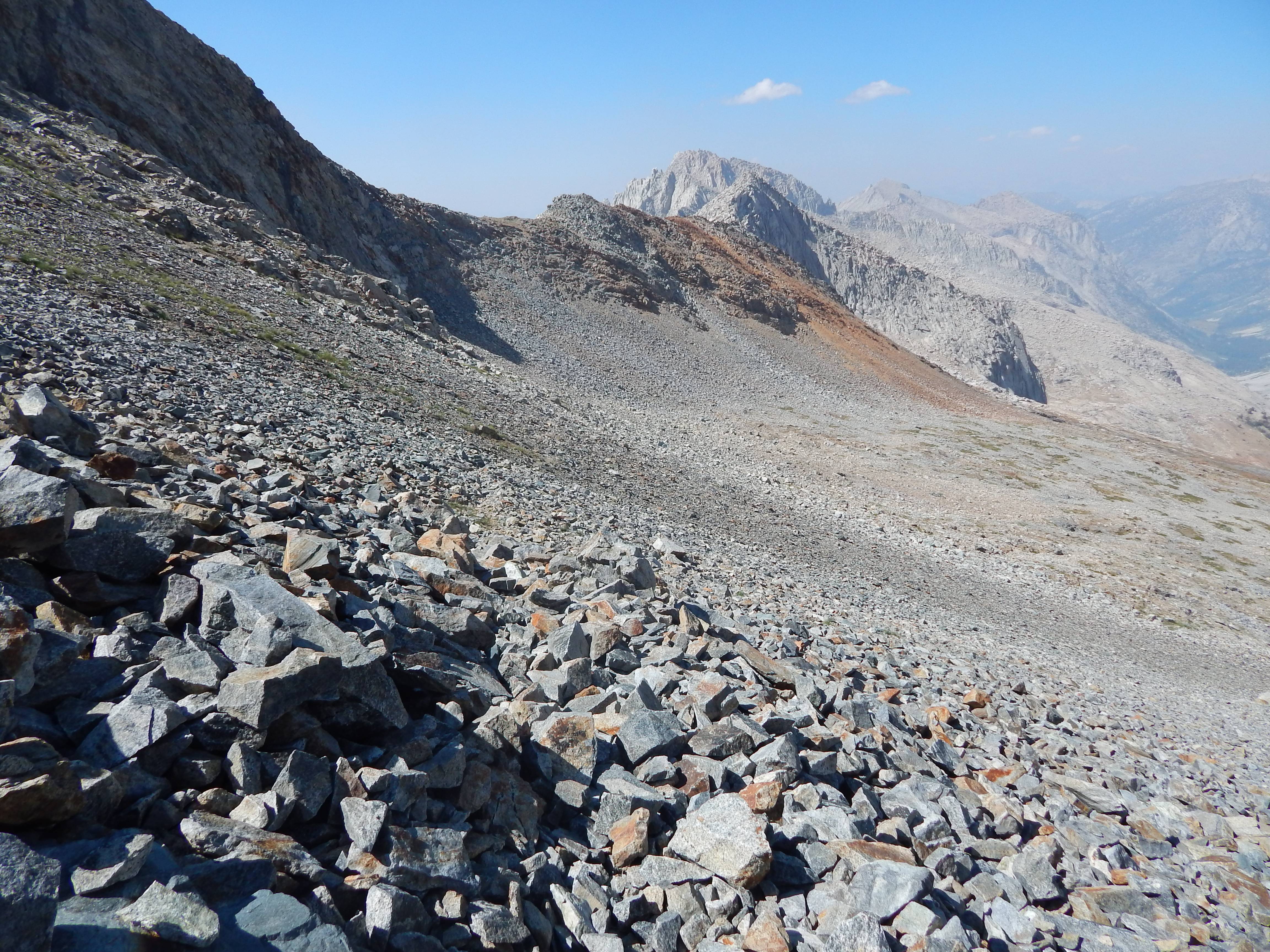 Towards the bottom of the talus there is a large old bucket that is right on the trail as well, that is pretty visible from all over. 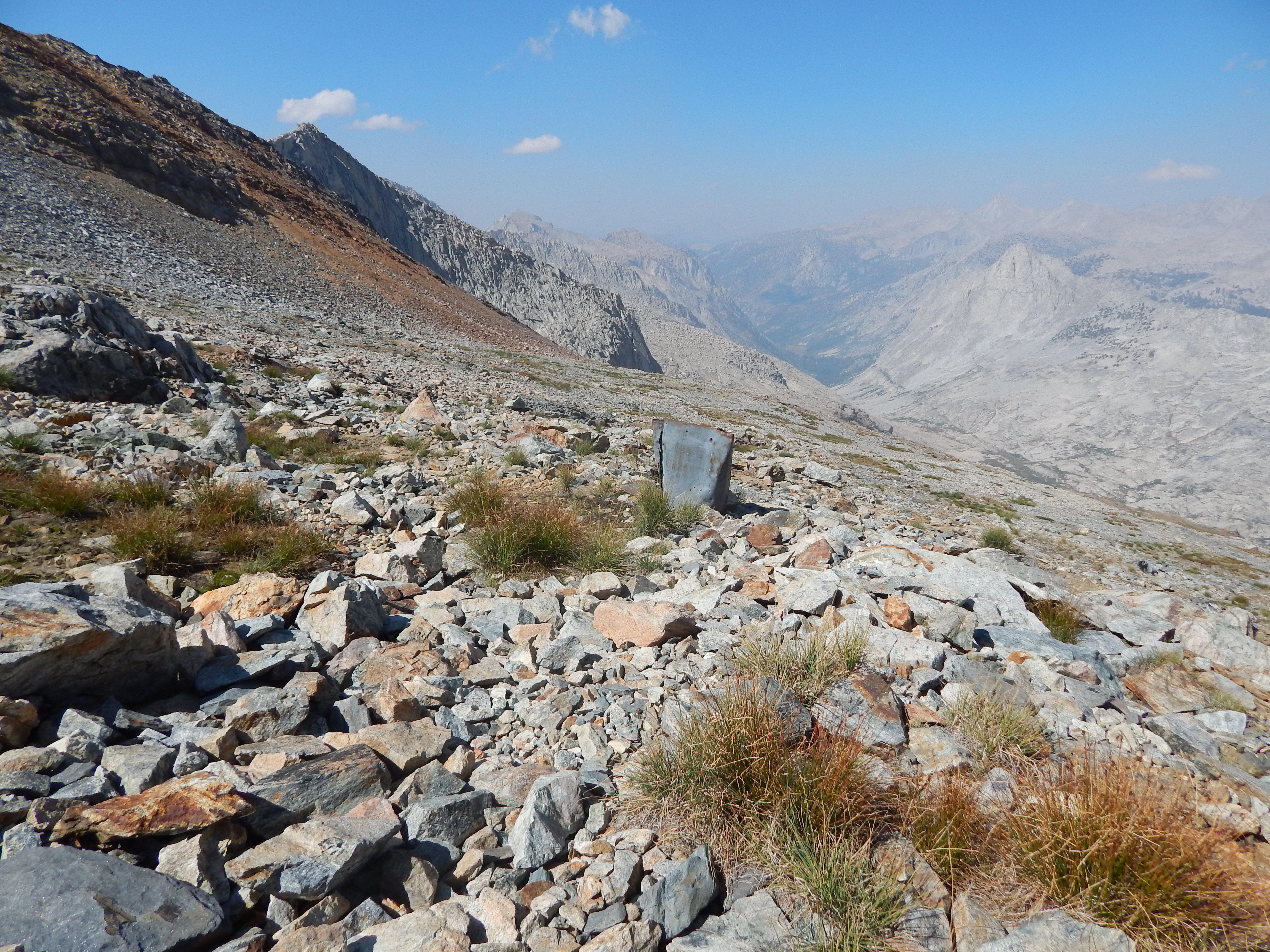 Here is a view from about where I lost the use trail on the way down. It never does angle over to the West. You can see the notch next to the peak, and you just need to be biased left of the notch if you are climbing from the Could Canyon side to run into the use trail. 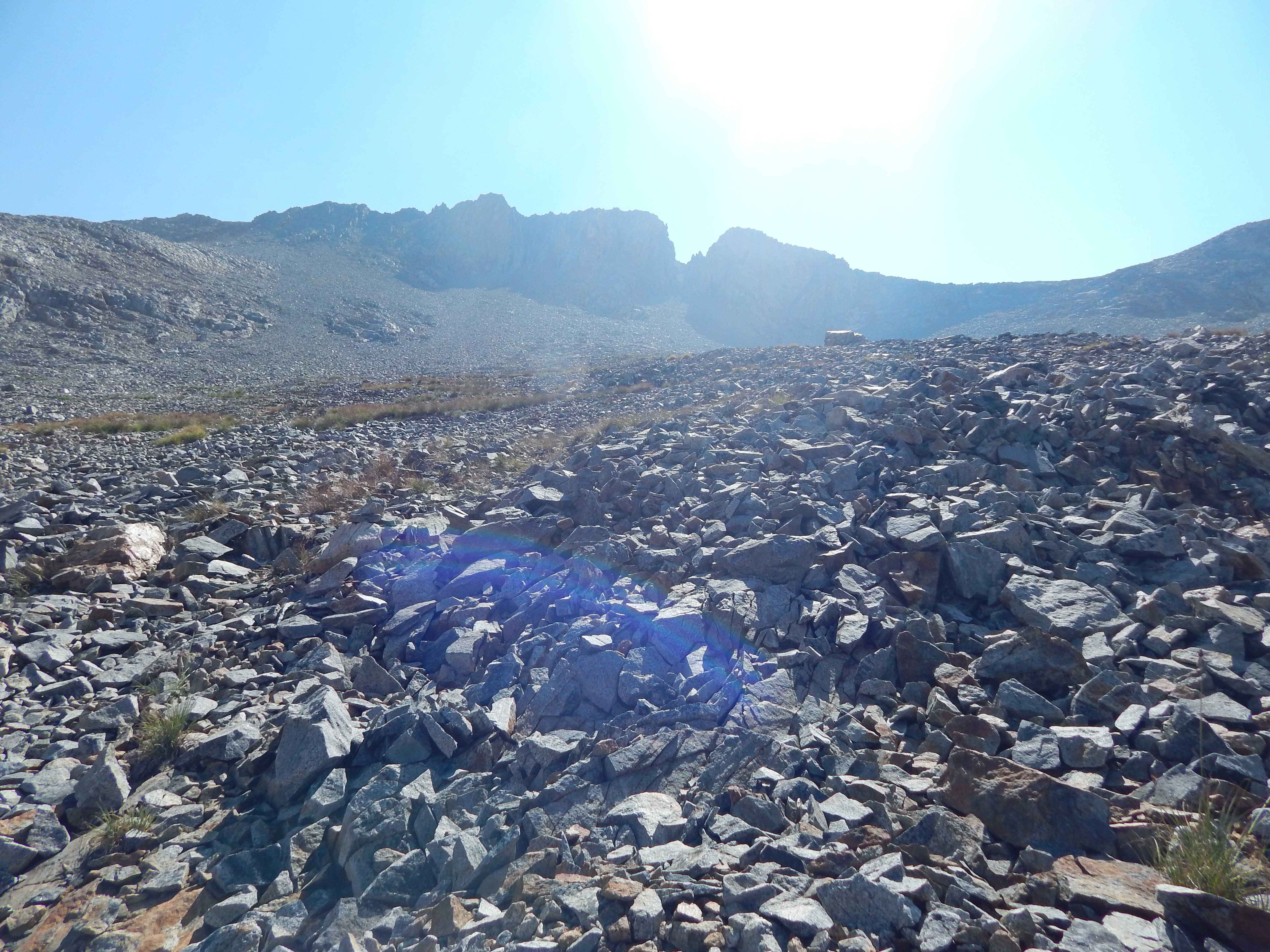 When the use trail ran out for me, I angled to the left towards the top of the stand of Foxtail Pines. Unfortunately I should have cut harder left to avoid having to slide down the loose red stuff in the middle of this pic. I would have been better off staying higher and following the slabs around to the right to the top of the Foxtail Pines, instead of sliding into them about 3/4 of the way down. 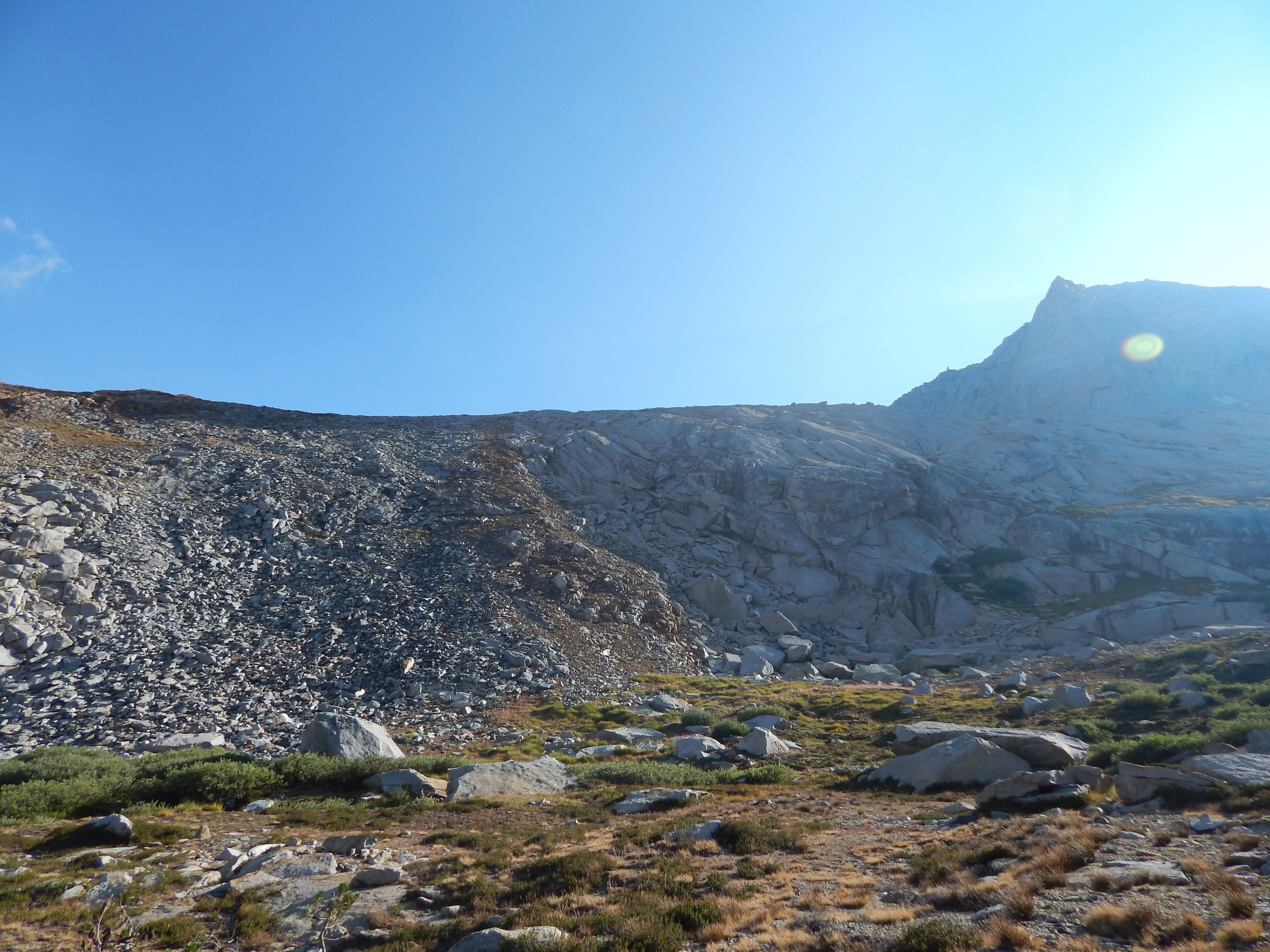 Once in the Foxtail Pines, there is an old trail that will switchback you up and down through the pines. It is in pretty good shape, but there are a bunch of places where small trees have decided to grow right in the middle of the trail. So if you run into a tree and the trail disappears, it is probably on the other side of the small tree. Once you learn that, it is easy to follow, as it is etched into the hill pretty good. There is one section where 2 downed tree trunks have completely covered the trail for 40 feet or so as well. I lost the trail right near the bottom, but as soon as I popped out of the trees, there was a major cairn right there. It is below the Southernish edge of the pines.

So I hope this will help others on the Cloud Canyon side. Just knowing there is a use trail makes it easier to find I think. Coppermine Pass has maybe the most incredible views in all directions of any place I have been in the Sierra. Cloud Canyon, Deadman Canyon, Lion Rock and Lake, Valhalla, West towards Horn Col, it is just stunning and then more stunning each way you turn. I'll have more pics when I get around to writing up the hike properly.

Here's a photo of the inside of the Coppermine.

Fascinating. I assume that they tried to mine copper ore out of that mine.
Top

Hi Rainman,
Thanks you! This description & pictures is really helpful. We were looking for Coppermine Pass many years ago, in a hail storm, but weren't confident. So our group went down Elizabeth Pass to Tamarack instead. Next time I'll know the way.
Thanks!
-mort
Top

I get the feeling from the little research I've done that it was more of an excuse to get out of the valley heat.
www.sierrahiker.com
Top

Coppermine Pass has maybe the most incredible views in all directions of any place I have been in the Sierra. Cloud Canyon, Deadman Canyon, Lion Rock and Lake, Valhalla, West towards Horn Col, it is just stunning and then more stunning each way you turn. I'll have more pics when I get around to writing up the hike properly.

Thanks for this post Rainman. Coppermine is a confusing pass, but like you say, it is also a place of stunning views! It's always nice to travel along a high ridge like that. I happened to be up there after a brief snowfall in October, and this made it easier for me to locate the faint trails, which you've done such a fine job of describing.


100_0550.jpg
This is looking southwest from near the summit of Coppermine Peak, with the trail west etched in snow. This is the same area seen in your 4th photo. As you can see, the snow made it too easy!


100_0545.jpg
At the bottom center you can see one switchback on the trail leading up to the crest of Coppermine ridge from the east.


Here are some of those fine views off that ridge:


100_0459.jpg
Looking down Cloud Canyon with the long shadowy ridge of The Whaleback.


Thanks again for the post on this tricky area, which some of us also need to figure out in winter.
You must be registered and logged in to view the files/photos attached to this post.
Top

Thank you very much for this detailed info! I have also heard conflicting things on the feelings of exposure on that E side of the pass. What's it like?
Top

notis wrote: ↑
Thu Sep 10, 2020 10:17 pm
Thank you very much for this detailed info! I have also heard conflicting things on the feelings of exposure on that E side of the pass. What's it like?

I never felt exposed on the East side at all. I am glad that faint use trail is there though, as the talus off of the use trail really is loose.

On the ridge from the peak to the miners trail it is pretty steep to the Sequoia side, but never felt terribly exposed to me.
Top
Post Reply
8 posts • Page 1 of 1