If you've been searching for the best source of information and stimulating discussion related to Spring/Summer/Fall backpacking, hiking and camping in the Sierra Nevada...look no further!
Post Reply
14 posts

I tried to plan shorter miles for the days we go over the big passes.

I'm mostly concerned about finding enough sites for 4-5 tents at Hamilton, but is there any other stops I should be concerned about? We don't all have to be right next to each other, but close would be nice. Any suggestions for alternate stops?

I have not done your loop, but am familiar with parts of it. I walked through Bearpaw Meadows and was glad I did not have to stop there. It struck me as a crowded, dirty place with piped water and precious little privacy. However, many others on this site will have advice about camping around there.

I also walked through Redwood Meadows. It was much less crowded and cleaner, but I did not find it particularly attractive either. The trees were impressive but that was all that this camp area had going for it. The water from the pipe behind the ranger cabins was discolored with rust and I felt the need to filter it twice. I moved on and camped at the Cliff Creek crossing, which had fewer campsites but was far nicer than Redwood Meadows. If camping at Redwood Meadows there was a lot of flat ground around the two ranger cabins.

At Hamilton Lake most people cram in to the relatively few sites on the W shore of the lake. You can count on being shoulder to shoulder there. I camped NW of the outlet. I did not have a view of the lake, but I did have a view of Valhalla, which is impressive, and it was a short walk uphill to the shores of the lake. And since all the people were on the other side of the outlet I had much more solitude. There was even a bear box in my camp, seldom used.

When you say "Little Five Lakes" be aware that there are two groups of the "LIttle Five Lakes." The most commonly visited lakes include lake 10476, which seems to always have people at it, and which is at an important intersection of trails. I camped north at lake 10410 which involves a little cross country and which has relatively few campsites, but which is spectacular. For multiple tent sites your best bet would be to stop just short of the lake. There are only about two tent sites on the accessible shore of the lake that I found. Or you could go on to the more easily accessed southerly Little Five Lakes and camp in numerous spots.
You must be registered and logged in to view the files/photos attached to this post.
Top

In 2018, I did a 4 night trip from Wolverton trailhead, over Panther Gap, down to the HST, up to Tamarack Lake, then down to Hamilton Lake, dayhiked up to Kaweah Gap, then back on the HST to Crescent Meadow and caught the free shuttles (took 2 transfers) back to Wolverton. Shuttles are probably not running this year due to COVID-19.

I made it in one day from Wolverton past Mehrten Creek all the way to Buck Creek to camp. But I saw only a couple of small sites at Buck Creek. On a previous trip to Alta Meadows and the Tablelands, I passed by Mehrten Meadow and was not impressed - seemed like a dark area in the forest. But I did not check carefully for campsites. On my 2018 trip, I noticed a nice campsite on the cutoff trail from Mehrten Meadow area down to the HST. It was in a flattish open forest area just a couple hundred yards before the trail crosses the main Mehrten Creek, about 1/2 way down. But it was occupied by the large tents of a trail crew. About a mile west of Buck Creek, I also noticed an open area with some granite slabs with views just downslope from the trail that could accomodate a large group on the broad ridge between a western tributary of Buck Creek commonly called Nine Mile Creek and Buck Creek proper. You would have to carry water 200 or so yards from Nine Mile Creek. Nine Mile Creek itself had some poor sloping campsites in the dark forest with a bear box.

On my way back, I intended to camp at Buck Creek again for my last night but was just too tired and too late in the day when I rolled into Bearpaw Meadow coming from Hamilton Lake (after my dayhike up to Kaweah Gap and hiking through tremendous thunderstorms causing instant waterfalls on the granite slopes to the south). So I reluctantly camped at Bearpaw Meadow. In my 50 years of High Sierra backpacking, Bearpaw Meadow is absolutely the worst campsite I have experienced! It is a dreary, dark, dirty, dense fir forest with no views at all and many, many people.

I spent one night at Hamilton Lake. There were lots of campsites close together, mostly taken already when I arrived at 2 pm, along the south side of the outlet creek and by the lake shore at the outlet. I climbed up the slope a bit above the NW shore (south of the outlet creek) to get some privacy, but only could find a very small site (which then flooded due to poor drainage during the terrific thunderstorm later that afternoon!). But the view of the giant cirque and the Valhalla cliffs was magnificent.

By contrast, at Tamarack Lake, several miles to the north of Hamilton Lake, I apparently had the lake to myself the previous night. I recall lots of flat areas to camp along the western shore in open forest and nice views of the cirque. There was also a large flat camping area in the flattish small valley along the Tamarack Lake trail just east of where it takes off from the Elizabeth Pass trail. Personally, if I were your group, I would camp here rather than at Bearpaw Meadow when coming from Redwood Meadow. Take the HST and the trail up Lone Pine Creek in one direction, and the High trail in the other getting to here and back from Bearpaw Meadow.

Thank you kpeter for the great info and pictures. I will definitely look for your ledge camp NW of Hamilton outlet... that's my kind of spot! I was also eyeballing Lake 10410 as I think I read about it somewhere else, and your site there looks like a good one, especially in this low snow year. I appreciate all the other info as well!
Top

CapnPaul -
A friend and I did this same loop in 2017 (except started and ended at Crescent Meadow). It is a fantastic loop !

Regarding Kpeter’s input on camping at Redwood Meadows; I generally agree. In 2017 we were lucky enough to find a very nice spot near (but not too near) a very handsome and enormous Sequoia. We found a spigot nearby with good water, AFTER trying to filter from a nearby stream. The stream water had an unappetizing golden-brown color (and a bitter taste) even AFTER filtering, due to tannins and other stuff dissolved into it from flowing over the nearby Sequoia roots and fallen bark. But you shouldn’t count on finding the same “good” spigot we did (or at least maybe not find it in working order).

Your itinerary in general seems to rush through the good stuff and linger through the mundane. Maybe plan to camp in Nine Lake Basin after crossing Kaweah Gap; shortening this day’s hike will allow more time to enjoy Precipice Lake. Then camp at Little Five Lakes the next night. If you stretch the “Black Rock Pass” day a bit to camp at Cliff Creek crossing (rather than Pinto Lake), you could then reach Tamarack Lake ... per Wildhiker’s suggestion ... pretty easily in two days ... more like 1.5 days if you go Cliff Creek to Bearpaw in a day, then just another 4 miles to Tamarack the next day. This would allow you half a day to enjoy this very attractive place. Adding Tamarack Lake AND breaking up the Hamilton to LFL segment into 2 days would change your trip into 9 days; if you’re strictly limited to 8 days, you could just pick one of these two suggestions. 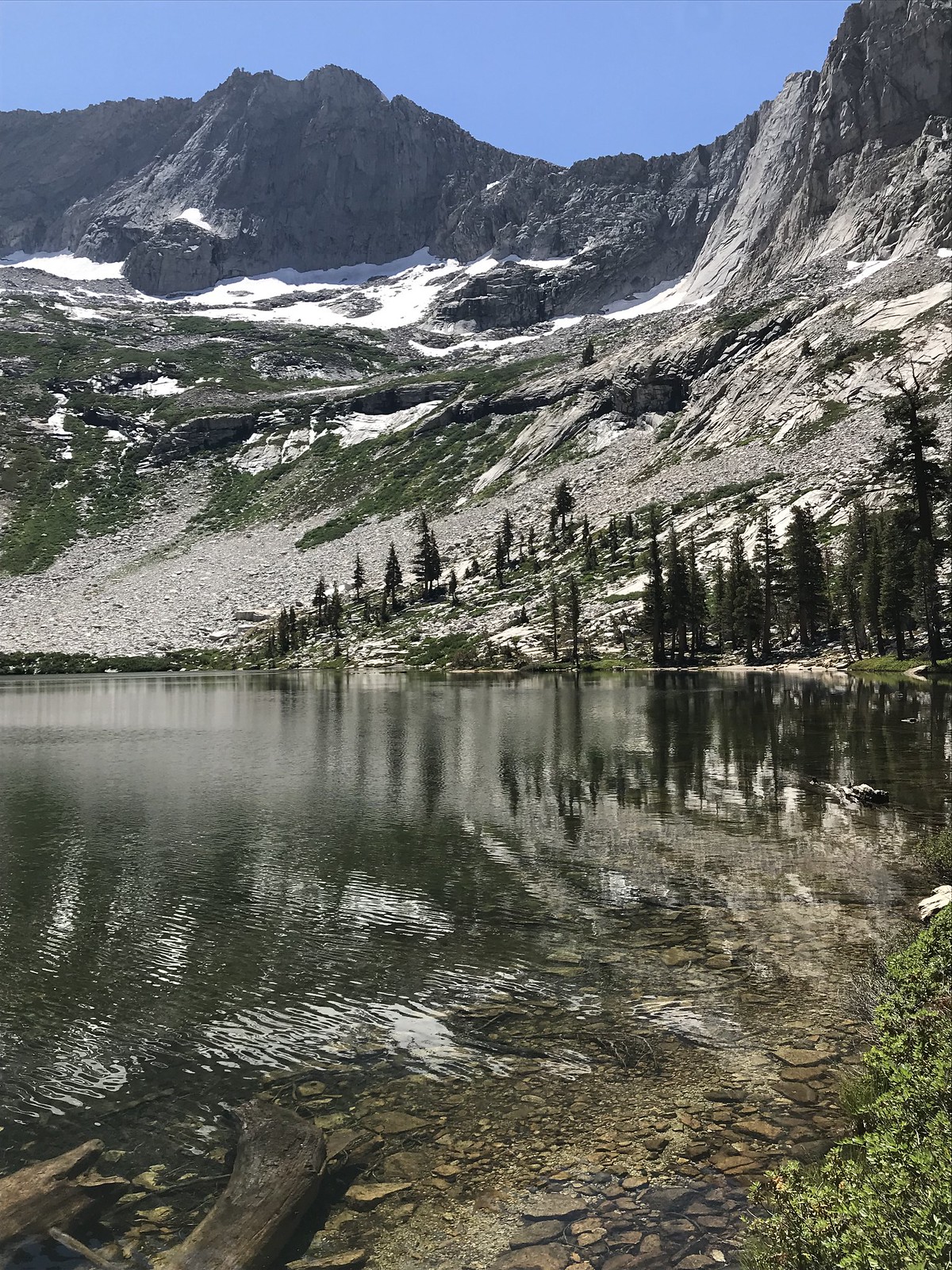 Thanks for your advice Grampy.

What about this itinerary?

Care to share your thoughts? Are my mileage ambitions realistic?
I checked out Tamarack Lk and it looks amazing, but so does Big Five Lakes and it's more along our route... Most likely I will save Tamarack for another trip, maybe include Tablelands in that one.
Top

CapnPaul -
Just to clarify, do you have a permit for Alta Trail, or do you have a High Sierra Trail permit, and you’re just starting from Wolverton for convenience ? With an “Alta permit”, I think that, to be “legal”, you need to spend your 1st night on the Alta Trail (Mehrten Meadow or wherever) rather than pushing on to the HST. Anyone else care to correct me on this ?

Otherwise, it looks like a do-able itinerary. Other than elevation gain (and lots of it, going from Hamilton over K. Gap), most of the trail is well-maintained and easy walking. Once over Black Rock Pass, though, you will hit a few miles of trail (before reaching Pinto Lake) that pass periodically through talus. When we did this in 2017, some stretches also were a bit overgrown with grass and small brush. Easy to push through, but we found trekking poles to be useful in pushing vegetation aside in front of our feet, to avoid rolling an ankle (or stubbing a toe) on otherwise unseen stones (some quite large) that can roll onto the trail tread. No big deal, but can impede your pace a bit on what is otherwise a fast downhill cruise.
Top

Thanks for the input. Yeah, I know it's a big downhill after BR Pass but that can get rough on the knees so I'm allowing for a little caution in the form of stopping short of Cliff Ck Xing if need be. We will all be using poles. I never hiked with poles up until 2 years ago, but i'm sure a believer now. Being a low snow year, it should make things easier.

I have an Alta permit, and I will definitely check on the first night's camping requirements. Thanks for the heads up on that.
Top

grampy wrote: ↑
Sun Jun 21, 2020 3:23 pm
CapnPaul -
With an “Alta permit”, I think that, to be “legal”, you need to spend your 1st night on the Alta Trail (Mehrten Meadow or wherever) rather than pushing on to the HST. Anyone else care to correct me on this ?

I have an Alta permit and I just had my permit phone call today. When the ranger asked me where I was staying the first night, I replied Nine Mile or Buck Creek and I got no push back.
Top

Nice! Thanks for the info. Druid, have you done that first section before in a day?
Top
Post Reply
14 posts