If you've been searching for the best source of information and stimulating discussion related to Spring/Summer/Fall backpacking, hiking and camping in the Sierra Nevada...look no further!
Post Reply
27 posts

Wandering Daisy wrote: ↑
Wed Apr 17, 2019 1:06 pm
Fishmonger- What are the dates/year of those photos? As you can see on the photos the rock is darker. It actually melts off pretty quickly due the dark rock. I think by mid-August this year you should be fine. I just looked at the NWS long-term forecasts and they are predicting a warmer than normal conditions for June-July and August.

The rock is dark where it gets sketchy, but it is a north exposure and the sun angle is shallow. There's reason why there is a glacier on that side of the ridge. Photos were taken over various years. The most snow in these shots is June 30, 2016, a low snow year, but early. August is usually no big deal even with a lot of snow, but in July I would expect a segment of the upper switchback traverse that goes from from the east end straight across to to Koip Peak Pass to cross at least one good snow section, one that is very steep and could cause concern if the snow is still present. I think we had some significant snow there in early July 2014, also not a big snow year. In July 2017, we avoided this route and hiked over a completely snow covered Donohue Pass. I think mid July should be safe, earlier, I'd really want to check with rangers or bring crampons.

the second snow field ahead here on August 10 last summer (low snow year) is barely below the traverse to the pass. In heavier snow years, that segment can be the crux of the whole route. Also note the sun angle barely touches the ridge. This is about 9am in August. Moments before I was still hiking in total shade. 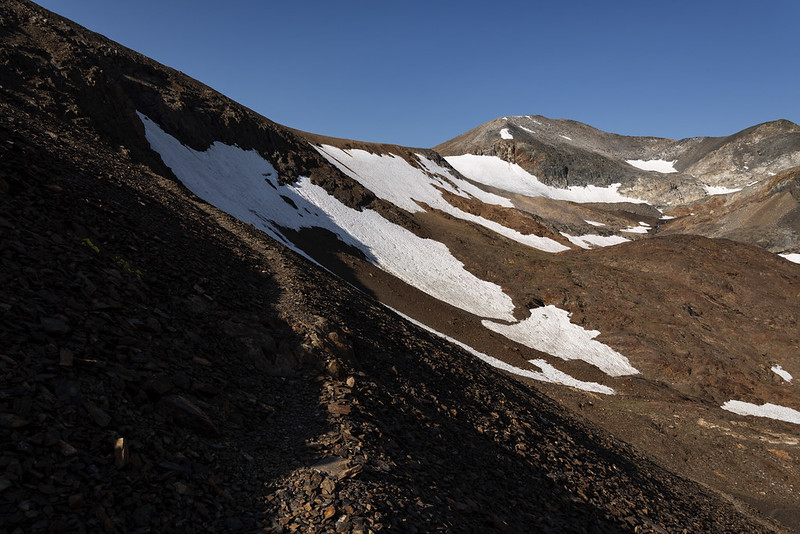 Switchback heading up to the pass

I would say if you see any snow on the part with the 20 switchbacks that leads up there you will have to deal with one stretch that will be rather sketchy when you get to the top of that second snow field. I would think that an early deviation from the trail where there is less snow, heading up to the top of the ridge, may be the best solution. I've gone through the snow field one year, but it was already hiked in, so the only steps that were somewhat precarious was on the part where you have to climb over a small rock spur that interrupts the straight smooth trail leading up to the pass, right on top of that snow field.

This year, I would expect no snow later in July, but late June or early July may be more problematic. I've been up there in 30% snow years in June and there was no snow on any part of the trail, but I think we are more at 140% this year, right?
My stuff on Flickr
Top

So then, you think an August 17th start will be OK?
Just an old musician who loves the Mountains.
Top

You should be fine any time in August. Even if there's still some snow, you won't the first to cross it. I expect the big melt to be mostly done by late July. The even bigger snow pack of the 2016/17 winter didn't last that long either.
My stuff on Flickr
Top

thanks
Just an old musician who loves the Mountains.
Top

Re: Modified JMT suggestions (Canceled due to illness)

Well, unfortunately I have to cancel my plans for the JMT this year. I had been experiencing quite a bit of weight loss over the last several months that I had attributed to getting some dental implants to anchor my lower denture. Come to find out I have retroperitoneal fibrosis (a chronic condition that causes a mass to form around your abdominal aorta and spread to constrict your ureters). It is not life-threatening but if left untreated will eventually result in Kidney failure. So obviously I'm getting it treated. Treatment is a renal stent to allow my left kidney to empty and massive doses of an immunosuppressive drug to shrink the mass.


So between the 30 lb. weight loss (with a lot of loss of muscle mass) the stent, the high chance of infection, and the fatigue (thankfully the only side-effect I have). I've decided that the trip of a lifetime will have to wait. I was totally bummed by this but have faith that I will once again be in good enough health to do it. I just have to concentrate on getting healthy and strong for now.
Just an old musician who loves the Mountains.
Top

Re: Modified JMT suggestions (Canceled due to illness)

So sorry to hear of your health problems, just as the summer was starting! Get well. The mountains will still be there.
Top
Post Reply
27 posts

Users browsing this forum: No registered users and 7 guests