What is/are the most aesthetically pleasing prominent peaks, that stands above the rest, to you, and something that continues to impress you no matter how many times you have seen it or something you would like to re-visit again? Maybe Aperture Peak, The Whaleback, Tehipite Dome, Valhalla, Seven Gables Peak, Mt. Ritter/Banner, one of the Minarets, Sawtooth Ridge, Devil's Crag?

Let me be a little more specific, places you cannot see from your car window.

So I Guess Ritter/Banner, The Minarets, and Sawtooth ridge, And all the peaks visible from 395, Tioga Pass Road, Kaiser Pass, Mineral King, and from the valley, etc. don't count? You've cut out a bunch!

For me it is Sawtooth Ridge as I drive south on 395. That means I am close to heaven as I return to the Sierra from Oregon. There is also something special about Conness, and the little ridge that divides the upper reaches of the West Fork of Ferguson Creek from the upper reaches of Box Canyon. One of these days I need to transfer my old slides to digital to share a pic of that ridge.

I like Mt Dana for the views. Technically visible from Tioga rd I suppose, but it's not one of those you appreciate in the same manner until you are on top of it.

Moraine Dome is a cool one -- especially nice as I never have to share it with anyone. Or the ridge over Ostrander Lake. Madera Peak and the associated peaks along that ridgeline. For obscurity I like DAFF Dome.

by giantbrookie
I have so many favorites.
My very favorite is probably Mt Ritter although from so many viewpoints it is Ritter AND Banner and Banner is in fact more attractive from some angles.

Here are a few from north to south that come to mind. I have many more favorites than those on this list, though.
northernmost Sierra: Sierra Buttes. the poor man's Ritter Range dominates the northern Sierra like no other. It can be seen from very far away.

northern Sierra: Round Top. King of Carson Pass territory. It can also be seen from very far away.

north Yosemite: Tower Peak. From a distance or up close this is the prominent individual peak of north Yosemite. The Sawtooth Range collectively is magnificent, but even the most prominent peak of the group (Matterhorn) is not that individually prominent from other angles (ie other than from Bridgeport). After Tower, I like Whorl Mtn and especially Virginia Peak in that area but these are only locally dominant peaks that do not dominate the skyline from very far away.

Middle Yosemite:
Mt Conness. Nice and alpine looking from every angle and visible from fairly far away.
Cathedral Peak. Not so prominent from far away owing to relatively low elevation but dominant within central Yosemite.
Mt Clark. Clarence King was impressed and so has everyone else who has seen it.

Mt Lyell. Absolutely unique appearance with glacier (however much it has shrunk) on the N and quite prominent from other angles. Viewed from E, W, and S, though it is overshadowed by the awesome prominence of Ritter and Banner.

Bear Creek Spire. Simply a classic peak. It rules Little Lakes Valley in spite of some pretty good competition in the area.

Mt Tom. Such a memorable landmark from Bishop and very topographically prominent even if largely non technical.

Mt Humphreys. Best of the Bishop skyline and absolutely wonderful in appearance from everywhere.

SEKI
Mt Darwin. Actually hard to sort out in views from some angles to the west (being blurred with Mendel to some extent) but supreme from the north or east.

North Palisade. This is the first choice of many, but it is somewhat muted compared to Mt Sill when viewed from the east at a distance. It is at its best from the west, actually, as well as from nearby to the north (from Agassiz) or south (from Sill). Again, from the E, Mt Sill is more prominent.

Mt Goddard. Topographically most dominant peak of Kings Canyon. You can see this from everywhere. It is THE feature on the Fresno skyline and it really stands out viewed from nearly any summit in the central and southern Sierra. Although non-technical it is rugged enough and so topographically isolated to really make an impression.

Mt Brewer. topographically prominent and can be seen from a very long range (including some angles from Fresno).

Milestone Mtn. You gotta love that profile and it can be seen from quite far away as above.

Junction Peak. Very underrated in my view. It can be seen from far away, especially to the north and it is suitably rugged from any viewpoint.

Mt Ericsson. It has one weak angle, which is its somewhat wimpy Stegasaurus-backed view from Lucy's Foot Pass. Every other angle is really dominant, especially "end on" from the north or the south. The north angle is especially striking and it is the standout peak on the Kings-Kern divide in this regard. I would consider this "underrated" as is Junction Peak.

Mt Williamson. This is just an enormous, imposing peak, and it is high enough so that it can be seen from the west looming OVER Mt Tyndall when viewed from the Great Western Divide (how on Earth could King have aimed for Tyndall after being on Brewer and seeing Williamson looming in back of it?).

Black Kaweah. No weak angles and it simply dominates the skyline for long distances from everywhere, including my southeastern view from Fresno. To me this peak is king of Sequoia NP.

Sawtooth Peak. My favorite S of Black Kaweah. Nowhere near in the same league as Black Kaweah, but a nice-looking mountain in spite of the fact it really isn't cliffy on the side facing Monarch Lakes.

by lambertiana
A lot of good ones have already been mentioned. I am rather fond of the entire Kaweah ridgeline, either from the east:

Or from the west:

by shuteye
Mathess Crest viewed from astraddle the ridge is visually striking every time. Not visible from the road, sees too many ascents to be really cool, but has to qualify as aesthetically unforgettable in anybody's book.

Let me be a little more specific, places you cannot see from your car window.


You won't get this view of Half Dome from your car window. 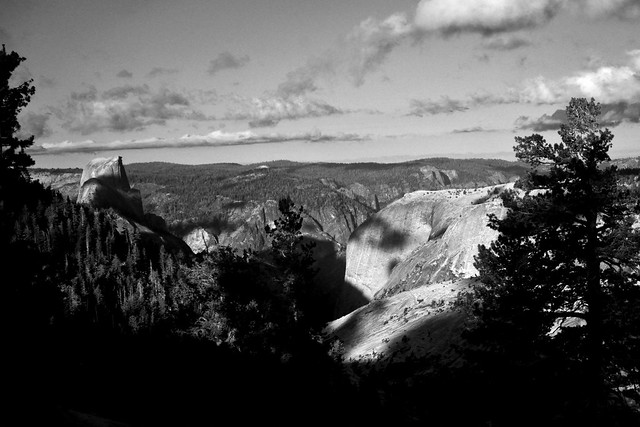 Moving along...anyone say Matthes Crest yet? [ETA: d'Oh! did not see the comment immediately above] 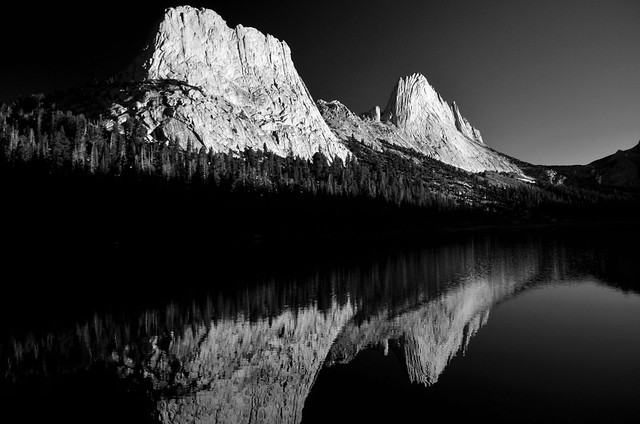 Mathess Crest viewed from astraddle the ridge is visually striking every time. Not visible from the road, sees too many ascents to be really cool, but has to qualify as aesthetically unforgettable in anybody's book.

by creekfeet
I agree that the Kaweah peaks are some of the best to look at. Every time I see them from afar, they look like Mordor. One I haven't seen mentioned that I love is Ball Dome in the heart of Roaring River Country. It shoots it out of nowhere, is easy to get to, and always serves as a good landmark.

by Wandering Daisy
Angel Wings. Great dome viewed from many directions. I have some good photos but my photobucket account is full and I have no time to clean it up right now. Maybe someone else can post a photo.

Finally got my photobucket cleaned up! Three views of Angel Wings.
All times are UTC-07:00
Page 2 of 5
Powered by phpBB® Forum Software © phpBB Limited
https://www.phpbb.com/